Casco Viejo, a UNESCO World Heritage Site and one of the fastest-changing neighborhoods in Central America, is experiencing a boom in meticulous and tightly regulated architectural restoration and gentrification. Happily, many of the elegant buildings in this Panama City neighborhood have become wonderfully atmospheric hotels where feeling “at home” is more than just a sales pitch. Las Clementinas Chambers, Café & Bar is a standout among them.

Built in the 1930s as an apartment building by a woman named Doña Clementina Herrera (hence the hotel’s name), the building, like everything else in Casco Viejo, fell into ruin after this neighborhood was attacked by the US military as part of their search for Manuel Noriega and it ultimately succumbed to squatters and gangs.

Slowly but surely the Casco Viejo neighborhood has been staging an elegant comeback and is now home to some of Panama City’s best restaurants, shopping, bars and, of course, hotels. 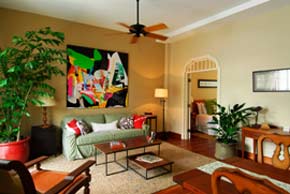 The task of bringing Las Clementinas back to life took three years during which her six apartments were meticulously restored and elegantly appointed. Artisans from Colombia reproduced Doña Clementina’s hand-painted tiles. Antique desks from the old British Embassy were placed in rooms. The hard wood floors and marble accents were restored. Modern amenities like air conditioning and Wi-Fi were added.

Las Clementinas opened in 2010 and one trip through the chic ground floor bistro and bar, past the spacious private garden and up the stairs to the accommodations reveals why they call them “chambers” not suites. All six rooms at Las Clementinas are charming chambers that retain their original apartment layout including a true living room and a fully equipped kitchen.

Each also features a shower lined with those hand-painted tiles. The hardwood floors and potted plants come to life in the sunlight streaming in through massive double-paned windows. The muted tones of the core furnishings let the art and decorative touches, unique to each chamber, really shine. No matter which chamber you choose it will be chicly homey in a loft-like way that will inspire you to dream about living there.

All of this in the heart of Casco Viejo (also called Casco Antiguo), the most compelling neighborhood in Panama City. Luckily, guests at all of the hotels in the Conservatorio group (which includes Las Clementinas, Canal House bed and breakfast, Los Cuatro Tulipanes apartment suites and the soon-to-open 55 room American Trade Hotel) receive a playful and portable mini neighborhood guide which includes walking tours, cheeky recommendations, a bit of history and a fold out map. You will feel so much cooler exploring Casco Viejo with this in your hands rather than a clunky guidebook.

Neighborhood pleasures during my time in Casco Viejo included Veggie Moon restaurant which was opened in November of 2011 by Claudia LaForgia, the owner of nearby Diablicos, which serves modern Panamanian food. Despite the name, Veggie Moon is not entirely vegetarian with fish, seafood and homemade pastas also on the menu in the hands of a chef straight from Sardinia. I enjoyed the best ravioli I’ve ever eaten and the Panamanian Vice President and his wife looked pretty pleased as well as they dined at a nearby table. In 2013 Claudia plans to open two more restaurants in Casco Viejo so stay tuned.

Though microbreweries are still a new concept in Central America Panama’s La Rana Dorada (The Golden Frog) is leading the way with two brewpubs in the city including one in Casco Viejo. Guests receive a free flight of beer (including pale ale, pilsner, porter, and blanche) so you can choose your favorite (or favorites). Don’t miss their plantain pizza. 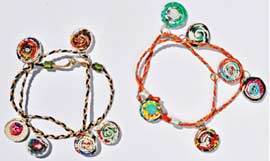 It’s fair to say that Casco Viejo has more than its share of run-of-the-mill souvenir shops and they are best avoided. But Casco Viejo also has one of the classiest places to get your gift list handled. It’s called Papiro y Yo and it’s run by a charming woman named Zaira who creates new designs and applications for Panama’s traditional handicrafts and materials. While other stores are hawking exactly the same cheaply made Panama hats and factory-made jewelry,  Papiro y Yo offers elegant clutches made using indigenous reed weaving techniques, hand-crafted jewelry in contemporary styles, even home accessories that incorporate traditional materials and methods—and all at very reasonable prices.

You can even get your Panama Canal fix right in Casco Viejo at the International Panama Canal Museum ($2 per person, closed Monday, all exhibits are in Spanish) which rivals the more famous canal museum at the Miraflores Visitors Center.

At the end of such full days, it felt good to return “home” to Las Clementinas, sit back on my elegant sofa or on my private balcony and enjoy a cup of French press coffee from my very own kitchen.

Rates from: $280 double occupancy including full ala carte breakfast and valet parking

Here’s more about Hotels in the Americas