We’ve crossed nearly 60 borders in the Americas so far on our little road trip and they’re usually dead boring. But not this one. When you cross between Ipiales, Colombia and Tulcán, Ecuador you can visit two totally travel worthy sites, the Disney-esque Las Lajas Sanctuary on the Colombia side and a massive topiary filled cemetery on the Ecuador side, in a single day. 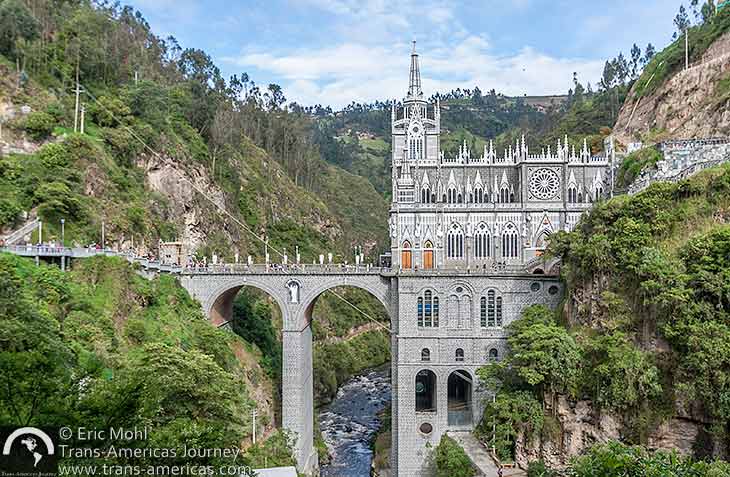 Las Lajas Sanctuary in Colombia near the border with Ecuador.

Less than 10 miles (16 km) from the border with Ecuador you will find the most elaborate and unexpected church in Colombia. The Gothic revival style Las Lajas Sanctuary dominates a narrow gorge and was built between 1916 and 1949. The massive stone church rises 330 feet from the bottom of the canyon where the Guáitara River rages. The elaborate Roman Catholic church is accessed via a 160-foot (48 meter) long stone foot bridge. 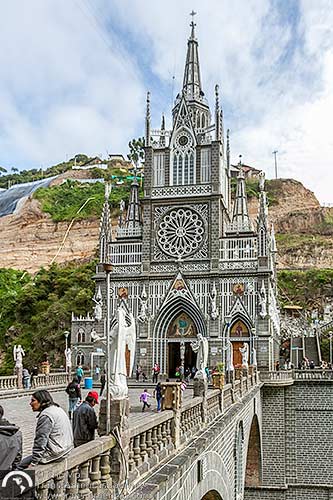 The Las Lajas Sanctuary may look a bit Disney-esque, but it’s a serious pilgrimage site.

But the Las Lajas Sanctuary isn’t just famous for its location and architecture (which looks like something straight out of Europe, or Disneyland). In 1754, an indigenous woman named Maria Mueces and her deaf-mute daughter, Rosa, were walking through the gorge when Rosa wandered into a cave and suddenly spoke.

What the previously deaf and mute woman said was that she’d seen a woman carrying a baby. This was eventually interpreted as a sighting of the Virgin Mary and the deaf-mute woman’s sudden ability to speak was considered a miracle. Now thousands of pilgrims visit Las Lajas each year. 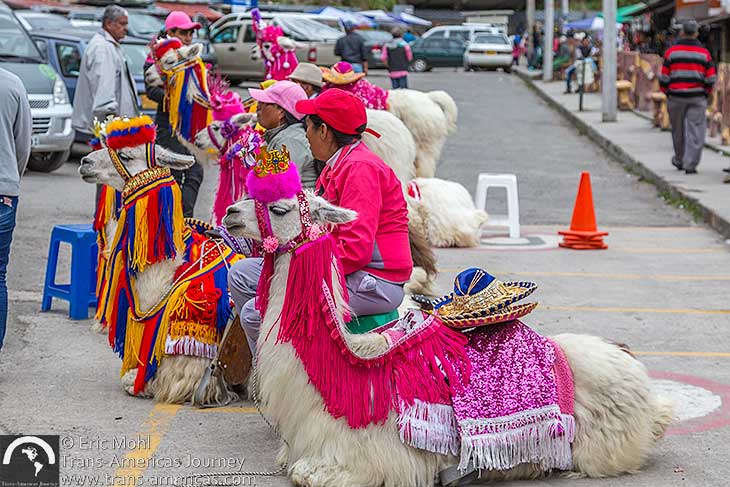 We’re not sure what photo opps with dressed up llamas have to do with purported miracles, but it’s a thing at Las Lajas Sanctuary.

When we were there a cable car was in the final stages of construction. If you visit now you can ride the teleferico instead of walking up and down to the sanctuary. You will also find the cheapest bed in Colombia at the sanctuary where you can sleep in a spartan nun’s room at a nearby cloister for less than US$10 for two people 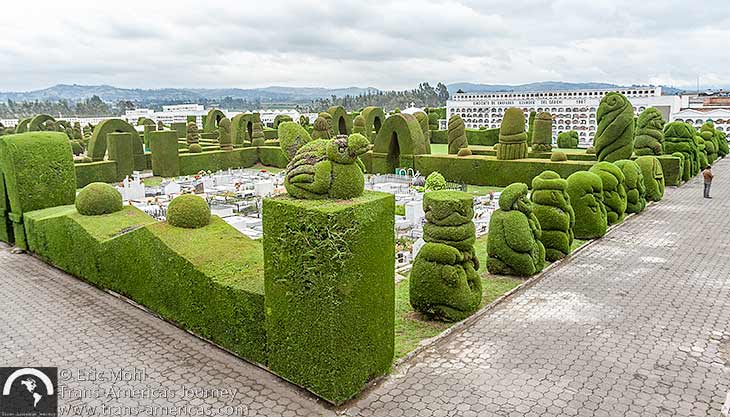 The topiary-filled Municipal Cemetery in Tulcán, Ecuador near the border with Colombia.

About 5 miles (8 km) from the border on the outskirts of the town of Tulcán you’ll find the Municipal Cemetery of Tulcán. 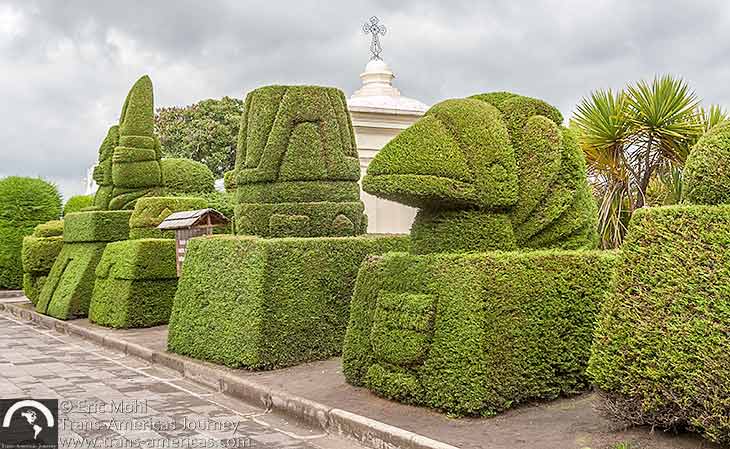 Flora and fauna and Aztec and Egyptian imagery inspired the elaborate topiary in the Municipal Cemetery in Tulcán.

In the 1930s, local gardener Josè Maria Azael Franco began sculpting the cypress bushes that grow in the cemetery where he worked. Inspired by Ecuadorian flora, fauna and indigenous cultures, including animals from the Galapagos Islands plus themes from Roman, Incan, Aztec, and Egyptian culture, Mr. Franco shaped the plants, which can live for 500 years and grow more than 100 feet (33 meters) tall. 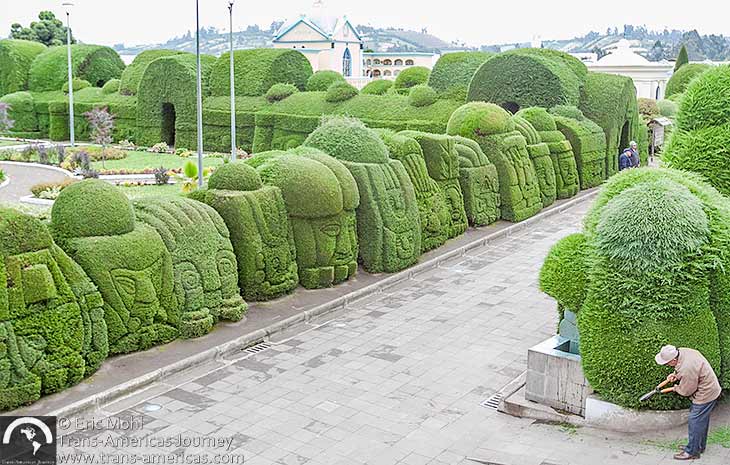 A gardener keeps things tidy in the Municipal Cemetery of Tulcán.

Over the years every cypress was transformed until the cemetery was, in Mr. Franco’s own words, “so beautiful it invites one to die.” The Municipal Cemetery of Tulcán now has more than 100 enormous, intricate creations covering the three-acre site, which some of Mr. Franco’s sons now maintain following the creator’s death. 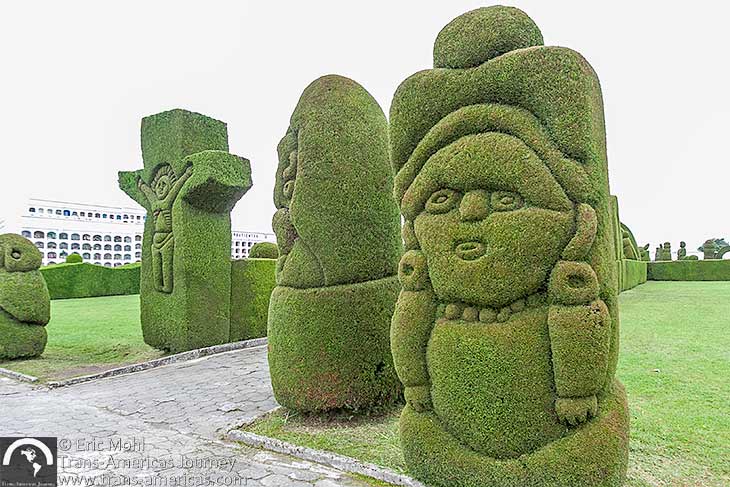 We loved the topiary crucifix in the Municipal Cemetery in Tulcán.

For more about these cross-border sites read our story about them for Atlas Obscura, where you’ll find even more details about what could be the most interesting border in the Americas. 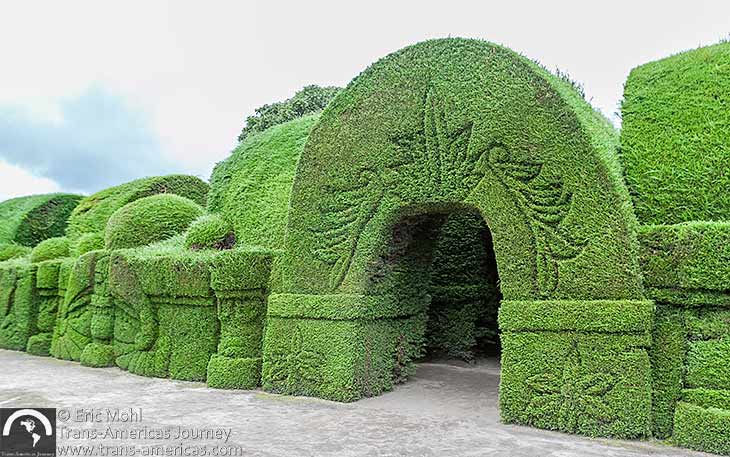 You can walk through this topiary tunnel in the Municipal Cemetery in Tulcán.