We spent time in dozens of US national parks as we traveled through the United States so we can say with some degree of expertise that all of them are amazing in their own unique ways. Yellowstone has geothermal marvels, Denali delivers epic peaks, Crater Lake shows off the power of volcanoes. Then there are national parks that have it all, like Lassen Volcanic National Park in California. 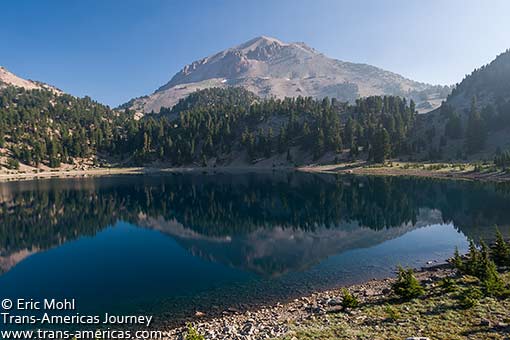 Founded on August 9, 1916 Lassen Volcanic National Park covers 106,452 acre (43,080 ha) and packs in geothermals and summits plus all four types of volcanoes. Over three days of utterly perfect temperatures we manage to explore most of this diverse park from our base in the Summit Lake North Campground. 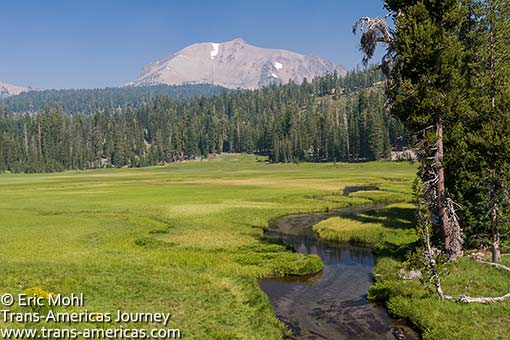 Warming up on the Cinder Cone Trail

As a warm up before tackling 10,457 foot (3,187 meter) Lassen Peak, we decided to climb up Cinder Cone. During the drive to the trailhead we spotted a honey colored black bear a few hundred feet off the road. It was busy ripping apart dead tree trunks in search of a snack and hardly notices us as we passed by. 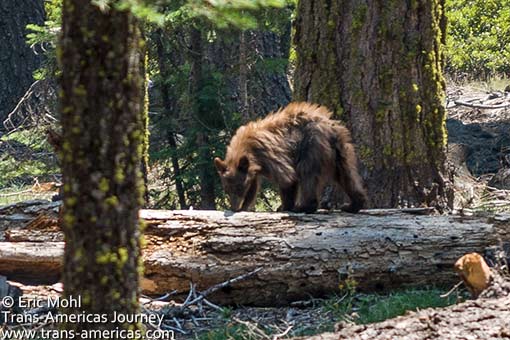 This bear was hunting for food inside rotting logs near the road that leads to Cinder Cone in Lassen Volcanic National Park in California.

The Cinder Cone trail starts off pleasantly enough (except for the disturbing signs warning visitors about river otter attacks in the area), however, the route becomes very steep and very exposed at the base of the Cinder Cone itself. 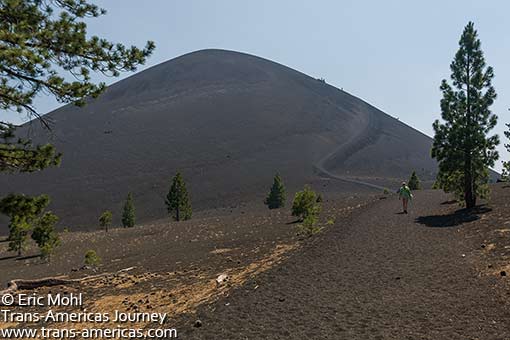 Karen on the Cinder Cone trail in Lassen Volcanic National Park in California.

To make matters tougher, the trail runs through deep black cinders, which makes it feel like you’re walking through sand as you inch our way up the side of the dormant cone (two steps forward, one sliding step back, etc.). As usual, the harder the walk the greater the reward and at the top Cinder Cone lies a classic deep crater with a trail right down into it and a lovely path around the rim. 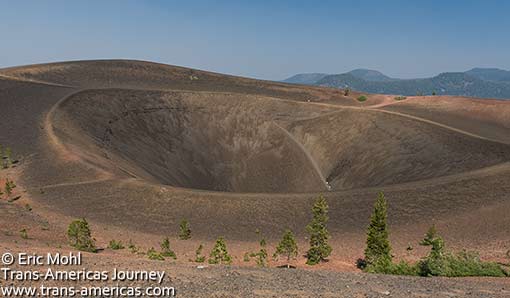 Reach the top of Cinder Cone trail and your hike still isn’t through. This loop trail takes you around and into the crater itself.

Panoramic view from the top of the Cinder Cone trail in Lassen Volcanic National Park in California. See a larger version of this photo.

The next morning it was time for Lassen Peak. The 5 mile (8 km) round trip trail was busy but not packed–we saw maybe 40 other hikers—and, it must be said, it was an easier walk than we’d anticipated, perhaps because Cinder Cone was so much tougher than we’d expected. 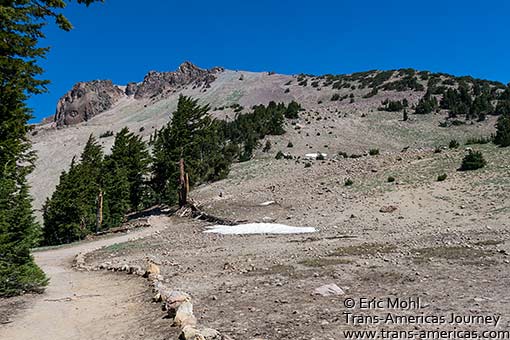 A stretch of trail about half way up Lassen Peak.

At the top we found a couple of flat rocks, the perfect place to break out our gourmet picnic of bbq pork sandwiches on onion rolls, grilled corn on the cob, and boiled then grilled red potatoes leftover from our campsite dinner the night before. 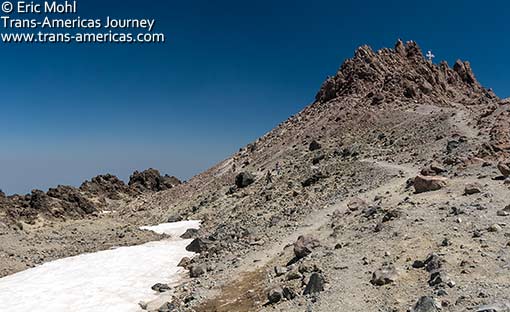 The summit of Lassen Peak.

As we ate, thousands of butterflies appeared all of them flying around the peak in the same clockwise direction. It was something we’d never seen before and it reminded us of what it feels like when we’re SCUBA diving in a swirling school of fish—lucky and bewildered. Less surprising were the swarms of chipmunk beggars who had clearly been spoiled by far too many human handouts. 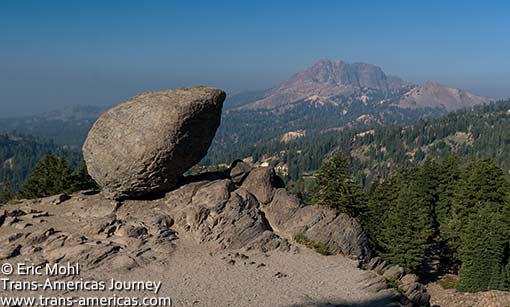 A view from the trail up Lassen Peak.

On the way down the Lassen Peak trail a doe and two frisky fawns crossed the trail right behind us before scampering off into a small meadow with mom in perpetual pursuit of her two energetic wanderers. 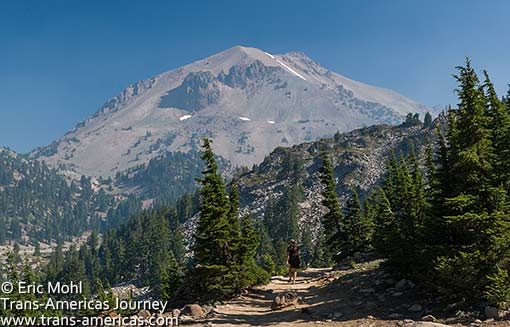 Our final day in Lassen was reserved for the Bumpass Hell trail where we learned that there really was a Mr. Bumpass (we presume he pronounced it Bum Pass) who used to guide visitors among the area’s sprawling fumaroles and boiling pots until he broke through the crust one day and fell into a scalding thermal feature burning his leg so badly that they had to cut it off, hence, the “Hell” part of the trail name.

Before we even reached the geothermal area we could hear the action—a kind of airport runway jet engine roar and hiss that seemed to be coming from all directions at once. After a few minutes of stupidly looking up at the sky trying to spot the planes that must be making all that racket we finally figure it out: we should be looking down. 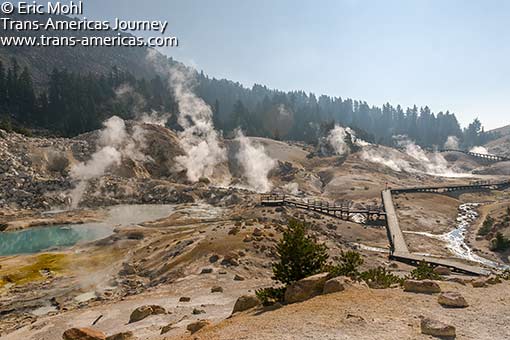 The trail network through the geothermal areas of Bumpass Hell.

The Bumpass Hell area is made up of an array of steam vents and patches of bright yellow sulphur and boiling pools full of colorful water and putty-colored mud. It’s every bit as impressive as what we’ve seen in Yellowstone National Park (minus the bison and the elk, of course). Plentiful and blunt warning signs made it clear that if we didn’t watch our step and stay on the trail we could end up just like Mr. Bumpass. 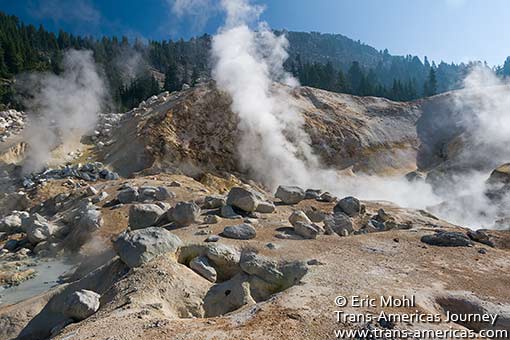 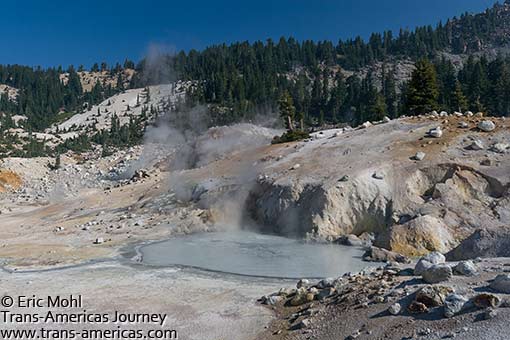