The Last of the Lacandon? – Nahá & Metzabok Villages, Mexico

The Lacandon people of Mexico are the descendants of the Mayans who fled from what is now southern Mexico and northern Guatemala in order to escape the Spanish in the 1500s. Since then the Lacandon have survived in an ever-shrinking area of Chiapas called the Lacandon Jungle. But their numbers are dwindling (some say there could be as few as 800 Lacandon left). Is this the last of the Lacandon? 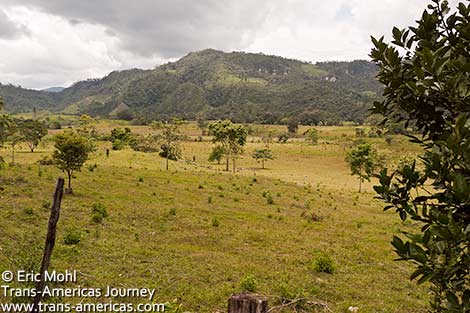 Almost all of the land surrounding the protected Lacandon Jungle has been cleared for ranching or logging.

Changing times for the Lacandon

Some Lacandon communities had no contact with the “outside world” until the mid-20th Century but things have changed fast since then. Inter-marriage, a yellow fever outbreak, the lure of the big city and general loss of the jungle areas that sustain the traditional Lacandon way of life mean that fewer and fewer Lacandon people are being born and even fewer are learning and practicing their traditional ways.

Even in what are considered to be Lacandon villages it’s common to see inter-cultural families. Some Lacandon families send one or more children to the nearest Mexican city to make pesos which are increasingly used in this society which once functioned just fine without the concept of money. As happens so often, some Lacandon kids are lured out of their villages in search of things like TVs and motorbikes. 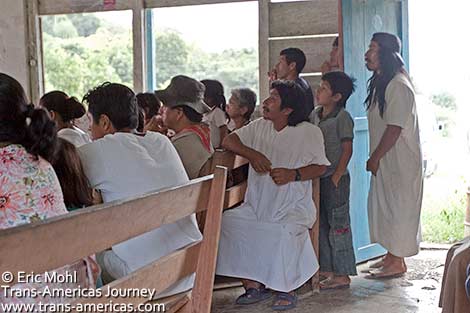 A community meeting in the Lacandon village of Nahá.

Then there’s the jungle problem. The Lacandon–not unlike the jaguar–require healthy jungle and lots of it to sustain their gentle and effective form of agro-forestry which includes crop rotation and hunting and gathering. Mexican ranchers and loggers, on the other hand, require enormous swaths of land to graze cattle on and extract timber from and these interests have been able to take over huge tracts of jungle only to clear it for timber and pasture land.

Today there may be as few as 800 Lacandon left in the world and all of them are in Chiapas, Mexico.

In 1971 groups concerned with the continuation of Lacandon traditions and the shrinking jungle environment helped persuade the Mexican government to carve out and protect the Lacandon Jungle, a 1.5 million acre (614,000 hectare) chunk which is a haven for flora and fauna and home to the Montes Azules Biosphere Reserve and important Mayan archeological sites including Yaxchilan and Bonampak. 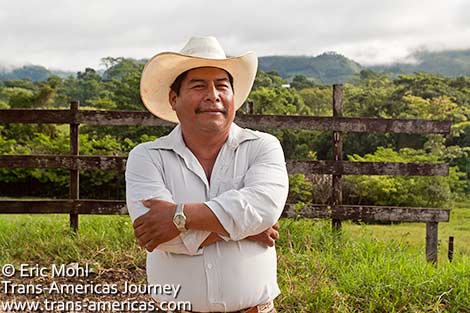 A friendly local rancher we stopped to chat with on his cleared property on the outskirts of the protected Lacandon Jungle.

The last of the Lacandon?

Three of the most vibrant remaining Lacandon settlements are Nahá, Lacanja Chansayab, and Metzabok which are each believed to be locations where Lacandon gods traditionally lived. In these areas, deep within the Lacandon Jungle, villagers and increasingly concerned anthropologists and environmentalists are working to preserve and build upon what’s left of Lacandon traditions. 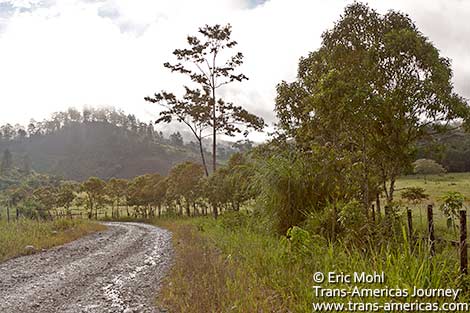 Jungle cleared for cattle ranches along the road toward the Lacandon village of Nahá.

One of the longest-standing and most effective of these groups is Na Bolom which, since unorthodox artistic and philanthropic free spirits Frans Blom and Trudi Duby Blom founded it in 1951, has been primarily concerned with preserving the Lacandon way of life and their jungle areas while ensuring they (and other local indigenous groups) benefit from modern services like health care and education on their own terms.

Recognizing that the outside world is coming in whether they like it or not, these communities have chosen to control local tourism in their own way and you can now visit most of these remote villages as a traveler and enjoy camping, cabins or homestays with the Lacandon as well as hiking and canoeing in their lovely jungle. The non-profit Na Bolom can arrange comprehensive trips to Nahá and Metzabok out of San Cristobal de Las Casas and these trips directly benefit these communities and support Na Bolom’s work on behalf of the Lacandon in general. 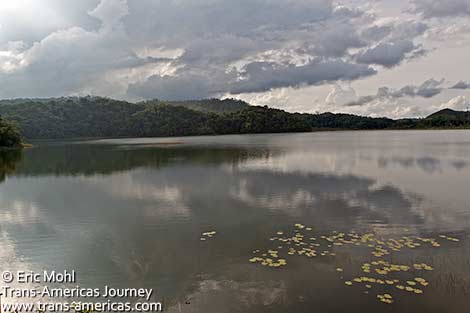 Nahá Lake has invitingly crystal-clear water…and a lot of crocodiles.

Scorpions, magic rocks, and the underworld of the Lacandon

The heart of the village of Metzabok, where fewer than 30 Lacandon families live some of them running a small community tourism project which includes a handful of bungalows, is Laguna Tzibana. When we visited Metzabok we headed out to cross the lake in a small paddle boat. 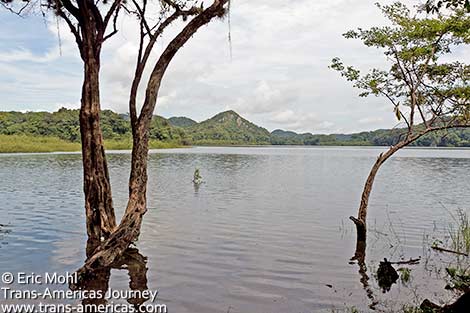 Beautiful Laguna Tzibana in the Lacandon village of Metzabok.

About midway across the lake we realized that we were not alone. A scorpion was also in the tiny boat with us and we both jumped up and tried not to flip the boat while attempting to kill or evict our dangerous little hitchhiker. Eric finally squashed it and, after a quick survey for other stowaways, we continued on our way. 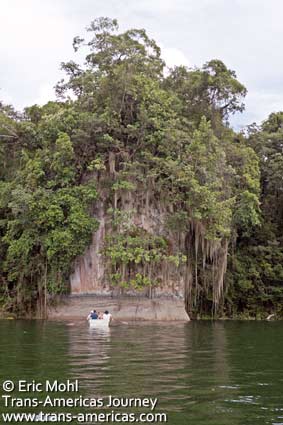 The Lacandon believe that this rock on Laguna Tzibana is a god.

Our destination was a very special rock on the far bank which features red hand prints and other paintings. Our Lacandon guide explained that the rock is believed to be a god and new symbols appear on it after storms. A nearby cave is also believed to be one of many pathways to the underworld that the Lacandon must navigate after death. 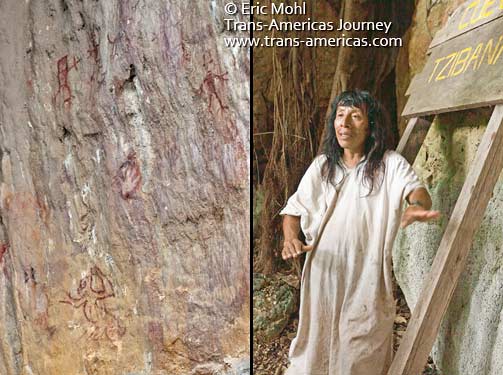 Our Lacandon guide, in the traditonal wite tunic, explained that the petroglyphs on the left appear on a rock face after storms then he took us into a cave believed to be a pathway to the underworld which all Lacandon must navigate after death.

We were honored to be invited to visit the village of Nahá as well, along with a group from Na Bolom as part of a very special ceremony to re-bury Na Bolom founders Frans Blom and Trudi Duby Blom in the Nahá cemetery next to legendary Lacandon leader and activists Chan K’in Viejo (who died in 1996). It’s where Frans (who died in 1963) and Trudi (who died in 1993) always wanted to be buried and the Nahá villagers believe that reuniting the three old friends will enable them to “continue their conversations” even after death.

Our time in the Lacandon Jungle coincided with some very heavy rain. Our video, below, lets you see one of the most epic downpours we’ve ever experienced without getting wet. This is why they call it a rain forest.

All that rain made for some very high rivers too which raged past us as we drove deeper and deeper into the Lacandon Jungle. 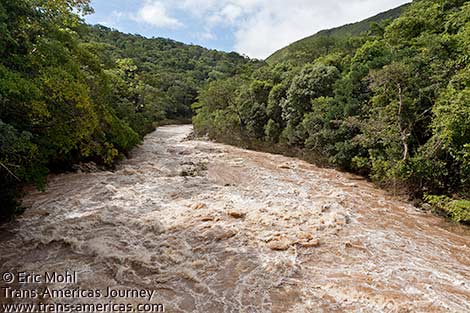 Rivers swollen by heavy rain in the Lacandon Jungle.