There are only three cities in Nicaragua: Managua, the capital, is a chaotic, crumbling city with few reasons to linger (if you must stay there, check out our city travel guide to hotels in Managua). Granada is gorgeous but it’s brimming with gringos. That leaves León. Our León city travel guide tells you why we loved Nicaragua’s second-largest city. 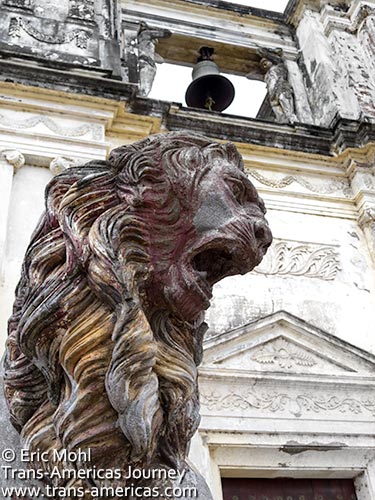 León is named after its Spanish counterpart city. As every Spanish 101 student knows, león means lion in Spanish.

León is hot. We’ve started saying “León hot” instead of “Africa hot”. It may not have much colonial beauty to speak of. Much of the food leaves a lot to be desired. But what León lacks in obvious charms it makes up for in sheer authenticity, which is why it became our favorite city in Nicaragua.

First impressions of our favorite city in Nicaragua

Our first impression of León was the heat which somehow combines the searing, life-sucking dryness of the Sahara with the kind of humidity that means that every activity (including breathing) makes you sweat.

Our second impression of León, however, made us stick it out even in the thick of the pre-monsoon heat. While Managua and Granada both have disturbing, unavoidable, and very stark divisions between the haves and the have-nots, in León that gulf seemed less pronounced. There was no gringo area. There were no gated communities. No one’s car or bike seemed that much nicer than the next person’s. Everything and everyone (for the most part) seemed to exist in the humble middle ground espoused by the country’s socialist government.

A large population of Nicaraguan college students and foreign aid workers and volunteers gives León a pleasantly hopeful vibe as well. Though you wouldn’t know it to look at the sleepy city today, León was the on-and-off capital of Nicaragua until 1858 when Managua got the title once and for all. 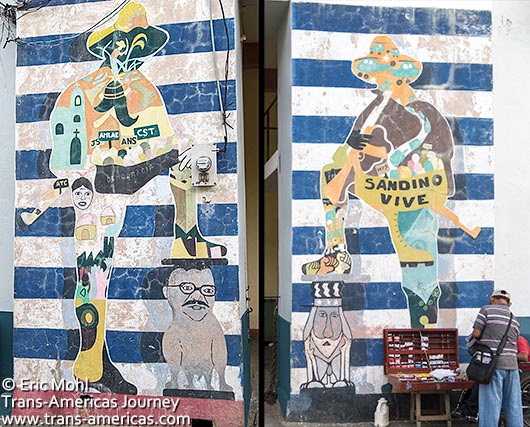 This street art in León shows revolutionary Augusto César Sandino with his foot on top of dictator Anastasio Somoza Debayle (left) and on top of Uncle Sam.

What to do in León (besides sweat)

The main sight in León is the stately Cathedral of León. Completed in 1814, it was designed by a Guatemalan in a style that bridges Baroque and Neoclassical architecture with touches of Gothic and other styles thrown in as well. It was consecrated by Pope Pius IX in 1860. 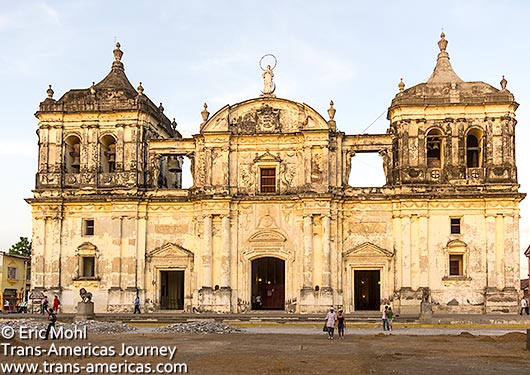 The cathedral in León is one of the largest in the Americas and is the final resting place for many, including Nicaraguan poet Rubén Dario.

It’s so well-built that the massive cathedral has withstood earthquakes, volcanic eruptions, and worse. In 1824 cannons were installed on the cathedral’s roof when conservative forces laid siege to León, in 1979 the cathedral was used as a stronghold against dictator Anastasio Somoza Debayle and the guerilla fighters of the Sandinista National Liberation Front (FSLN) also used the cathedral for military purposes. 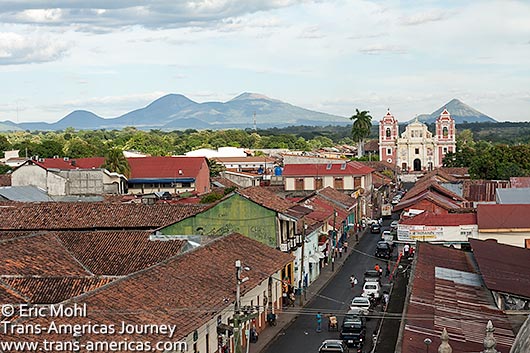 The streets of central León with the cathedral in the distance and the chain of volcanoes that ring the city beyond that.

Official guides (Spanish only) hang out inside the cathedral, which was made a UNESCO World Heritage site in 2011, to make sure you take in the most important aspects including the final resting place of Nicaraguan poet Rubén Darío. Make your way to the roof to check out the fantastic views over the city and beyond to the volcanoes which ring it. 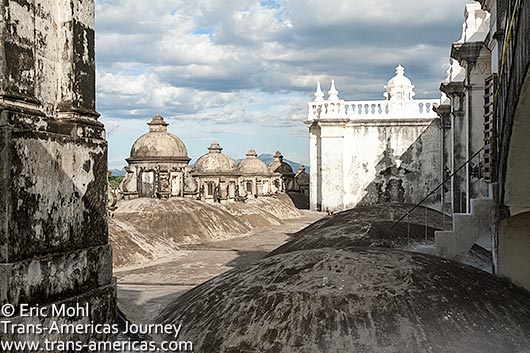 You can visit the roof of the cathedral in León for a great perspective on the mixed architecture of the building and awesome views of the city and the volcanoes that ring it. 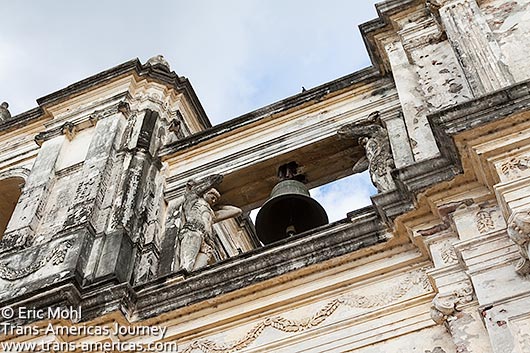 One of the bell towers of the cathedral of León.

Nicaragua is not known for its museums, it’s true. However, León is home to the Centro de Arte Fundacion Ortiz-Gurdian (free on Sunday for locals and foreigners) which is the best museum in Nicaragua and offers the most compelling collection of modern and religious art from Latin America that we’ve seen since some of the museums in Mexico City. 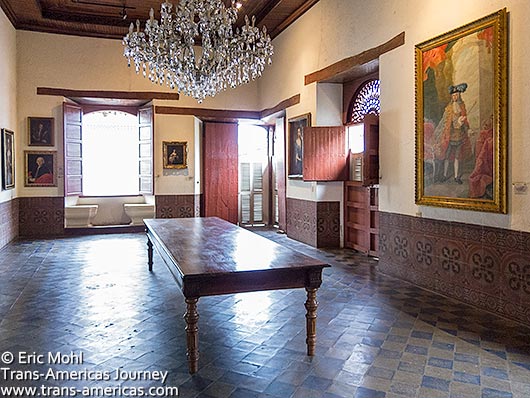 One of the many elegant Colonial era rooms that have been turned into treasure-filled galleries at the Centro de Arte Fundacion Ortiz-Gurdian in León.

The art is displayed in four adjacent restored Colonial homes which would be worth a visit in their own right even if every wall and courtyard wasn’t filled with art. Opened in 2000, profits from the foundation support a breast cancer awareness, screening, and treatment center in Nicaragua. 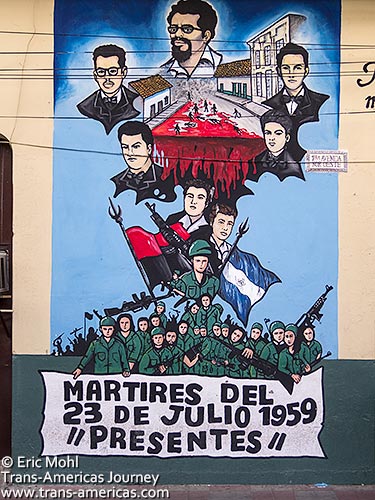 A mural in León commemorating the July 23, 1959 massacre of students which occurred here at the hands of the military.

As you’re wandering around between these sites be on the lookout for street murals including one commemorating the massacre of student protesters. Find relief from the heat by catching a cheap subtitled movie in the blissfully air-conditioned movie theater. 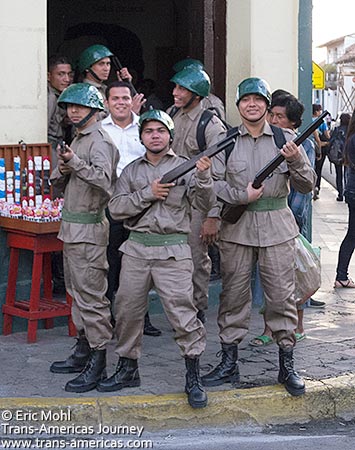 College kids in León dressed up as soldiers as part of the annual re-enactment that commemorates the July 23, 1959 massacre of students in the city. 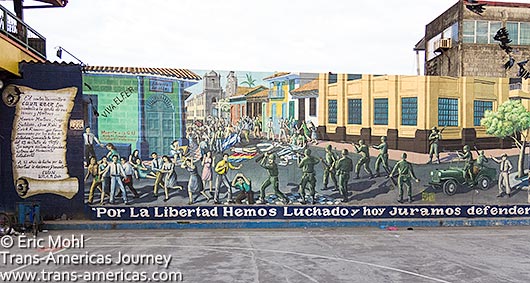 Another mural in León in memory of the student martyrs who were killed by the military on July 23, 1959.

And that’s just the beginning. For even more travel options (from volcano boarding to rum tours) check out our post about what to do around León.

Where to sleep in León

León attracts far, far fewer visitors than its more popular sister, Granada. However, you won’t have the place to yourself.  Most of the travelers who spend time in León are backpackers and there are dozens of hostels in the city, some of them offering free bed bugs.

We got lucky and happened to see a flyer for Harvest House while checking out the bulletin board in the office of Quetzaltrekkers, a non-profit tour company. We called the number on the flyer and set up a time to meet Harvest House creator and manager Jason Greene, a smart, surprisingly young man from North Carolina.

Jason proudly showed us around the sprawling home he rented and radically upgraded. It was spotlessly clean, brightly painted, comfortably furnished, and had a huge shared kitchen. Rooms, which range from singles with shared bath to small private apartments, were irresistible (from US$15 per night or from US$150 per month) and we booked a double room with shared bath for a month, spending less and getting more than we would have in any hostal. Jason also runs Buena Vista Guest House in Matagalpa, which should be your address in that great town as well.

Where to eat in León

Though we had a kitchen in Harvest House we did eat some meals out in León. Your main choice is going to be fritanga from one of the dozens of women selling this ubiquitous dish from bare-bones street stands. The meal involves some sort of grilled meat, a scoop of gallo pinto (rice and beans), and probably some grated cabbage salad. Fritanga is not gonna win any culinary awards but it will fill your belly and it’s cheap.

We wanted to kiss the French/Dutch owners at Pan y Paz French Bakery where we got delicious loaves almost daily. But the real food find was El Desayunazo which, as the name implies, rocks the breakfast menu. Portions are huge, there’s a wide selection of options (including an epic fruit salad and proper pancakes), the coffee is bottomless, and price tags hover around the US$2 mark. 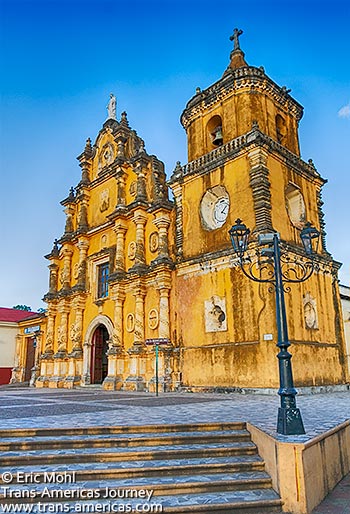