The full name of this Andean city which was founded in 1548 is City of the Immaculate Conception of Loja. Thankfully, everyone just calls it Loja. It’s one of the oldest cities in Ecuador and one of the most popular choices for expats. Loja was also the first city in Ecuador to get electricity thanks to its hydroelectric project and the city continues to excel at renewable energy (you can tour the city’s wind power station). 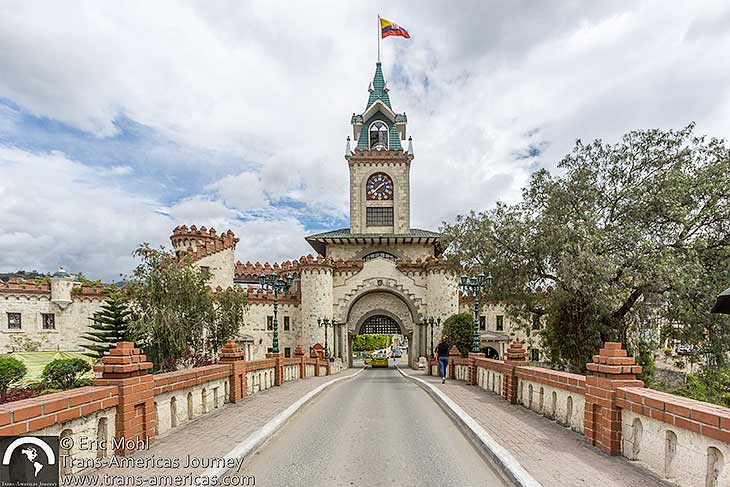 The King of Spain gifted this odd gate to the city of Loja in 1571.

Other things to see in Loja include the Puerta de la Ciudad city gate which includes Loja’s coat of arms and looks like something ripped off a Bavarian castle and transplanted in Ecuador. King Felipe II of Spain presented the gate to the city in 1571 and it’s currently home to some art galleries. You can also climb the clocktower for views over the city. 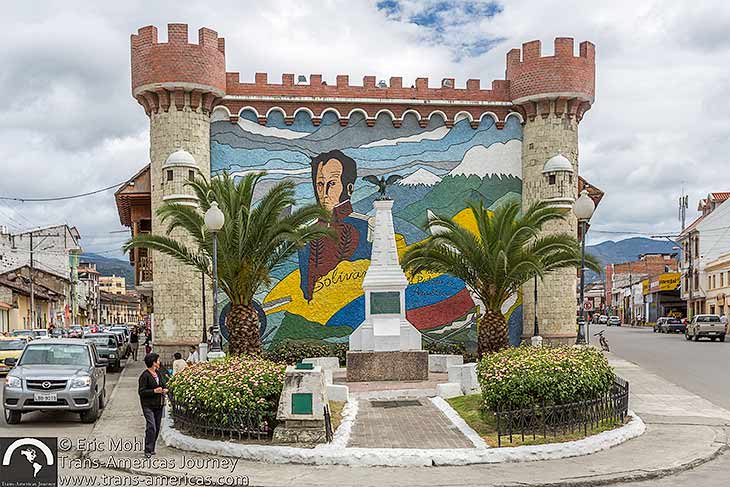 Latin independence hero Simón Bolívar was in Loja (of course) and there’s a mural in town commemorating that fact. You can also still see some historic wood structures on a small stretch of Lourdes Street. A cable car connecting central Loja to Pucará Hill park and San Sebastián was in the works at the time of writing. 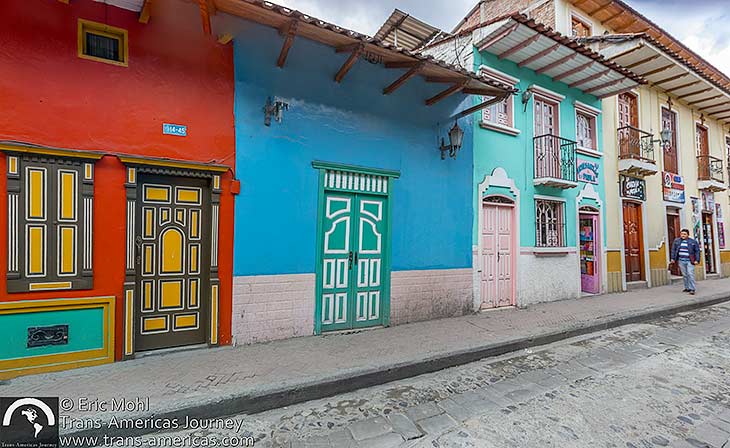 There are a number of churches in Loja and an odd orange stripe on the sidewalk leads visitors on a self-guided walking tour past many of them. Loja also has the oldest public botanical garden in Ecuador and the 17 acre (7 hectare) Jardín Botánico Reinaldo Espinosa is full of trees and more than 800 other types of plants. But we had an even bigger date with nature in mind. 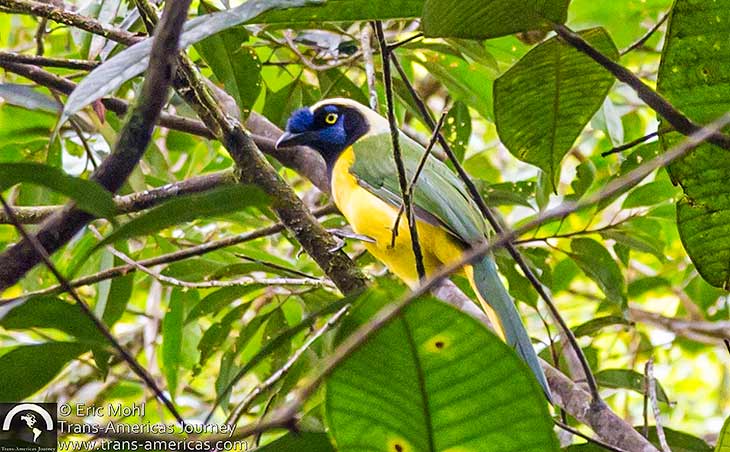 We saw many Green Jays in Podocarpus National Park in Ecuador.

We were in Loja primarily as a base for visiting Podocarpus National Park (free). Named after a rare type of pine tree, Podocarpus is located about a 1.5-hour drive from the city and it’s essentially two parks in one. The park entrance on the Loja-side of the mountains is located in cloud forest and cold high-altitude páramo rising above 11,000 feet (3,350 meters) while the other part of the park accessed from the town of Zamora on the far side of the mountains are essentially the warmer upper highlands of the Amazon Basin located at around 4,300 feet (1,310 meters). 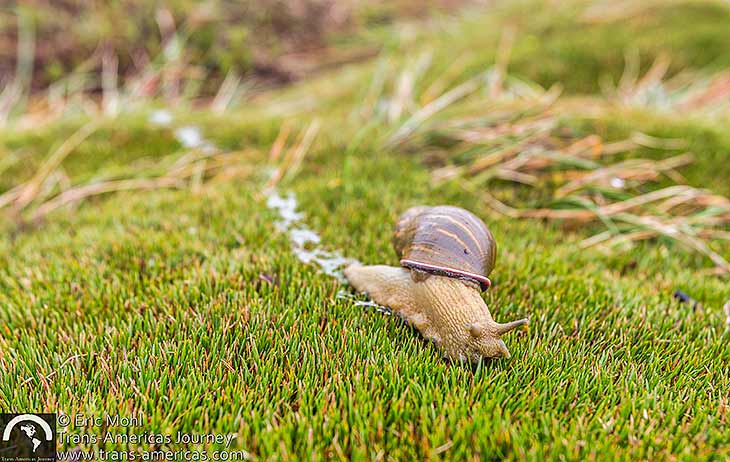 Many species, including slugs, thrive in the diverse habitats in Podocarpus National Park in Ecuador.

These very different climates allow an extremely wide variety of flora and fauna to flourish in Podocarpus National Park, including thousands of different types of trees and plants (including, presumably, that rare type of pine tree that the park is named for), nearly 600 types of birds, jaguars, mountain tapir, and a population of spectacled bears. That diversity earned Podocarpus National Park designation as a UNESCO Biosphere Reserve in 2010. 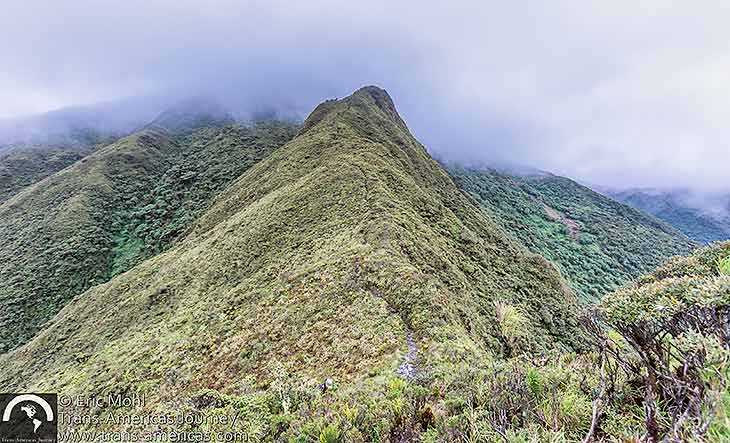 A foggy trail view in the upper part of Podocarpus National Park in Ecuador.

After entering the Highlands section of the park we checked out the ranger station, the free campground, and the rustic huts where visitors can stay. From there, we hiked a short trail to a waterfall with a small beach that’s very popular with local families on weekends, before heading out on the Los Miradores trail. 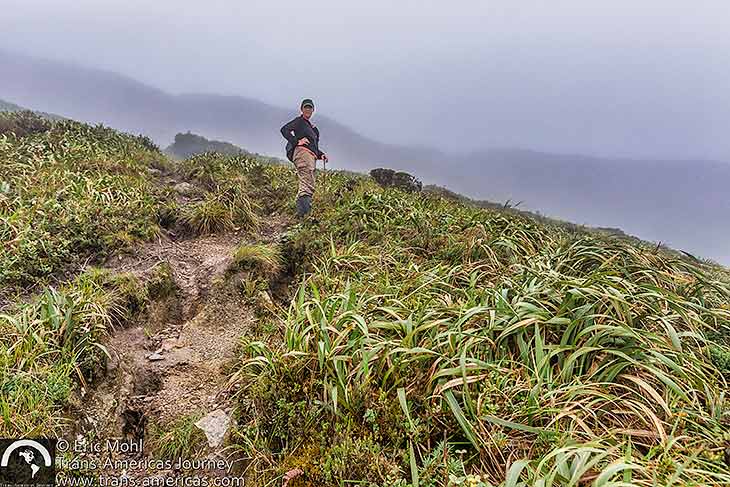 Karen on a muddy, steep trail in the high-altitude, cold, rough páramo landscape in the upper part of Podocarpus National Park.

This was, by far, the toughest 3 mile (5 km) walk we’ve ever done. Ascending from 8,800 feet (2,700 meters) to 10,800 feet (3,300 meters), the trail was steep, muddy, rocky, narrow, and slippery. The route was so treacherous that there were ropes in some sections to help hikers along. It took us four hours to complete the trail. Along the way, we saw a few small birds and the odd local páramo which has lots of ground bromeliads but none of the frailejon plants we’ve come to expect in the páramo. 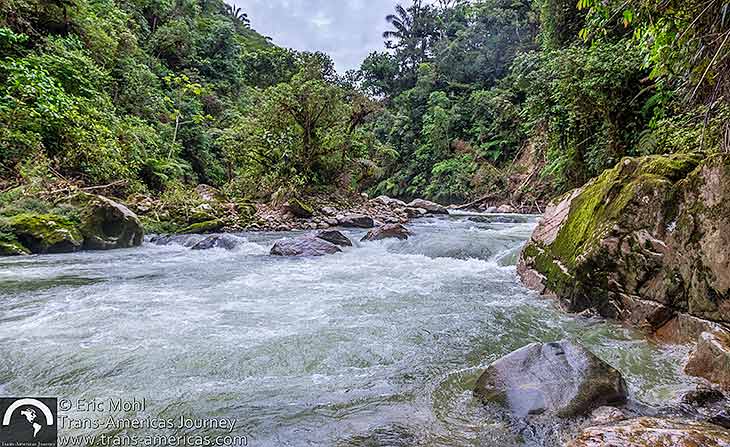 Lush vegetation and plenty of water in the lower part of Podocarpus National Park. 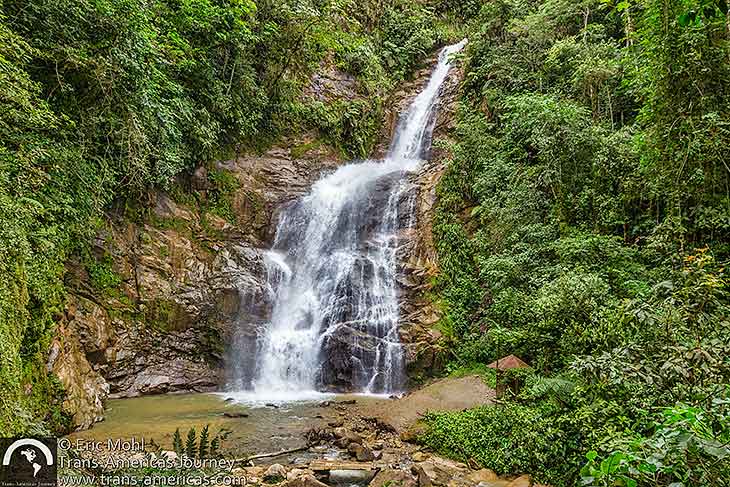 The following day we entered Podocarpus National Park via the other entrance near the town of  Zamora and did a quick walk to the waterfall pictured above.

Where to sleep in Loja 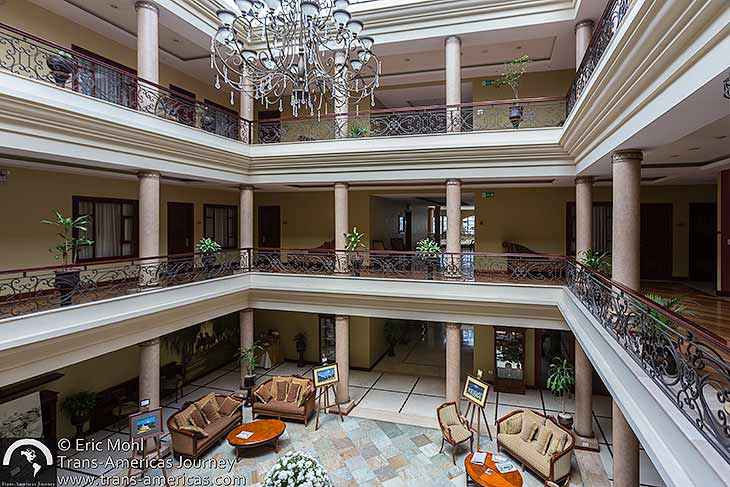 In Loja, we stayed at Grand Victoria Hotel which is a polished business boutique option with all the bells and whistles located right in the center of the city.