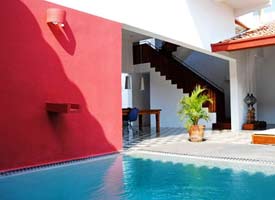 The Spanish settled the lakeside city of Granada back in1524, making it the first European city established in The Americas. A few volcanic eruptions, earthquakes, invasions and periods of neglect aside, Granada has been a treasure of Colonial architecture and charm ever since. Now the city is also home to Los Patios Hotel, one of the most imaginatively modern new hotels in Central America and a bargain to boot.

In 2007 Ingaborg and Erik Winther bought two plots of land, razed the dilapidated homes on them and started fresh–really fresh. While most hotels in Granada (and there are many) follow the prescribed “keep it Colonial” model when it comes to architecture and interior design, Los Patios took its inspiration from Scandinavia, not Spain.

Over the next four years the dusty lot was turned into a breezy indoor/outdoor temple of minimalism by Danish/Spanish architect Maria Gomez-Guillamón and Danish interior designer Malene Hasse. Farg & Form lamps were imported from Sweden (along with the electrical plug adaptors every single one of them requires), AXOR bathroom fixtures were installed and even when items were crafted or purchased in Nicaragua they were given a twist.

The sleek wooden furniture in the guest rooms was designed by Ms. Hasse but built here. Antique floor tiles were purchased in Granada and laid everywhere in a series of understated designs. Local craftsmen created massive built-in cement sofas and storage areas with crisp angles and unexpected splashes of color. Antique furniture and accessories were also purchased and then used in unexpected ways. For example, a small bar in the central common area of the hotel is perfectly accessorized with a classic blender, an antique wooden pestle and a bottle of  Flor de Cana —Nicaragua’s award-winning rum.

Opened in April of 2011, Los Patios is Ingaborg’s first hotel but it doesn’t suffer from any freshman-effort short comings.  Service is attentive and capable. Every corner of the hotel is fully finished and functioning. Even the location is a winner. Los Patios is a few blocks outside the city center (which is already crammed with hotels) in a neighborhood that’s still a neighborhood. Central Granada’s La Calzada pedestrian street, lined with outdoor cafes, bars and restaurants, is just a five minute stroll away. 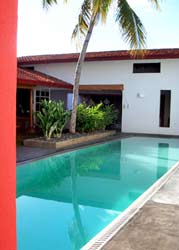 Los Patios has five rooms all featuring antique tile floors, spacious bathrooms with natural light, traditional carved and painted wooden masks and delicious Hay bedding. The large upstairs suite also has an enormous XOP bathtub and views of the Mombocho Volcano, terracotta tile roofs of local homes, gleaming domes of the La Merced church and even a sliver of Lake Nicaragua from its private balcony. The four rooms downstairs are relatively small (though very high ceilings give a sense of space). However, the heart of Los Patios is in its ample and gorgeous outdoor spaces which take up more than half of the square footage of the hotel. The name Los Patios is in homage to these open spaces where guests will find hammocks, a chlorine-free lap pool, a king size chess board, a reading room, a long central patio with couches and tables and even a spacious kitchen area where your made-to-order breakfast is served, complete with French press coffee. 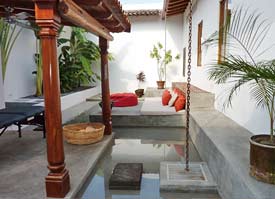 At the back of the property there’s also an outdoor spa pavilion with a shaded massage table set amidst gurgling fountains and dappled sunlight. Treatment prices, like so many things in Granada, are extraordinarily reasonable as well. For example, a 90 minute massage is $40 and a mani/pedi is $20.

Los Patios is definitely one of those hotels from which your vacation photos will likely double as inspiration for your own dream house or future home improvements.