Malpais means “bad country” and this place got the name because all of the rivers that flow into the area dry up in the dry season. However, we (and huge numbers of other travelers) found plenty of good in Malpais and Santa Teresa during our travels in the Nicoya Peninsula in Costa Rica including surf, supermodels, and all kinds of water. 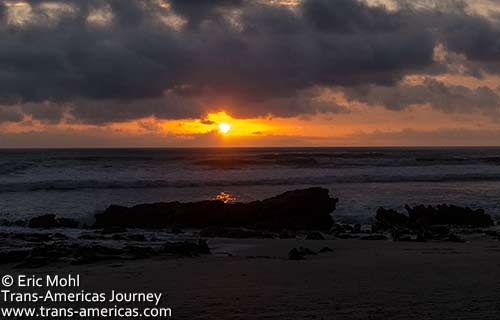 Sunset on the beach in Malpais, Costa Rica.

Surfers descended on the Malpais area first, as they so often do, but now these neighboring towns are well-stocked with tourists of all types–from surfers to families to celebrities to supermodels. Supermodel Gisele Bündchen married quarterback Tom Brady during a second ceremony in Santa Teresa and the couple have returned many times to her spread here, including after Brady’s team, the New England Patriots, lost its Super Bowl bid to the New York Giants in 2012.

The supermodel set stays at flash places like Florblanca Resort, but there are still relatively cheap hostels in town and even a few places to get a relatively affordable local meal once you sift through the sushi restaurants and tapas bars.

A small splurge that’s worth it? A perpetually packed joint called The Bakery right on the main drag. Yes, they do fabulous baked good, from real croissants to awesome cakes.  But they also make a mean quiche and other breakfast/brunch treats plus salads and sandwiches. There’s also Wi-Fi and A/C. 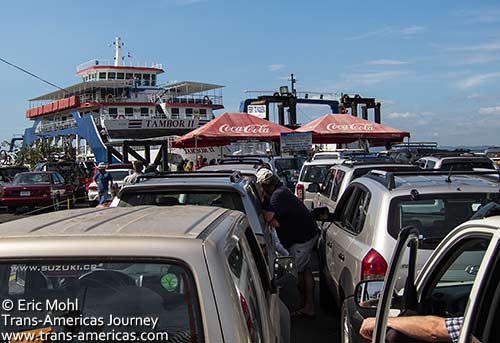 Getting to the Nicoya Peninsula on board the car ferry from Puntarenas cuts out more than 100 miles (160 kilometers) of driving.

Despite the fact that Costa Rica is a small country, it’s full of geographical hurdles (and terrible roads) that make it unexpectedly tricky to travel around sometimes. Santa Teresa and Malpais, for example, are at the southern tip of the Nicoya peninsula and can only be reached in one of two ways. We chose to take the car ferry from the hot and grotty town of Puntarenas to Paquera (US$24 for a car and driver, US$1.70 per person).

The 1.5 hour ride was scenic and relaxing. Compared to driving all the way to Malpais, taking the ferry saved us about three hours of driving and roughly 110 miles (160 kilometers), nearly half of that on unpaved roads. 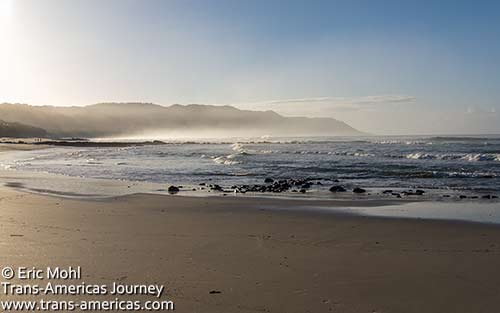 Surfers and strollers love the beaches near Malpais, Costa Rica.

Even though we’re not surfers, the beaches around Malpais and Santa Teresa did not disappoint. We spent hours walking on the flat, white sand.

The nearby town of Montezuma is more of a backpacker magnet with lower price tags, a smaller scale, and an arty vibe that succeeds at feeling beach bohemian much more so than Santa Teresa. After giving Montezuma a drive through one afternoon on our way to visit the Montezuema Waterfall we wished we’d planned to spend a few nights there as well.  Next time. 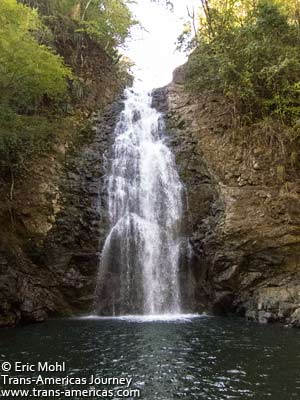 Montezuma Waterfall which fills a series of refreshing natural pools below its base. 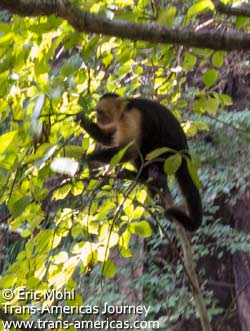 We saw our first white faced capuchin monkey on the trail up to Montezuma Waterfall in Costa Rica.

After so much time in and around salt water it was nice to jump into the natural fresh water pools at the base of Montezuma Waterfall, an 80 foot (24 meter) high cascade. A trail leads up to the waterfall, passing many small, swimmable pools on the way. Be aware: the hike up to the falls itself takes you over slippery rocks, rough hillsides, and through the water. Wear water shoes and watch your step.