Masaya Volcano National Park, established in 1979, is Nicaragua’s first national park. Its centerpiece is an infamous volcano which has intimidated Spanish conquistadors and provided a macabre dumping ground for dictators. Masaya is also a very active volcano–perhaps a little too active–as we found out while traveling in Nicaragua. 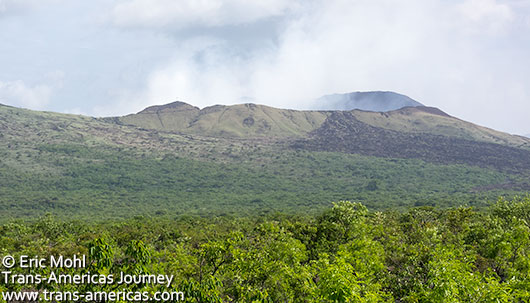 The very active Masaya Volcano, fuming and spewing in the distance, is a mainstay of the southern Nicaraguan landscape.

The most recent full eruption of Masaya Volcano happened in 2008. In April of that year the volcano sent a massive plume of ash more than 1 mile (2 km) into the sky. Less spectacular eruptions continued throughout that year.

The volcano emits gas and steam pretty much all the time as we could easily see whenever we caught glimpses of the 2,083 foot (635 meter) tall volcano from vantage points around Managua including the Pueblos Blancos and from neighboring Mombacho Volcano.

Nicaragua’s Masaya Volcano emits gas pretty much all the time and it became dangerously active (again) in 2012 prompting the closure of Masaya Volcano National Park for two months.

Masaya has seen other kinds of activity too. The volcano was dubbed “The Gate to Hell” by Spanish conquistadors and Nicaraguan dictator Anastasio Somoza Garcia took that nickname literally, using the volcano as a dumping ground for his many enemies.

On a cheerier note, Masaya is also one of the few active volcanoes in the Western Hemisphere where you can drive to the rim and we certainly wanted the chance to look into the “Gate to Hell” for ourselves.

The volcano, however, had other plans. Not long after we arrived in Nicaragua it started rumbling and grumbling back to life prompting the closure of the park for safety reasons after she spewed out some hot rocks which damaged cars parked at the rim and started a brush fire. The park was closed for nearly two months but finally re-opened near the end of our time in Nicaragua. 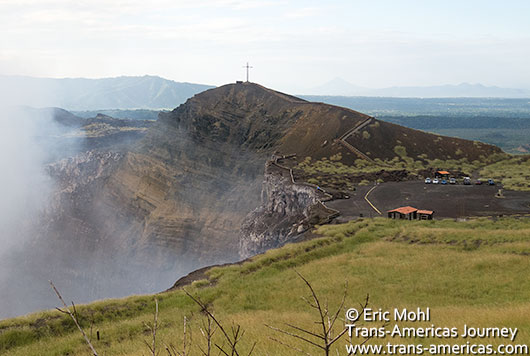 You can drive right to the rim of Masaya Volcano in Nicaragua unless it’s erupting or spewing out hot rocks or too much poisonous gas.

Looking into the “Gate to Hell”

Like all national parks in Nicaragua, entry to Masaya Volcano National Park, located just a few miles south of Managua on the road between the capital and Granada, is US$4 per person. There’s a large and fairly engaging visitor center near the entrance which we visited before driving right up to the rim via a paved road. 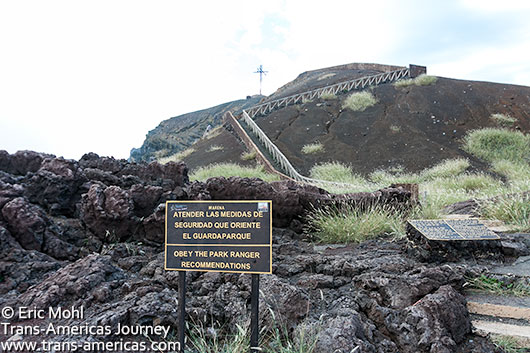 “Obey the park rangers recommendations” is good advice when you’re standing on the rim of a very, very active volcano.

You’re required to park facing out to facilitate a quicker escape should things get dangerous at the top. Just for good measure we parked as far away from the rim as possible. Park employees at the top warn you not linger near the rim if the wind is blowing the volcano’s noxious sulphur dioxide gas your way. 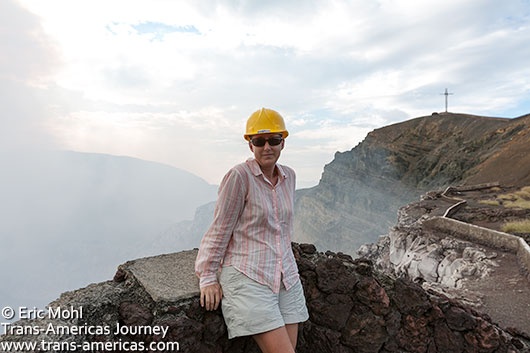 Karen in a hard hat per park regulations. 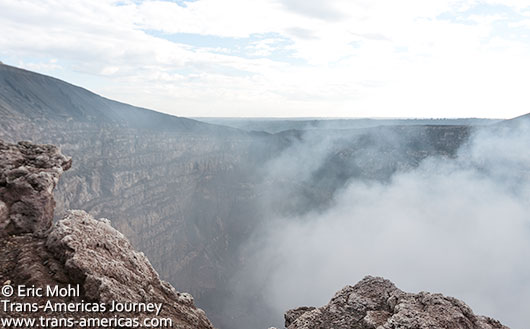 It’s recommended that you don’t spend too much time enjoying the view from the rim of the active Masaya Volcano especially if the wind shifts and bring all that sulphur gas your way.

There are a short trails at the top of Masaya. A couple require a park guide and you can make reservations to take guided night hikes too. One of the most popular trials, which leads up to a large cross on a lookout point with views into the crater, was closed when we visited but we got plenty of walking and gawking in on other trails around the impressive crater. 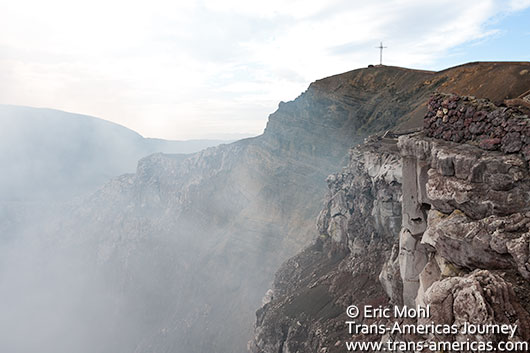 Masaya Volcano is beautiful in a menacing bottomless pit kind of a way.

Clouds swirled overhead, occasionally augmented by a puff from the volcano which seemed absolutely bottomless. Our ears became attuned to every rumble and grumble. We couldn’t shake our visions of hot rocks flying out of the gate to hell and soon returned to the parking lot to drive our truck back down to safety. 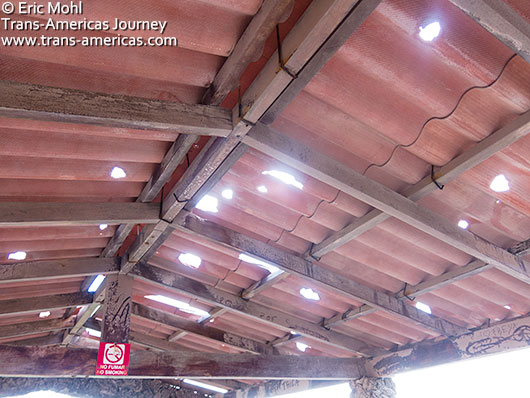 Roof damage to a shelter near the rim of the Masaya Volcano inflicted by hot rocks spewed from the volcano during its most recent burst of activity in 2012.