The heat in lowland Nicaragua can make it feel like you’re living in an armpit and that’s a good thing because steaminess like that will inspire you to head for the hills. There you’ll find the town of Matagalpa with its blessedly cool weather and amazing hot coffee–much of it locally grown on the steep hillsides that surround town. Here’s our Matagalpa travel guide. 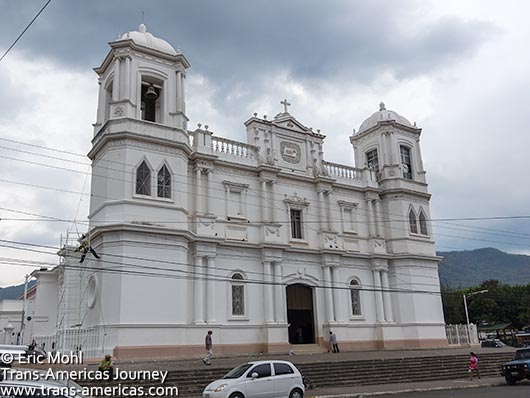 The cathedral in Matagalpa, Nicaragua.

The rebel heart of Matagalpa

Matagalpa’s first residents, the Matagalpa Indians, were known for their fierce resistance to invaders. When the Spanish arrived in the 1500s the Matagalpa Indians managed to fend off with admirable success with just bows and arrows, though the conquistadors lust for the gold in the hills around Matagalpa would not be denied.

In the mid 1800s the Army of the North was founded in Matagalpa to repel William Walker, one of the most notorious of the new wave of immigrant invaders, who was defeated with the help of 60 Matagalpa Indians in the Battle of San Jacinto. 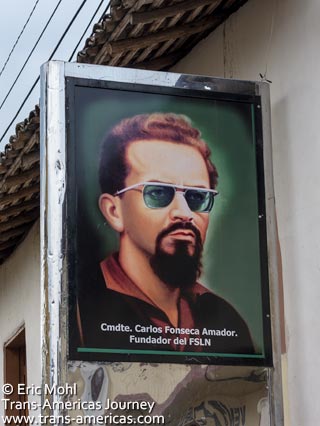 A portrait of FSLN founder and Matagalpa native Carlos Fonseca outside the small museum dedicated to his memory.

Matagalpa is also the birthplace of Carlos Fonseca Amador who founded the Sandinista National Liberation Front, aka FSLN. In 1961 the FSLN started as a guerilla group and eventually overthrew the US-backed Samoza regime in 1979. The FSLN is now a major political party in Nicaragua. Fonseca is the current reigning king of rebellion in the city and there’s a small, dusty museum/shrine to him in town. 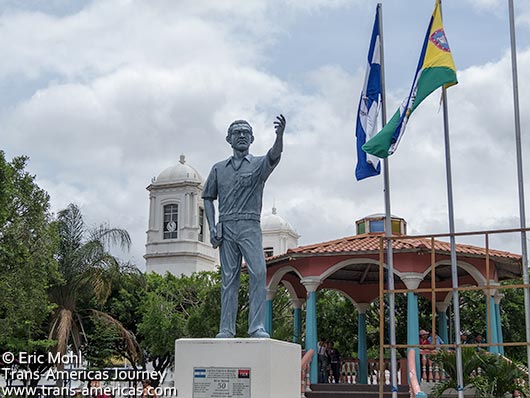 In 1987, as the tug of war for power in Nicaragua raged on, an engineer from California named Ben Linder got involved. He was in Matagalpa working on a hydroelectric project when he was assassinated by the CIA-backed Contras (if you don’t remember Ollie North then go Google him) for his perceived association with the FSLN. He was 27-years-old. FSLN hero and now President of Nicaragua, Daniel Ortega, gave a eulogy at Linder’s funeral. 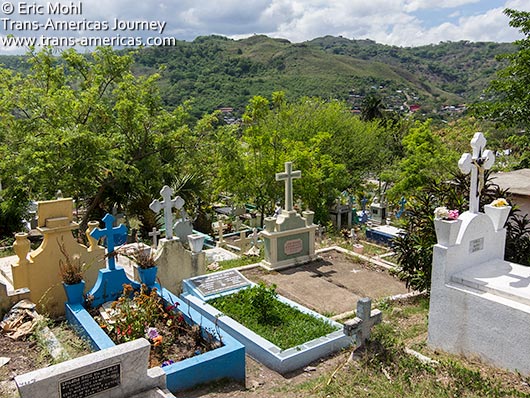 The grave of American aid worker Ben Linder in Matagalpa, Nicaragua where he was buried after being shot at point-blank range by CIA-backed Contras who suspected the 27-year-old had ties to the FSLN rebels in Nicaragua.

You can visit Ben Linder’s grave in the Matagalpa cemetery where his plot (ask cemetery caretakers to lead you to it) is lovingly tended and high on a hillside above town. 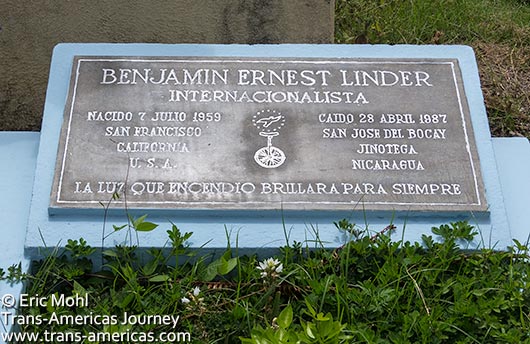 The grave of American aid worker Ben Linder in Matagalpa, Nicaragua where he was buried after being shot at point-blank range by CIA-backed Contras who suspected the 27-year-old had ties to the FSLN rebels in Nicaragua.

Honestly, there’s not much else to do in town besides enjoy the cool weather and, perhaps, watch a man walk his spotted pig down the street. It’s that kind of town. However, you may get the chance to see how much Nicaraguans love baseball like we did when the Cuban national team faced off against the Nicaraguan national team in the local baseball diamond. 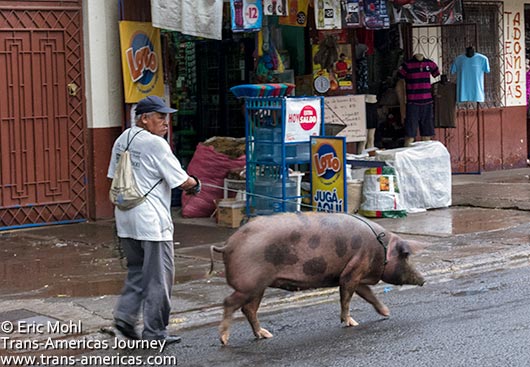 The winner of our caption contest for this picture is Matthew Karsten (aka the Expert Vagabond) who submitted: “Who says bacon isn’t healthy?”

Where to eat in Matagalpa

Restaurante El Mexicano (across the street from Hostal Buena Onda) was opened by a chef from Mexico and his Nicaraguan wife. Together they serve up good, solid, filling Mexican food that’s the most authentic we’ve seen since Mexico (plates are around US$3).

La Vita Bella Italian restaurant is down a scenic alley with no sign. There’s a lovely back garden, real mozzarella cheese, and some pastas are homemade. The beer is cold and the prices are reasonable (about US$7 for an eight slice perfectly passable pizza, for example).

El Pullazo is a big restaurant on the highway just before you reach Matagalpa (as you’re coming up from Managua) and we had some of the best beef we’ve eaten in years here. Nicaragua is known for its beef and this place is known for doing it right. It’s not the cheapest meal in the country (about US$9) but portions were huge and the meat was extremely tasty.

Guiliras on the grill in Matagalpa. The banana leaf squares keep them from burning.

A clutch of two or three street vendors set up in front of the supermarket near the main square at night and make fresh sweet corn cakes on a griddle. They’re called guiliras and they usually come with a slice of salty cuajada cheese. This is a regional specialty and it’s delicious so get your fill here.

For some sweet treats visit El Castillo del Cacao (a short taxi ride east of town up a vaguely-signed driveway). Started by Swiss chocoholics who began making chocolate out of sheer frustration at the lack of good stuff in Nicaragua, El Castillo (which means the castle in Spanish) really is housed in a pseudo-castle like structure.

You can take a 45 minute guided tour (US$6 per person) which explains the whole chocolate making process from plant to product or you can wander around for free. There’s a small shop as well where you can stock up on reasonably priced chocolate including gourmet bars with almonds, cashews, candied orange or cacao nibs mixed right in. 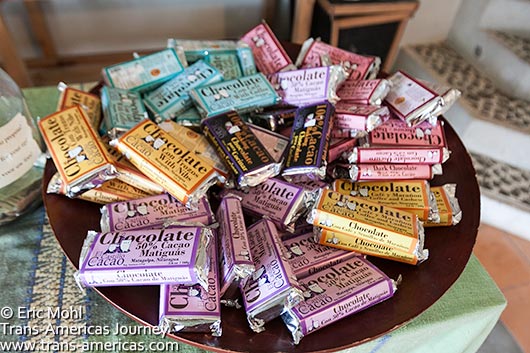 Unlike some coffee growing regions there’s also a coffee drinking culture in Matagalpa and the town’s coffee shops–from quick pit stop places to sweet cafes–are popular with locals and visitors alike. Our favorite was SN Café with its chic design, welcoming vibe, and labeling that tells customers exactly where their coffee comes from.

If you’re thirsty for something other than coffee, check out El Artesano bar with its rustic decor, hustling waiters, and lively crowd. You can get a cold beer or a rum and coke for about US$1.

Where to sleep in Matagalpa

Carnival rides waiting to be set up on the streets of downtown Matagalpa.

We stayed at Hotel Fuente Azul which is on the highway side of the third bridge into Matagalpa as you’re coming in from Managua. It has outdoor parking, Wi-Fi, and US$20 gets you a private double room with a fan and bathroom.  It’ll do, but there’s now a much better option.

How do we know? Because the guy behind Buena Vista Guesthouse, which wasn’t open when we were in Matagalpa, is Jason Greene. He’s a guy from the US whom we met in Leon when we stayed at his Harvest House Guesthouse there. In Matagalpa Jason offers the same safe, clean, comfortable, family home feel with private rooms (starting at US$25 per night) and dorm rooms (US$10 per night) with a massive shared kitchen and fun common spaces just few blocks from the town’s central plaza. Generous discounts are given for weekly or monthly stays. We highly recommend you check it out and a reservation would be a good idea too.

One warning: Coming over a rise on the Pan-American Highway from Managua, not far from the Matagalpa turn-off, you will see people along the side of the road with parrots tied to sticks, iguanas held up by their tails, squirrels with ropes around their necks, even baby white-face capuchin monkeys. They were all poached from the forest and they’re all for sale. It’s horrifying and it was the only example of this sort of poaching we saw in all of Nicaragua. 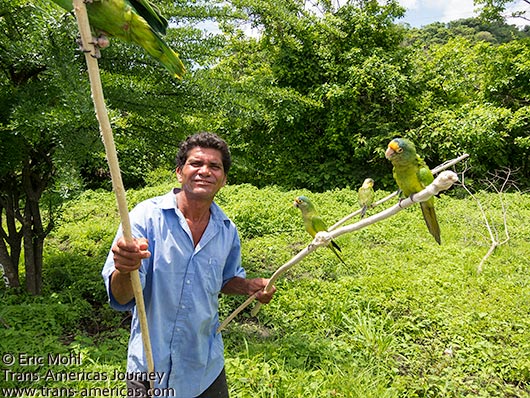 Poached parrots being sold on the side of the Pan-American Highway near Matagalpa, Nicaragua.