We headed to Mazatlan because of the city’s illustrious past as Mexico’s first truly glamorous beach resort and to see what’s become the city that once attracted the stars. 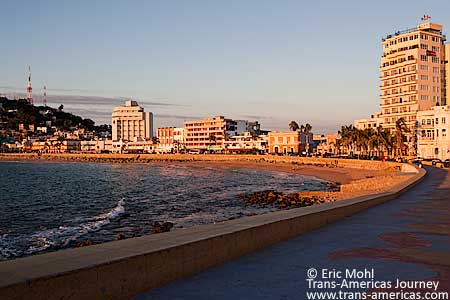 Playa Olas Atlas, just a few blocks from the center of Old Mazatlan, was one of the first resort areas in Mexico.

Located down at the Playa Olas Atlas end of town, the original part of Mazatlan, called Old Town, was once referred to as the “Pearl of the Pacific.” John Wayne used to keep a boat here and Ernest Hemingway spent more than a little bit of time in town. The area has long since let go of the last vestiges of its glamorous past and embraced, out of choice or necessity, the present. 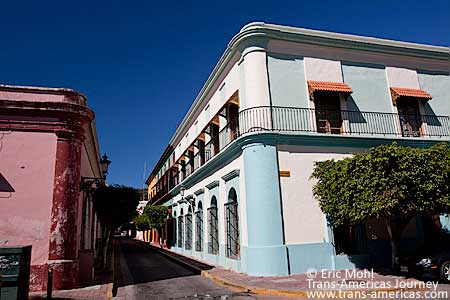 Mazatlan’s Old Town is filled with colonial buildings. Some are crumbling while others have been beautifully restored.

Today, Old Town combines the pastels of Miami with the wrought iron and languid patios of New Orleans and many of the original buildings have been (or are being) renovated, giving the area a kind of lazy boom-town feel. 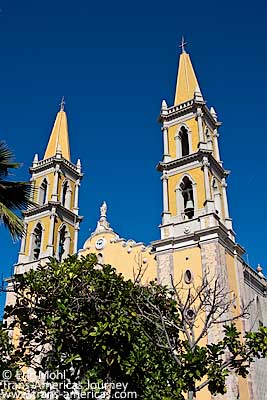 Mazatlan’s Zona Dorado (Golden Zone), is the more modern drag. It’s a kind of low rent Cancun or Fort Lauderdale with high rise resorts (one with 1,000+ rooms), lots of restaurants offering buffets or hamburgers, and a half hearted attempt at style.

Mazatlan is an old travel battlehorse that’s so comfortable in its peeling, slightly-crumbling skin that visitors are instantly made to feel at ease. A fresh crop of hip bars, a thriving arts scene, and a growing number of boutique hotels keep the city from lurching into has-been-land. 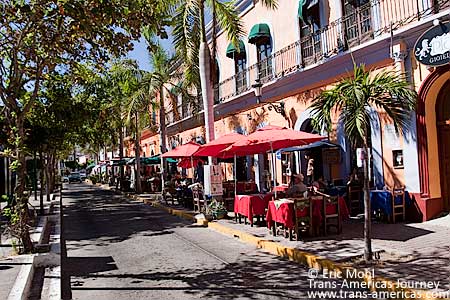 The heart of Old Town Mazatlan is the Plaza Machado, surrounded by cafes and the beautifully restored Angela Peralta Theater.

A seafood meal is the perfect compliment to the sights and sounds of a low-key seaside town like Mazatlan. We spent plenty of afternoons at Mariscos Tono enjoying wonderfully fresh ceviche and 12 peso (about US$0.65) cervezas.

We were also tipped off about a great taco place called Taqueria Playa Sur which produces tender, tender beef and a has a bustling turnover. Want a tablecloth, live jazz, a wine list, and a cappuccino? Restaurants like Pedro y Lola in Old Mazatlan deliver that too. 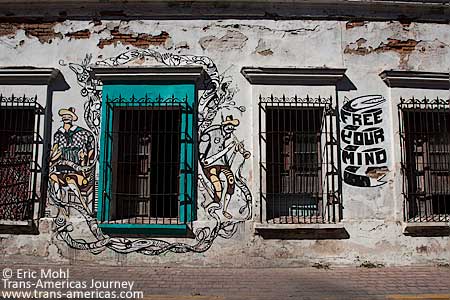 Street art on one of the crumbling buildings in the Old Town.

Old Mazatlan is home to some exceptional hotel bargains, like Hotel Belmar, which opened in 1918 and was the first resort hotel to be built in Mazatlan. Today, it’s a faded but still perfectly acceptable budget option that’s clean, safe, central, and has functioning Wi-Fi and secure parking. We got a room with A/C for 200 pesos (about US$13). 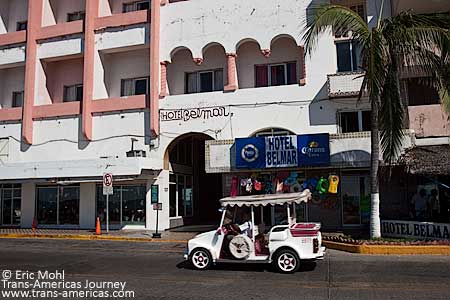 The historic Belmar Hotel with an old school open-air, Pulmonia taxi in front.

We were intrigued by the number of really chic little boutique hotels and bed and breakfasts that we walked past on our daily strolls through Old Mazatlan. One of them, the Casa Lucila, is right on the waterfront and has a story as irresistible as its location.

Opened by Conchita Valades de Boccard and her husband Christopher, this stunner is named after her mother and the eight over-sized rooms (many with sea-view patios) are named after Conchita’s eight sisters. The restaurant and lounge is named for Conchita’s father, Mazatlan crooner Fernando Valades Lejarza. Conchita jokes that she’s going to have to open another hotel so her five brothers can have rooms named after them and she’s done such a wonderful job with Casa Lucila that we really hope she follows through on that threat.

A native of Mazatlan, Conchita bought the property in 2007 and photos of the building at that time prove that calling it a shambles would have been a compliment. Today the tranquil and stylish two story hotel is properly dressed in Italian stone and windows and doors and plush linens. There’s even a plunge pool and a lovely one-room spa. The sublime custom mattresses are made by hand in Mazatlan by a man who can only be called an artist. 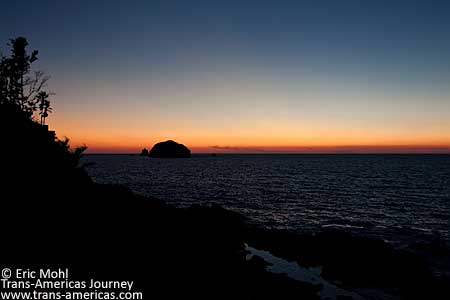 Sunset on the Pacific from the Casa Lucila Hotel in Mazatlan.

As if to seal the deal, the location of the hotel, on a slight rise above the seawall, provides gratis views down the long, sweeping crescent of Olas Atlas Beach.

Other Mazatlan hotel options include The Melville and Hotel Machado.