How do you build a public transportation system that can service the city of La Paz, Bolivia, the city of El Alto thousands of feet above it, and the millions of people who live in a setting that’s more like a gigantic rugged ski area than a metropolis? You build an extensive and fun gondola-style cable car system called Mi Teleferico (My Cable Car in Spanish). During many visits to La Paz we spent hours traveling on this impressive system. This post presents our favorite shots taken from Mi Teleferico cable cars over the city, amazing stats about the system, dramatic video, recommended routes for travelers, and a handy map of the entire cable car network.

The Mi Teleferico by the numbers

2014: year the system debuted its first lines–when we traveled in and out of the city between 2017 and 2019 we saw the Doppelmayr-built system expand from three lines to 10 lines with impressive speed

More than 700 million US dollars: reported cost of the Mi Teleferico system so far

10: number of color-coded cable car lines in service as we write this including 5 lines (green/verde, sky blue/celeste, white/blanca, orange/naranja, and brown/café) that cover the city of La Paz,  3 lines (yellow/amarilla, red/roja, and purple/morada) that connect La Paz to the city of El Alto on the Altiplano 2,300 feet (701 meters) above the city (thus avoiding the notorious traffic and the pricey, slow, and dangerous belching buses), 2 lines (blue/azul, silver/plateada) that service El Alto–an 11th  line (gold/dorada) is currently under construction over the Zona Sur southern part of La Paz.

20.3: number of miles (32.7 km) currently covered by the Mi Teleferico cable car system, making it the longest aerial cable car system in the world at the time of writing

2,717 feet: amount of elevation (828 meters) the cable car lines ascend and descend between El Alto and the southern portion of La Paz

Tens of thousands: number of passengers who use the system every day

36: number of cable car stations at the time of writing 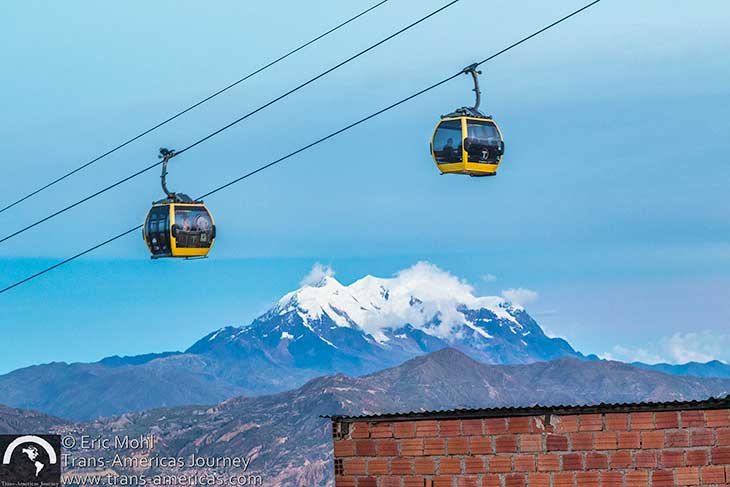 At 21,122 feet (6,438 meters), Illimani is the second-highest mountain in Bolivia. On clear days, views of its snowy peak rising above the city of La Paz are spectacular. 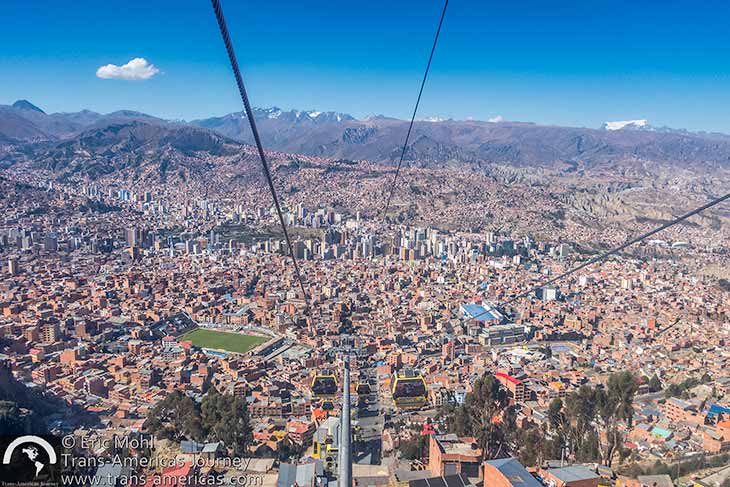 Cable cars on the Yellow Line above the sprawling city of La Paz. 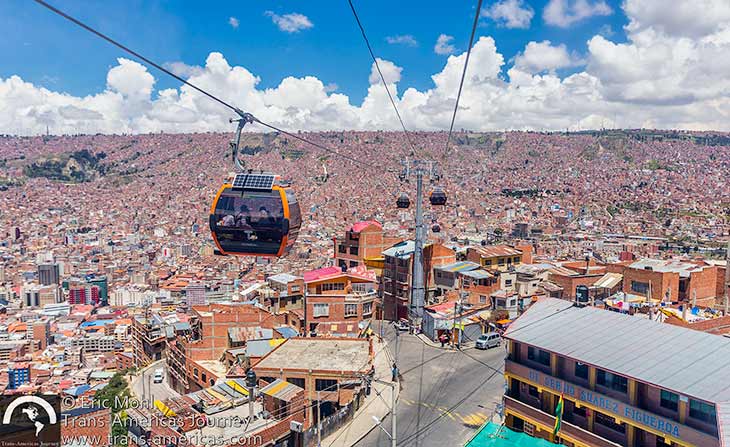 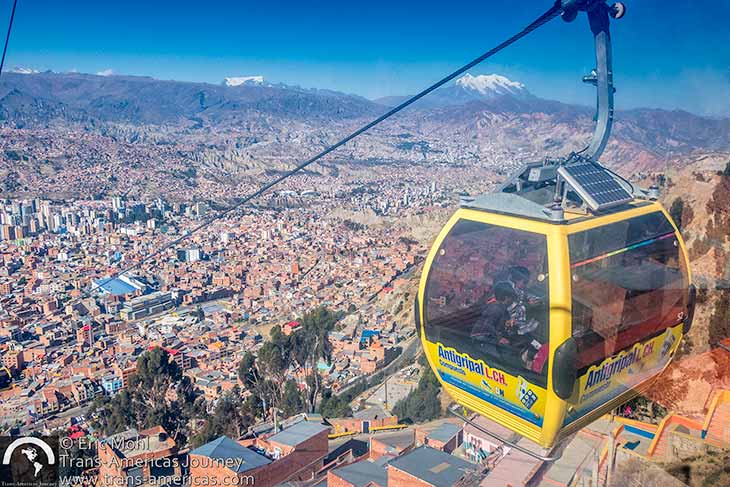 A steep section of the Yellow Line over La Paz. 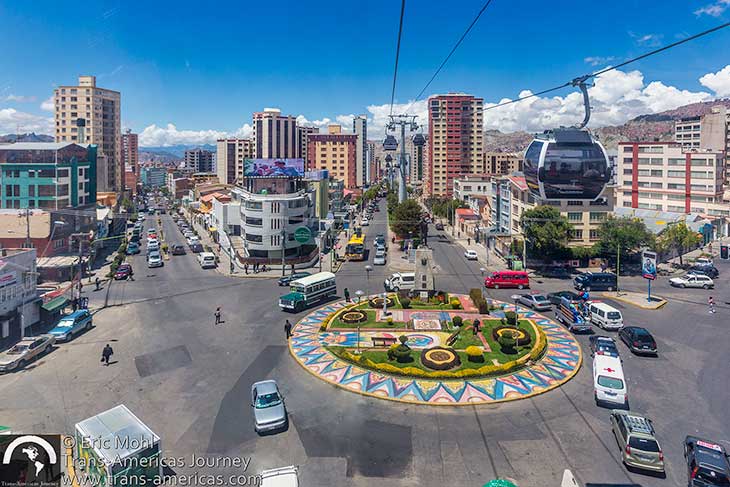 A cable car on the White Line passing over the Monumento Busch in La Paz. 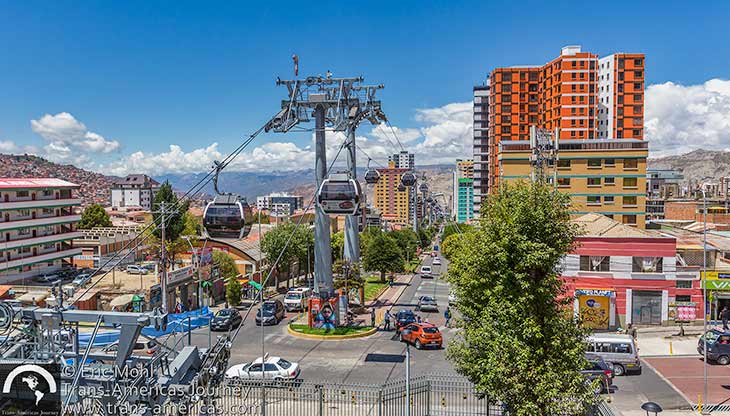 Mi Teleferico cable cars on the White Line pass through the Miraflores section of La Paz. 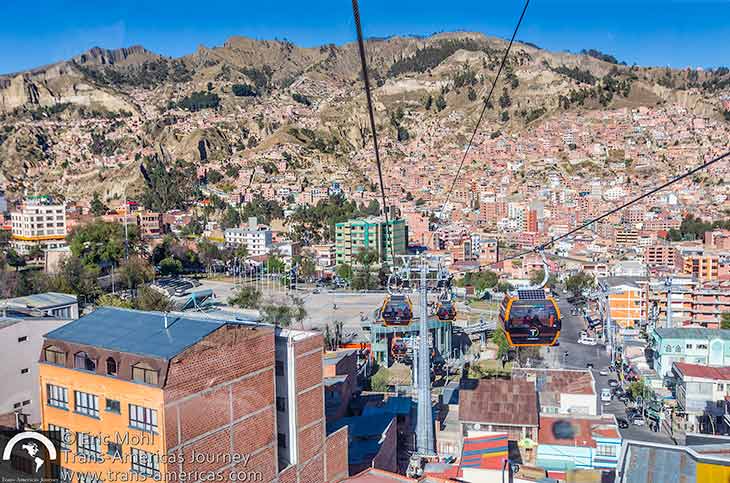 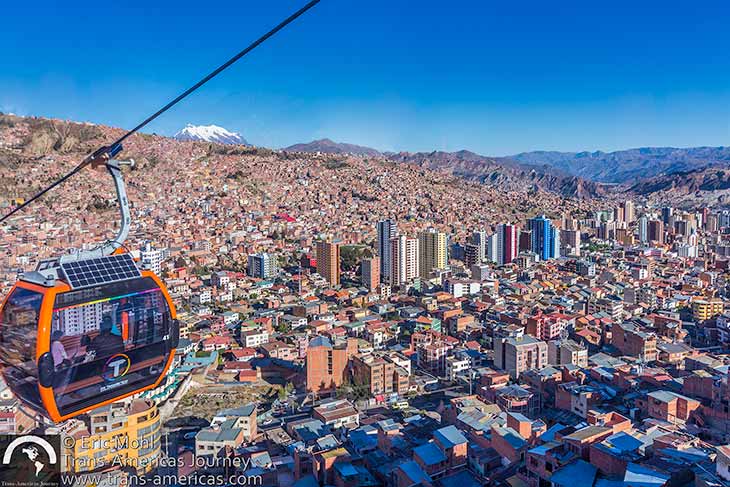 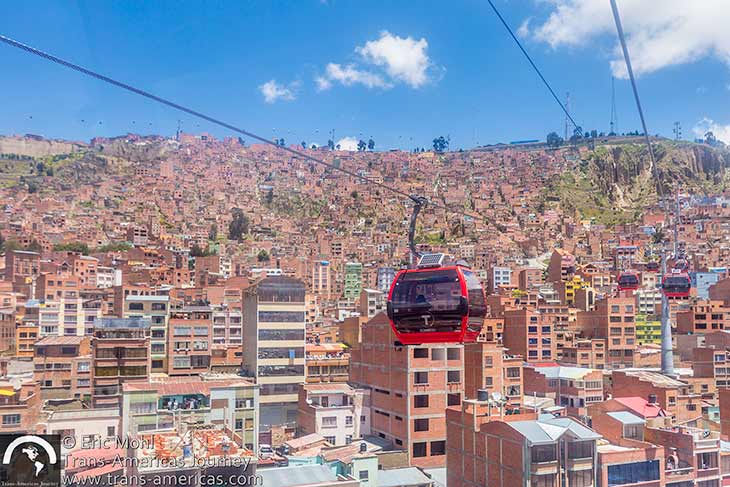 Mi Teleferico cable cars on the Red Line, one of the first lines in the system. 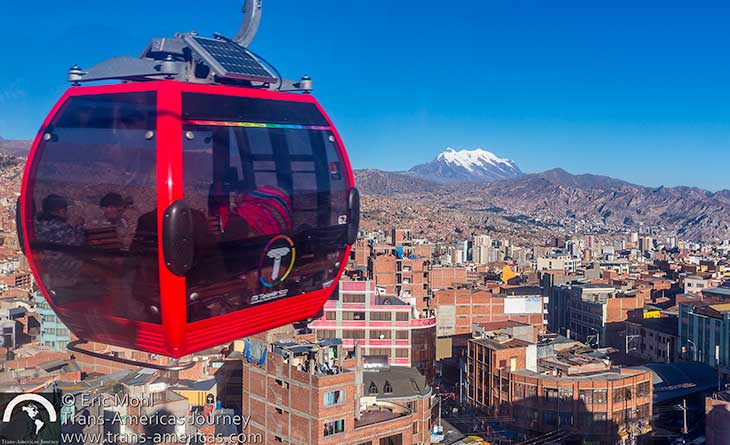 The first three Mi Teleferico lines that debuted were the Red, Green, and Yellow Lines which are also the colors of the Bolivian flag. 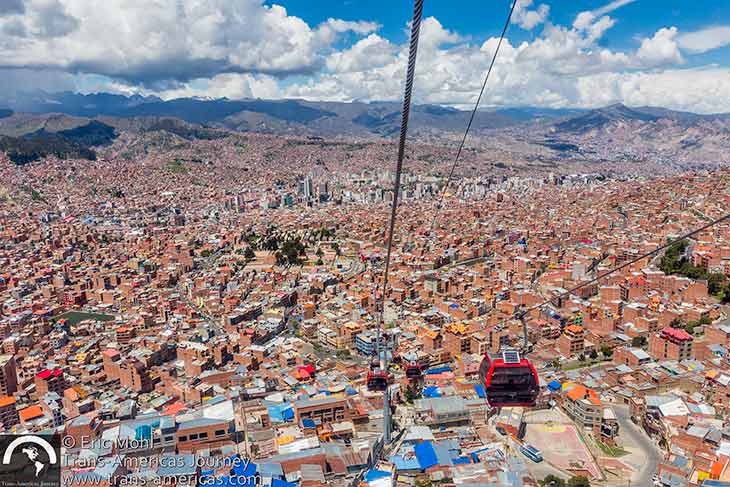 Another dramatic incline in the Mi Teleferico cable car public transportation system in the city of La Paz, Bolivia. 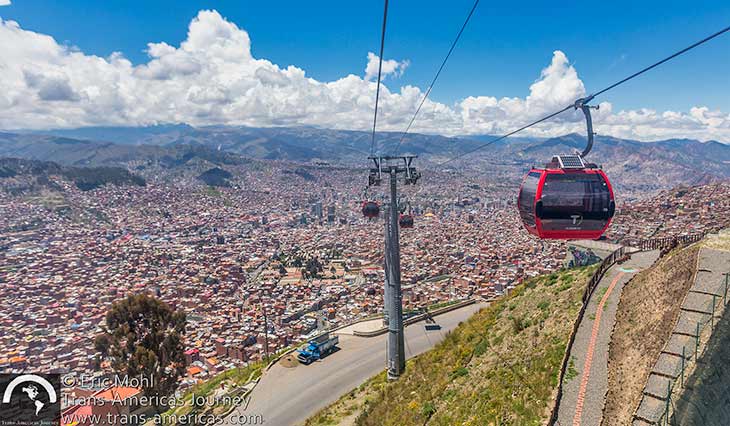 Red Line cable cars passing over a road that switchbacks its way from the Altiplano down to the city of La Paz in the canyon below. 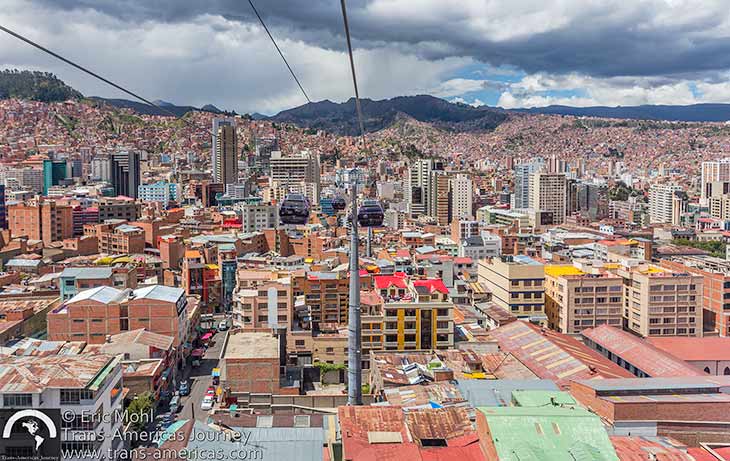 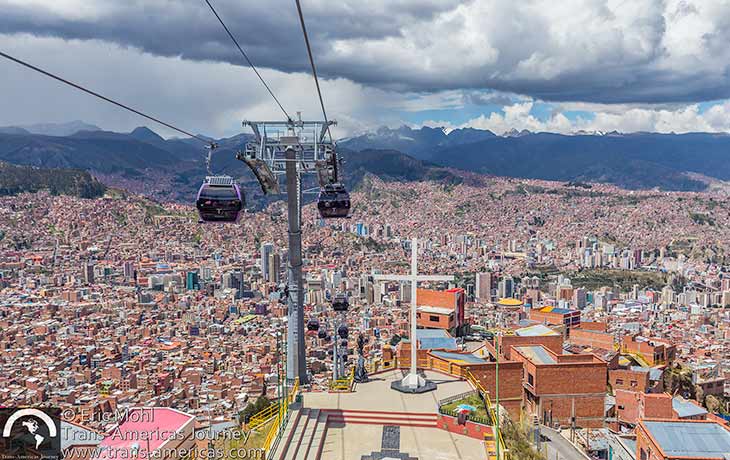 Cable cars on the Purple Line. 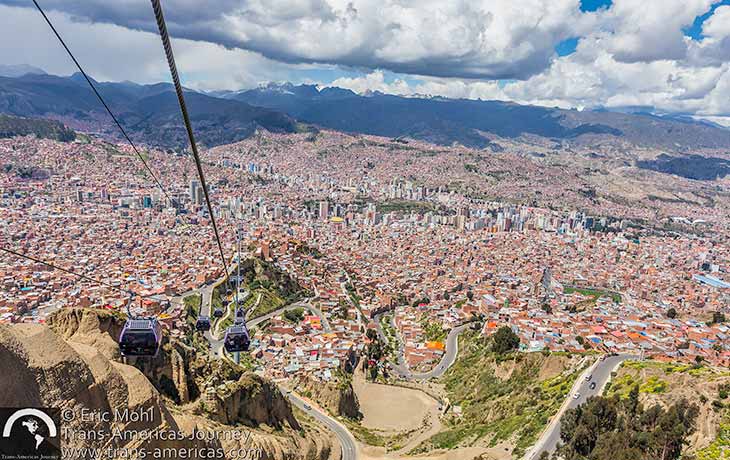 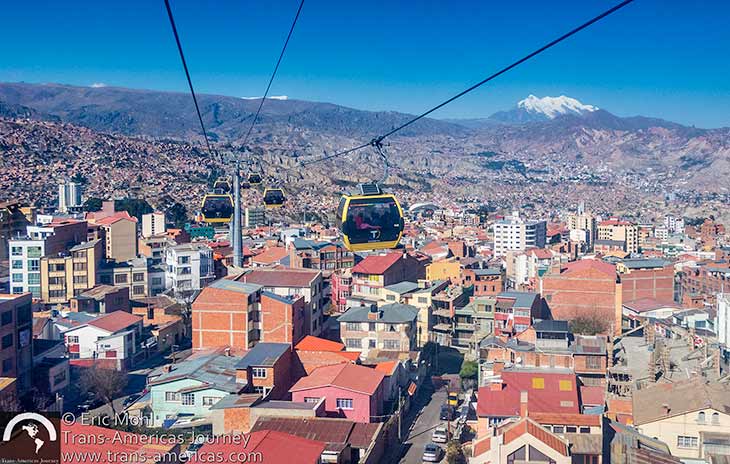 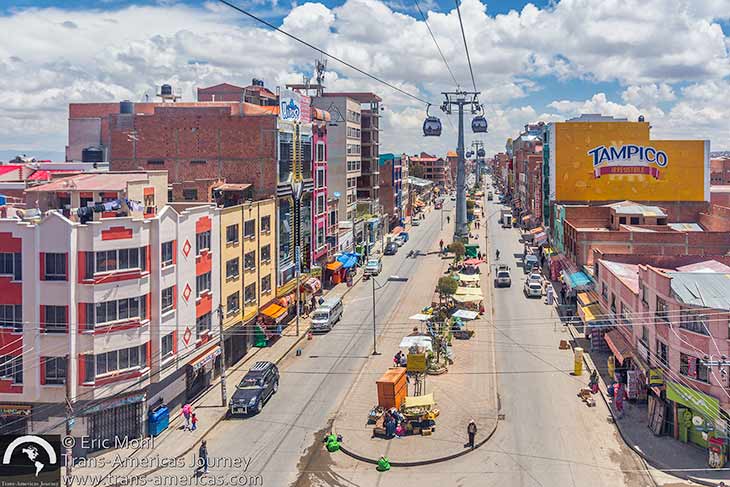 Mi Teleferico cable cars on the Blue Line which pass over the city of El Alto on the Altiplano above La Paz. 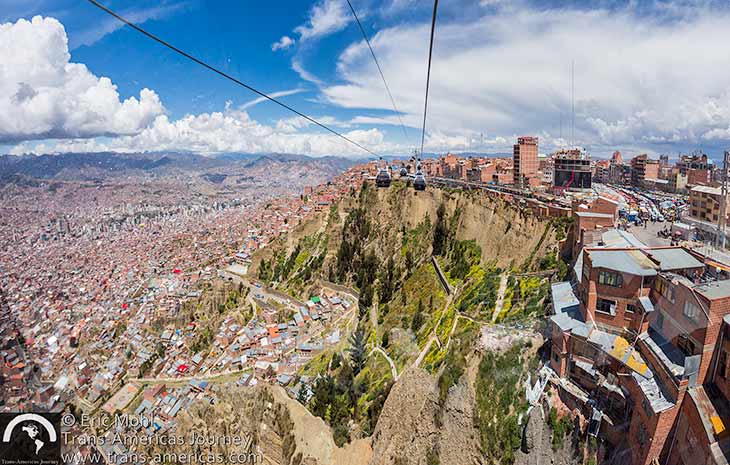 One of the most dramatic sections of the entire Mi Teleferico system is this stretch of the Silver Line that passes above the edge of the Altiplano with the city of El Alto on the right and the city of La Paz in the canyon far below. 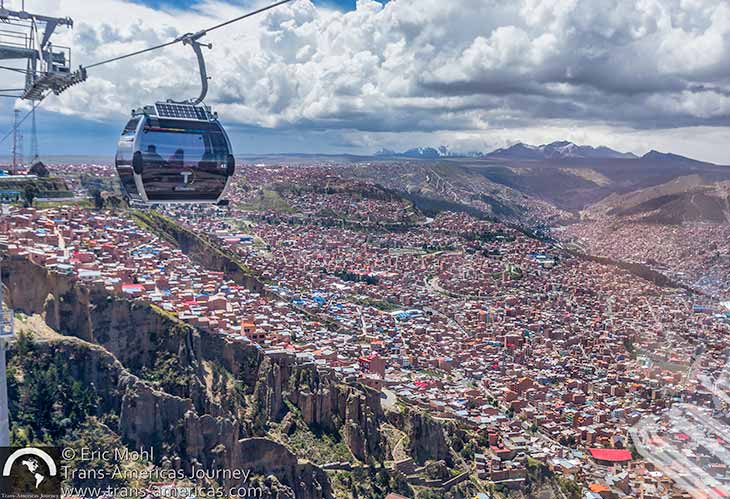 Riding the Mi Teleferico cable cars is even more dramatic in video. That’s why Eric rode every inch of every line in the system to shoot this time-lapse video as cable cars swing in and out of stations, glide over rooftops, and travel up and down the breathtakingly steep inclines in the system. Don’t miss the sparkling nighttime footage at the end.

The Mi Teleferico system isn’t just great for locals. Visitors to La Paz can and should use the clean, modern, affordable system to traverse the city and enjoy the views as well. Here are two recommended routes for travelers visiting the city of La Paz.

You can travel from one end of La Paz to the other in an hour. First, take the Verde (Green) Line from its terminus at the Irpawi Station in the southern Zona Sur end of the city then transfer to the Celeste (Sky Blue) Line, the Blanca (White) Line, and the Naranja (Orange) Line to reach the Estacion Central (Central Station) in the city center–near where many of the best things to do in La Paz (including museums, shopping, attractions, architecture, bars, and restaurants) are located. Then continue one stop on the Roja (Red) Line to Estacion Cemeterio (Cemetery Station) in the north of the city where you’ll find some striking mausoleum murals.

For the most dramatic views, take the Roja (Red), Morada (Purple), or Amarailla (Yellow) Lines that travel from the city of La Paz in the canyon up to the city of El Alto on the Altiplano above. Once up in El Alto, all three of those lines easily connect with the Plateada (Silver) Line which includes one of the most dramatic sections of the entire Mi Teleferico system as it travels above the ridge of the Altiplano where the terrain drops precipitously down to the city of La Paz in the canyon below. Have your camera ready.

Unlike the 2-dimensional map of the Mi Teleferco cable car system below, the city of La Paz is very much 3-dimensional and it can be hard to get your bearings. To make it easier, we’ve circled the main areas of the city that are of interest to visitors. Notice the city of El Alto on the left side of the map. The center of La Paz, including the areas of Sopocachi and Miraflores, and the Zona Sur in the south of the city on the right side of the map. 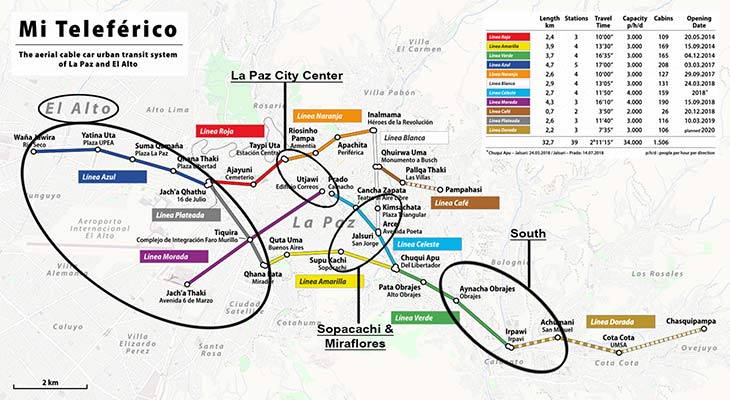