When you think of an Incan archaeological site you probably think of stone walls and the remains of temples and other structures. You won’t see any of that at the Moray archaeological site in the Sacred Valley of Peru. This odd and petite site is one of our favorites because of its unusual back story and its lovely location. Oh, and there’s a world-class restaurant at Moray as well.

An overview of the Moray archaeological site in the Sacred Valley in Peru.

The Inca loved this valley which was cut by the Urubamba River and offered fertile soil that allowed the rising empire to feed its people. This reverence led to the name Sacred Valley of the Incas (Valle Sagrada de los Incas in Spanish). Other cultures thrived in the valley before the Inca including the Chanapata, the Qotacalla, and the Killke. However, the Inca created the archaeological sites that still remain and tens of thousands of travelers visit the Sacred Valley to see them every year. Machu Picchu is, by far, the most famous Incan archaeological site in the region, but there are many others that are worth your time, including the Moray archaeological site. 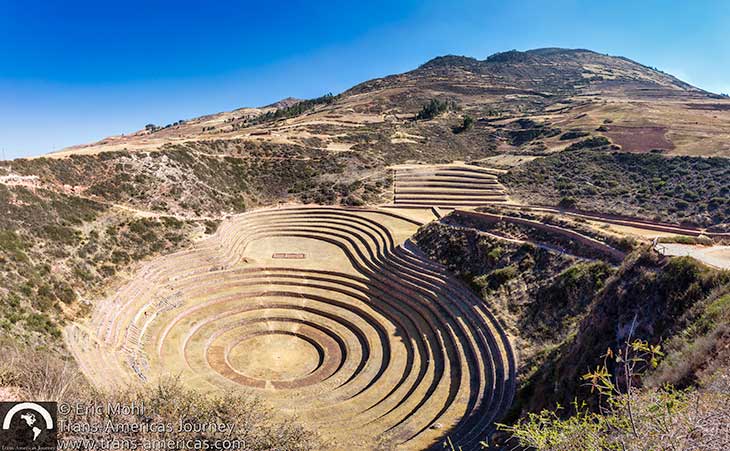 The elegant terraced circles at the Moray archaeological site were crafted by the Inca and were likely used to improve their farming techniques.

If the prevailing theories about the Moray archaeological site are true, the Inca may have been even more clever than we think. It goes like this: the Inca may have built the sunken circular terraces as a microclimate agricultural lab that allowed them to perfect their farming techniques and succeed in feeding their growing empire. 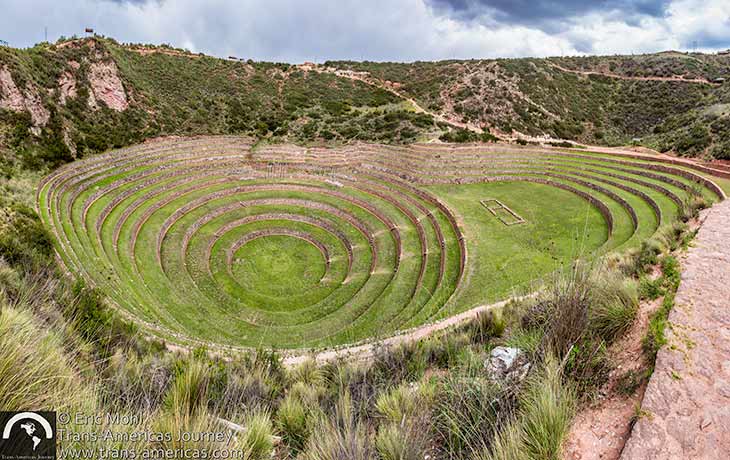 Experts believe these descending terraced circles create microclimates that the Inca used to learn how to grow more food as their empire expanded.

At Moray, you will see large semi-symmetrical circles of terraced land that descend into the earth. The largest one is 98 feet (30 meters) deep and 722 feet (220 meters) across. That’s pretty impressive work, but there’s more.

Each terraced circle contains microclimates at various levels. For example, one of the circles is as much as 27 degrees F (15 degrees C) cooler at the bottom than it is at the top. Studies have indicated that even the soil changes within each circle with the addition of soil from other regions.

The microclimates and the different soil types seem to have been created by design and experts speculate that the Inca did all of that in order to build an agricultural lab that would allow them to identify the optimal growing conditions for their core crops. 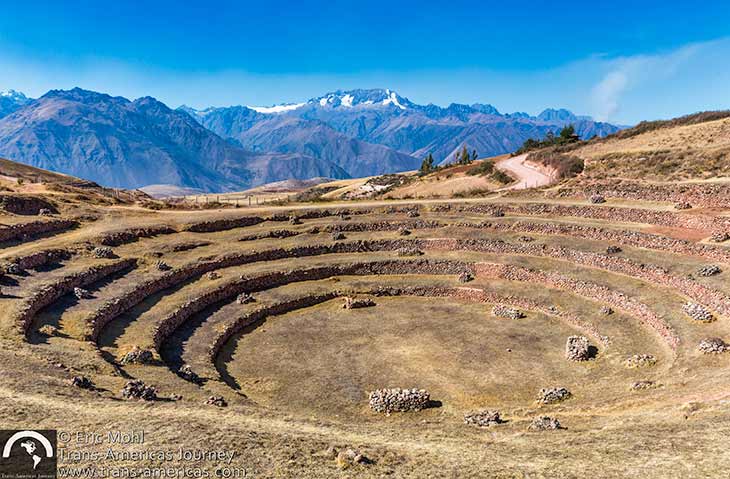 Erosion is a problem at Moray and this circle was being repaired and rebuilt when we were at the site.

They even included ingenious stairs in each circle by building flat, protruding stones into the retaining walls around each terrace which allowed people to walk up and down from one terrace to the next. Unfortunately, you’ll just have to imagine using those stairs. When we were there, visitors could enter the upper levels of the main circle, but to protect the site, visitors were not allowed into other circles and were restricted to a prescribed trail through the site. 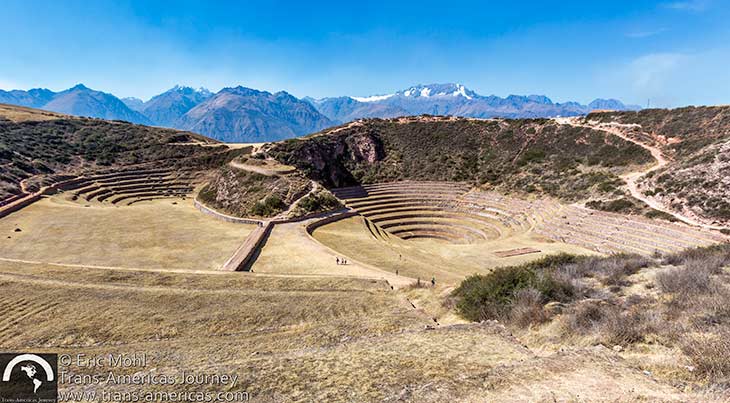 While most Incan archaeological sites feature huge stone walls and the remains of structures such as temples, the Moray site is all about these circles in the earth.

The Moray archaeological site is 3 miles (5 km) from the town of Maras and its famous salt pools. It’s also not far from Chinchero. If you’re pressed for time, it may make sense to visit Moray, Maras, and Chinchero in one very long day.

The final approach to Moray, which is located on a plateau high above the valley, is via a narrow dirt road with many blind corners and some sections that are only wide enough for a single lane of traffic. This can create some hairy standoffs as tour buses, taxis, and private cars navigate the road.

Wear good walking shoes and wear a hat and sunscreen and carry water because there is very little shade.

Where to eat near Moray

Given the likely agricultural purpose of Moray, it’s fitting that Peruvian star chefs Virgilio Martinez and Pia Leon (of Central and Kjolle respectively) chose to open a restaurant just a few steps away from the site. The duo has spent years investigating Peruvian ingredients, techniques, and traditions and reinterpreting them in the kitchen of acclaimed restaurant Central in Lima. 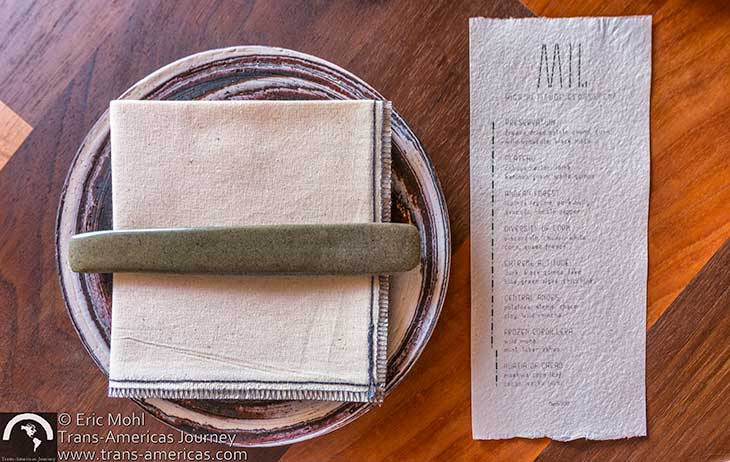 In 2017, they opened a second restaurant called Mil overlooking the Moray site. Mil is also home to the team’s Mater investigation center which explores the products, foods, and food traditions of Peru. The polished restaurant (lunch only, reservations essential) focuses on Andean ingredients. 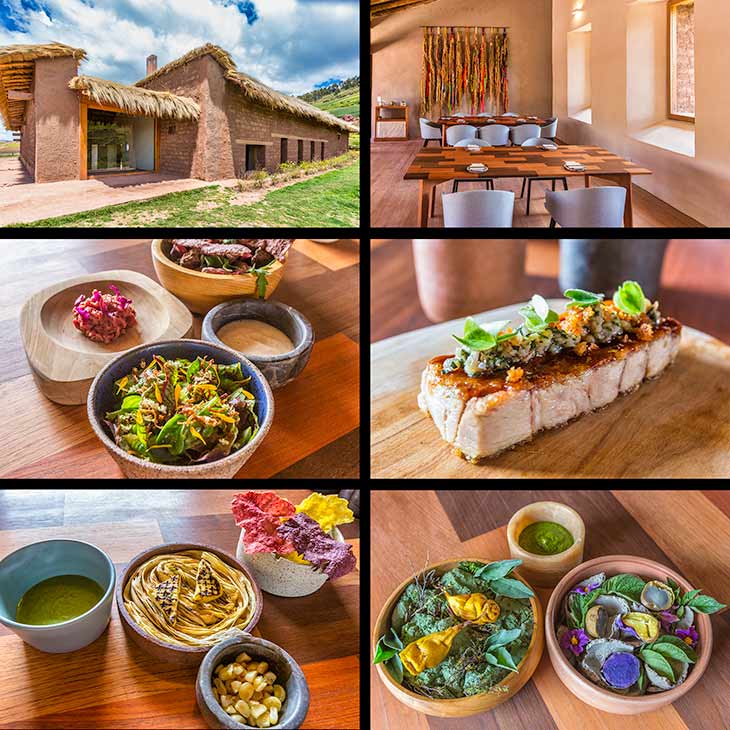 Adventurous, well-executed dishes based on Andean ingredients and techniques are a hallmark of Mil restaurant.

During our 8-course, 3-hour meal (633 soles or about US$177 per person without beverages, a vegetarian version of the menu is also available), we had the best quinoa we’ve ever had (forget what you think you know), a lamb tartare that beats beef any day, a salad (salad!) worth flying to Peru for, and much more. Service was informed and smooth right down to the lush alpaca blankets on offer should you catch a chill at this altitude (more than 11,000 feet).