Despite what we’d heard, the two day trek to the El Mirador archaeological site in Guatemala wasn’t as hard or as hot as we’d feared and our “rest day” at the site itself was pure pleasure (except for the part about getting peed on by spider monkeys). However, things were about to change as we took the long way home. 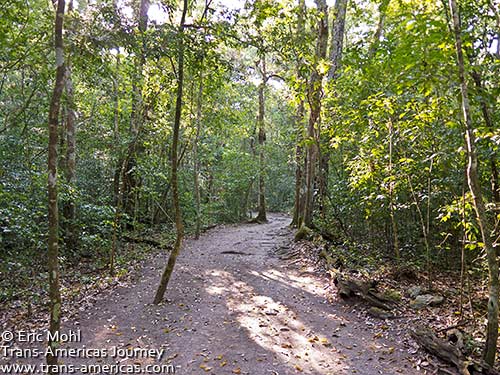 This sacbe (a raised paved road built by the Mayans) connects the El Mirador site to the Nakbe site. This ancient highway was used by the Mayans then and is used by visitors like us now.

Because we hate to back track

We’ve always hated back tracking so we opted to add a day on to or El Mirador jungle trek (making it a six day adventure, not the usual five days) which let us return to Carmelita by making a loop rather than retracing our steps back over the same ground we covered during the walk in.

After our rest day spent exploring the El Mirador site we packed up camp and headed to another archaeological site called Nakbe. The trail from El Mirador to Nakbe was the most untouched feeling stretch of jungle on the trek so far and we often felt like jaguars must be nearby though we never actually saw one. 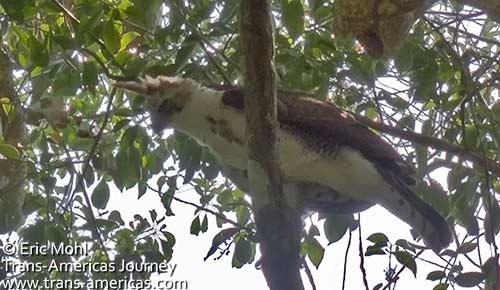 We thought this was a juvenile harpy eagle but it turned out to be a juvenile ornate hawk eagle, which is also cool.

We did see a spectacular bird. At first we thought it was a juvenile harpy eagle (a massive and rare bird of prey that we’ve been dying to see in the wild) but it turned out to be a juvenile ornate hawk eagle, which was still a thrilling sighting for us.

Karen and our guide, Alex, arrive at “Nakbe City Center.” Who knew archaeologists have a sense of humor?

A mere three hours after leaving El Mirador we reached the Nakbe archaeological site where we set up camp in a cleared area that was once a massive Mayan plaza.

Discovered in 1930, Nakbe is believed to have been a large city (though mere glimpses of it are currently excavated) and important in the region because of its deposits of limestone which were needed to make the pure white plaster the Mayans were so fond of putting on everything from temple facades to bedroom floors. 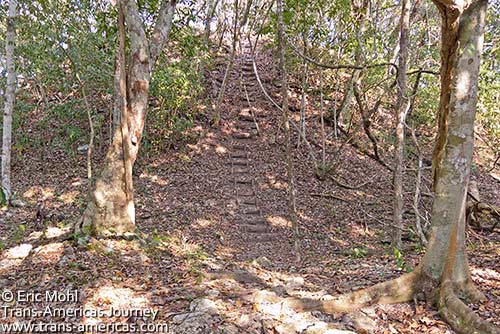 Modern stairs up the side of an ancient pyramid at the Nakbe archaeological site in the El Mirador Basin in Guatemala. 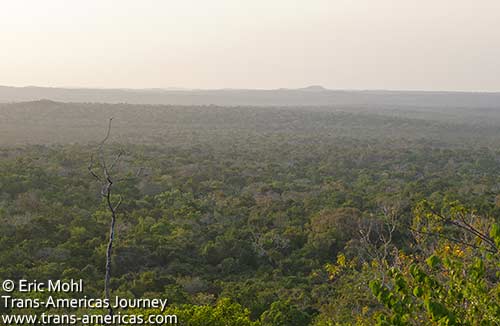 The view from the top of a pyramid in the Nakbe archaeological site in the El Mirador Basin in Guatemala. That bump on the horizon is the massive La Danta pyramid at El Mirador.

Getting from El Mirador to Nakbe had been the easiest and shortest day of walking on the entire trek so far. However, our guide Alex was careful to make it clear to us that the following day would require at least eight hours of walking to reach our next camp at La Florida. Even if we left before dawn we’d still be walking through the heat of the day. Alex wasn’t kidding.

We were up at 3:45 am and had eaten breakfast and packed up camp by 5:00 am, well before day break. We all hit the trail with our headlamps on, determined to cover as much ground as possible before the temperature started to rise.

By 9 am it was 80 degrees (27 C) on the trail. By 11:30 am it was 95 degrees (35 C) and the trail had become both hillier and less shady than the terrain on previous days. Even Alex started looking tired and Wiltur, our mule wrangler (or arriero), started singing “No voy a trabajar” (I’m not going to work) in a jovial way. We think he was only half-kidding. We amended it to “No voy a caminar” (I’m not going to walk) and it became the battle cry of the day, something we uttered to ourselves simply to keep going. 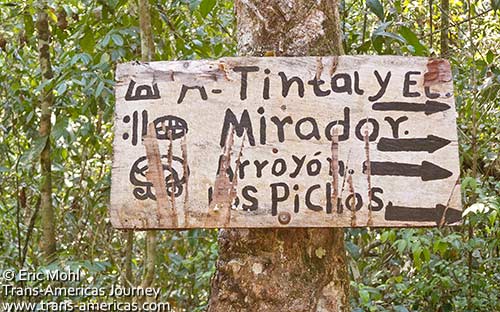 A hand made sign on the trail in the El Mirador Basin in Guatemala. Note the use of Mayan glyphs.

By 1 pm the temperature reached 99 degrees (37 C) and we stopped looking at the thermometer. Then the ticks arrived. About the size of a pinhead, the little suckers swarmed out of nowhere and were soon crawling all over us (they were especially fond of Eric’s hairy legs). While giving up was obviously not an option, let’s just say that all of us were ready for the trail to end.

Nine hours after we left Nakbe (eight hours of walking and about an hour of accumulated rest stops) we finally reached La Florida.The mules barely had enough energy left for their afternoon roll in the dust. 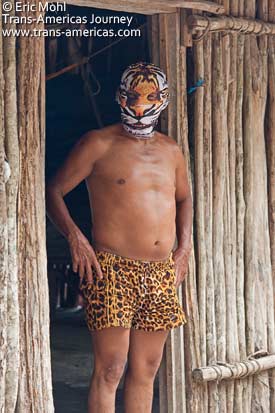 Just another day at the office for El Jaguar, caretaker of the La Florida archaeological site and costumed marathon runner.

Our spirits picked up as we were greeted by El Jaguar, the one-of-a-kind caretaker of the La Florida archaeological site. Also know as Miguel, El Jaguar is famous as a marathon runner who runs his races wearing jaguar print shorts and shirts–even his shoes somehow had jaguar spots on them. He greeted us wearing a jaguar mask and spotted short shorts.

Oh, and Miguel trains for marathons by running along the jungle trails we’d just been walking on, only he can do the stretch that just took us nine hours in just three hours. Incredible. He proudly shows us a flip book of photos of him from various marathons, always in his jaguar duds.

Not only is El Jaguar the most interesting caretaker in the El Mirador region, he also operates the nicest camping area. First of all, it’s spotless (even the pit toilet is clean). 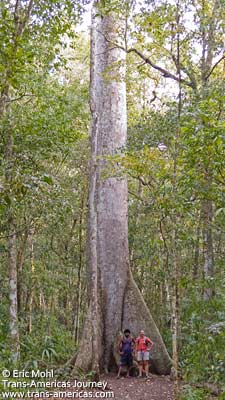 Karen and our guide, Alex, in front of the massive ceiba tree at La Florida archaeological site in the El Mirador Basin in Guatemala.

He’s landscaped the area using ornamental jungle plants. There’s even a lime tree. Everything is raked clean and there’s a thatch roof that shades a large area where we set up our hammocks and tents.

El Jaguar has also constructed a small shelter where he deposits bits and pieces he’s found while patrolling the La Florida site. Some of them rival what we’ve seen in museums, including an intact, intricate painted bowl with eyes and a nose sculpted into it.

Best of all, there’s a pond nearby which meant it was possible for all of us to take a refreshing outdoor bucket shower and wash the dust and sweat of the day away.

It’s a very short day of trekking from La Florida back to “civilization” in Carmelita so we all agreed to sleep in. Nevertheless, we were all up by 3 am anyway After breakfast we toured the tiny La Florida site. One highlight was an enormous ceiba tree (sacred to the Mayans as a link between our world and the underworld and the national tree of Guatemala). 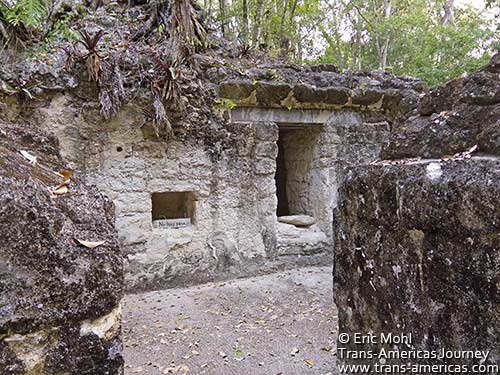 A unique walk-through structure at the La Florida archaeological site in the El Mirador Basin in Guatemala. 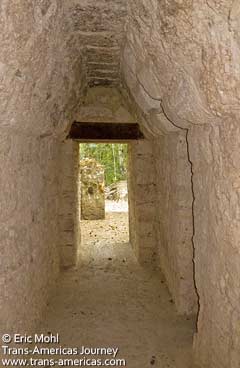 Inside the unique walk-through structure at the La Florida archaeological site in the El Mirador Basin in Guatemala.

The other highlight of the La Florida site is a temple that has been somewhat reconstructed and opened up so that you can walk through it, observing the layers of construction as you go. We’ve never been inside a Mayan building like that and it was eye opening.

By 8 am we were packed up and on the trail for the last leg of our journey. hours later we reached Carmelita where it did not seem too early for a few rounds of sort of cold beer and some well-earned pats on the back.

We’d completed a trek that was challenging at times and we admit to feeling just a bit proud when Alex told us we were fast–and that was after we’d already tipped him. 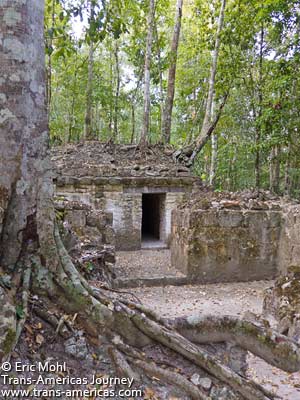 Outside the unique walk-through structure at the La Florida archaeological site in the El Mirador Basin in Guatemala. 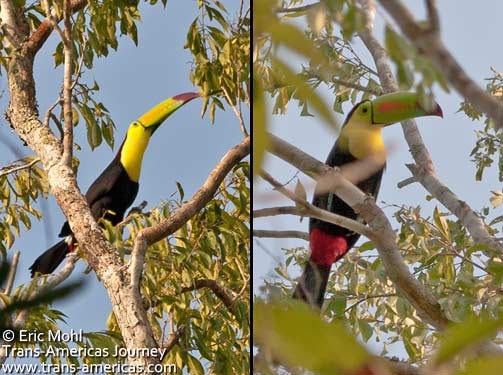 The jungle in the El Mirador basin was full of toucans, including these two above the trail as we walked from La Florida back to Carmelita.

Before you sign on the dotted line ask your tour operator these key questions:

1. Do you have insurance and an emergency evacuation plan if something goes wrong?

We asked both of those questions and were more than satisfied with the answers from Manuel Villamar of Tikal Connection tour company. In addition to full insurance and plenty of food, Manuel generously supplied his expertise (based on decades in the tourism business in Guatemala) and everything else we needed to get out to El Mirador.

You will be told that you must wear good, solid hiking boots. However, our boots, which we normally love, were too stiff for the trail conditions which often had deep ruts and holes baked solid into the concrete-like earth resulting in severely fatigued, almost bruised feet. We ended up wearing our Crocs with our hiking socks for a good portion of the hike and the roomy, flexible rubber proved much more comfortable and more than durable/supportive enough since we were only carrying light day packs (the mules carry the rest).

You will probably also be told that there is nowhere to shower, but that’s not true. At El Mirador a basic shower building has been set up (10Q or about US$1.25 for a five gallon bucket of water) and at La Florida it’s possible to take an outdoor bucket shower for free using water from a pond near the camping area. Both felt like heaven so bring your PacTowel and some eco-friendly soap.

The last thing you want during your El Mirador hike is rain which turns the trail into knee-deep goop. The rainy season in the region is roughly June through November. We had perfectly dry weather when we were there in March and it’s exhausting just to think about doing the hike through deep mud. But that’s exactly what the archaeologists do when they return to the site every summer.

The walk into and out of El Mirador is almost entirely flat and much of the trail is shaded under deep jungle cover, though that does little to cool things off.

Our hammocks. There are precious few places to sit down comfortably at the camping areas into and out of El Mirador and you can believe us when we tell you that after hours of walking through the jungle you will want a comfy place to relax. Our hammocks were the perfect places to collapse plus they broke the ice with our guides. Alex, of course, had his own hammock with him and our mule wrangler Wiltur taught us a clever, quick and easy way to string up a hammock.

Our Crocs. These were the perfect comfy camp shoes and we even wore them on the trail after our stiff hiking boots started to hurt too much over the unforgiving terrain.

Some cash: Needed to pay for the showers we totally enjoyed at the El Mirador site and the celebratory beer at Paty’s little store in Carmelita at the end of your adventure.

Our ExOfficio BugsAway pants and shirts: Though mosquitoes and other biting bugs were not nearly as bad as we’d feared our repellent-infused clothing kept any little buggers away.

If you have your own sleeping pad bring it. The camping gear supplied by tour companies that offer El Mirador hikes is generally fine but certain items, like sleeping pads, are in short supply. You might end up sleeping on a pile of old blankets like we did, prompting Eric to retire to his hammock at night.