Day 29 of our Journey

Look at this! A brand new state! We’re pretty proud of ourselves for finally breaking away from Louisiana, though we know we’ll be pulled back in before this thing is through. We already miss the oyster po-boys and drive-through daiquiris… 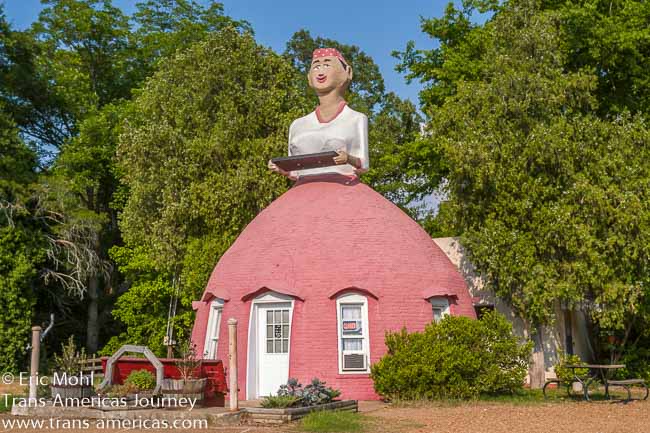 Sadly, Mammy’s restaurant in Mississippi was closed by the time we arrived.

But Mississippi has cool stuff too including rolling hills. We’d gotten used to the flat, flat, flatness of Louisiana but going up and down for a change was nice. We hit the brakes in Natchez and headed for an early lunch of southern style tamales, which are boiled in oil instead of being steamed just in case you were feeling too healthy. We get ours at Fat Mama’s Tamales which, in addition to making delicious tamales, puts a sticker on every quarter that says “follow me back to Fat Mamas.” Genius. 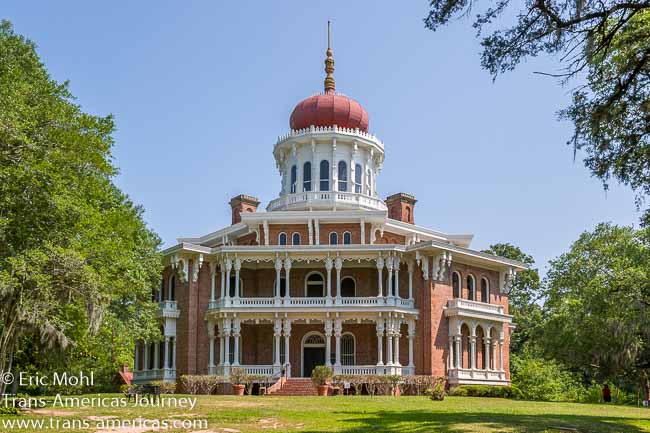 In case you forget where he lives, Port Gibson’s Golden Hand points to God.

The next morning we headed for Natchez Trace, a 400 mile (640 km) long scenic byway that roughly follows the route of an ancient foot and horse path which was originally used by the local Indians. In many places, the trail was so trafficked that it was worn down by feet, hooves, and wagon wheels and now lies many feet lower than ground level, giving the thing the appearance of a spooky trench. We walked along a short section of it and expect Ichibod Crane to come galloping down it at any moment, all headless and menacing. 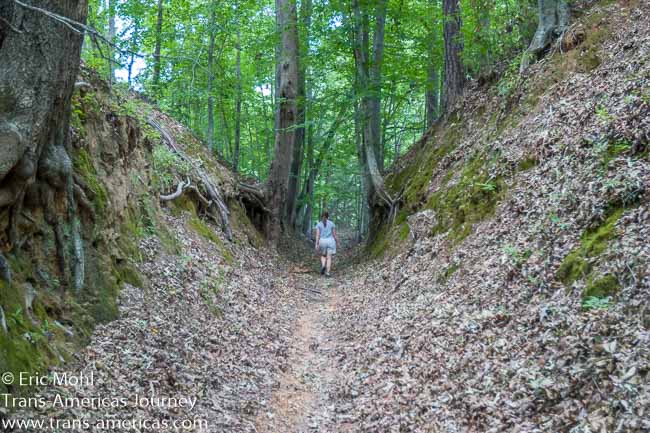 Karen walking along a section of the Natchez Trace in Mississippi.

The Natchez Trace roadway, by contrast, is bucolic. Surrounded by green, the road is well paved and has very little traffic. It almost makes you want to hop on a bike and do it that way. Almost. 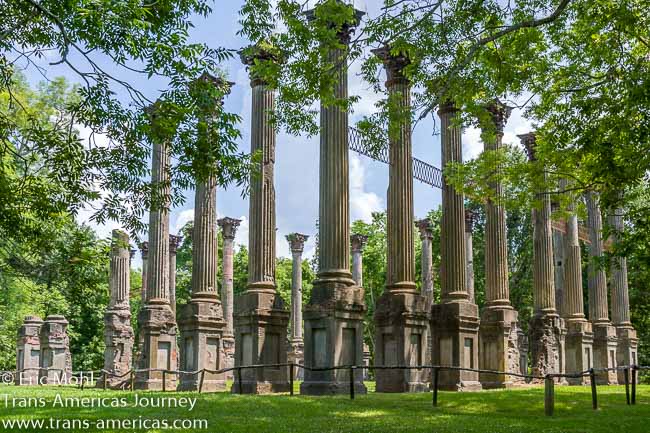 The Windsor Ruins in Port Gibson, Mississippi. This is all that’s left of a once mighty plantation.

We planned to drive the entire length of the Natchez Trace, but about 100 miles (160 km) in we got lonely for signs of life. There were no towns or villages along the way and we started to feel like we were missing an opportunity to see rural Mississippi. So we ducked off the Trace and zipped onto Highway 1 to Highway 61 through fields of baby cotton and adolescent corn. And thank goodness, because that’s the road that took us straight to the Shack Up Inn. 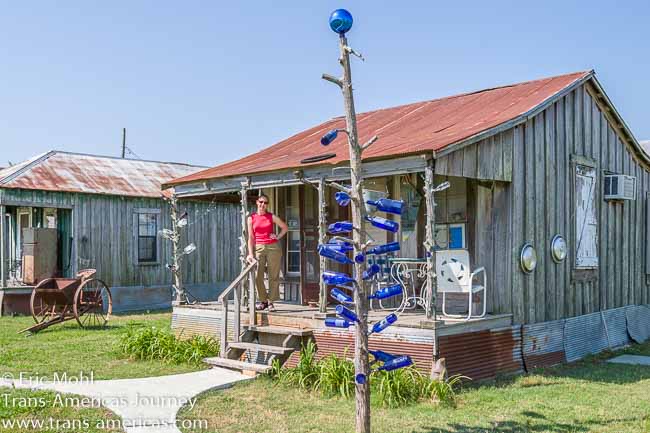 Karen admiring the booze art in front of the Cadillac shack at the Shack Up Inn.

Settling into the Shack Up Inn

“I’m in love!” That’s us about 30 seconds after we got out of the truck in front of the Shack Up Inn and we weren’t not talking about each other. The sun was setting, other (lucky) guests were collected on the lawn in the kinds of chairs that seem made for cocktails (which they were all nursing), and then we met our host, Bill. Here before us was the kind of man we should be manufacturing more of. 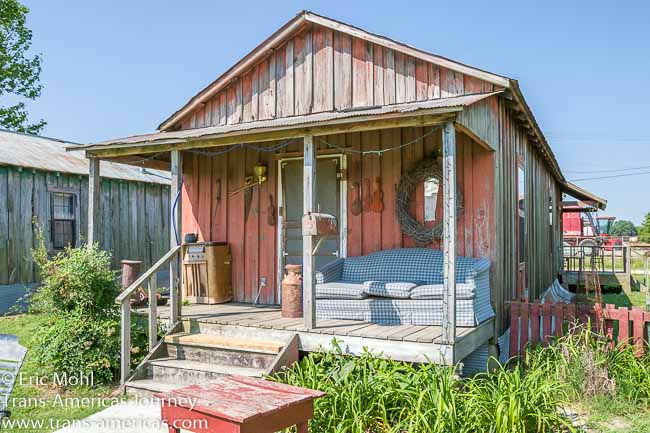 Karen’s favorite shack at the Shack Up Inn, the Fullilove.

Growing up near Clarksdale, Bill developed a natural love for the cotton gin. For reasons he chooses to keep to himself, he left his beloved Mississippi and spent time in Texas. “Long enough to know I hated it,” he says. What he knew that he loved was his hometown, so he returned in search of a place to settle.  He found it in the form of an abandoned outbuilding on the defunct Hopson cotton farm, home of the first automated cotton picking machines (they worked 13 of the 16 original cotton picking machines—at least one is still rusting away on the property).

The historic Hopson Commissary next to the Shack up Inn (left) and one of the first International Harvester Automatic Cotton Picking machines (right).

After turning the outbuilding into the kind of home where walls are unnecessary but beds made out of branches are crucial (and very, deeply cool), Bill turned his quirky attention to other abandoned Hopson buildings and moved six tumbledown shacks (lovingly referred to as the six-pack) to his property. After installing modern plumbing, modern bathrooms, vintage (but working) kitchens, and A/C (but, blessedly, no TVs), he got down to the real work: programming satellite radio to the blues channel in each shack and that’s the soundtrack that greets you when you walk in for the first time. 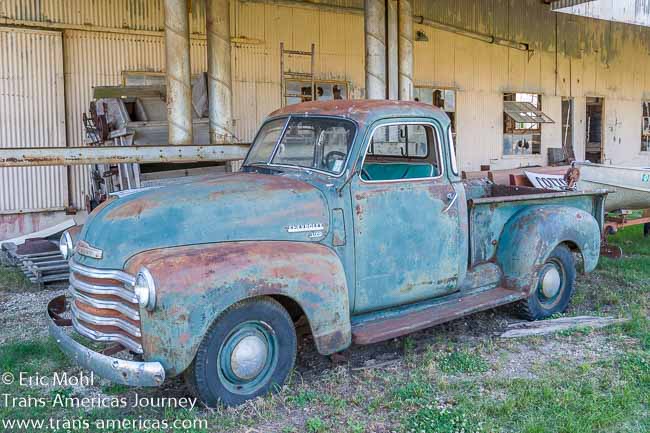 He also employed multiple thrift stores’ worth of Delta/music memorabilia to decorate each room (our personal favorite is the Fullilove shack). Classic LPs are nailed to the walls of the porches above the tattered sofas. Old flyers for local shows stand in for wallpaper. And it’s all either found or recycled. It’s a dream even before your head hits the pillow. You even get a mini-moon pie at turn down each night instead of a mint. 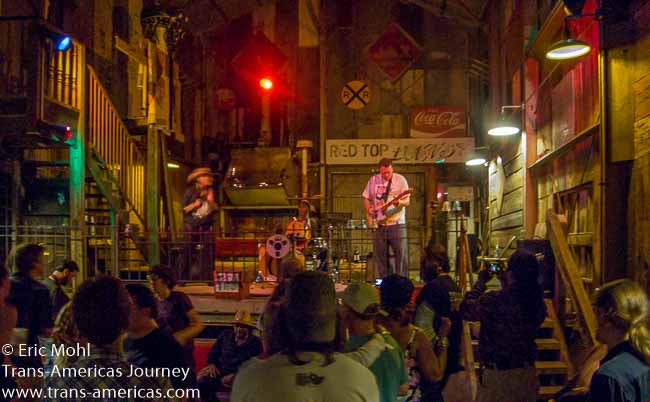 Live music at the Shack Up Inn.

The result, friends, is the ultimate place for Delta Blues lovers to lay their heads. It’s even located at the intersection of Highway 61 and Highway 40 where more blues legends than we have the time or energy to list here were either born, made, or died. Bill humbly calls his place the first B&B in Mississippi, which is true when you realize B&B stands for Bed & Beer. “I can’t cook breakfast, but I can open a beer for you,” he rationalizes. 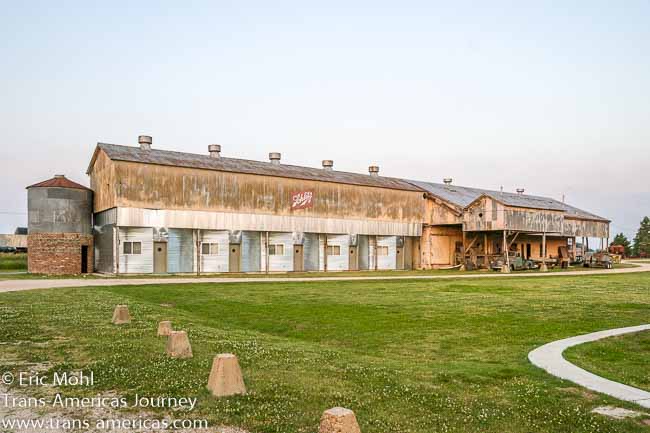 The new, fancier bins at the Cotton Gin Inn provide rooms even your mother would approve of.

The latest steps taken? The addition of five bins in the adjacent Cotton Gin Inn. Now, don’t be fooled by the term “bin.” These units were added to address the needs of folks who might find the creaking floors and musty memorabilia of the shacks too much for their vacation. Each bin comes with satellite TV, handicap accessible bathrooms, blow dryers, and a much sleeker/cleaner design. Though Bill does still sneak a harmonica and copy of the Preferred Hotels of the World directory into the room just to make sure your funny bone still works. 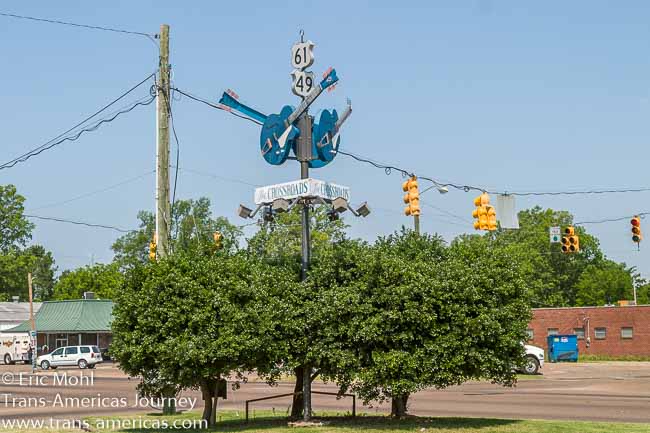 A marker at the intersection of routes 49 and 61, a crossroads rich in musical history. Is this really where Robert Johnson sold his soul to the devil so he could play the blues?

After getting the lay of the land from Bill, we head out to Ground Zero Blues Club, the Clarksdale bar/music joint owned by Morgan Freeman who grew up not far from here and continues to live in the region and support its growth by promoting education and local business. 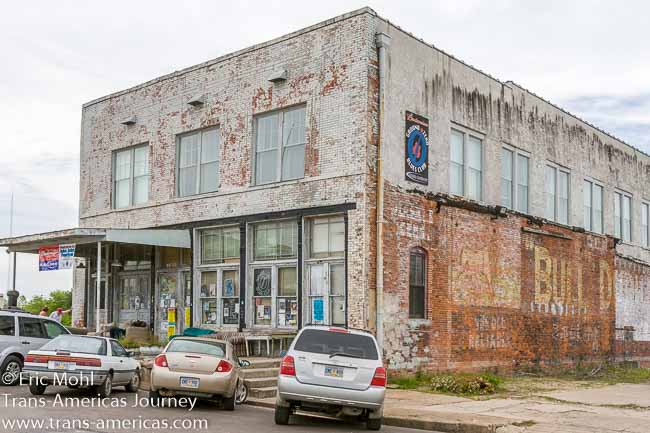 It’s mid-week and don’t say we didn’t warn you: most food joints you want to eat at (including Abe’s Bar-B-Q) are closed by 9 pm if it’s not Friday or Saturday night. We grab grub where we can (don’t ask) and head over to Ground Zero Blues Club for some music and a cocktail. Which bring us to this: what does the South have against ginger ale? Honestly, it’s been a challenge to get the stuff since we left Manhattan. Order a Maker’s and ginger and most bartenders (including the one at Ground Zero) manufacture a not-so-close approximation of ginger ale by using the soda gun to mixing cola and Sprite or 7-Up. It has to stop. 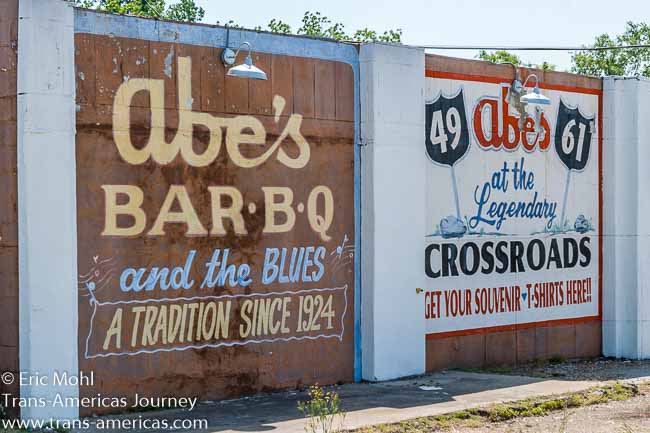 Famous bbq at a famous crossroads.

We can’t remember the name of the band that played that night, but there was this kid of about 12 or so who sat in on guitar and he was unforgettable. Sure he was nervous and didn’t quite have the stage presence thing down yet. But when everything went his way he glowed and we couldn’t help but feel maybe we were seeing the next BB King. When the club closed around midnight (remember what we said about early weeknights…), an old white Mercedes pulled up and a girl of about eight jumped out of the backseat and bounded into the club as if on cue. Two seconds later she walked out with her brother and his guitar and they jumped into the Mercedes and went home.