We recently traveled back home to New York City for an overdue visit with family and friends. While we were there we made it a priority to visit the National September 11 Memorial & Museum. We lived just two blocks from the Twin Towers of the World Trade Center on the day of the terrorist attack and like millions of other New Yorkers, US citizens and people around the world, that day changed our lives forever (including inspiring our Trans-Americas Journey). 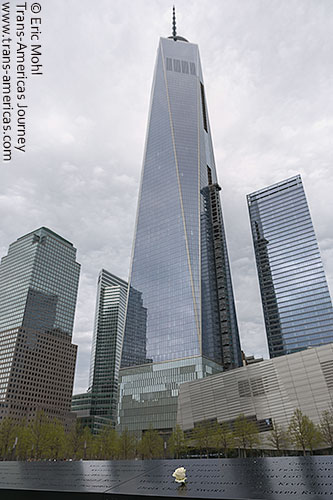 The Freedom Tower, the tallest skyscraper in the Western Hemisphere, soars above one of the two reflecting pools at the National September 11 Memorial & Museum in New York City.

Is this the most complicated tourist attraction on earth?

After so many years of pushing and shoving to find the “right” way to memorialize Ground Zero and honor the victims. A staggering  5,201 submissions from architects and designers from 63 countries were submitted for the project and everyone, it seemed, had an opinion about what was appropriate for Ground Zero.

We wanted to see what had finally been created on hallowed ground where 2,753 people from around the world lost their lives during the terrorist attack on the World Trade Center on September 11. 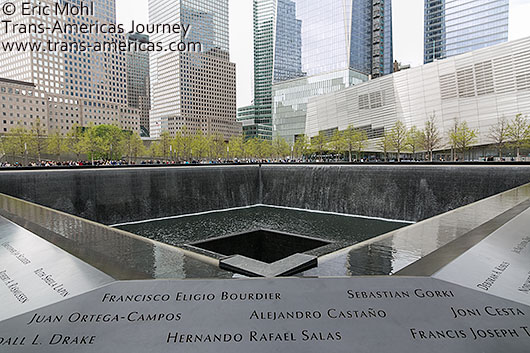 The National September 11 Memorial is made up of two reflecting pools created in the footprint of each of the Twin Towers.

The memorial portion of the National September 11 Memorial & Museum consists of two large, outdoor reflecting pools constructed in the exact footprint of each of the Twin Towers. Each square pool is recessed into the ground and has four walls of 30 foot (8 meter) tall waterfalls and a final waterfall in the center. The falling water was strangely peaceful as it rushed into the mysterious central space in a never-ending flow. 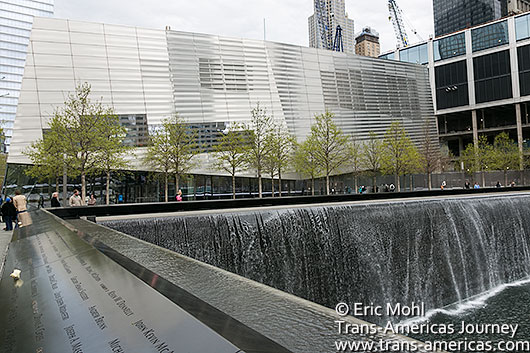 Each of the two reflecting pools at the National September 11 Memorial are recessed cubes with four walls of 30 foot (eight meter) waterfalls.

The city of New York expects the memorial and museum to be major tourist attractions. The memorial brochure is printed in eight different languages in an attempt to communicate with visitors from across the globe. 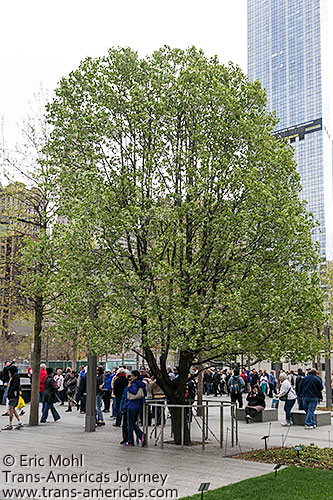 The so-called Survivor Tree at the National September 11 Memorial & Museum in New York City was salvaged from the wreckage of the Twin Towers and now flourishes as part of the outdoor memorial.

Family members of victims are encouraged to place a white rose in the name of their loved one, adding an element of softness and life to the memorial. Another unexpectedly moving part of the memorial, for us, was the so-called Survivor Tree. A mere eight foot stump when it was found in the wreckage of the Twin Towers, the pear tree was nursed back to life and has been re-planted in the midst of the memorial.

When we visited the memorial, the museum had not yet opened. Now that it is open to the public we think we’re glad we didn’t get the chance to visit it. While we understand the purpose of a September 11 Museum we don’t understand why it had to be constructed on the site itself. Though we had friends who should have been in the towers on September 11 but miraculously weren’t, we don’t personally know anyone who died in the terrorist attack. Still, putting a museum on a spot that represents he final resting place for so many seems unnecessarily close.

Also, the US$24 museum entrance fee (the outdoor memorial is free) feels slightly offensive, though we were happy to learn that every Tuesday night between 5 pm and 8 pm (last entrance at 7 pm) entry is free and, of course, family members of the victims and 9-11 rescue and recovery workers are always welcomed free of charge.

We’re not the only ones who have a sort of sick feeling about the museum and this piece written by the brother of a victim expresses those misgivings, as he tours the museum, very, very eloquently. 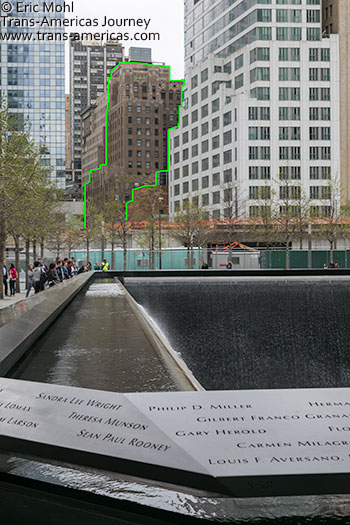 The neon green line outlines the building we lived in on the day of the attacks on the World Trade Center just two blocks away.

The World Trade Center was our neighbor

We returned to New York in 1999 after a four year backpacking trip through South and Southeast Asia and we immediately moved downtown to the financial district. The area was being rejuvenated and rents were affordable. We found a great one bedroom apartment and settled in. Our most dynamic neighbor was the World Trade Center and for years the Twin Towers, just a few blocks away, factored into our view and our daily lives.

Our history with these buildings is complicated and visiting the National September 11 Memorial & Museum was both settling and unsettling. Here are some of our own memories. 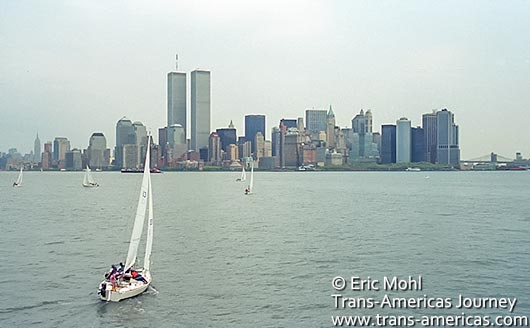 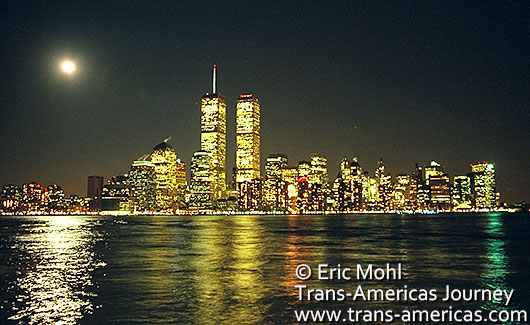 The Twin Towers were always most beautiful at night. 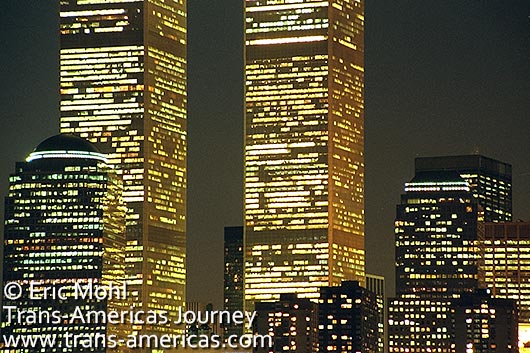 Sparkling Twin Towers dominated the New York City skyline and the view from our apartment three blocks away. 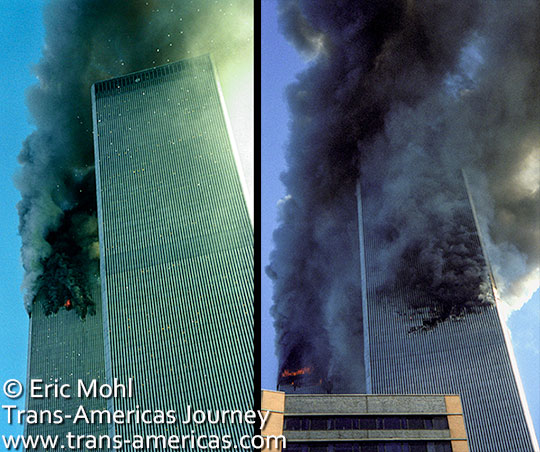 On the morning of the attack Eric was on the roof of our apartment building taking photos of the chaos. These shots were taken minutes after each of the two planes impacted the towers. 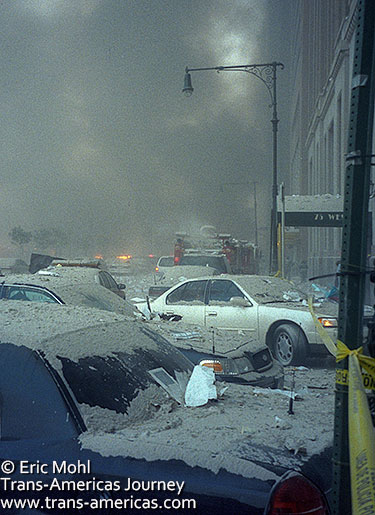 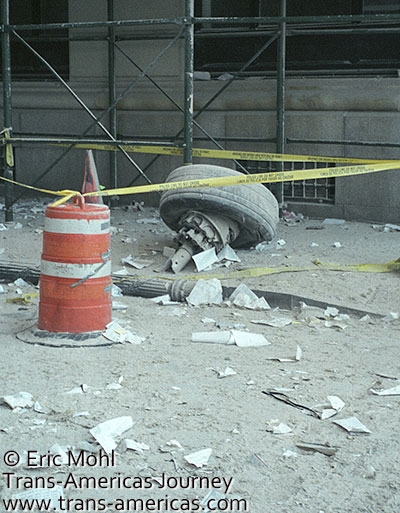 Landing gear from American Airlines flight #11, which crashed into the North Tower, landed near the entrance to our apartment building. 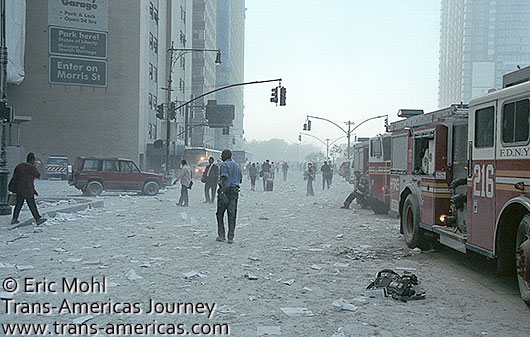 Seconds after this photo was taken the second tower collapsed. 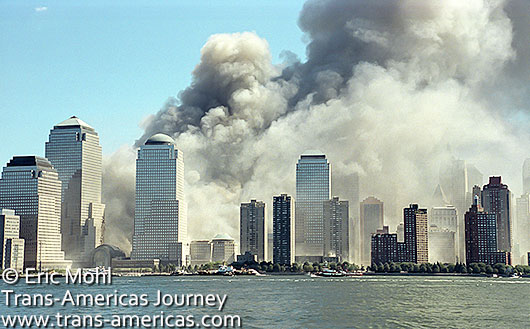 As Eric was evacuated across the Hudson River to New Jersey, lower Manhattan looked apocalyptic as the World Trade Center burned. 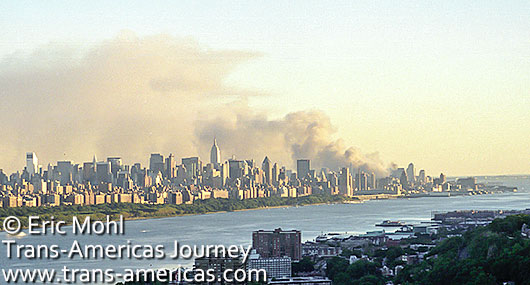 Lower Manhattan smouldered for days, a constant reminder of an attack we were all still trying to comprehend. 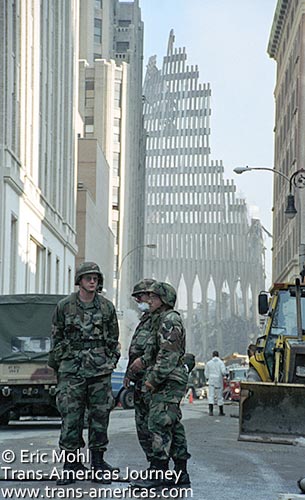 The National Guard was called in to man the streets of lower Manhattan, much of it an FBI crime scene (including our apartment building, seen on the left), in the weeks after the terrorist attack on September 11. 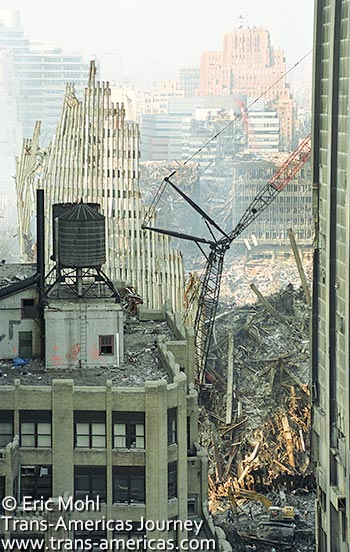 The angular wreckage of the Twin Towers from the roof of our apartment building. 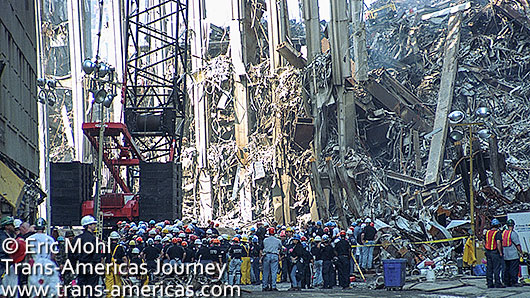 It seemed like the rubble would never get cleared away from the site or from our minds. This shot was taken from the front of our apartment building looking two blocks down Washington Street. 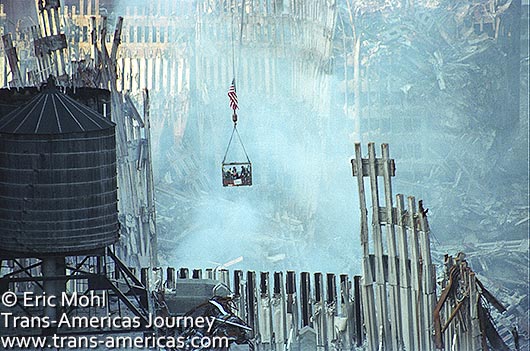 Still-smoking Ground Zero as seen from the roof of our apartment building. 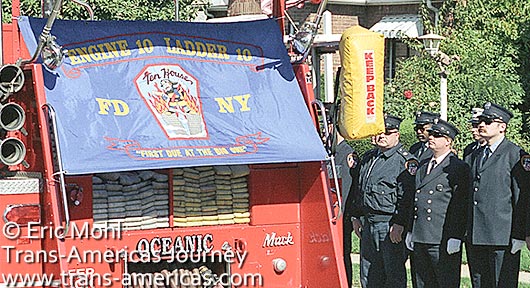 One of the heartbreaking number of funerals held for firemen from the Ten House in our neighborhood who died trying to rescue people from the stricken towers. The prophetic banner on the back of this fire truck shows the slogan and emblem for the Ten House: a firefighter standing atop the burning Twin Towers with the words “First Due At The Big One”  written below. 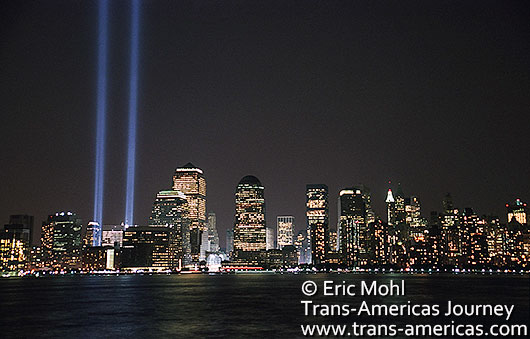 As people argued over the best plan for Ground Zero, Towers of Light kept the tragedy in our hearts and minds. 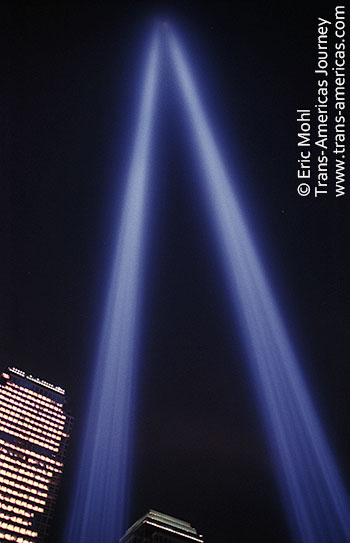 As people argued over the best plan for Ground Zero, Towers of Light kept the tragedy in our hearts and minds.

Find out more about how the terrorist attack on the Twin Towers of New York City’s World Trade Center inspired our Trans-Americas Journey.