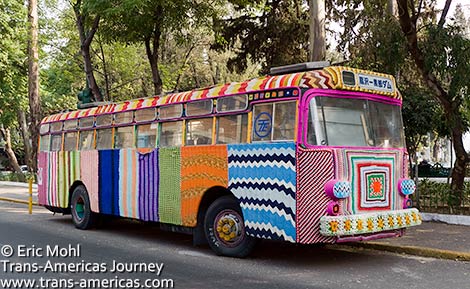 This macrame bus was parked on a street as a semi-permanent art installation in the Roma neighborhood of Mexico City.

The Roma neighborhood of Mexico City

The Roma neighborhood is most like New York’s East Village or Brooklyn before it got all fancy. Roma’s got grit, but it’s attractive grit with energy and an open mind. The shady sidewalks have cracks and the occasional spilled garbage can and they’re generally filled with hipsters in DIY fashion, big guys walking tiny dogs, people carrying yoga mats, you get the picture.

Gay pride flags are increasingly common in Roma and we once walked past a skate shop here that was staffed by slouchy teenage guys playing with a real live lion cub in the middle of the shop. True story.

Roma is also home to our beloved Non Solo Panino café and restaurant located on tranquil Plaza Luis Cabrera. We love it for laid back people watching, a real slice of the neighborhood, and generally affordable bistro-style eats even though they raised their wine-by-the-glass price from 25 pesos to 40 pesos (about US$3.00) since the last time we were there. 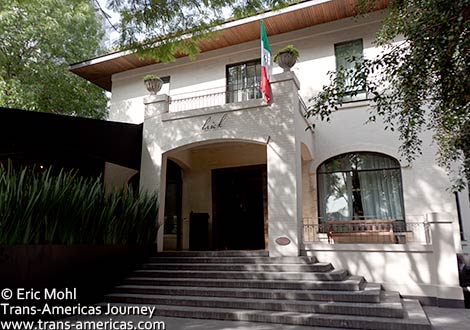 Brand new Hotel Brick in the Roma neighborhood of Mexico City is buttoned-up and super-cool at the same time.

Best bed: The brand new Hotel Brick does the best job we’ve seen lately of melding hip (the hotel’s bar, lounge and restaurants have become instant hits with Roma locals who help create a vibrant scene most nights) and full-service. Like the neighborhood it’s in, this hotel manages to be buttoned-up and bohemian at the same time.

The Condesa neighborhood of Mexico City

Welcome to Soho, Mexico style! You can’t swing a cat without hitting a model or an actor in the cooler-than-you Condesa neighborhood where the stores are expensive, dinner starts at 10, and you’d better be on the guest list. 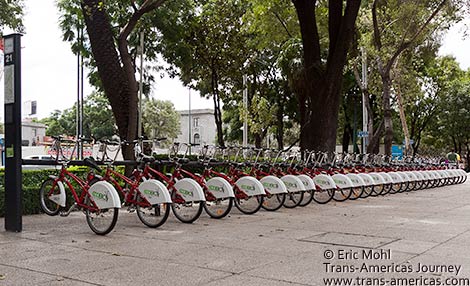 Just a few of the hundreds of bicycles that are part of Mexico City’s Eco Bici bike-for-rent program.

The fairly competitive/on display vibe is tempered by big leafy parks and plenty of cafes and bars to wind down in. Mexico City’s admirable Eco Bici program, which has placed hundreds of bicycles for short or long-term use in automated kiosks across the city, has really taken off in the relatively-traffic free streets of Condesa. 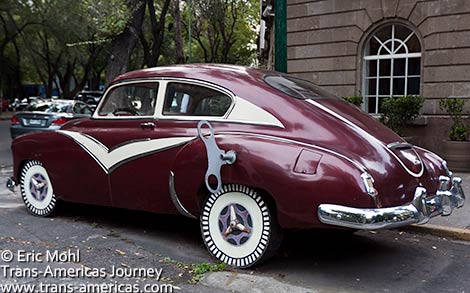 A vintage car/art installation in front of Condesa df hotel in the Condesa neighborhood of Mexico City.

Best bed: Condesa df hotel has anchored this neighborhood for years and continues to provide spaces for the cool to congregate, particularly the rooftop bar. Do not miss the tiny but chicly-stocked hotel store. 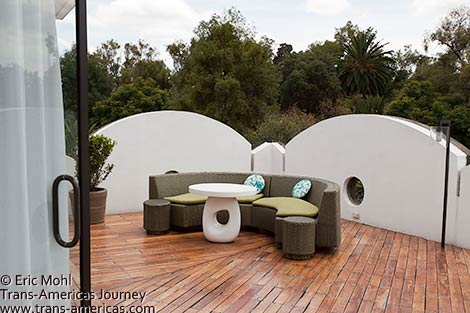 Welcome to the enormous patio that’s part of Condesa df hotel’s verison of a Presidential Suite. It’s located just below the hotel’s A-list roof lounge (is that Bono at the bar?).

The Polanco neighborhood of Mexico City

On the surface, the Polanco neighborhood reminded us more of Beverly Hills than New York but after a day or two its charmingly diverse and gritty side shows itself and makes us feel right at home–if a bit under dressed.

The main four-lane boulevard through Polanco is a shopper’s Shangri La with gleaming stores from Hermes to Chanel to Marc Jacobs to Bulgari to Tiffany, just to name a few. In fact, shoppers come here from around the world to get their hands on the season’s must-have waiting-list-only items which tend to be easier to score here than at stores in Manhattan or Los Angeles or Tokyo or Paris where you’re competing with so many more shoppers. 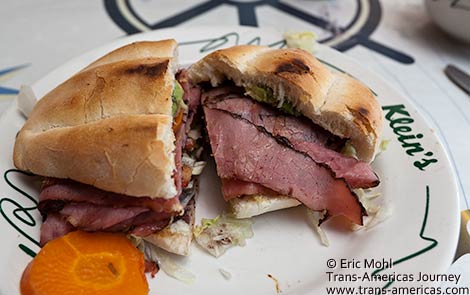 What passes for a corned beef sandwich at Klein’s in the Polanco neighborhood of Mexico City.

Polanco is also where Mexico City’s sizable Jewish population is centered and there are synagogues and Kosher food stores and restaurants like Kleins were we ordered a corned beef sandwich which was positively anorexic by New York standards.

This is also the neighborhood where Carlos Slim’s new US$750 million mushroom-esque Soumaya Museum (named after his late wife), is located. 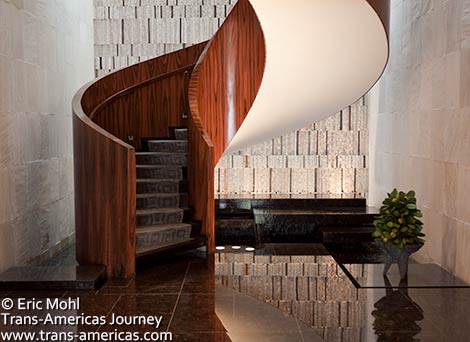 Another perfect element at Hotel Las Alcobas in the Polanco neighborhood of Mexico City. 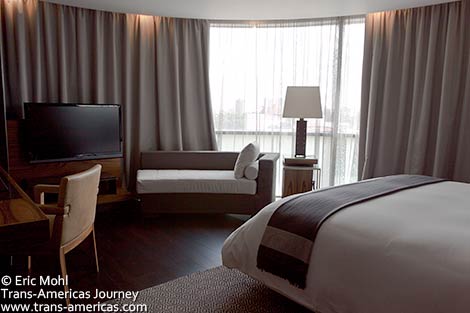 We’ve come to think of Hotel Las Alcobas in the Polanco neighborhood of Mexico City as a boutique version of a Four Seasons–it’s that perfect.

Santa Fe may not be the first most logical choice for a purely leisure traveler visiting Mexico City since it’s not convenient to the main attractions and museums. However, it’s a bit like Fifth Avenue with its mix of spending money (fancy stores, including one of only two Saks Fifth Avenue stores outside the US–the other one is in Dubai) and making money (corporate headquarters), making it ideal for business travelers. 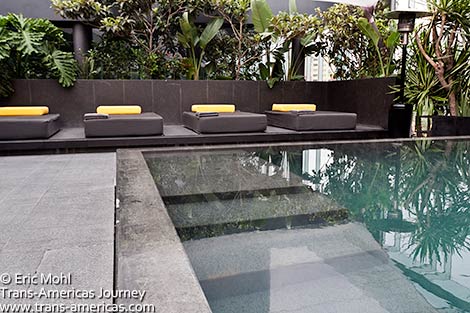 The pool/lounge off an inviting open-air bar at Distrito Capital Hotel in the Santa Fe neighborhood of Mexico City.

Best bed: The Distrito Capital hotel delivers some of the most exciting design we’ve seen plus awesome views over the Mexico City valley (all hotel rooms are located on the top three floors of an apartment tower). 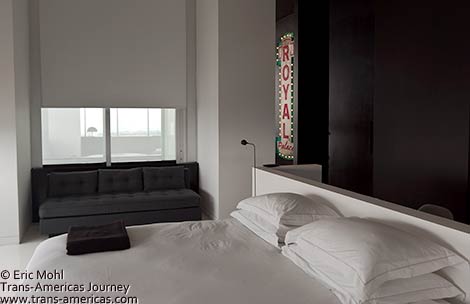 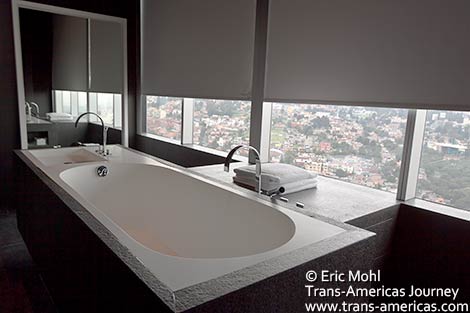 A bathtub with a view over the Mexico City valley from Distrito Capital Hotel in the Santa Fe neighborhood.