Way back when we were still living in New York City, one of the world’s top Year’s Eve celebration locations, we usually stayed home on December 31 leaving the streets to the tourists in town to watch the ball drop through beer goggles mashed in with thousands of strangers. But this year we took part in New Year’s Eve traditions in Ecuador with new friends at their awesome Anaconda Lodge on an island in the Napo River in the Amazon where we toasted with champagne, watched fireworks on the horizon, and burned the Ecuadorian President (sort of). 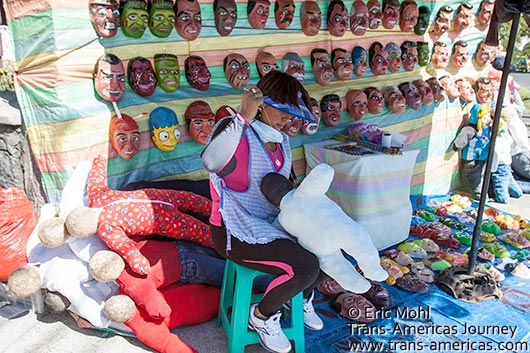 A woman works on effigies at her temporary road side stand in Quito, Ecuador in the days leading up to New Year’s Eve.

It’s not New Year’s Eve without a burning effigy

They may drop a big glittery ball in New York City every December 31 at midnight but in much of Latin America, the night is illuminated by the burning of tens of thousands of monigotes which are effigies that represent the año viejo (old year) and are burned in homage or in disdain to make way for the año nuevo (new year). 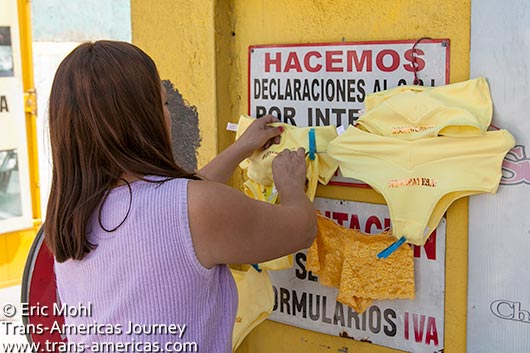 Yellow underwear for money and red underwear for love…just one of the many New Year’s Eve traditions in Ecuador and around Latin America.

If it’s more travel you want in the new year just run around the block carrying an empty suitcase. You can also register a wish for each month by thinking of what you desire while eating one grape for each month. If you haven’t had too much champagne, you can jump over the effigy fire 12 times registering a wish for each month as you leap. Many people also write down something that they hope to leave behind with the old year and jam the paper into the effigy to be burned along with it.

The tradition of burning away the worst of the old year may date back to the late 1800s when a yellow fever epidemic swept through Guayaquil, Ecuador prompting many to burn things in order to eradicate the contagion. To this day Guayaquil is home to the most elaborate monigotes in the country which can be more than 30 feet (9 meters) tall and are paraded through the streets before being burned.

Before we left Quito and headed for the Amazon we picked up a less than life-size version of Rafael Correa, the President of Ecuador, from one of many roadside effigy stalls that pop up this time of year. 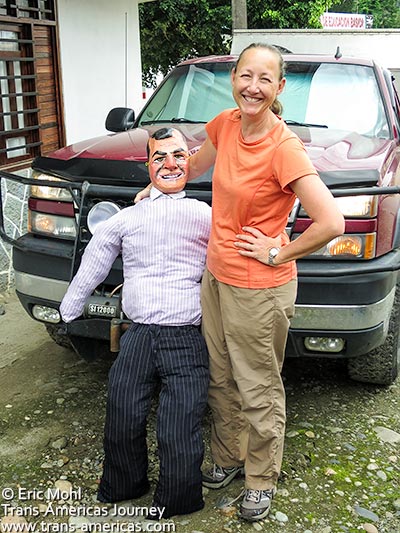 Karen and Rafael Correa, the President of Ecuador, before heading to the Amazon.

Our Correa was wearing cast off pin-striped pants and a jaunty lavender striped business shirt with a (formerly) white-collar. The old clothes had been stuffed with balled up paper to fill out the shape of a body, including a bit of a spare tire around the President’s midsection. We covered his head with a mask that exaggerated the President’s devilishly arched eyebrows, vast under-eye bags, and general menacing pallor. 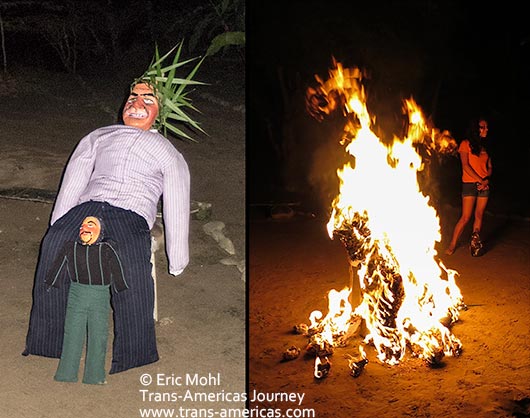 Our New Year’s Eve effigy of Ecuadorian President Rafael Correa on the banks of the Napo River in the Amazon before and after ignition.

Burning President Correa in the Amazon was fitting since many fear his policies disproportionately favor the interests of international companies that want to extract oil and other valuable resources from the region over the interests of the indigenous communities (and the flora and fauna) that call the Amazon home.

It was also fitting that we burned our effigy at Anaconda Lodge since owners Francisco and Silvia are passionate about sharing the beauty of the Amazon and the challenges its flora, fauna, and unique human cultures face. The prez, for his part, went up like a champ, but he left a big mess of ash behind. 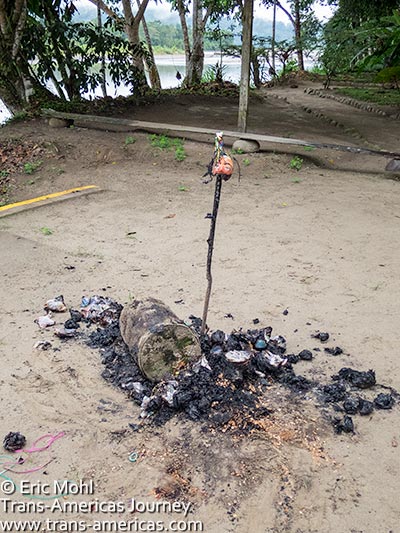 The messy morning after remains of our New Year’s Eve effigy in the Amazon.

Burning effigies and wish-granting underwear are not the only New Year’s Eve traditions in Ecuador (and in many other Latin American countries). Oh, no. The New Year is also marked by a less hot tradition: young men dressed as women representing the widows of the old year or the widows of the burned effigies.

We got caught up in that madness last year when we were driving near Quito and found ourselves stopped in traffic by a posse of positively dreadful versions of women (mostly just young guys flouncing around in their mothers’ cast off clothes). They humped car hoods, flashed fake cleavage, and generally carried on in ways no self-respecting actual woman ever would. The winch on the front of our truck attracted special attention. Ick. 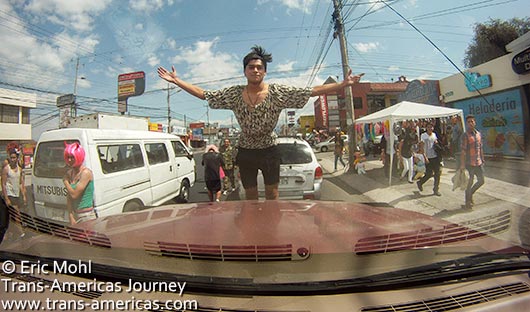 A new year “widow” assaults the front bumper of our truck.

Drivers, laughing nervously and desperate to get the heck out of the hussie huddle, deposited loose change in the palms of very masculine hands as the “widows” solicited their way through the traffic jam they created. Eventually, we were all allowed to pass (good thing too since we’d run out of change) and the widows, no doubt, headed to nearby shops for some cold beer. Flouncing is sweaty work.

This year we were spared the widows since the Quichua people who live in this part of the Amazon, quite sensibly, don’t go in for that particular tradition.