In January of 2013 Pinnacles National Monument, a well-kept California secret, was upgraded to national park status making Pinnacles National Park the newest national park in the United States. Now’s the time to travel to this park before word spreads about its caves, rock climbing, precipitous trails, campground with a swimming pool, and population of endangered California condors.

Just a few of the rock formations which give Pinnacles National Park in California its name.

A tentative comeback for the California condor

They’ve got a wingspan of nearly 10 feet (3 meters). They can fly up to 55 miles (90 km) per hour. They can live for more than 60 years. Yet they’re critically endangered. In 1987 experts estimated that there were only 22 California condors left in the world and those were summarily rounded up and protected in breeding programs.

These massive birds, the largest land birds in North America, may not win any beauty pageants (picture a vulture the size of a Smart Car) but they are a crucial part of the local ecological balance and they used to thrive in the Pinnacles National Park area before habitat loss and lead poisoning from bullets these scavengers ingest while eating carrion left over from hunters.

Now Pinnacles is an important release site for condors raised in captivity or rescued after injury and there are currently around 30 of the birds living in Pinnacles National Park. When we visited a ranger helped us spot three California condors perched in a tree on the hillside above the ranger station parking lot. If you want to keep an eye on the park’s population of endangered California condors, check in on images gathered by the Pinnacles National Park Condor Cam set up near a feeding station. 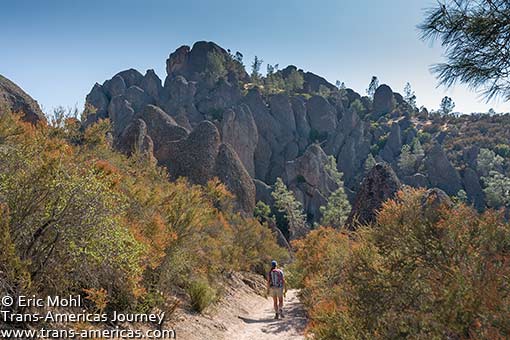 Anxious to see some more of these huge birds and explore the rocks and rock formations left over as a volcano slowly erodes, giving Pinnacles National Park its name, we headed out on the 5.5 mile (8 km) round trip Condor Valley/High Peaks Loop trail. 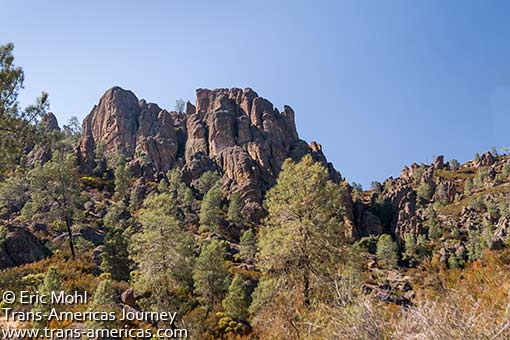 Rock formations like these make Pinnacles National Park in California a favorite of rock climbers and endangered California condors.

It was a blazing hot day and we literally dragged ourselves up the first section of trail to the highest point on the route which delivered us into the pinnacles themselves. The area is pockmarked with caves and many of the smooth spires are used by rock climbers. The only climbing we did was on the trail as it negotiated its way over enormous rocks via a series of steep and narrow stairs carved out of solid stone. 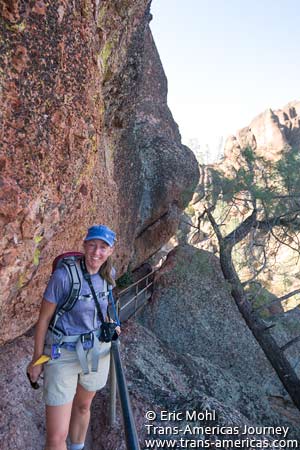 Karen on a stretch of the High Peaks trail that’s been chiseled out of a rock face.

We passed under low rock overhangs and slogged up inclines so steep that the park put in hand rails (thanks for that, by the way). It’s a unique trail through even more unique terrain (there’s even a short tunnel through a huge rock), but we didn’t see a single condor while hiking. 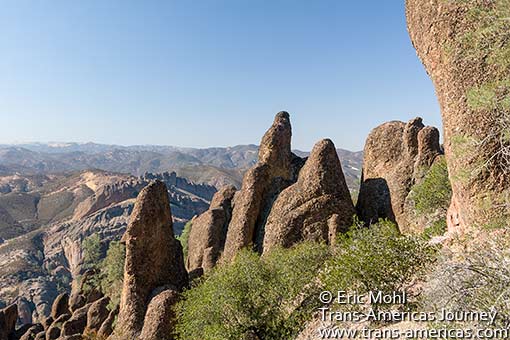 A ranger showed us some endangered California condors near the visitor center at Pinnacles National Park but we were also hoping to spot them soaring above us as we hiked the park’s dramatic High Peaks trail.

The park’s wild flowers are in full bloom and temperatures are most mild in the spring. Also, the campground at Pinnacles National Park has a swimming pool which is usually open from mid May to mid September. 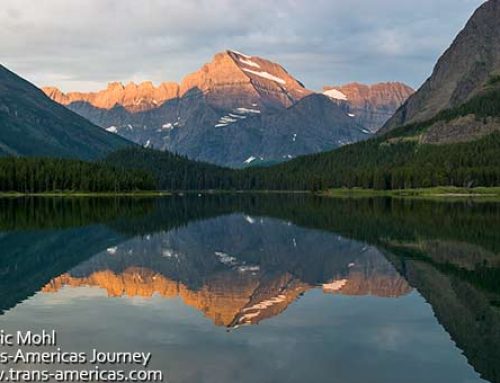