Few travelers make it to León, Nicaragua which is just one reason why León was our favorite city in Nicaragua. Even fewer people travel to the northern Pacific coast north of León, but they should. In fishing villages like Mechapa and on beaches like Aposentillo you’ll find great beach bungalows, perfect pizza, and the best road in the country. 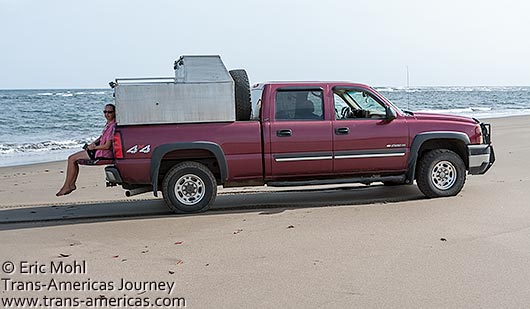 Karen hanging out on the tailgate during a break in our epic beach drive in Mechapa, Nicaragua.

Thanks to the completion of a fantastic new paved road, replacing one of the most notoriously brutal dirt roads in the country, you can now drive yourself to Mechapa from León in 1.5 hours or 3.5 hours from Managua (it’s tricky and slow by bus because service is limited and stops are many). 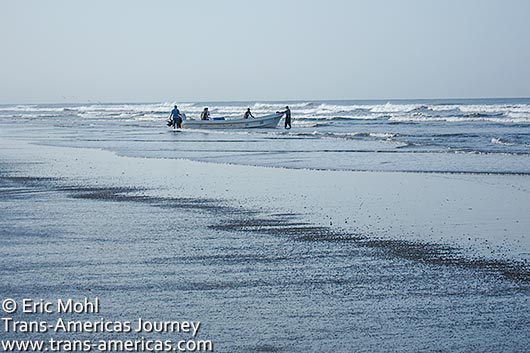 There are around 600 people living in Mechapa, most of them involved in fishing or working on the area’s sprawling peanut farms. There are a handful of closet-sized shops in the dirt-road-town and they peddle the basics. There are no restaurants or coffee shops or nightlife or tour companies of any kind but there is one friendly and comfortable beachfront hotel and, really, that’s all you need. 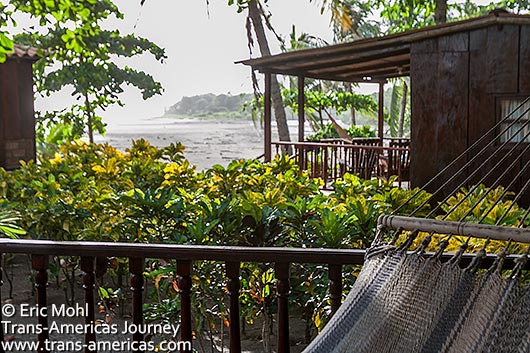 Beach view from the porch of one of the bungalows at Redwood Beach Resort & Restaurant in Mechapa.

The Redwood Beach Resort was originally built in 2000 by a man from Managua who planned on building 32 bungalows, a large swimming pool, and 16 condominiums. Only a handful of bungalows ever got built and he never opened the property.

In 2006 Mike and Stacy Vogelsang, a metal worker and psychologist from Illinois bought the 22 acre (9 hectare) property, sold everything in the US, and became hoteliers. There was no running water, no electricity, and no plumbing.

Today the Vogelsangs offer a full restaurant and six homey, comfortable beach bungalows (from US$65 per person per night including three meals a day). All are just steps away from the beach (#4 has the best view) with hammock strewn porches. 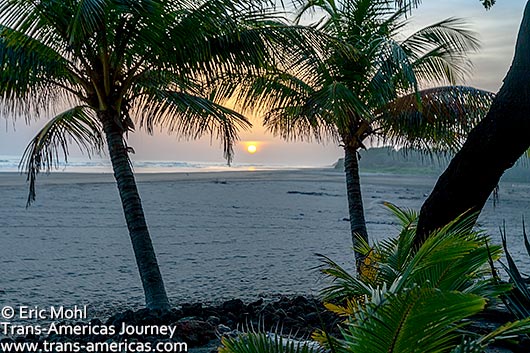 The best road in Nicaragua

While Nicaragua’s roads are far superior to those in many of the neighboring countries thanks to the fellow-socialists in Venezuela who provide cheap petroleum (asphalt is made from a mixture high in petroleum), we took one look at the 15 mile (24 km) long wide, flat, hard-packed black sand beach in front of Redwood  Beach Resort and asked one question: can we drive on that?

Come along on our epic 30 mile (48 km) beach drive in Mechapa in our 7-minute high-speed recap video.

Turns out, the owners enjoy a good beach drive too and assured us that as long as we timed the tides right we could drive for miles. Which we did, driving all the way down to the largest estuary in Central America. We saw plenty of birds along the way and no more than five other people. 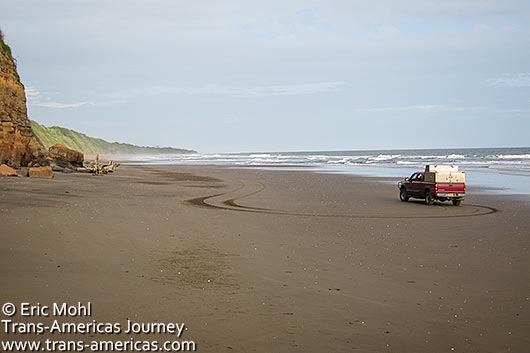 Our happy truck unleashed on the beach in Mechapa, Nicaragua. 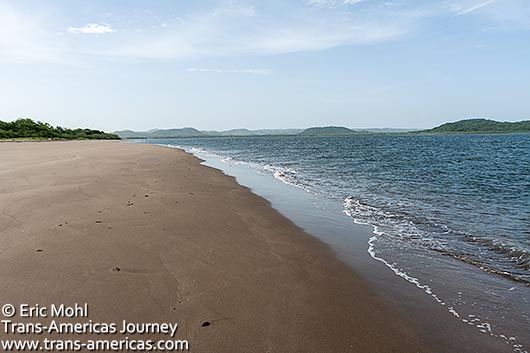 This end of the 15 mile (24 km) beach in Mechapa is home to the Padre Ramos Nature Reserve. 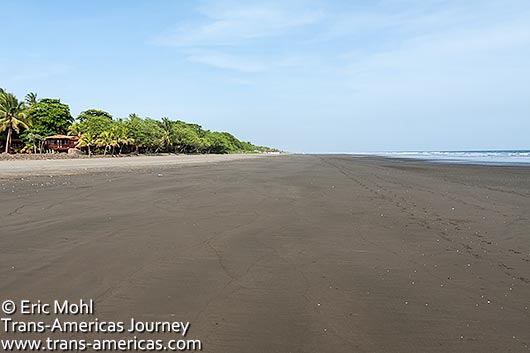 One of the bungalows at Redwood Resort & Restaurant peaks out of the jungle toward the beach in Mechapa, Nicaragua.

This is yet another reason to explore this part of Nica in your own vehicle.

Perfect pizza by way of Paris

Tipped off by Stacy and Mike from Redwood Beach Resort we made a point of stopping at Al Cielo Cabañas & Restaurant just above the surf breaks at Aserradores Beach while we were in the area. It was created by two friends from France, Xavier, and William, who decided to ditch the pace in Paris for the surf in Central America. 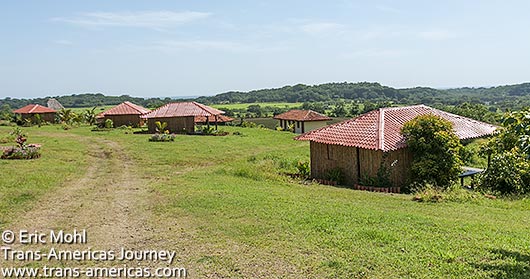 The pair were traveling and surfing along the Nica’s northern Pacific coast when they fell in love with a patch of land above Aserradores Beach which had been used to grow cotton. They bought it, cleared it, and did much of the construction themselves. 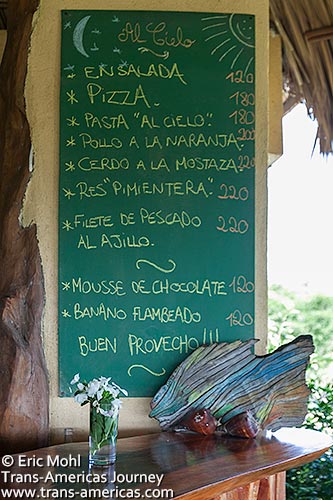 Everything on the menu at Al Cielo is homemade and delicious but do not miss the pizza.

Al Cielo has eight basic but comfortable wooden cabanas, some with shared bathroom (from around US$30 per night). All have views of the Pacific and breezy porches and there’s a pool. One of the country’s top surf beaches is just a few minutes away. However, the best thing about Al Cielo is the restaurant. 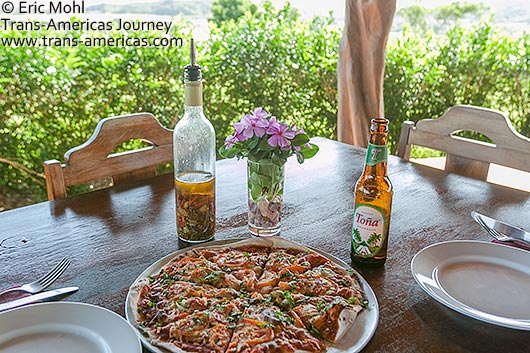 Behold, REAL pizza made from scratch by the French-trained chef who co-owns Al Cielo Cabañas & Restaurant on Nicaragua’s Pacific coast north of León.

Xavier trained in the culinary arts in Paris and, thankfully, he did not want to abandon his chef whites entirely. The restaurant at Al Cielo is now one of the most exciting casual restaurants in Nicaragua, attracting locals from the nearby city of Chinandega who make the 20-minute drive to the place just to enjoy the food and the views from the open-air, thatch roof dining room. 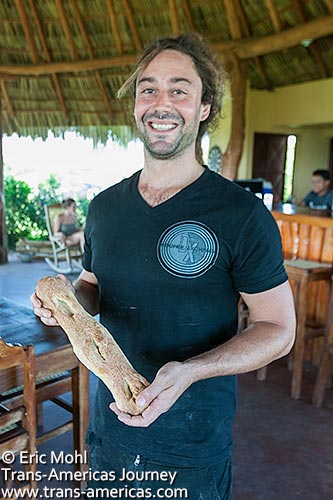 The menu is small, featuring one pasta dish, one fish dish, one meat dish (like pepper steak for US$8.50), a real salad (for around US$5), and pizzas. And what pizzas! Thin crust made using a slightly modified recipe given to Xavier by a mentor in Paris before he left, real Italian cheese, inventive toppings, and all cooked up in a real pizza oven for around US$7. No wonder Al Cielo made our list of Best Food & Beverages of the year. Oh, and don’t miss their Flor de Caña rums infused with goodies like hot peppers, vanilla, and ginger. 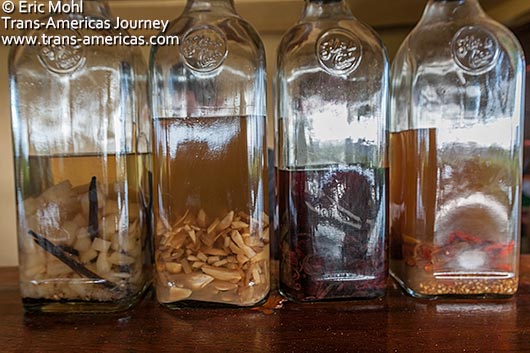