The Pacific Coast of Costa Rica has more than its share of beach towns but many of them are too full of gringos (looking at you Play Jacó) or too full of surfers (looking at you Dominical) to hold our attention for long. Travel a bit further south past Uvita to a stretch of coastline known as the Costa Ballena (Whale Coast) and you’ll find Ojochal where locals, expats, and a handful of travelers mix to create a welcoming charmer of a beach town with a laid back pace, great places to stay, and some unexpected foodie finds. It’s the perfect base from which to explore this stretch of coast which got its name because of the twice-yearly humpback whale migrations and awesome whale watching. 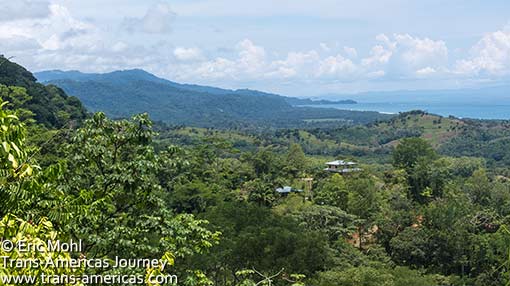 Honestly, we probably wouldn’t have even stopped in Ojochal at all if we hadn’t met Mac McIver. He was part of the fantastic group of SCUBA divers aboard Undersea Hunter’s M/V Argo live aboard dive boat during our epic trip to Cocos Island to dive with hammerhead sharks.

Being the generous and proud Texas transplant that he is, Mac invited us to his home, which is also home to his Bali Rica Casitas guesthouse in Ojochal which he runs with his badass wife Sharon. We, of course, called him up when we were passing by and the two of them quickly made us love Ojochal as much as they do.

Who knows why these things happen, but Ojochal has experienced a big influx of French Canadians. They (and foodie transplants from other parts of the world) brought their love of good food with them and now Ojochal has a higher density of noteworthy places to eat per capita than any other place we visited in Costa Rica during our more than 5 months in the country. Yes, that includes the capital, San José.

Be sure to check out the shockingly authentic Indonesian food at Ylang Ylang, homemade pasta at Fabrizio’s Cocina Italiana and absolutely passable pizza at Mamma e Papa. Ojochal also has not one but two outstanding bakeries. Sadly Citrus Restaurante and Exotica were closed when we were there. Next time…

The food scene is Ojochal is so vibrant that a regional nonprofit organization called El Sabor de Ojochal was started to promote local cuisine with food festivals, a restaurant week, and other seasonal events.

Drinking (in the views) in Ojochal

Ojochal is not on the beach (it’s on the inland side of the Costenera Highway), but many of its hilltops provide sweeping views of the Pacific Ocean. Hotel El Castillo occupies one such rise. The hotel was recently taken over by Scott Dinsmore and David Russell, creators of the successful Restaurante Azul in Dominical (which now operates out of the hotel) and its six spacious rooms (from US$99), lobby, bar, restaurant, and pool have all benefited from a refurbishment.

Even if you’re not staying at El Castillo, we recommend that you head to to the hotel’s dramatic lobby and pool for sunset cocktails. It’s the best ocean view in the area and the bartender knows what he’s doing. 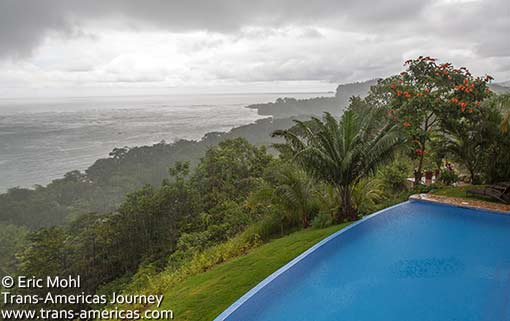 A moody sunset from the pool bar at Hotel El Castillo in Ojochal, Costa Rica on the Costa Ballena.

Ojochal makes a great base for exploring nearby natural attractions including Playa Ventanas (Windows Beach), one of the most unique beaches in Costa Rica thanks to a rock formation through which the surf has worn away twin tunnels (or windows) which fill and empty dramatically (and a bit dangerously) with the tides. 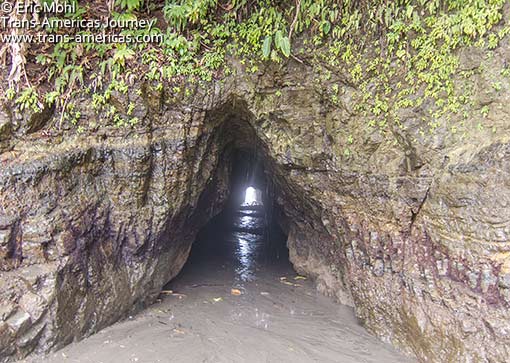 One of the dramatic ventanas (windows) the sea has carved through solid rock at Playa Ventanas on the Costa Ballena in Costa Rica.

Marino Ballena National Marine Park (US$10 per person) is home to one of the most iconic beaches in Costa Rica. Playa Ballena (Whale Beach) is so named because at low tide the exposed spit of sand looks amazingly similar to a whale’s tail. Be sure to check the tide tables before you visit this park since this beach is the centerpiece and it closes to visitors at high tide. 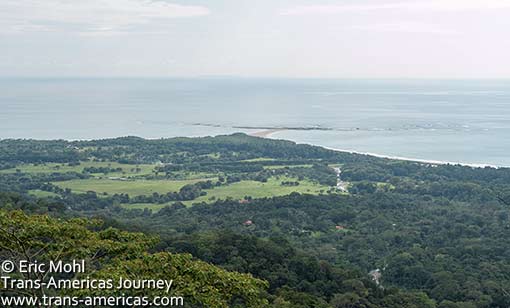 That spit of a beach jutting out into the Pacific Ocean looks like a massive whale’s tail at low tide and it’s the centerpiece of Marino Ballena National Marine Park on the Costa Ballena in Costa Rica.

And then there’s Cascada el Pavon waterfall, a lovely cascade through a rock chute that’s been worn so smooth it almost looks man-made. Water tumbles into a delicious swimming hole reached via an easy, short trail right off a back road around Ojochal. While you’re out there, be sure to stop at a nearby open-air restaurant called Tilapias El Pavon for the lightest, fluffiest fried yucca we ate in all of Costa Rica. 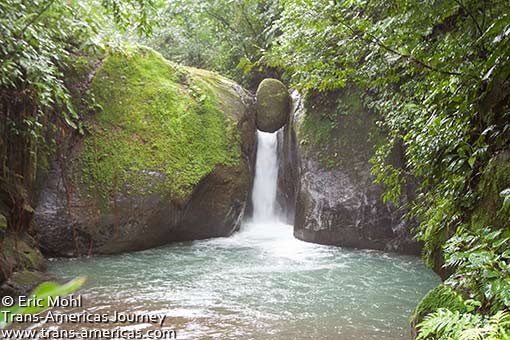 Let us know if that rock is still in place above Cascada el Pavon waterfall near Ojochal on the Costa Ballena in Costa Rica.

For romance, relaxation, and value for money you can’t beat Bali Rica Casitas, plus you’ll be in the gracious hands of our friends Mac and Sharon McIver. Choose your stand-alone casita with a kitchen on the garden property where toucans will be your only neighbors. 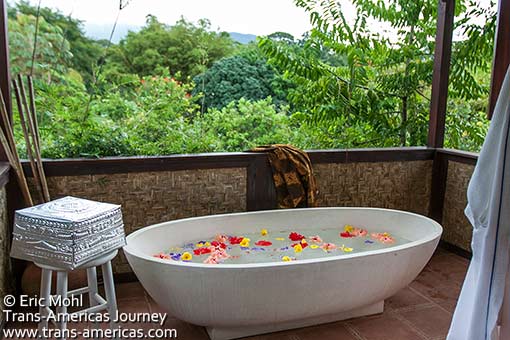 The dramatic (and very, very relaxing) soaking tub at the spa at Bali Rica Casitas in Ojochal, Costa Rica.

Accommodations at Bali Rica include Casa Bambú which has a private Jacuzzi and a cozy jungle cabin feel ($85 double). Casa Rica is a traditional Balinese structure that was shipped over piece by piece from Bali (US$125 double). It’s larger and even more romantic with a private plunge pool and private Balinese wooden gazebo. There’s also an on-site spa with one of the most dramatic soaking tubs in Costa Rica and a pavilion for yoga, meditation, painting, whatever. 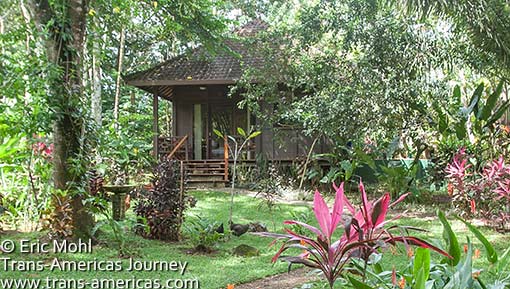 The Bali House casita at Bali Rica in Ojochal, Costa Rica is a traditional Balinese structure that was shipped piece by piece from Bali.

After our time in Ojochal we were ready to explore more of the hidden corners of the Pacific Coast so we jumped at the chance to do some house sitting for a homeowner with a spectacular home in the hills above tiny Playa Matapalo further north up the coast where sloths, toucans, and spectacular Pacific Coast views greeted us every day. 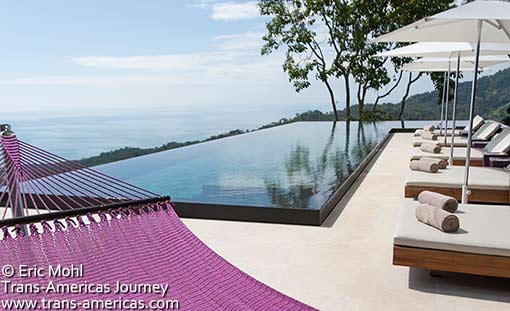 On our way to that house sit we paused not far from Ojochal to check out the best new luxury hotel in Costa Rica. Read our full review of Kura Design Villas. 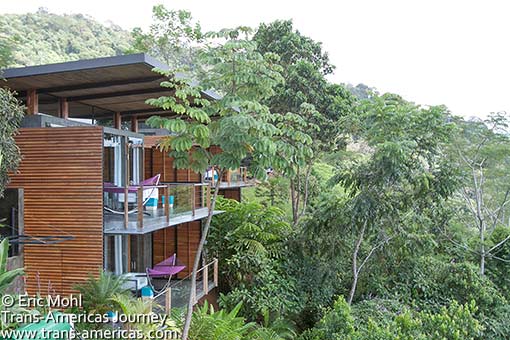 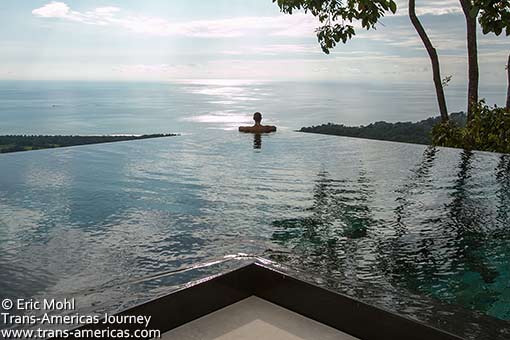