Legendarily brutal Spanish conquistador Hernan Cortés landed in Villa Rica de la Vera Cruz in 1519 and quickly moved on to La Antigua which is considered the first settlement in what was called New Spain. 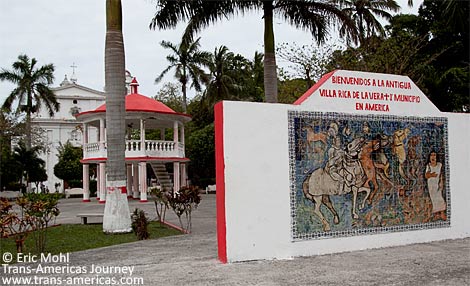 La Antigua, settled by Hernan Cortés in the early 1500s, is the oldest municipality in the mainland New World.

The name “Villa Rica” (rich village) referred to the gold that was found in the area. The words Vera Cruz (true cross) were added because Cortés and his gang landed on Good Friday.

Honestly, there’s not much to see in Villa Rica today except for the stone foundation of a fort perched on a spot which, to us, didn’t seem to afford a particularly advantageous view of the sea. That may help explain why, just a few years after settling Villa Rica, Cortés moved his whole operation down the road and established a town that is now called La Antigua and considered to be the first official town in the mainland New World.

Exploring the oldest town in the mainland New World

Today, La Antigua is a typically small and sleepy Mexican town that just happens to be home to what remains of some of the continent’s earliest colonial history. 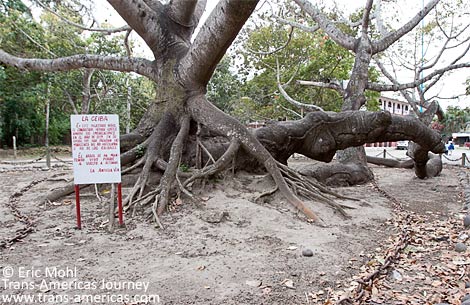 It is said that Hernan Cortés originally tied his boats to this tree in the early 1500s. Some say the chains that lie on the ground around the tree are from his ships. We’re not metalurgists, but its hard for us to believe that these chains are nearly 500 years old.

Like any self-respecting Spanish conquistador, Cortés set about building a church as soon as he got to La Antigua (God being second only to Gold). The Ermita del Rosario church, built in 1523, still stands and is the oldest church in the mainland New World. La Antigua also has the Edificio del Cabildo. Built in the early 1500s, it’s the first town hall in the mainland New World. 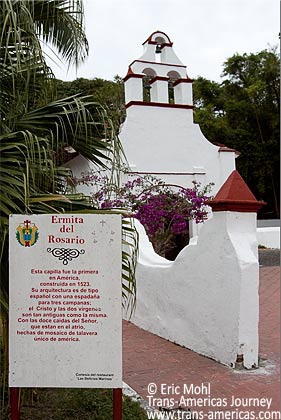 This church in La Antigua is the first church established in the mainland New World.

With a church and municipal buildings under way, Cortés began building a Customs House and Armory. Time, and incredibly determined tree roots, have left very little of the structure, which is now known as Casa de Cortés, standing. 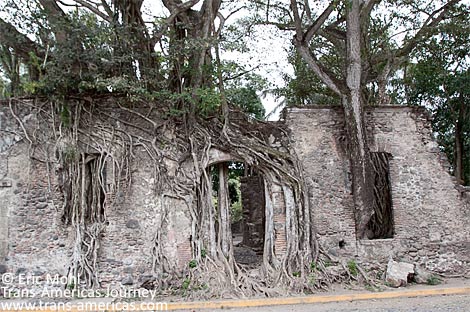 This is what remains of the Customs House and Armory, now known as Casa de  Cortés, in La Antigua.

The walls that are still visible reveal a beautiful and unique form of construction which used a mix of stones, big hunks of coral, and bricks from Spain which were brought to the New World as ballast on Spanish in the ships that went back full of gold pilfered from the New World. 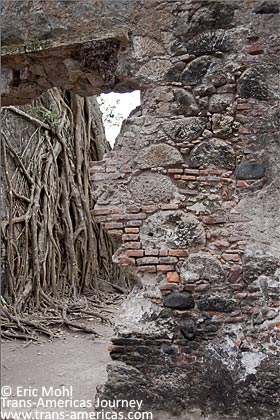 Builders used a uniquely mix of rocks, bricks from Spain that arrived as ship ballast, and big hunks of coral to build Casa de Cortés in La Antigua. 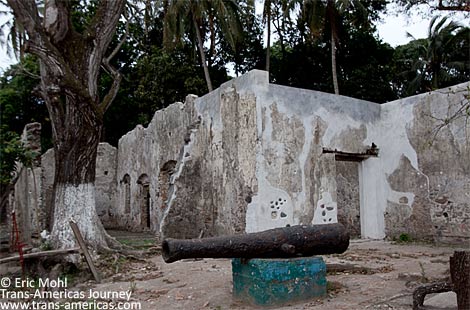 By the late 1500s, the Spanish needed an even bigger port so they shifted their focus and returned to Cortés’ original landing spot where they settled what is now the city of Puerto Veracruz.