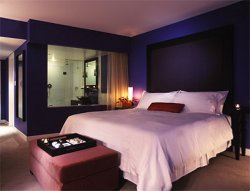 “I love her as a singer, but she was so cheesy as the MC,” says the glam Amazon-woman to her friend in the elevator at Opus Hotel. “She wasn’t MC-ing!” he shrieks, hiking up his $500 jeans as the doors opened on their floor. It’s the kind of conversation hip people have in a hip hotel and the 97 room Opus Hotel is the hippest roost in town. How hip, you ask. Well, Pam Anderson, who was born near Vancouver, was in the city during my stay and I expected to bump into her around every corner.

Just in case the paparazzi aren’t following you around, Opus Hotel has created five different fictional hipsters with their own customized Lifestyle Concierge profile of restaurants, shops, activities and attractions. Each hipster also has his or her own décor, color scheme and room type stocked with books and CDs that he or she would, theoretically, like.

I stayed in one of hotel’s Blue rooms which, in Opus speak, corresponds to “Susan” a fashion analyst from Toronto who’s a pop culture junkie.  The gimmick was fun at first—like a sophisticated version of charades. But then I realized that Susan was way more anxious to spot Pam Anderson than I was. Still, many return guests have gotten so attached to “their” Opus personality that they request the same color room for each visit. 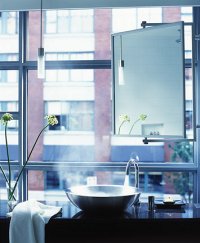 Regardless of the color scheme, every room comes with an Oxia Oxygen Personal Canister in the bathroom to combat the side-effects of  rock star caliber partying (use of this amenity spikes on weekends) and all mini-bar baskets contain Intimacy Kits. Bathrooms are stocked with L’Occitane bath products. Some rooms have iHome radios with iPod connections and all rooms will have flat screen TVs in 2007. Even the business center is chic (when was the last time that happened?), thanks to clear acrylic Mira chairs and mirrored desks.

Yes, it all feels very W Hotel (right down to the hotel’s prominent use of a single “O” initial), but back before The W lost the boutique hotel plot a bit and started to act more and more like what it is: the offspring of giant hotel parent company.

The see and be seen vibe of Opus Hotel is carried through to its elegant and bustling French bistro, Elixir, most noticeably in the bathrooms where nothing more than a faintly frosted pane of glass separates the women’s room from the men’s room and surveillance screens above the wash basins allow you to spy on people sitting at the restaurant’s bar. Order from the Petit Plats section of the restaurant’s menu, by the way. That’s where the most inventive dishes on an already inventive menu can be found. 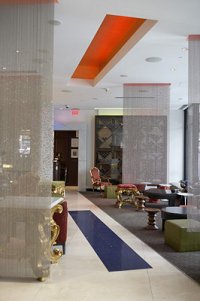 It should come as no surprise that, for the past three years, a stay at The Opus has been part of gift bags given to presenters at the Academy Awards (last year’s goodie bag also included a Frette cashmere travel blanket and a gift certificate to the Cornelia Day Spa). And, speaking of awards, the hotel has been presented with a few of its own. The 65 seat stark and modern Opus Bar, pictured left, was named Most Popular Nightspot by Zagat in 2006 and the hotel itself was named one of the world’s top 100 properties and #2 in Canada in Conde Nast Traveler magazine’s 2006 Readers’ Choice Awards. Opus Hotel also made it onto the list of the best 500 hotels in the world as compiled in Travel & Leisure magazine’s 2006 Readers’ Choice Awards.

Unlike most hotels, The Opus’ web site is entertaining and informative with a dishy, fun to read blog written by the energetic (and plenty hip) General Manager plus handy tools like floor plans of all room types and a shopping area called Oshop where you can pick up some Thomas Haas handmade truffles ($15) or a bottle of  Blue Mountain Pinot Blanc ($50) without  ever leaving your room—though the Yaletown neighborhood where the hotel is located offers plenty in the way of local boutiques  within walking distance to help you exercise your credit card the old fashioned way.

The first new hotel to open in Vancouver since The Opus debuted in 2002 is scheduled to be completed in 2007, ending Opus Hotel’s long run as the newest property in town. But I doubt it will end the hotel’s run as the hippest.