One of narco terrorist Pablo Escobar’s many haciendas has been reclaimed and turned into a tourist attraction with water parks, concrete dinosaurs, a zoo, and the largest herd of wild hippos outside of Africa. Welcome to Hacienda Napoles, the weirdest tourist attraction in Colombia. 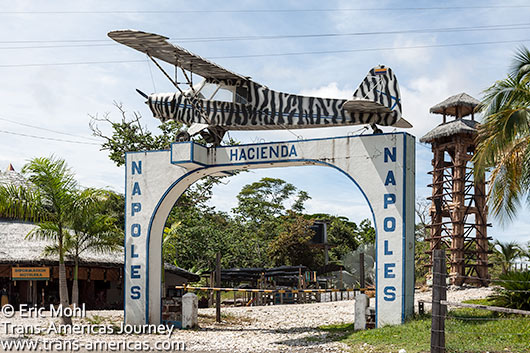 Pablo Escoabar put his very first drug running plane over the entrance to his Hacienda Napoles complex. New owners have painted it in friendly zebra stripes.

Inside Hacienda Napoles, the weirdest tourist attraction in Colombia

Pablo Escobar, the so-called King of Cocaine, was killed on a rooftop in Medellin, Colombia on December 2, 1993. Soon after, the Colombian government claimed much of the drug lord’s ill-gotten gain, including Hacienda Napoles located about four hours from Medellin. Escobar’s original complex covered 8 square miles (20 square km) and included a modest house, a private air strip, a helipad, a bullring, a small zoo, and a collection of concrete dinosaurs. 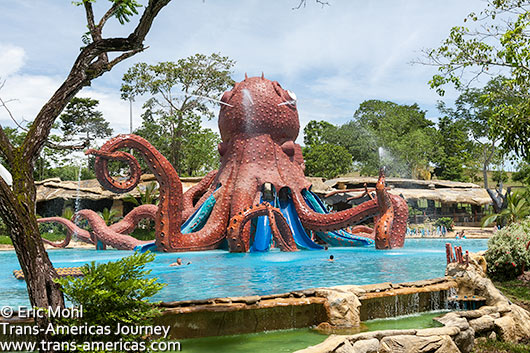 Visitors to the theme park created on Pablo Escobar’s Hacienda Napoles can get doused by a giant octopus.

“This is an opportunity to change the bad reputation of the place and turn the area into a good region for business, especially tourism,” park manager Oberdan Martínez told us. And so they set about erasing almost every trace of Escobar.

Escobar’s first drug running plane, which the narco terrorist perched atop the Hacienda Napoles entrance, was re-painted with friendly zebra stripes. Five theme hotels were built (Africa, Casablanca, etc) on the property. Escobar’s private bull ring was turned into an Africa Museum. A massive octopus now douses shrieking swimmers in a new water park that is as tacky as a Florida putt-putt course. 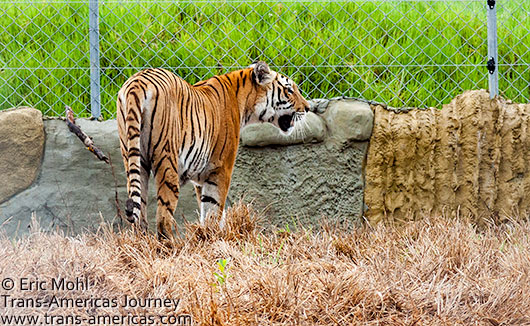 Operators of the theme part on Pablo Escobar’s Hacienda Napoles have expanded the narco-terrorist’s private zoo to include tigers and elephants.

The menagerie of animals that Escobar amassed in his on-site private zoo has been expanded to include lions, tigers, rhinos, jaguars, a pair of elephants, and more. Escobar’s original four hippos have, inevitably, multiplied many times over. Some have escaped and now constitute the largest wild hippo herd outside of Africa. 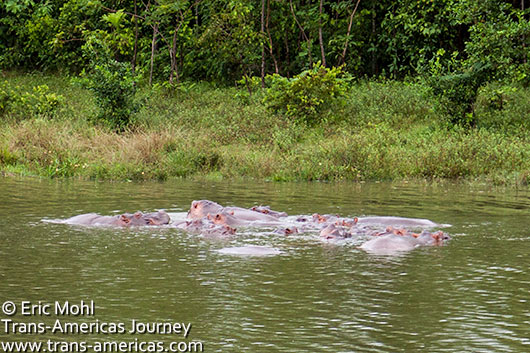 Pablo Escobar had four hippos as part of the private zoo he kept at Hacienda Napoles. These have bred and many have escaped, creating the largest wild hippo population outside of Africa.

Those looking for any insight into Escobar, however, will need a good guide to find it since Hacienda Napoles staff say they are discouraged from answering any questions about the infamous previous owner. We visited Hacienda Napoles from Medellin with Palenque Tours which is owned and run by two political scientists who believe Pablo must be presented in context. After gawking at the refurbished concrete dinosaurs which were originally built by Escobar for his son (though there’s no mention of that) we headed for the carcass of Escobar’s hacienda. 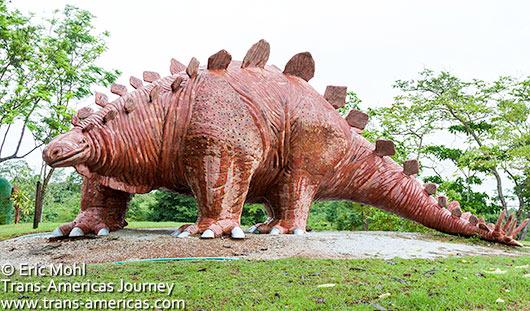 The King of Cocaine had a collection of giant concrete dinosaurs built for his son on the property of Hacienda Napoles. These are now part of the theme park that was developed on the property, but minus any mention of Escobar.

Ravaged by shovel-wielding locals looking for riches allegedly buried under the pool and inside the concrete walls, the surprisingly modest hacienda is now a shell. Its gutted rooms have been turned into the Museo Memorial (Memorial Museum) which presents a grisly visual timeline of Escobar’s life, rampage and death. There are no guides or staff and all displays are in Spanish. 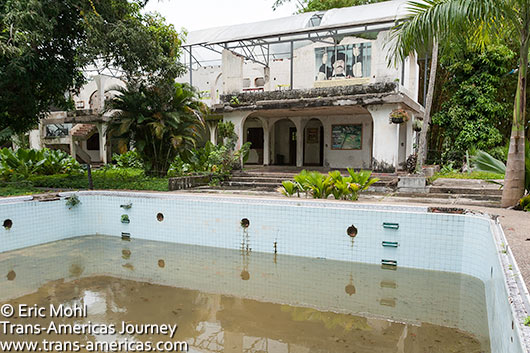 Escobar’s surprisingly modest house at Hacienda Napoles has been gutted by people looking for hidden riches. It now houses photos and media reports which chronicle the narco terrorist’s life and death.

As the piped-in, never-ending narration explains “Pablo Escobar’s blood trail is part of our history. We have chosen to follow that trail in reports the media made…to remind the new generation what we must not forget.” 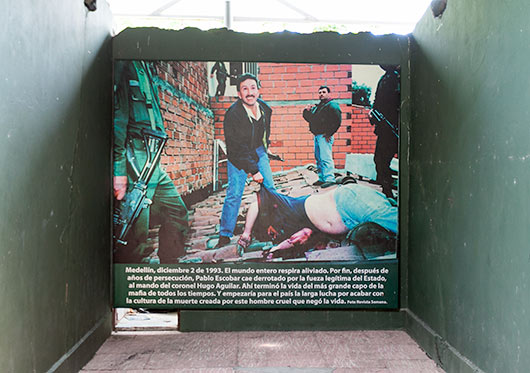 This display inside Escobar’s former house at Hacienda Napoles is from a newspaper report about his death on a rooftop in Medellin in 1993.

A Colombian family with two young sons were the only other visitors at the memorial. They did not enter the building or view the disturbing displays of bombings, corpses and fires but as they circled the algae-filled pool their oldest son said “Pablo Escobar killed people.” Then they left, perhaps to go toss carrots into the waiting maw of Vanessa, a nearly tame hippo who now lives just steps away. 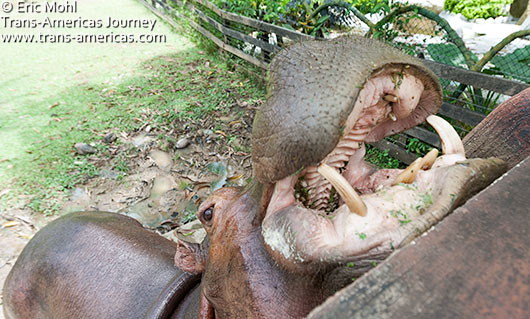 For more, check out our award-winning piece about controversial Pablo Escobar narco tourism in Colombia which was published by RoadsandKingdoms.com.