We begin this post with a reminder: We are travel journalists. Our job is to observe, experience, and convey what we see, learn, eat, drink, and do as faithfully and engagingly as we can. It is not our job to make moral judgments (we’re not sure whose job that is, but we’re positive that it’s not ours). And now, we present this post about Pablo Hermoso de Mendoza, a Spanish rojeneador rock star in the bullring. 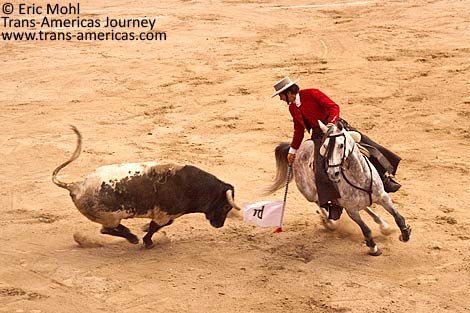 A rejoneador uses his horses in place of a matador’s cape to entice the bull to chase. This requires astounding agility and bravery on the part of the horse. Here Pablo Hermoso de Mendoza also uses a small flag to get the bull’s attention.

Pablo Hermoso de Mendoza in the bullring in Mexico

Pablo Hermoso de Mendoza the world’s best rejoneador. What is a rejoneador? A rejoneador is a bullfighter who works on horseback, not on foot. It’s far less common than on-foot bullfighting and requires that the bullfighter not only be in control of the bull, but also in control of his horses.  Pablo Hermoso de Mendoza trained himself and his magnificent horses in secret in his native Spain for more than a decade before performing in public.

Pablo now dominates the world of rejoneadores. He is suave. He is commanding. Fancy magazines put him on their covers. Women wear extra-high heels and extra-low tops to the bullring when he’s performing.

Pablo last performed in Mexico in 2006, so his 28 date tour in 2010 was met with considerable excitement. We caught up with him near the end of his tour at the Plaza de Toros in a small town called Teziutlan. 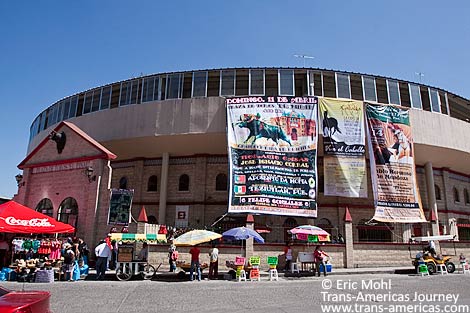 The Plaza de Toros in Teziutlan was built in the 1950s and was the first covered bullring in Latin America.

Built in the early 1950s, the bullring in Teziutlan was the first covered bullring in Latin America and it’s not exactly large—it probably holds less than 4,000 people—so we were relieved when there were still tickets available (200 pesos, about US$11, each) when we got there a few hours before the day’s fights. Pablo was scheduled to fight two bulls on a program that included traditional matadors as well. 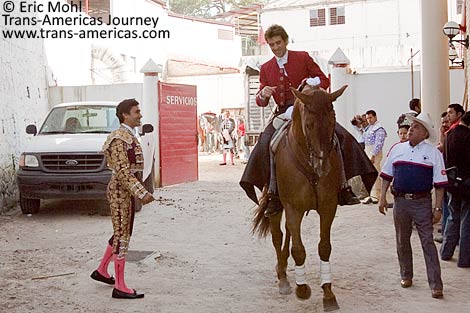 Spaniard Pablo Hermoso de Mendoza, the best rejoneador in the world, warms up before fighting two bulls from horseback during a rare tour of Mexico.

We entered the plaza de toros around 2 pm and found the place nearly empty so we were able to grab good seats (though not the ones right on the rail of the bullring–those were reserved). Over the next hour the plaza began to fill up with Mexicans of every age and from every walk of life from grandma’s with their knitting to gorgeous young couples to whole families.

We’re pretty sure we were the only non-Mexicans there. Roaming vendors plied the crowd with everything from peanuts and beer to shot glasses, coffee mugs and seat cushions with Pablo’s face on them. 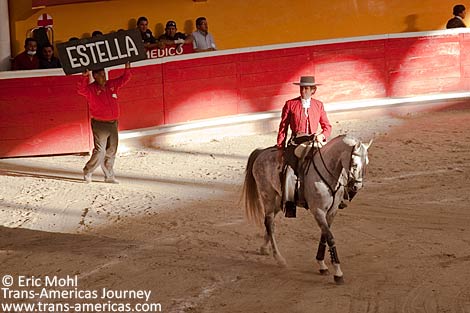 Rejoneador Pablo Hermoso de Mendoza enters the historic plaza de toros in Teziutlan on one of the many amazing horses he rides during this unique form of bullfighting. We love that Pablo ensures that each of his horses gets its own name card as it enters.

Our video, below, of Pablo’s performance with his first bull of the day, an enormous creature named Dali, gives a good overview of what a rejoneador bullfight on horseback is all about. 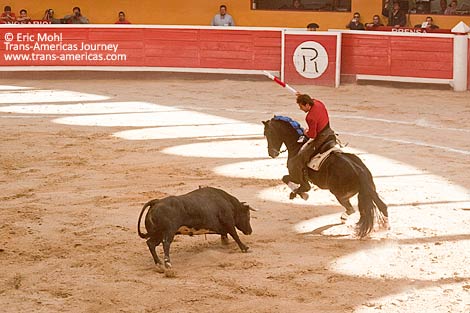 There are many elements or rounds in a rejoneo, giving it a similar pacing to a traditional bullfight. One extremely interesting difference during Pablo’s performances was the inclusion of a team of men called forcados who perform what’s called a pega de cara (face catch). Yes, this is as crazy as it sounds. Essentially, a team of forcados line up and the first guy in line runs at the bull and grabs it by the face. What happens next is a sort of forcado pile up as all of his friends clamor onto the bull until it can’t move.

The scrolling slideshow of 13 images, below,  from the pega de cara portion of Pablo’s first fight, takes you through it.

Despite the drama, pega de cara events are usually safe and injuries to forcados are rare. Check out the scrolling slideshow of 18 images, below, from the pega de cara event during Pablo’s second fight to see what can happen when things do go wrong. 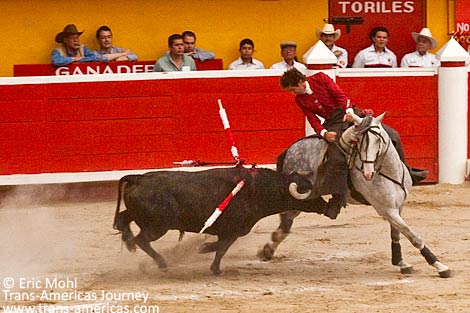 Pablo Hermoso de Mendoza’s horses come from private stables and they’re bred and trained to have strength and agility to get their rider close to the bull while darting out of the way of those horns.

Pablo is beautiful to watch in the saddle, often riding with no hands and leaning out of the saddle nearly parallel to the ground as he wields a battery of pointy objects designed to ultimately bring the bull down. Purely as a display of horsemanship, Pablo’s performance and his horses’ athleticism, smarts, and attitude (sometimes even seeming to taunt the bull) were breathtaking. 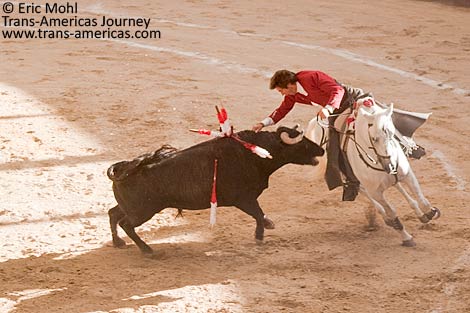 Pablo Hermoso de Mendoza and one of his hores in action.

Rejoneadores ride different horses during different portions of each fight and each horse excelling at different tasks. Pablo traveled from Spain with many horses and he rode at least five different horses during his two bullfights in Teziutlan. As he rode each one out into the bullring someone walked behind him carrying a huge card bearing the horse’s name—Caviar, Estella, Pirata, Tazini, Silvetti. 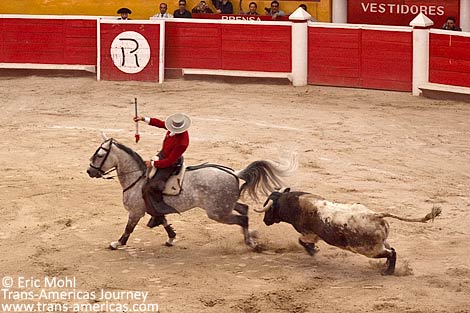 A different horse works its magic for Pablos with a bull in pursuit.

The horses essential acts as Pablo’s legs, a vital extension of his (or her) own body, and they must possess extraordinary bravery, agility, obedience, and the ability to quite literally think and react and perform evasive maneuvers with spontaneity and precision. The fancy footwork of dressage horses or barrel racers amounts to child’s play compared to the side stepping, spinning, prancing, galloping, and posturing Pablo’s horses are capable of. 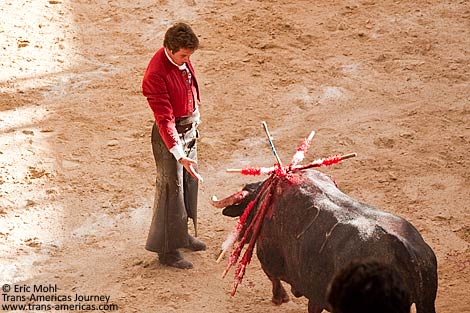 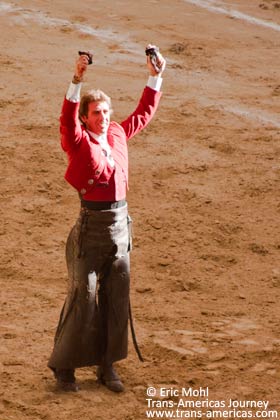 Every bullfight is judged and matadors and rejoneadores are awarded one ear, two ears, or two ears and a tail (or none of the above) depending on the caliber of their performance. Here, Pablo shows off his two ears.

The scrolling slideshow of four images, below, shows one of Pablo’s early passes with his second and final bull of the day. The determination of his horse is amazing. 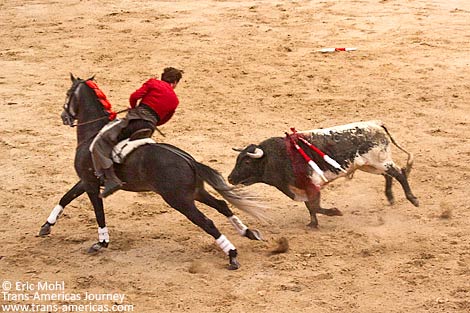 World class rojeneador horses, like the ones in Pablo Hermoso de Mendoza’s private stables, are able to move in ways most horses can’t.

This seven-image scrolling slideshow, below, illustrates one of Pablo’s later passes at his second and final bull of the day. He’s riding a different horse here–note how it gallops fearlessly straight for the bull then deftly sidesteps to the left… 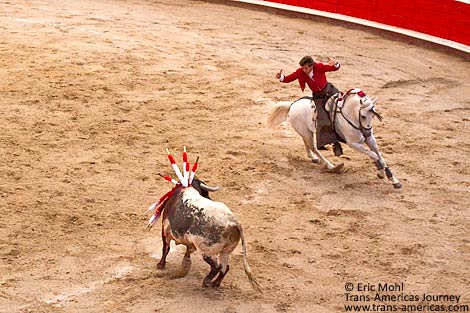 Rejoneadores like Pablo Hermoso de Mendoza spend a lot of time riding with no hands. 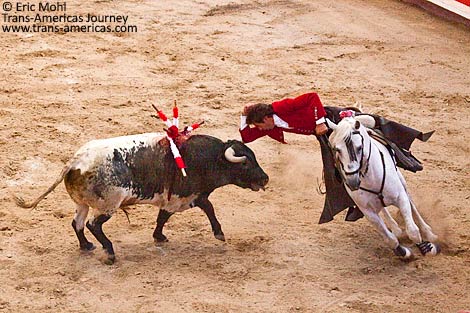 This scrolling slideshow, below, contains two images that demonstrate Pablo’s last fatal pass at his second and final bull of the day. 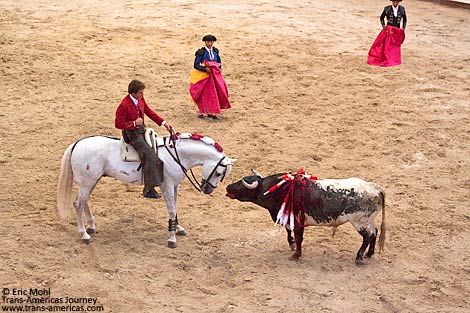 Horses used by rejoneadores like Pablo Hermoso de Mendoza are exquisitely trained and flawlessly brave. The smudges on the hair on this horse’s flank and belly came from direct contact with the bull’s horns during the pass shown in the scrolling slideshow above this photo. 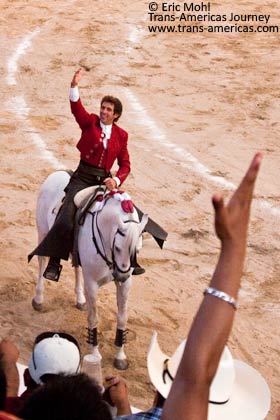 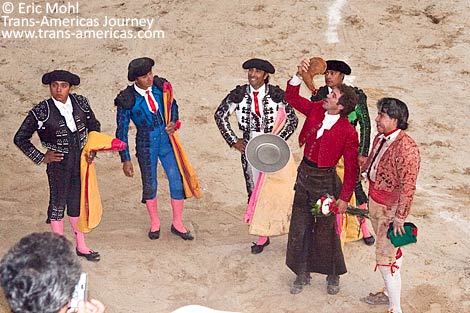 Fans toss bota bags full of booze down to their favorite bull fighters as they take their leisurely post-fight victory laps. Here Pablo drinks as the crowd chants. The man to Pablo’s left is the forcado who got trampled earlier in the day, as shown in the scrolling slideshow near the top of this post.