The experts tell us that the Mayan city of Palenque, which was inhabited from 100-800 AD with a peak around the 7th century, is smaller than, say, Tikal in Guatemala, but it sure feels big and archaeologists never stop digging up new treasures. 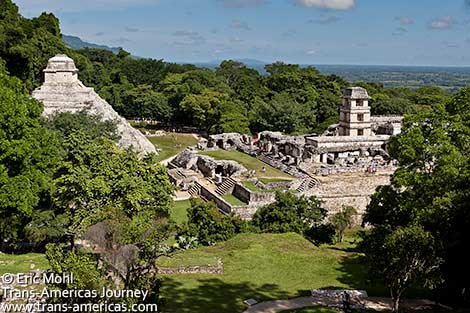 Overview of the main plaza at Palenque archaeological site in Chiapas, Mexico.

The structures at Palenque, which was designated a UNESCO World Heritage site in 1987, are hulking and the area that’s open to the public (a fraction of the six square miles or 15 square km the city is believed to have covered) is full of nicely groomed trails which take you through the city’s “suburbs” so you can see where some of the people lived beyond the temples and main plazas and royal areas. 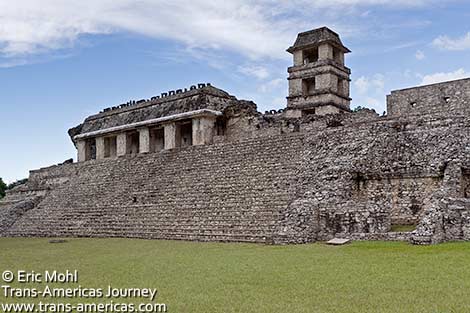 When Palenque was flourishing it was a major political and creative powerhouse. We know this because the site has been extensively studied for years. Elaborate frescoes and glyphs have been discovered here, demonstrating superb artistic technique and many works also tell the story of the city’s dominating and visionary rulers and their considerable accomplishments.

The discovery of the tomb of Pakal, perhaps Palenque’s most venerated leader, in 1952 by Mexican archaeologist Alberto Ruz Lhuillier was a major find at the site. Ruz Lhuillier himself is buried at Palenque under the trees in front of Templo XIII. 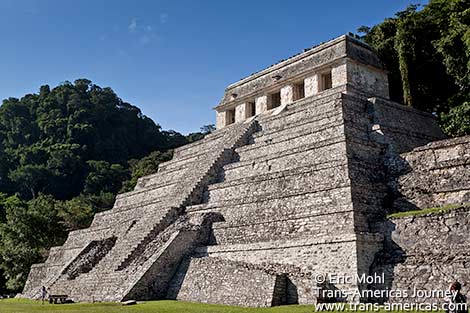 Pakal, one of the most revered leaders of Palenque, was buried in an elaborate tomb under the Temple of the Inscriptions. 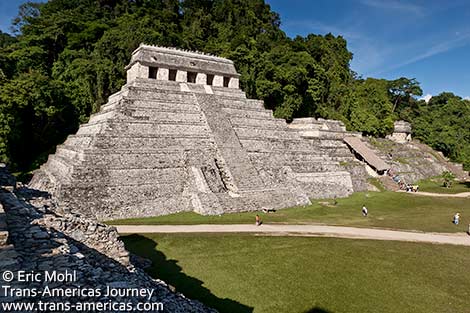 The Temple of the Inscriptions with Temple XIII to its right. This is where the tomb of the so-called Reina Roja was unearthed in 1994.

And they keep finding new treasures at Palenque. In 1994 archaeologist Arnoldo Gonzales discovered the tomb of a woman underneath the already-explored Temple XIII. The last resting place of the Reina Roja (Red Queen), so-called because she is believed to have been a dignitary and because her body was dyed red from the cinnabar used during her burial, is now a major attraction. The sarcophagus is still at the site and it is, indeed, very red. 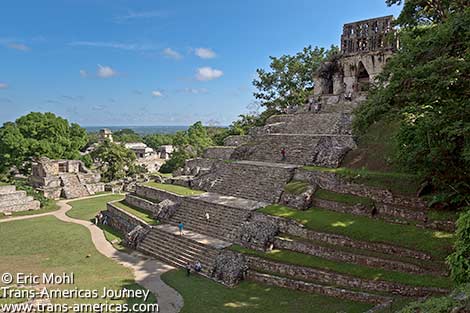 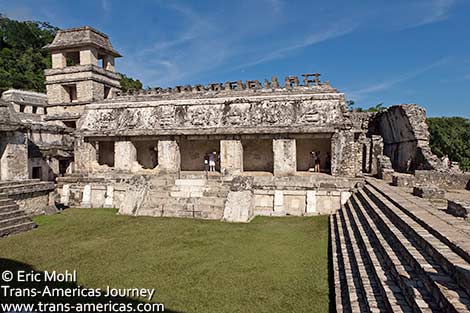 Patio of the Captives in the El Palacio structure at Palenque. 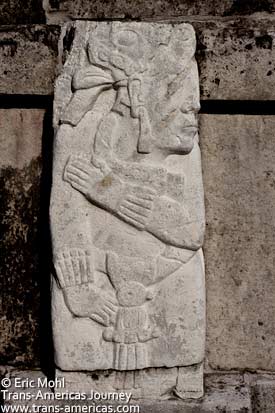 Relief of a captive at the Patio of the Captives at Palenque. 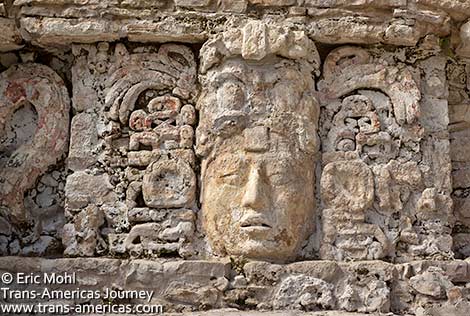 Masks still stare out from the El Palacio structure at Palenque.

In 2010 archaeologists also discovered the only known pressurized aqueduct system in the Mayan world at Palenque. 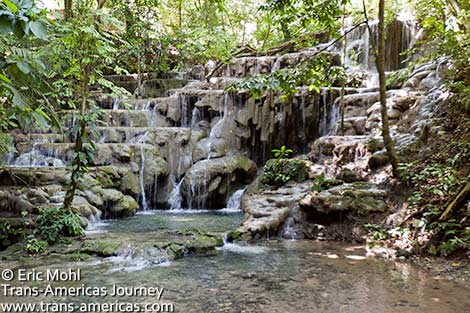 Part of the charm of the Palenque archaeological site is its park-like setting, including a beautiful stream and waterfalls like this one called Baño de la Reina.

So, there’s a lot to see and plenty of fascinating structures and design elements and nooks and crannies to explore (though you can’t climb much anymore) at Palenque and the site retains a sense that it still has plenty of secrets up its sleeve. It’s intoxicating and we spent more than three hours at the site, not counting time spent in the adjacent (free) museum.

In the museum you can see a replica of Pakal’s tomb (the original is not open to the public) with its intricately carved sarcophagus. The museum also has a large collection of pottery, incense burners, and plenty of English on their signage. 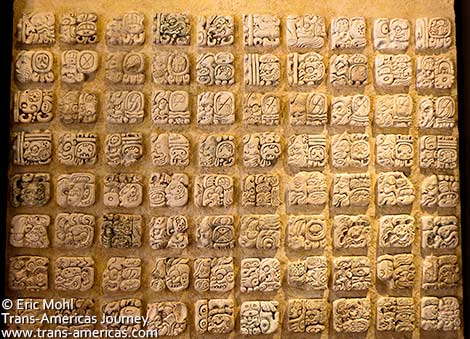 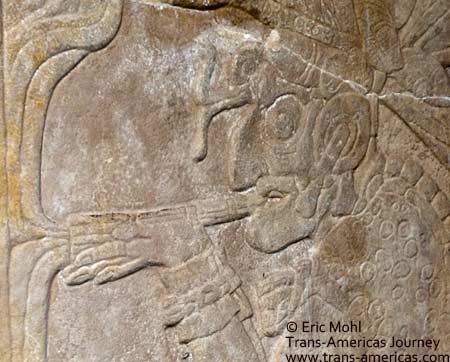 This carving at Palenque, which we like to call “Old Smokin’ Dude,” is unusual in its depiction of old age and of smoking.

Our video, below, delivers a view of the main plaza at Palenque, including the Temple of the Inscriptions, as shot from the El Palacio structure.

The modern town of Palenque, about a 10-minute drive from the site, is really nothing to write home about (hot, dusty, noisy)  but Palenque now has a bona fide boutique hotel halfway between town and the site. It’s called Boutique Hotel Quinta Chanabnal and it’s run by Italian Mayanist Raphael Tunesi and his Mexican wife (whom he met at Palenque). 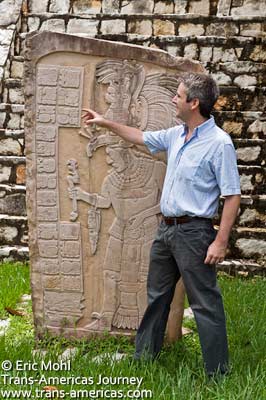 Raphael Tunesi, Mayanist and hotel owner, on the grounds of his Boutique Hotel Quinta Chanabnal near the entrance to the Palenque archaeological site.

The hotel, which Raphael built using modern interpretations of Mayan construction methods and designs, has seven huge rooms and a lovely pool. The dining room, where you can enjoy traditional Mayan dishes (like snail and chaya soup) if you ask in advance, is decorated with modern versions of Mayan carvings depicting milestones in Raphael’s life (the birth of his daughter, the building of the hotel, etc).  For more, read our full report about Quinta Chanabnal for iTraveliShop.

And be aware: Palenque is a rock star and it draws rock star crowds. We parked at 8:45 am and the lot was already swarming with tour buses and it just got more crowded as the day wore on. The ticket booth employees were dealing off a stack of tickets that was at least a foot and a half tall. Also, there are a lot of vendors selling cheap tourist crap set up right in the main plaza of the site which breaks the spell a bit.

We also wonder why Palenque is a National Park with its own separate fee of 25 pesos per person (about US$2.50). There is no apparent ecological protection or national park-like infrastructure in the area, just a gate with a guy who has an excuse to charge an entrance fee.