While not exactly untouched, Isla Boca Brava and Playa Las Lajas are not nearly as visited as Panama’s more well-known beach destinations like the islands in the Bocas del Toro Archipelago and that’s part of the charm of traveling to the western islands and beaches of Panama. 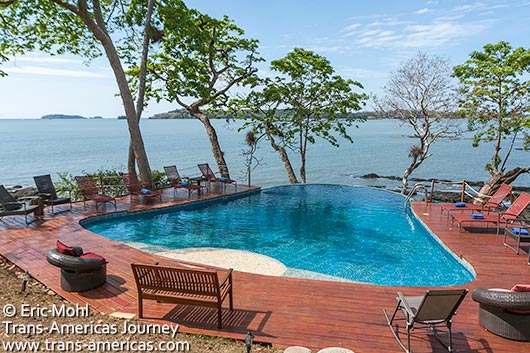 A plunge pool with a view at Cala Mia Pacific Hotel on Isla Boca Brava in northern Panama.

To get to the 30 square mile (77 square km) island of Boca Brava you have to first get to the fishing village of Boca Chica. After leaving our truck under an avocado tree on the property of a family that’s decided to use part of their land as an informal parking service, we got into a water taxi for the 10-minute ride to Cala Mia Island Resort for a dose of secluded romance.

Cala Mia’s 11 thatch-roof accommodations, private horseshoe bay beach, and cliffside location make you feel like you’ve got the island to yourself. Rooms have all the mod cons including A/C and private patios with ocean views, especially nice from August through November when humpback whales migrate through. 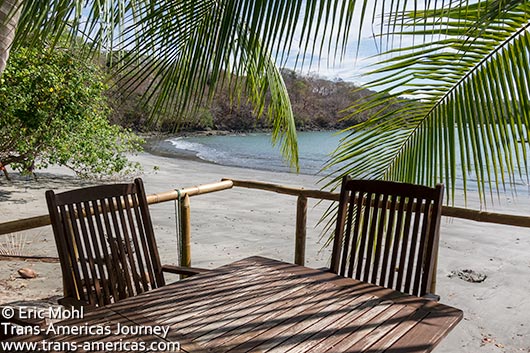 When we were at Cala Mia a new owner had just taken over and we believe there’s been a new owner since then. Hopefully one of them upgraded Cala Mia’s dramatic Spa Cielo which is accessed via a swinging bridge that connects the mainland of the island to a nearby rocky outcrop but needed some serious TLC.

On the other end of the accommodation spectrum (and the other end of the island) is Hotel Boca Brava with 17 rooms ranging from privates (around US$30 double) to dorms. The food in the open-air restaurant is almost as good as the view of the Pacific. Room #10 was our favorite with curved walls, a small private patio with chairs, and a water view. Water can be scarce on the island in the dry season and the hotel’s gregarious owner, Brad, keeps occupancy to just half in order to make sure everyone has enough water. Still, conserve as much as you can. 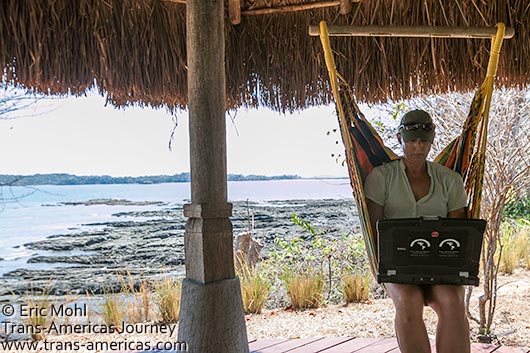 Karen’s office of the day on the patio of our room at Cala Mia Island Resort on Isla Boca Brava in Panama, though we still don’t fully understand why hammock seats exist…

What to do around Boca Brava

Boca Brava, and more than 20 other islands, are all protected within the Gulf of Chiriqui National Marine Park, so it’s not surprising that most of the things to do around Boca Brava involve getting wet.

As we already mentioned, August through November is whale watching season in northern Panama with migrating humpbacks crowding the water and plenty of tour companies waiting to take you out to see them. Isla Ladrones, 27 miles (43 km) from Boca Brava, is a SCUBA diving hot spot all year round with the chance to see sharks, rays, and more. Our plans to dive around Ladrones were thwarted, however, by bad weather which created rough conditions and very limited visibility in the water so our trip was cancelled. The deep-sea fishing is said to be terrific around Boca Brava as well, if you’re into that kind of thing. 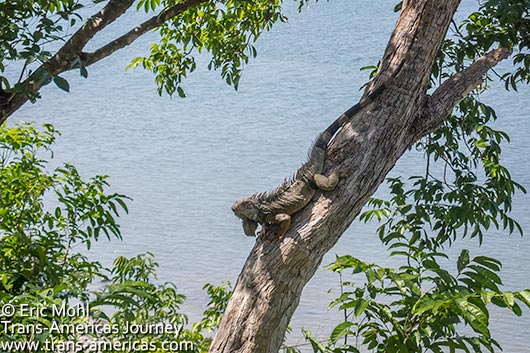 Playa Las Lajas is most famous for its 12 mile (20 km) long stretch of beach. You can walk for ages and you’re likely to have the place to yourself except on weekends. Just don’t have your heart set on a funky beach bar or awesome seaside seafood shack. Playa Las Lajas was eerily free of any sort of service like that. 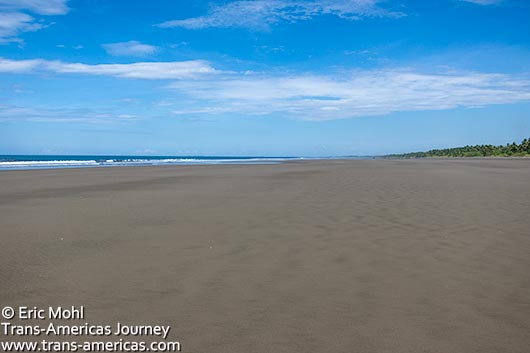 Playa Las Lajas is 12 miles (20 km) long and at low tide this beach is incredibly wide as well.

If you ask us, the town of Las Lajas, inland from the beach, should also be equally famous for its flamboyant, sculpture-filled bus stops, each depicting a different marine scene. You almost hope the bus never comes. 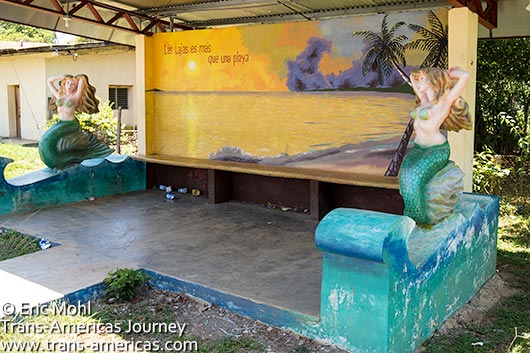 This is a bus stop, Las Lajas style. 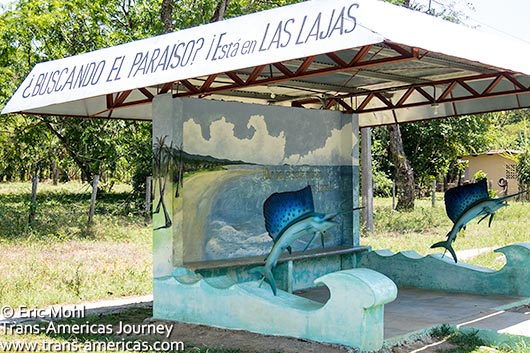 Naturalmente Boutique Bungalows, opened in Las Lajas in 2013, is not on the beach but it’s close enough and you can’t beat it for its style bungalows and small pool. The real reason to visit Naturalmente, however, is the open-air restaurant where owners Chantal and Gabriel, both from Modena, let their Italian roots show with pizzas (baked in an oven imported from Italy), great pasta dishes, homemade bread, and homemade Italian sausage. 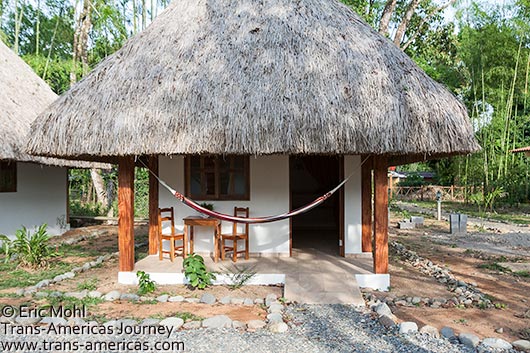 If you’re making the very long haul on the Pan-American Highway between Panama City and David, Boquete, Cerro Punta or the order with Costa Rica at Paso Canoas or Sixaola, Playa Las Lajas makes a great place to break your journey.

Geographical note about the screwy compass in Panama

Countries in Central and South America unfurl in a tidy north-to-south trajectory except for Panama which takes a sharp turn and ends up sitting perpendicular to its neighbors. This means that, in Panama, “north” refers to the long Atlantic/Caribbean coast and “south” indicates the long Pacific coast of the country. If you want to talk about the end of the country nearest the city of David and the border with Costa Rica, as we do within this post, you’re really talking about the west end of the country. 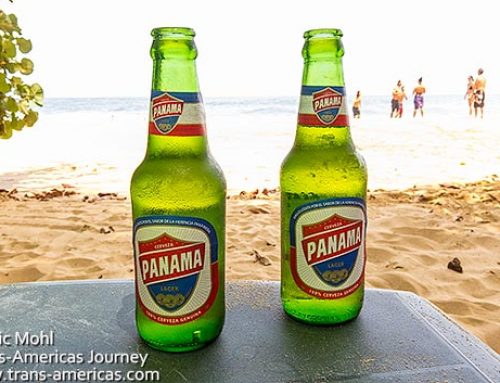 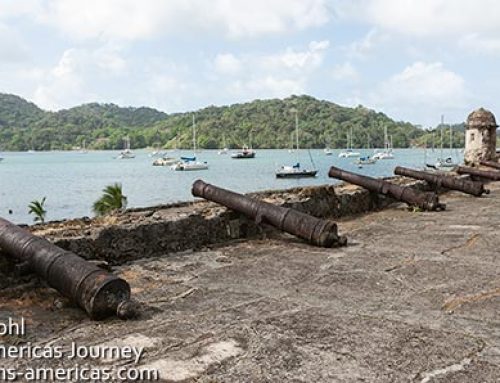 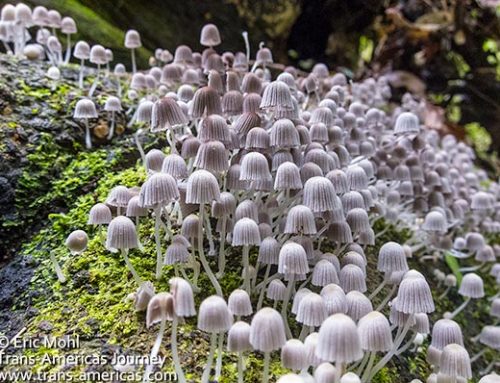 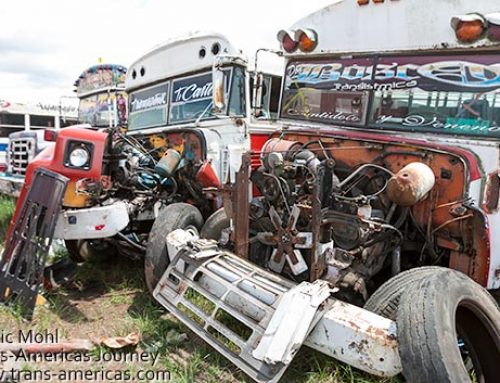