Over the Border – El Paso to Casa Grandes, Mexico

We’ve done it plenty of times but every time we go over a border we still feel a twinge of uneasiness. The sense of being in a no-man’s land where the rules are not your own and come in a language you struggle to understand (yes, our Spanish still sucks) is bound is to create some tension but all went smoothly as we crossed from El Paso on our way to Casas Grandes, Mexico. 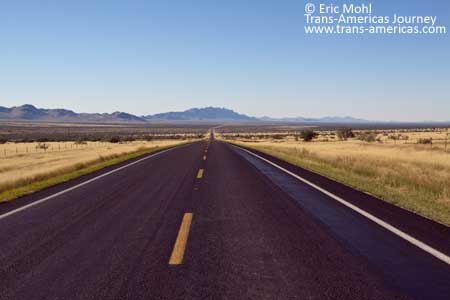 Taking the road south from El Paso and back into Mexico.

Before re-entering Mexico this time we picked up Dave Hensleigh from Authentic Copper Canyon. Every month or so Dave runs custom tours of the Copper Canyon that get well below the surface. He’s been back and forth across the border more than most.

With an expert like Dave on hand we asked him which of the three crossing points from El Paso into Mexico we should choose and without hesitation he suggested the Santa Theresa crossing. This small entry point was practically deserted, easy to navigate and relatively hassle-free except for the curious border agents who were momentarily convinced that we must be moving to Mexico since we’ve got so much stuff in our truck. An understandable assumption, by the way.

Once that was cleared up we traveled south toward Janos, enveloped in an ever-thickening sense of Mexican well-being. Things were suddenly somehow simpler. Not easier, mind you, but certainly less complicated than they’d been just a dozen miles further north. 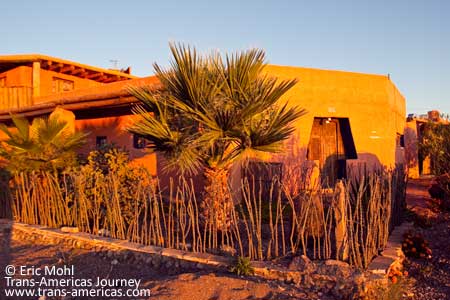 By dusk we’d arrived at Las Guacamayas bed and breakfast in the town of Casas Grandes. Even in the descending dark it was clear that we were in a special place. Owner Mayte Lujan built the B&B essentially by hand mimicking many of the construction techniques used by the original inhabitants of the ancient town of Paquimé, the ruins of which can be seen from the deck of her bed and breakfast (more about the ruins in a minute).

The building techniques Mayte used include three foot thick adobe walls, ceilings that are a masterwork of wooden beams and angled planks, and doors in a crude Christmas tree shape. Then there was Mayte herself who bustled and hustled and jostled her way among staffers and guests in the dining room, serving up carne asada tacos and smiles. We were hooked. 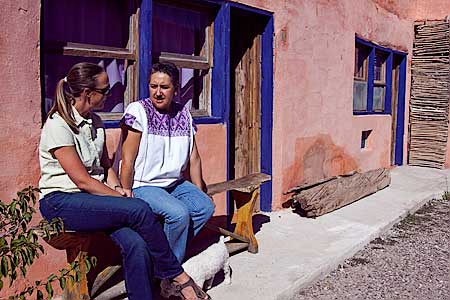 In addition to being a groundbreaking builder and an excellent host, Mayte is also an extremely passionate and influential force in local cultural and artistic history. Despite her lack of a formal anthropological degree Mayte curated the neighboring Centro Cultural Paquimé: Museo de los Culturas del Norte & Paquimé  Ruins which was designated a UNESCO World Heritage site in 1998. She also actively advocates for and promotes the growing number of local artists who have revived the Paquimé style of pottery (more on that in a minute too).

A beautiful gallery at her B&B  displays and sells some of the best work being done in the area and Mayte was also part of an exhibit of this style of pottery at the Smithsonian in Washington DC. 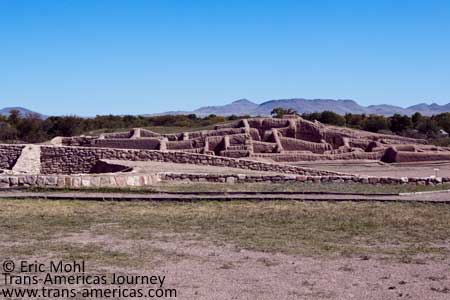 Some of the impressive ruins of the casas grandes (great houses) at Paquimé.

We spent the next morning at the Paquimé archaeological site and museum. The museum is compact and compelling and display descriptions are in Spanish and in English. The mass of ruins outside the museum offers hints at how the inhabitants of Paquimé lived from 900 AD to 1340 AD when the city was mysteriously abandoned.

You can clearly see remnants of the famously thick walls, the oddly-shaped doors, elaborate cisterns and irrigation canals, even clay cages meant to house macaws (guacamayas in Spanish) which were thought to bring good luck. 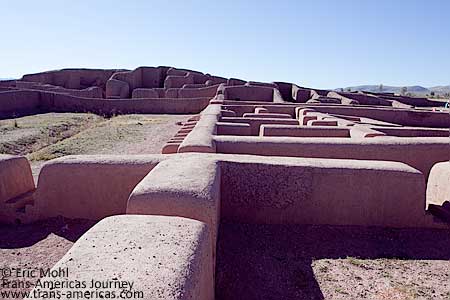 Two to three foot thick adobe mud walls are a signature method of construction used to build the ancient city of Paquimé. 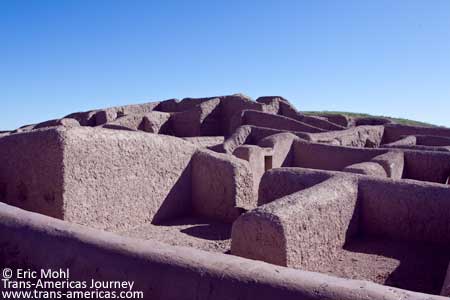 Two to three foot thick adobe mud walls are a signature method of construction used to build the ancient city of Paquimé.

Meeting the king of Paquimé pottery

A short drive brought us to the dusty village of Mata Ortiz where everyone seems to be a potter. The king, according to many, is Juan Quezada who is largely credited with mastering and reviving the Paquimé style of pottery after the art form had been dead for 700 years. Mayte estimates that about 1,000 noteworthy artists are now working in this style of pottery–marked by rich dark colors, symmetrical shapes (despite the fact that they’re all made by hand not on a wheel), and a slight sheen. 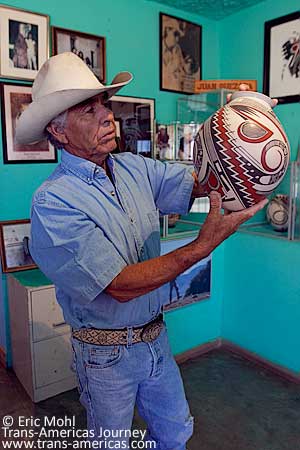 Juan Quezada is believed by many to have single-handedly revived an ancient method of pottery making.

We got to meet Juan Quezada himself while we were at his gallery, which is bursting with hundreds of pieces in all shapes and sizes made by Juan and members of his family. Laura Bush recently bought one of Juan Quezada’s pieces and the dashing artist swears he didn’t give her a special price.

After a delicious lunch of shrimp tacos at Tacos Il Piporro in nearby Nuevo Casas Grandes we headed to Chihuahua city and the Hotel San Felipe el Real. 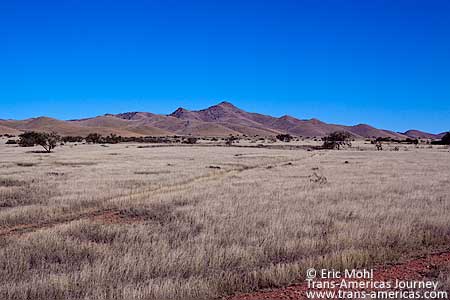 The Chihuahuan Desert was more lush than usual following a summer of  heavy rains.