The massive Reserva Nacional de Paracas (Paracas National Reserve in English) protects a stunning collection of coastal dunes, scenic bays, inviting beaches, and more near the town of Paracas. It’s such a stunning and memorable place that parts of the movie Don’t Look Up were filmed here. Even if you don’t bump into movie stars, there’s plenty to see. Here’s how to explore the Paracas National Reserve including a delicious tip for lunch.

Coastal desert landscapes and colors are a hallmark of the Paracas National Reserve in Peru.

The Paracas National Reserve, established in 1975, protects the marine-coastal ecosystem of the Paracas Peninsula and a huge expanse of ocean surrounding it. It’s essentially a marine reserve since 65% of the 827,800 acres (335,000 hectares) it protects are underwater.

The area’s harsh terrain of sandy dunes and desert landscapes is home to an estimated 216 species of birds, 36 species of mammals (including sea lions galore), and 10 types of reptiles with an estimated 168 species of fish in the surrounding sea. 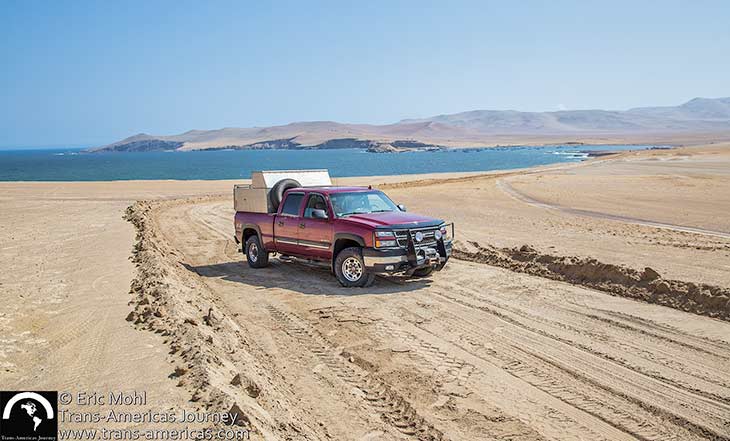 Our truck on a sand road in the Paracas National Reserve.

We were told that Andean condors are sometimes seen on the beaches within the reserve whenever the carcass of something attracts them down from their usual lofty realm. That’s a rare sight. Unfortunately, we did not see any beach condors when we were there. 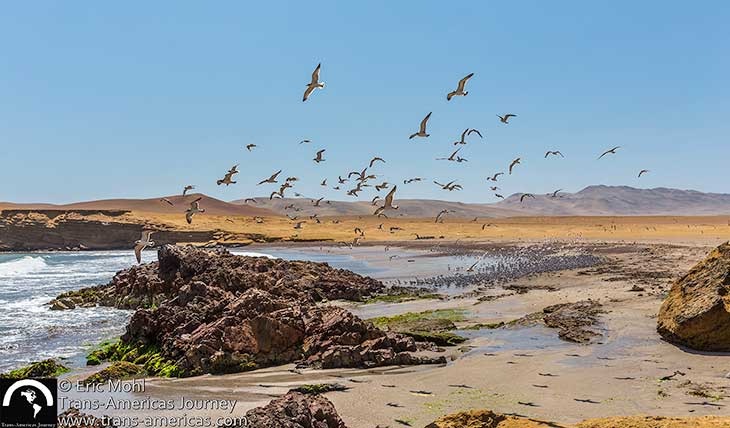 Sea birds and sea mammals are the animal stars of the show in the Paracas National Reserve.

After entering the reserve (11 soles or about US$2.75), we drove along a paved road to the reserve’s interpretation center. After perusing decent displays about the area’s flora, fauna, and geography (with descriptions in English and Spanish), we took a short path from the center to the waterfront through the La Aguada wetland (one of the few areas in the reserve where plants and trees survive). 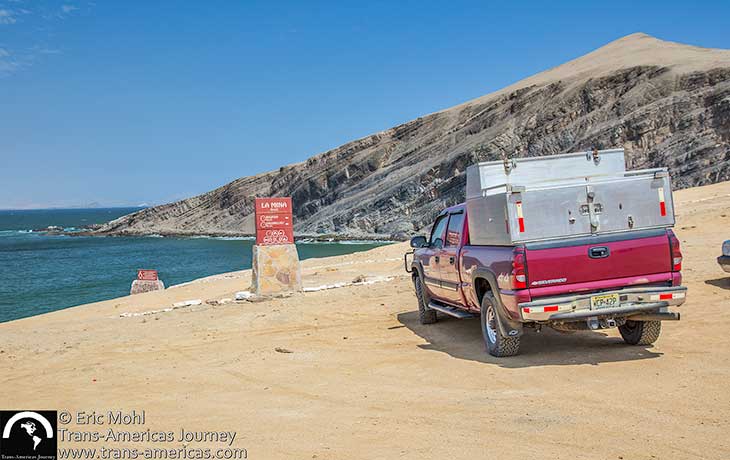 Our truck in the parking area for lovely La Mina Beach.

Peruvian flamingos are sometimes spotted there, but we didn’t see any of them near the interpretation center. However, we did see this species in other areas of the reserve. Next to the interpretation center, you’ll also find the History of Paracas museum which has a cultural and historic focus and educates visitors about the Paracas people and civilization.

Swimming and camping are possible at La Mina beach in the Paracas National Reserve.

Deeper into the reserve, the pavement ends and a sand road connects well-signed viewpoints and beaches. Note that one of the park’s star attractions, a rock formation called La Catedral (The Cathedral in English) is no more after an earthquake in 2007 destroyed it. 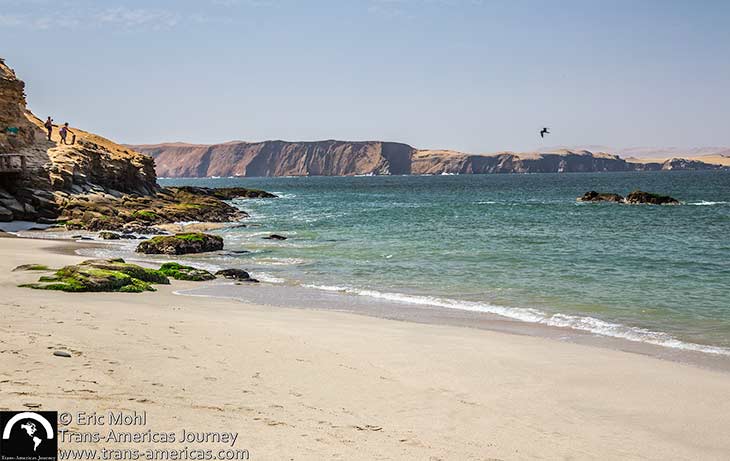 With so many bays and inlets in the Paracas National Reserve, it’s possible to find a calm and protected area for swimming.

The Paracas Peninsula is pitted with bays and lined with beaches that you can visit during your exploration of the reserve. Playa La Mina (La Mina Beach) is a particularly lovely arc of sand that’s easy to access via a short trail that takes you down from a parking area to the sand. The surf here is very mild as well so it’s a good place for swimming. There are vendors renting chairs and umbrellas and camping is allowed on this beach as well. 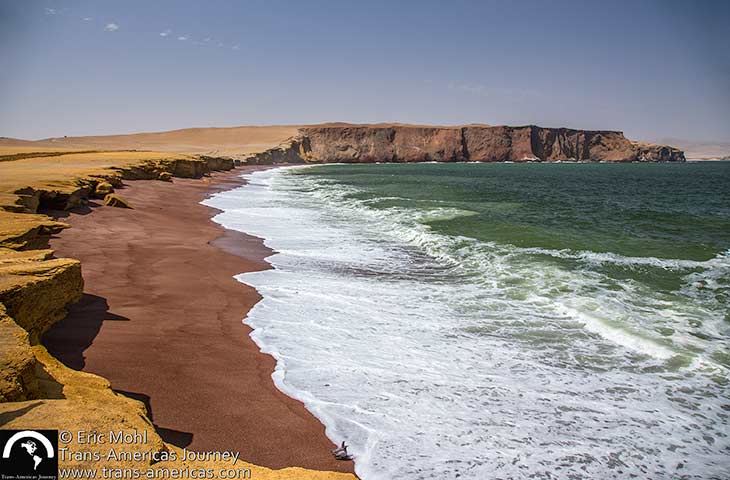 Playa Roja (Red Beach) lives up to its name with a sweeping expanse of naturally-colored sand.

Playa Roja features an arced pink sand beach (colored by pink granodiorite). The color of the sand makes a very dramatic contrast with the blue and green water. 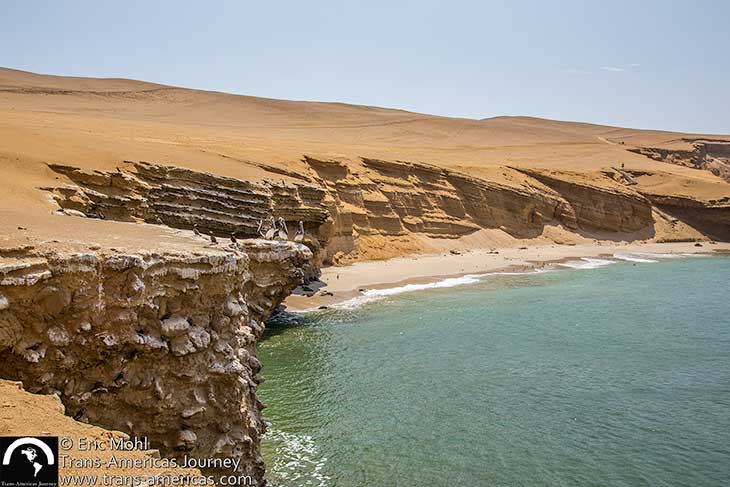 Coastal desert at its most dramatic.

There’s culture in the reserve as well because more than 100 archaeological sites from the Paracas culture are located within the reserve. 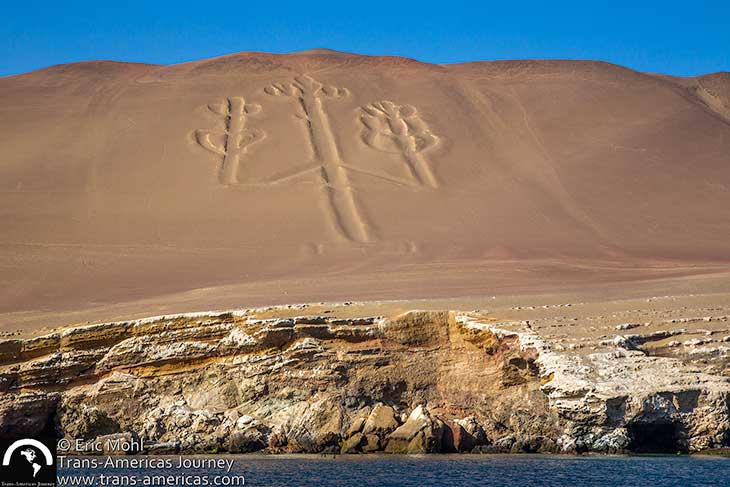 The El Candelabro geoglyph is one of more than 100 archaeological sites in the reserve.

One of the most striking archaeological elements of the reserve is the massive and mysterious El Candelabro geoglyph which we got a good look a during our tour of Islas Ballestas.

If you don’t have your own vehicle, there are many tour companies in the town of Paracas that provide transport through the reserve. You can also rent bicycles (including motorized bicycles) in nearby Paracas and use them to independently peddle your way around the reserve. 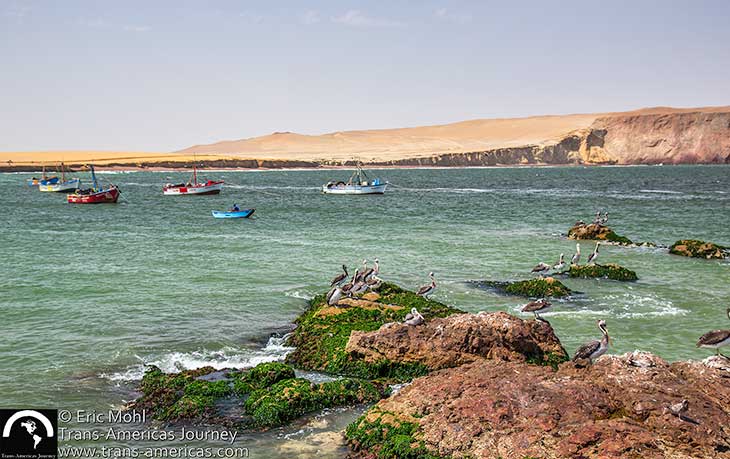 A small fishing fleet at work.

Try to enter the reserve by 8 am. Temperatures and winds (called paracas in the Quechua language) rise as the day progresses, so it’s cooler and calmer in the morning. 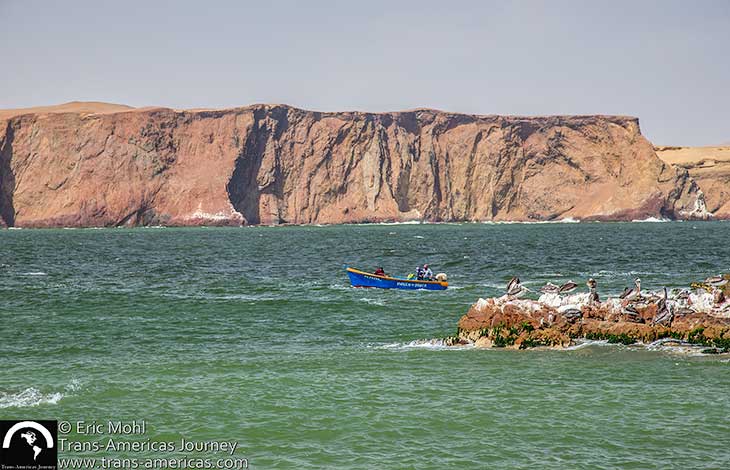 A fishing boat in the waters of the Paracas National Reserve.

We recommend stopping for lunch at a bustling open-air eatery called La Tia Pili (sometimes spelled Pily) as part of your exploration of the reserve. It’s located at the small fishing port in Playa Langunilla. There are four or five eateries there, all serving super fresh fish. However, La Tia Pili has the best waterfront location and view. Yes, you’re paying a bit more for the location and the service isn’t great, but our meal was tasty including a huge plate of perfectly fresh ceviche (33 soles or about US$8) and ice-cold beer (10 soles or about US$2.50 for a 1 liter bottle). 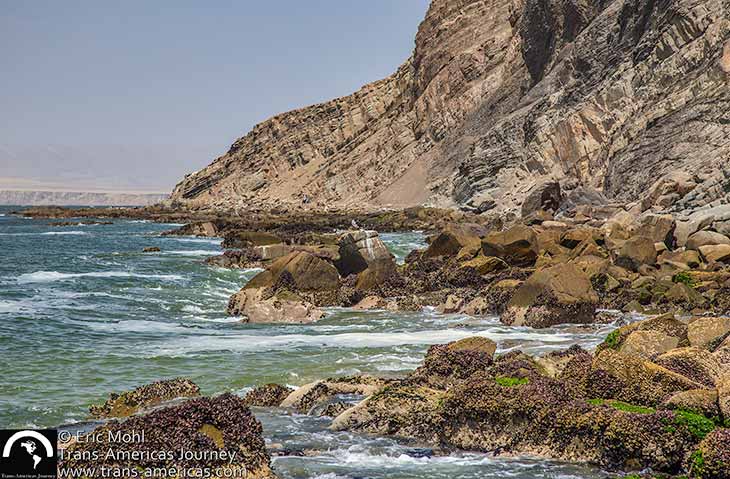 A rocky shoreline within the Paracas National Reserve.

Your base camp for the Paracas National Reserve is the town of Paracas. Use our Paracas Beach Town Travel Guide to plan your time there.