As if visiting archaeological sites wasn’t enough of an adventure, there are a handful, including Laguna Petexbatún and Aguateca in Guatemala, that are best accessed by boat which adds a thrill before you even get there. 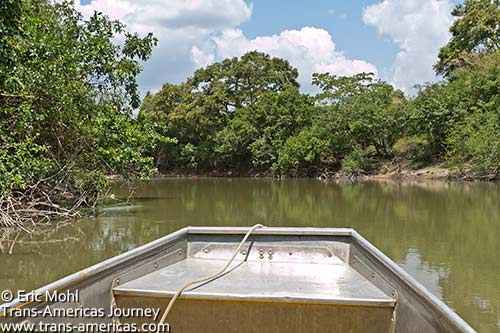 The Rio la Pasión is the only highway to the Aguateca Mayan archaeological site in the Peten region of Guatemala.

It’s got the word “agua” right in the name and, in some ways, the roughly two-hour boat ride that you have to take from the town of Sayaxche out to the Aguateca archaeological site was the best part of our visit to this once powerful Mayan city which dates back to 300 BC.

In Sayaxche we called a local boatman named Manuel (+ 502 59136012), then we piled into one of his small open-air boats and headed up the Rio la Pasión. The river eventually widened into what’s called Laguna Petexbatún. Surrounded by the Petexbatún Wildlife Refuge, the area is a favorite hang out for birds including herons, anhingas, cormorants, and osprey. Not to mention crocodiles and iguanas. 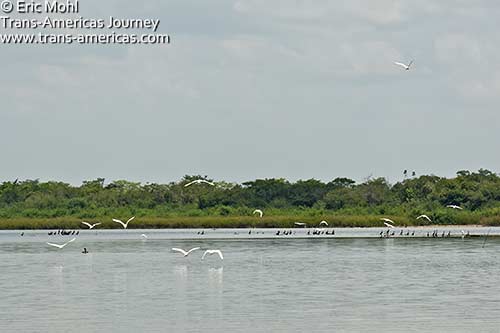 Birds on Laguna Petexbatún on our way to the Aguateca Mayan archaeological site in the Peten region of Guatemala.

When we reached the site our boatman parked and we sloshed up a sloping hillside to the entrance. The hillside has natural springs which make the slope muddy and slippery so wear proper walking shoes or even rubber boots for this one. 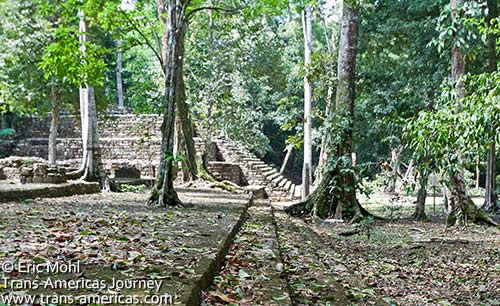 Aguateca Mayan archaeological site in the Peten region of Guatemala is best reached by boat.

Archaeologists didn’t even know that the remains of this city were here until 1957, but they’ve unearthed a lot since then. The site is also bisected by an unusual grieta, a natural chasm that’s up to 80 feet (24 meters) deep. As you explore the trails around this sprawling site you can cross the chasm over the same very cool natural bridge that the Mayans used. 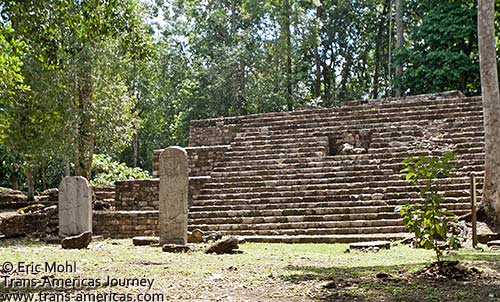 Aguateca Mayan archaeological site in the Peten region of Guatemala.

You can camp for free at Aguateca in a big, flat, grassy area but you must be self-sufficient and you’d have to negotiate for your boatman to stay with you to ensure you have a ride back to Sayaxche. 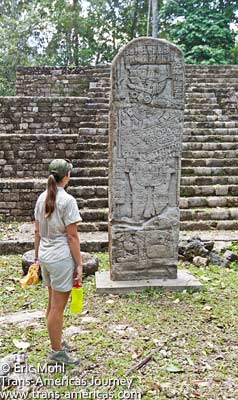 Karen admiring the remarkably crisp carving on this stone stele at the Agauteca site.

The Mayans who lived at Aguateca became powerful local rulers and they probably thought their watery location and hilltop perch afforded them some defense from their enemies. But it wasn’t enough. Archaeologists believe that an invading force ultimately breached Aguateca around 800 AD forcing the royal class to flee to nearby Punta de Chimino where they, again, relied on water to protect themselves. 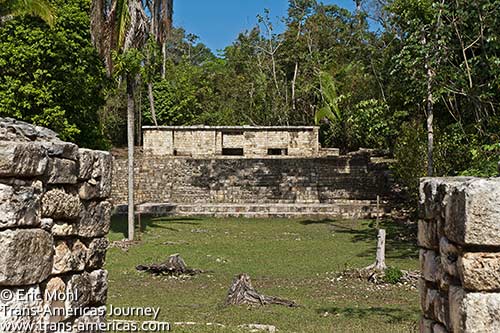 Archaeologists believe that this palace was abandoned by the royal class as they made their escape from Aguateca around 800 AD. 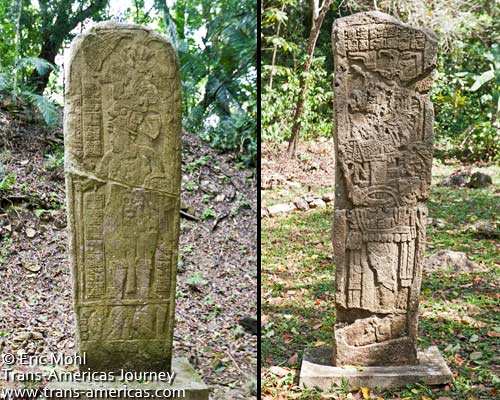 These partially re-constructed stone stele at the Aguateca site retain a lot of their original carving.

When the royal class abandoned the besieged city of Aguateca they headed for Punto de Chiminos, a spit of land just a few kilometers away. Once there, they started digging. Well, the royals probably didn’t start digging, but their servants sure did, ultimately cutting an impressive and enormous trench through dirt and rock to cut off the tip of the spit, creating a small island which they hoped would protect them from their enemies. 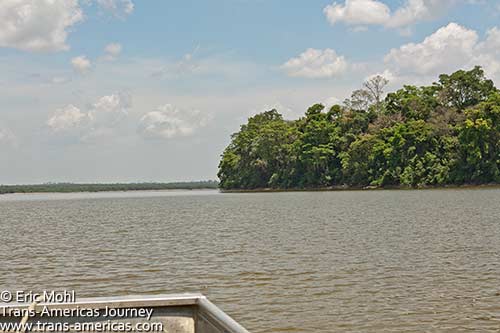 Mayans desperate to protect themselves from invaders are believed to have dug an enormous trench through earth and rock to turn the tip of Punto de Chiminos, above, into a man-made island.

Today there’s a small lodge on Punto de Chiminos. The Chimino’s Island Luxury Eco Lodge has five stand-alone bungalows built among what remains of the city that the fleeing royals built before they were ultimately overtaken.

Situated around the periphery of the island, the huge wooden rooms all have multiple beds, private bathrooms, big porches, and generator electricity until 10 pm. There are also hard wood floors and lovely stone showers. Each bungalow also has a thatch roof with a screened “false ceiling” built under the thatch to keep grit and critters from falling into the room. Smart. 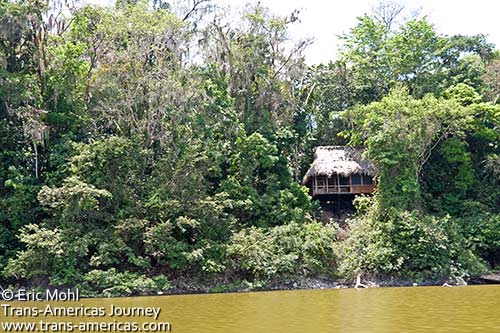 Our room at Chimino’s Island Lodge where a violent wind and rain storm made us feel like we were about to be blown into the lagoon or smashed by a falling tree.

At the lodge you also get what amounts to your own private archaeological site to wander through. What the fleeing royals from Aguateca left behind has not been excavated but building mounds and even the ball court are obvious as you stroll around the lodge. You can also peer into the impressive gash in the land that the Mayans made to create the island way back when. Just be sure you’ve used good insect repellent before leaving your room. The mosquitoes love it here too.

Batten down the hatches

After wandering around the island we returned to our room to watch the birds on Laguna Petexbatún below us, listen to the howler monkeys in the jungle all around us, and take a nap. At dusk the wind picked up a little bit and we woke up thrilled. A breeze! Cooler temperatures! Fewer mosquitoes!

But the wind kept going until birds, beasts, and trees were being blown sideways. Soon the rain came and the wind intensified even more. Whitecaps appeared on the lagoon. Over the next two hours the storm blew out our screens and ripped off sections of our thatch roof. With rain pouring into our room we stashed our belongings in the driest corner we could find and piled spare blankets on top of our bed to try and keep the mattress and base bedding dry.

Just as we were beginning to get concerned about a tree falling on our room (we’d actually put our shoes on and packed our things, ready for a quick getaway), the dramatic storm passed. 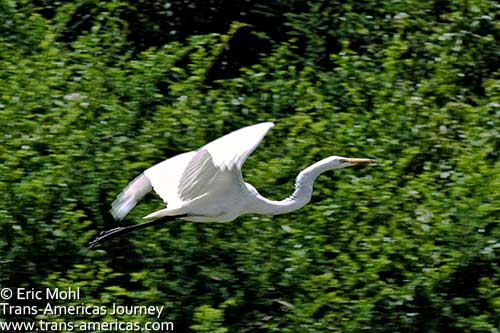 A heron that survived the previous night’s violent storm heads out to find breakfast on Lagauan Petexbatún in Guatemala.