We were struck by the quantity and quality of the street art in La Paz, Bolivia where the country’s rich living culture and diverse nature and wildlife inspire local artists. Eric captured some of his favorite examples of the art we saw during our many weeks in the city for this photo essay. We’re sure there’s new work out there now (part of the appeal of street art is its transient nature), so we hope travelers will explore the streets to find their own favorites. And if you’re into street art, also take a look at our photo essay about the unusual street art murals in the Central Cemetery in La Paz. 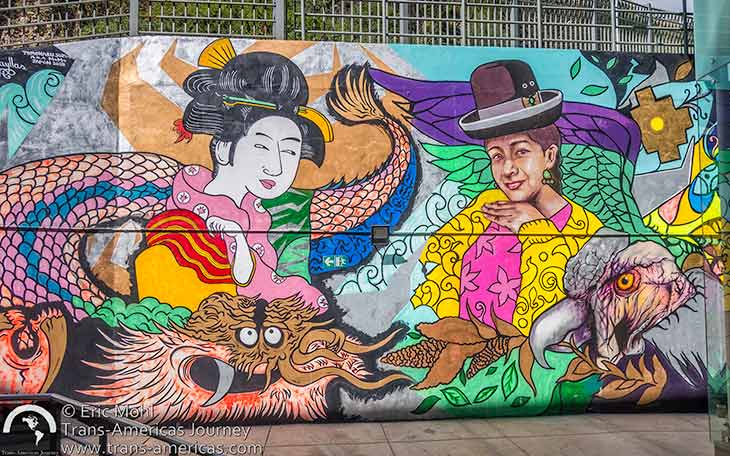 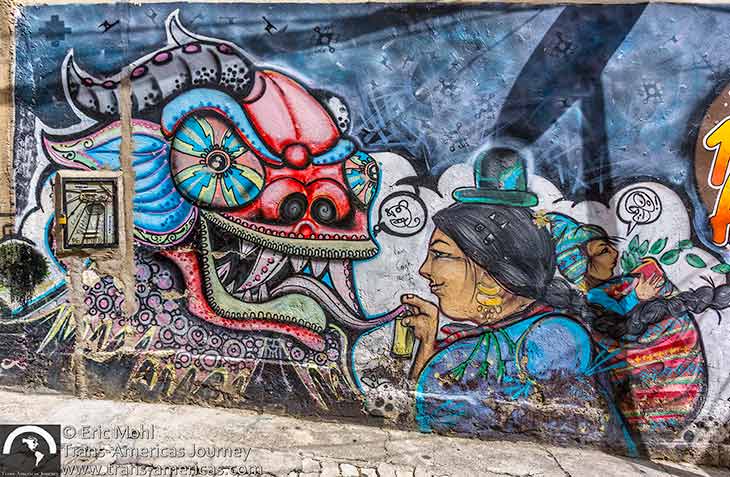 An Aymara cholita creating a traditional diablada (little devil) mask, which is a symbol that plays a big role in costumes worn during annual festivals, while the baby on her back seems to distribute coca leaves. 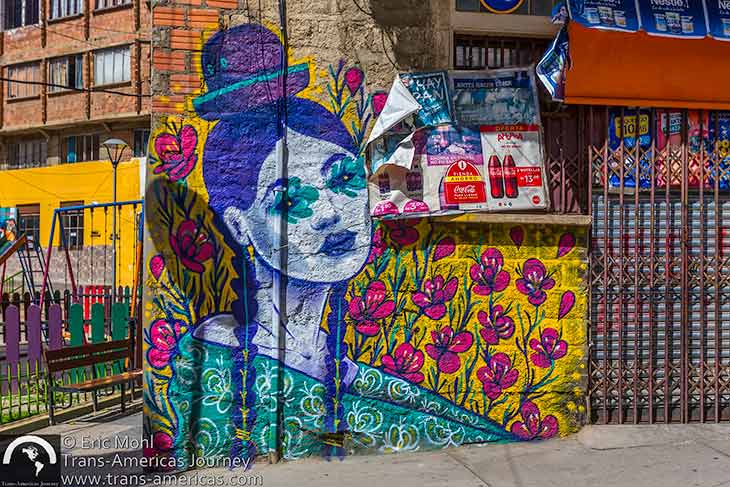 A modern, graphic representation of an Aymara cholita. 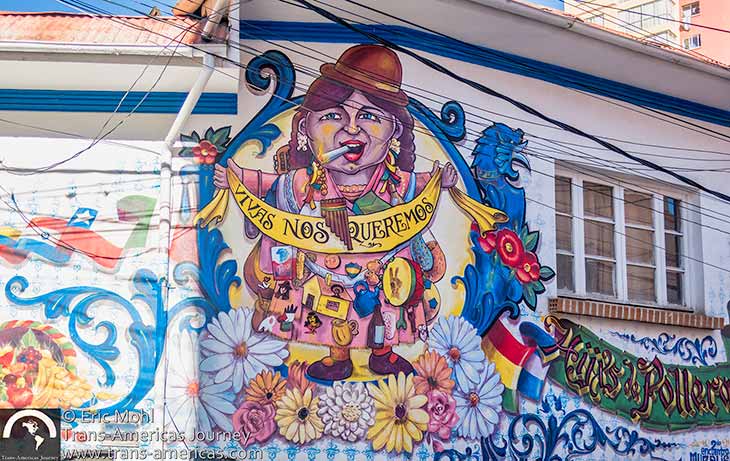 A cholita holding a banner that says We want to Live in a garment adorned with miniatures of desired items. 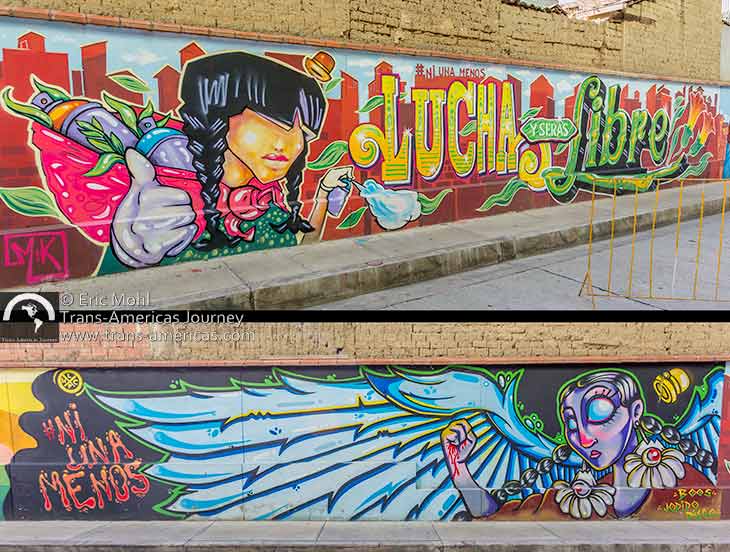 A modern cholita uses spray paint cans to put the finishing touches on a slogan that means Fight and You Will Be Free. The work shown on the bottom includes the words Ni Una Menos (Not One More) which is a slogan used in the fight to eliminate violence against women. 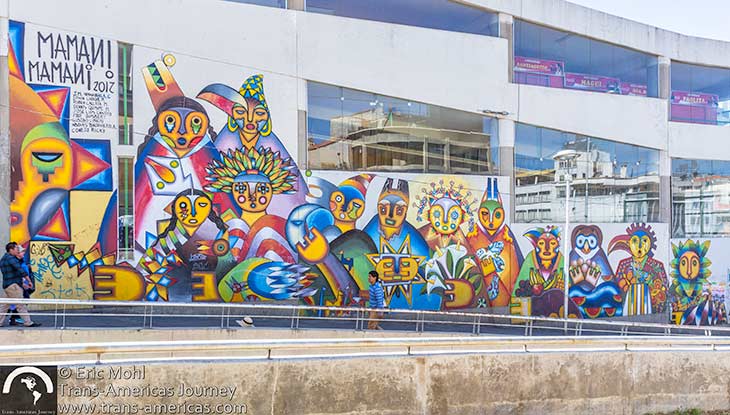 This large piece was done by Roberto Mamani Mamani, one of Bolivia’s most famous artists. 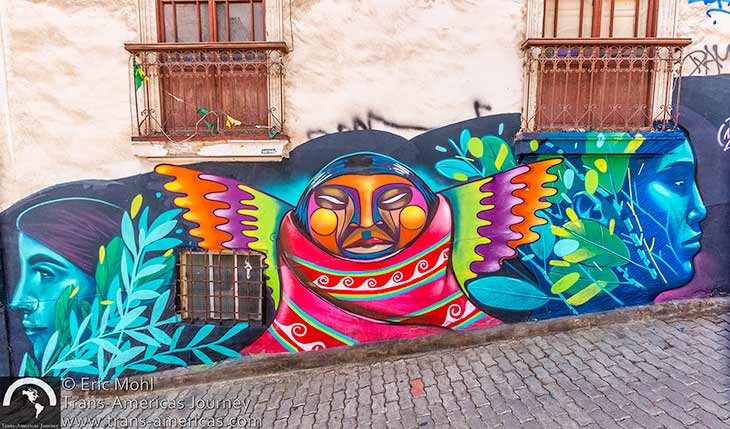 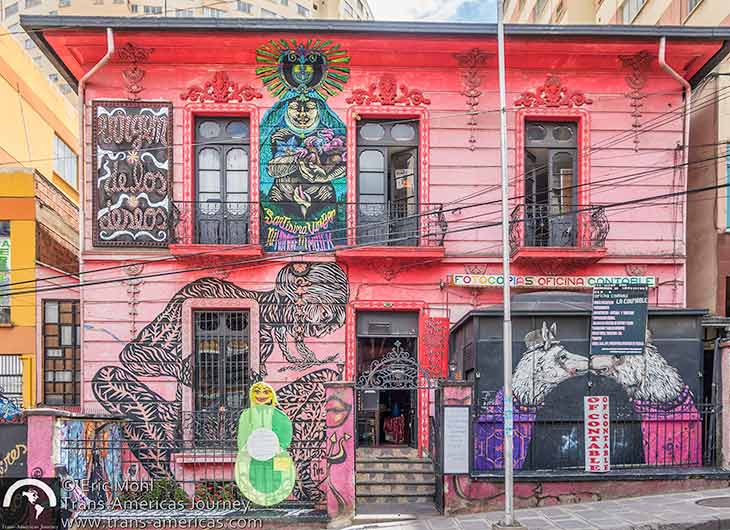 The facade of a building that calls itself Lugar de los Deseao (The Place of Desires). 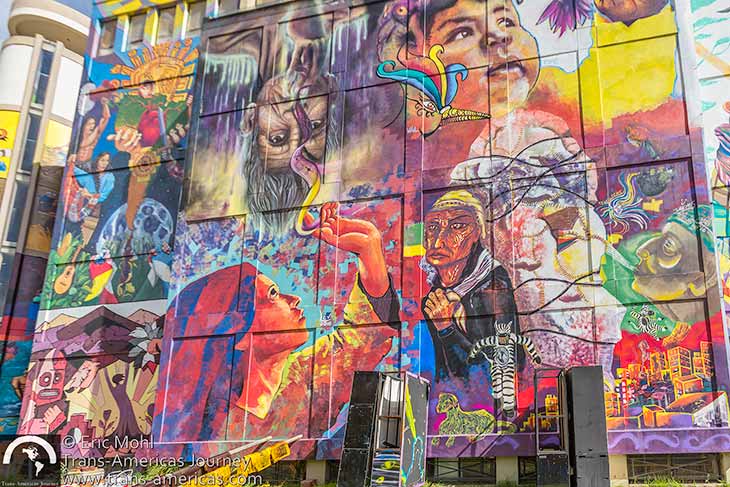 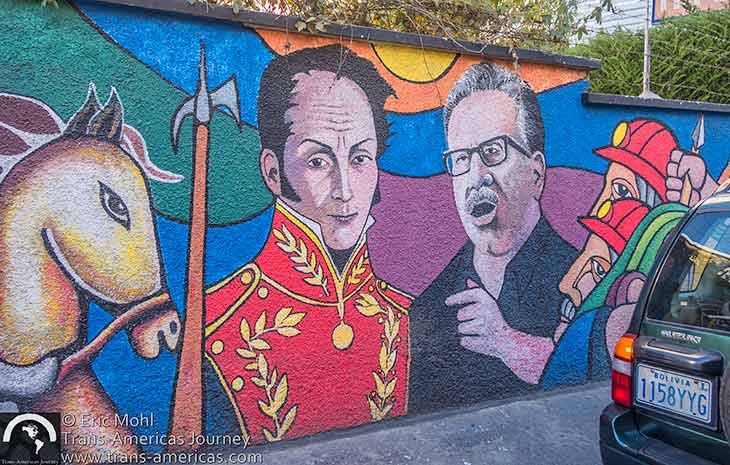 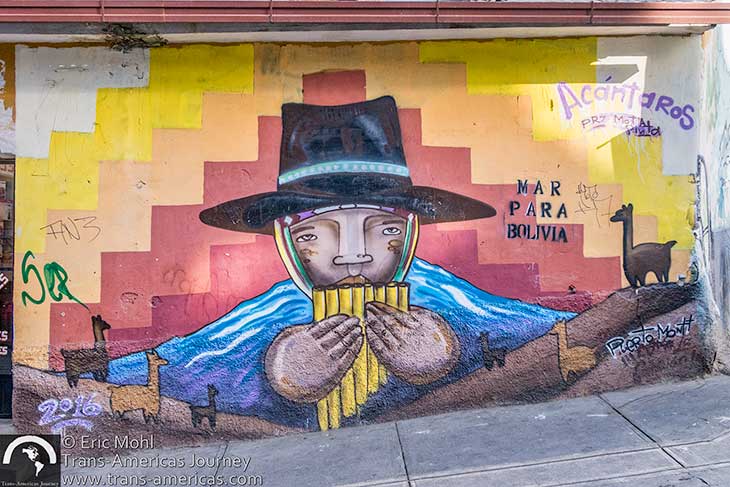 Look on the right side of this depiction of a man playing a pan flute and you’ll see that someone has tagged the work with the words “Mar para Bolivia”. This phrase (and variations) can be seen painted and written all over Bolivia in reference to the government’s belief that Chile should reinstate access to the sea (mar in Spanish) that was lost during the War of the Pacific more than a century ago. Bolivia also maintains a navy despite the fact that it remains a landlocked country. 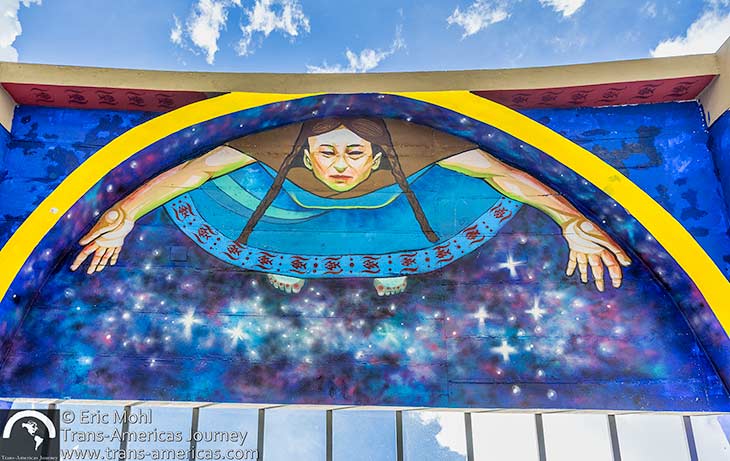 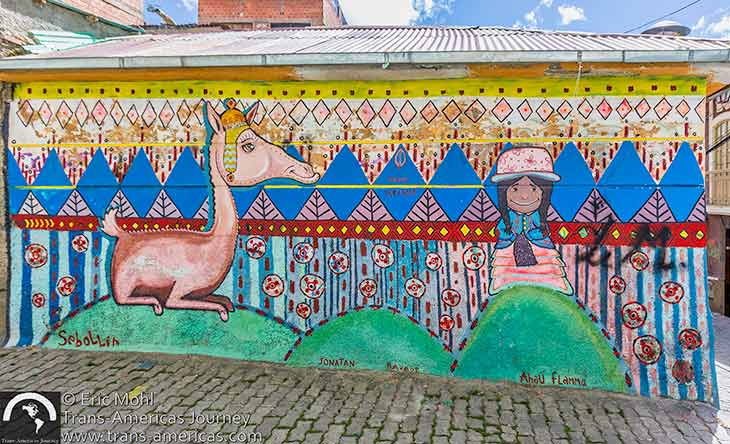 A girl and her llama.

The sun and the moon through femininity. 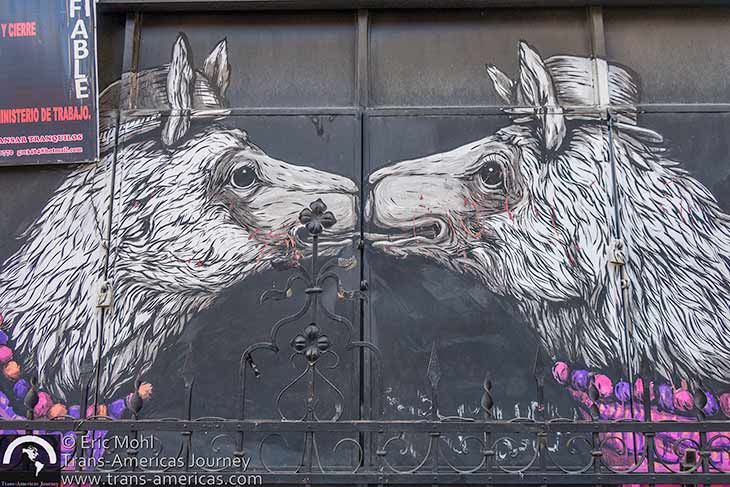 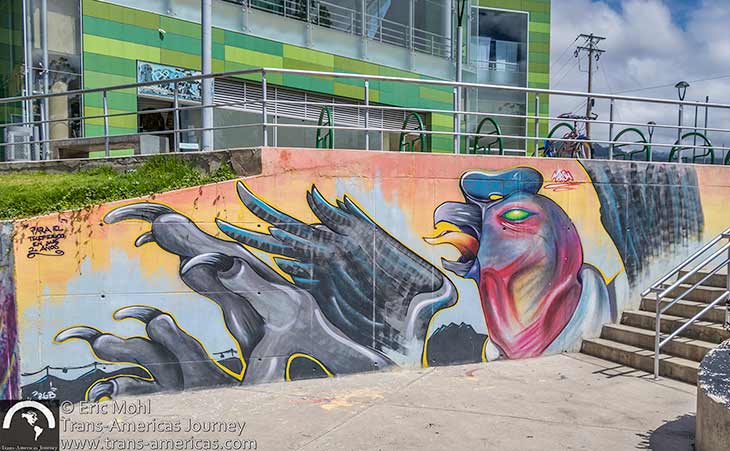 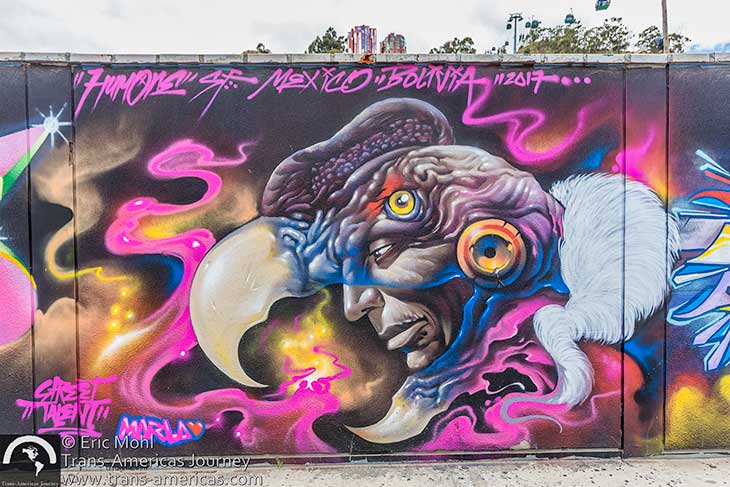 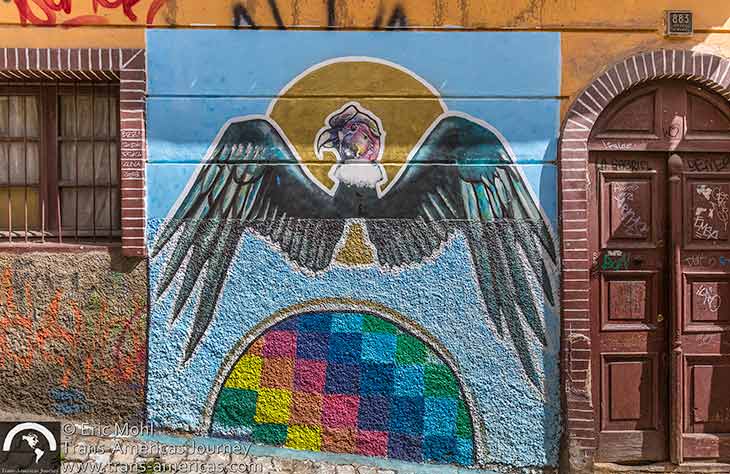 This condor is depicted over a representation of the Aymara flag which is called the wipala. 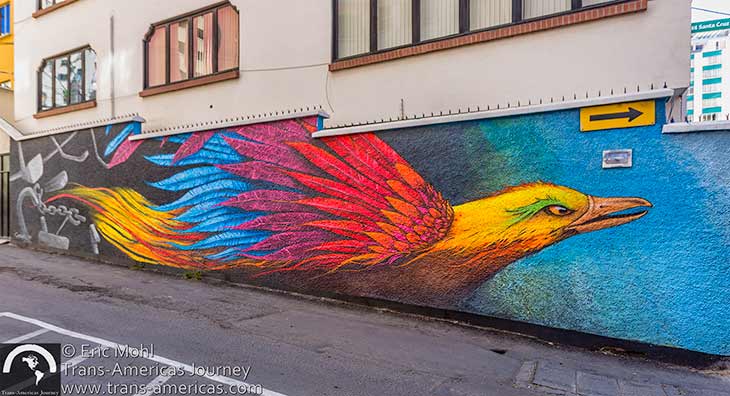 We’re glad this bird is going the right way on one way street. 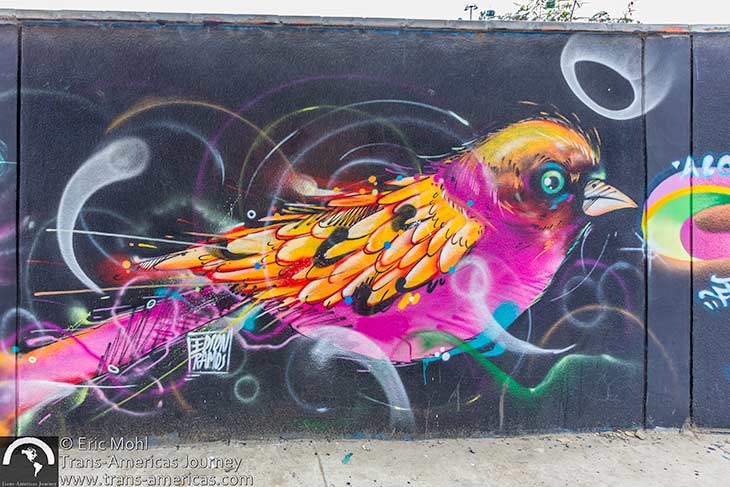 In Bolivia, colors should be as bright as possible. 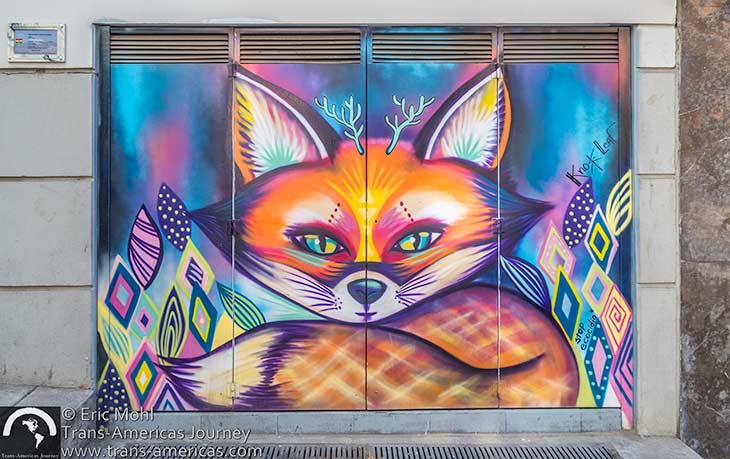 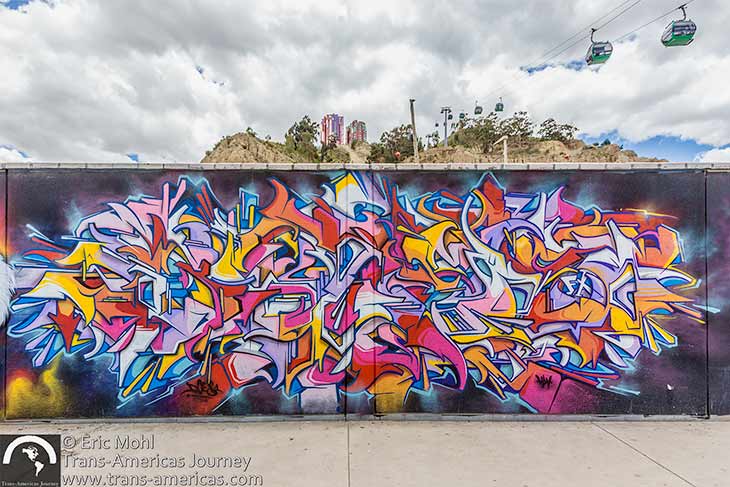 **This street art reminds us of wildstyle that sprung up in New York City in the early days graffiti’s evolution.