There have been big changes since Eric’s first trip to Placencia, Belize back in 1993–though we were happy to see that the tiny (but expanding) landing strip still exists in the midst of a giant curve in the road, sometimes requiring drivers to stop and wait for planes to clear the asphalt on their way into or out of the airport.

Unlike in 1993, the road to Placencia is paved all the way and construction of fancy homes and condo buildings is going on everywhere you look, giving the place a kind of Caribbean Hamptons 30 years ago feel. Out a long peninsula, the area has one road. In places, the sea laps up on both sides mere feet from the pavement. One of the two thoroughfares through Placencia town, at the very tip of the peninsula, is a sidewalk which, according to the Guinness Book of World Records, is the narrowest main street in the world at 4,071 feet (1,240 meters) long and just four feet (1.2 meters) wide. 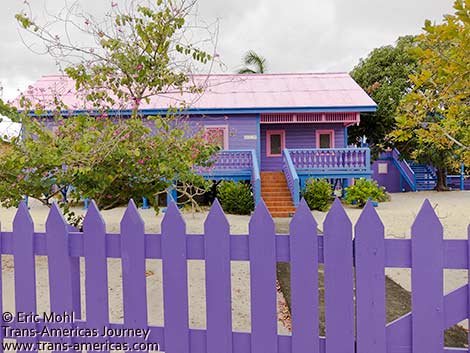 A very purple house along the world’s narrowest main street in Placencia, Belize.

The biggest change in Placencia is being spearheaded by Royal Caribbean Cruise Line which is pushing hard to build a cruise ship dock in town. When we were in Placencia this was pretty much all anyone was talking about. The locals have had numerous meetings with Royal Caribbean execs and their fancy presentations about why a massive cruise ship dock and disembarking hoards would be good for Placencia and its population of fewer than 1,000 people.

Tourism business owners and regular locals, however, have almost universally adopted a position against cruise ship arrivals and we can tell you one thing: we wouldn’t want to be on the other side of the argument. These are some determined people who love where they live. They’ve also developed a healthy dose of cruise ship skepticism after watching the months-long, petty and very public fight between Carnival Cruise Lines and local boatmen in Belize City over the cost of tendering passengers from ship to shore. 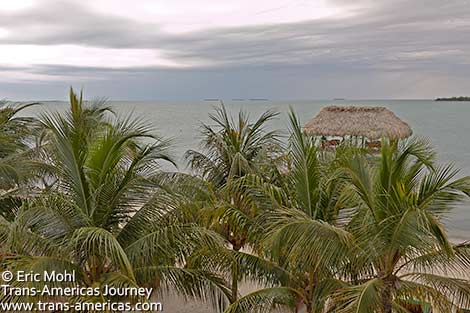 A view of the coastline in Placencia, Belize from Chabil Mar Villas.

For now, no cruise ships sully the lovely, lazy coastline in Placencia which has a strange but appealing mix of florid Caribbean shacks and florid (in a different way) McMansions.

Honestly, this tiny place with very limited infrastructure seems to be maxed out in terms of tourist facilities even without the cruise ship throngs. There are dozens of cottages, guesthouses, hotels and small locally-owned resorts (no chains yet) in most every price point.

Want a cheapie? Check the quaint options in town. Want a condo? Chabil Mar Villas has 18 of them to choose from with multiple bedrooms, laundry, and full kitchens plus a bank of three wonderful outdoor gas grills which no one seems to use for some reason. Want a world-class boutique hotel chic? Head to Francis Ford Coppola’s Turtle Inn where they’ve just renovated Sophia Coppola’s Beach House, a modern, two unit, loft-like haven, and now you can sleep there too (when she’s not there, of course). 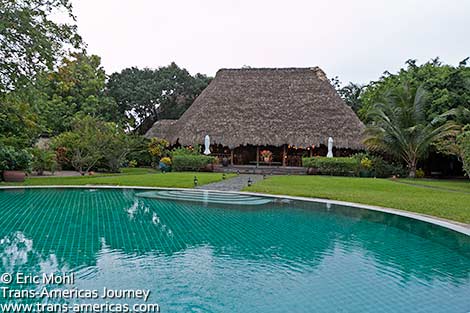 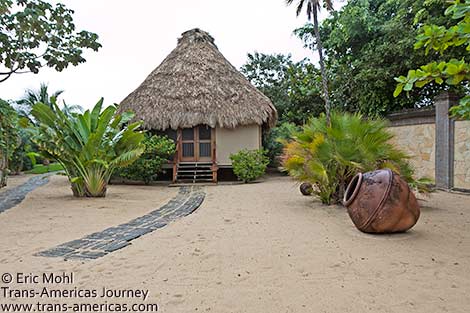 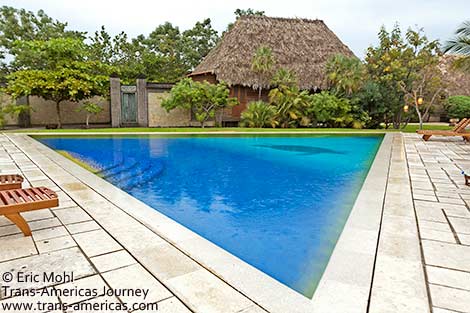 A triangular pool (the shape is a recurring theme at all three of at Francis Ford Coppola’s resorts) at Turtle Inn in Placencia, Belize.

Earlier this year, Placencia pioneers and creators of the Inn at Robert’s Grove, Robert, and Risa Frackman, sold the resort they opened back in 1997 to the same team that recently re-created the Singing Sands Inn.

Nothing new at Rumfish y Vino, but that’s the way you want it. Pamela and John Solomon opened this stylish, breezy bar and gastropub in November of 2008, mere months after honeymooning in Placencia and falling in love with the place. Timid, they are not. Nor is their eatery. Imported wine, gourmet fish tacos, inventive red curry risotto, rich shrimp bisque in a homemade bread bowl. All delicious and made more so as Aretha Franklin serenades and a stylish gang mingles. 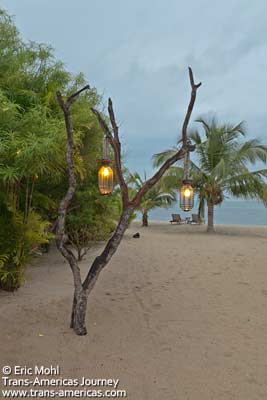