Some of the most famous tobacco in the world is grown in southern Honduras, all of it from tobacco seeds originally brought from Cuba. Here, cigars, called puros in Spanish, are made by hand and there are a number of cigar factories near the town of Danli that you can tour, including the Plasencia Cigar Factory in Danlí. 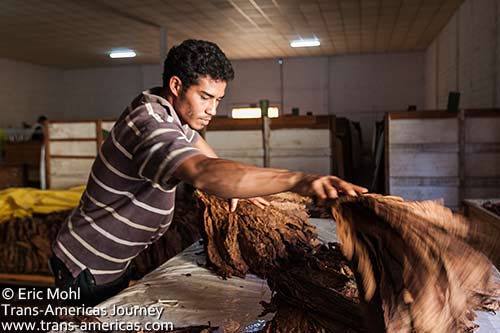 Sorting tobacco at the Plasencia Cigar Factory in Honduras.

We pulled into the Plasencia Cigar Factory, which was started by Cuban immigrant Nestor Plasencia, and within moments a man named Hector, who appeared to be the head of the entire operations, emerged from his office, popped a cigar into his mouth and lead us to the factory. Hector enthusiastically showed us around the whole facility explaining the process from seed to cigar.

Picked tobacco leaves arrive at the Plasencia factory and are sorted into various quality categories. Sorted leaves are then tied into small, neat bundles. 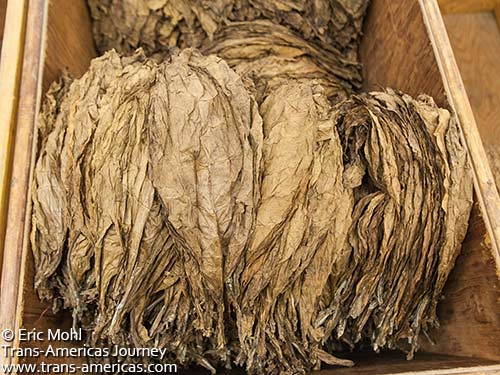 Bundled tobacco at the Plasenca Cigar Factory in Honduras. 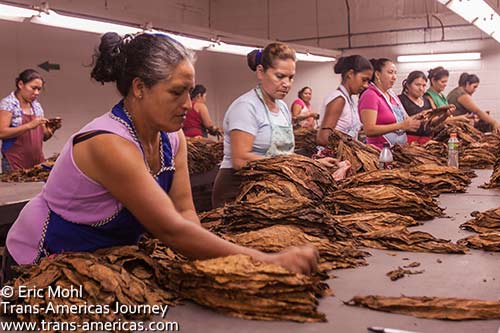 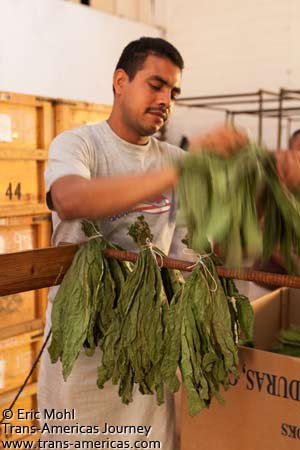 Green tobacco being hung to dry.

The tied bundles of sorted tobacco leaves are tightly stacked in vast warehouses and allowed to naturally ferment for up to a year. Fermentation enhances and polishes the taste and aroma of the tobacco, but the process produces an overwhelming amount of ammonia inside the warehouses where ventilation and even face masks are important safety measures. At times it really was hard to breathe. 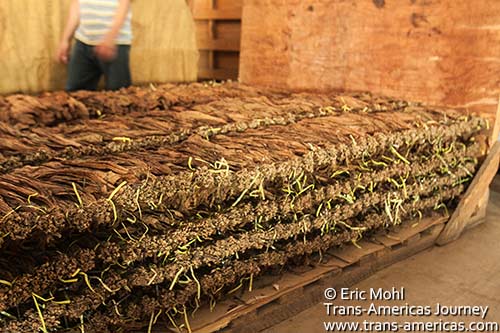 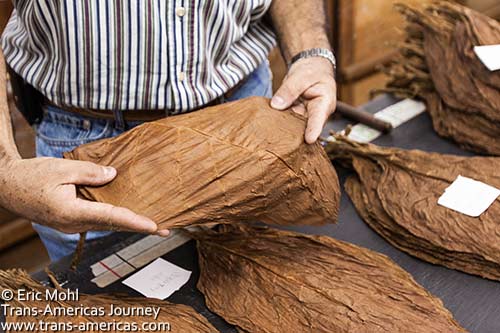 Once the tobacco leaves have fermented women expertly strip out the central vein so the tobacco burns evenly. 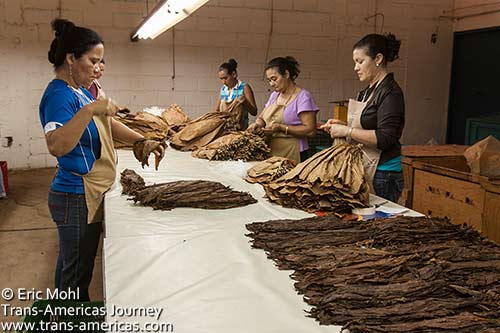 After fermenting, the central vein of each leaf of tobacco must be removed by hand. 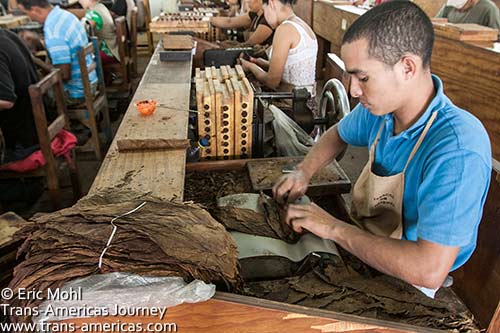 Getting ready to roll.

The main part of the cigar is called the filler. This is bundled together and placed inside a tobacco leaf called a binder because it holds all of the filler together. These rough tubes of tobacco are placed into wooden cigar-shaped molds which press them together, forcing the tubes to hold their shape. 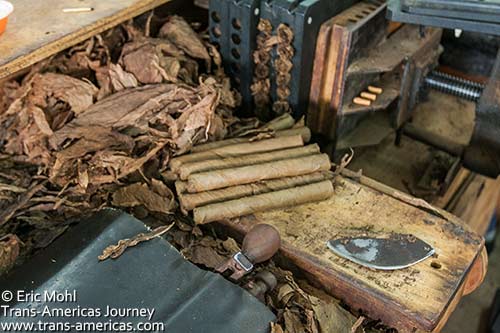 The pressed and molded tobacco tubes are then neatly rolled into a tobacco leaf called a wrapper. 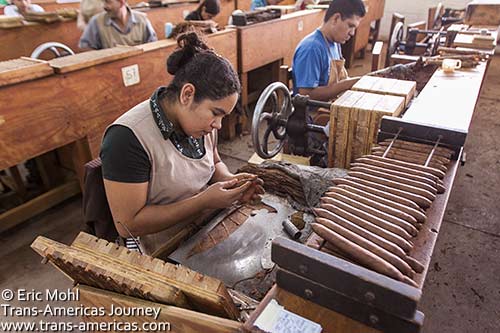 The outermost tobacco layer of a cigar is called a wrapper and is rolled last. 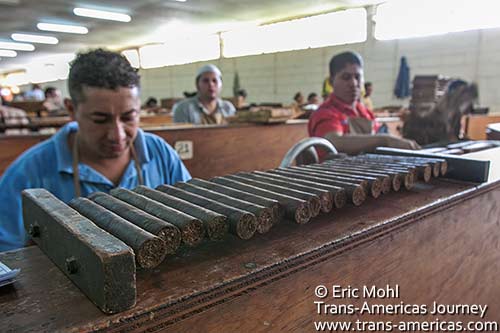 Cigars ready to be boxed and stored.

The Plasencia factory can produce tens of thousands of cigars per day in all shapes, sizes, strengths, flavors, and brands. We’re still not sure how they keep them all straight. 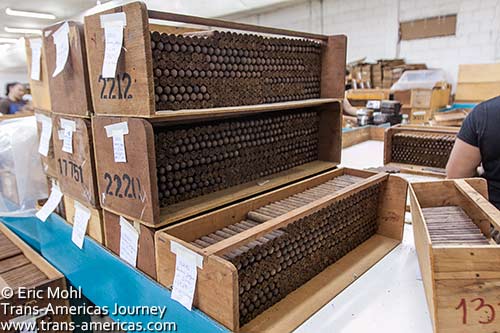 Cigars in all shapes and sizes. 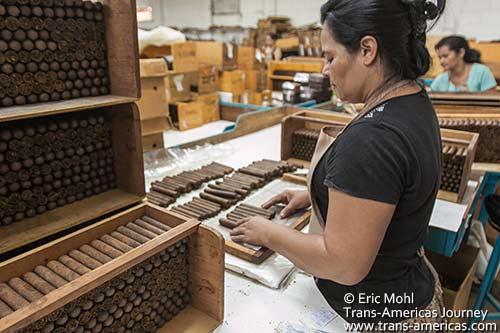 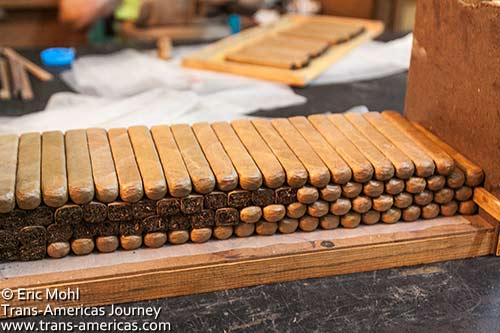 These rectangular cigars seemed odd to us.

The Plasencia factory makes cigars on contract for more than 30 different brands (their only in-house brand is called Flor de Honduras). Each brand has its own label which has to be applied by hand before they’re packaged and shipped. 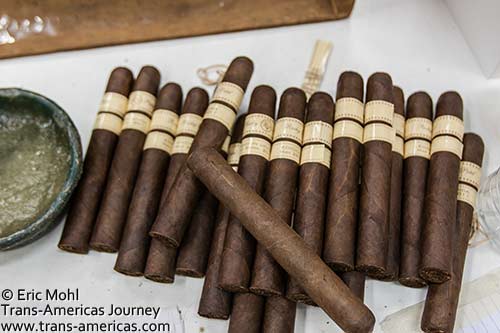 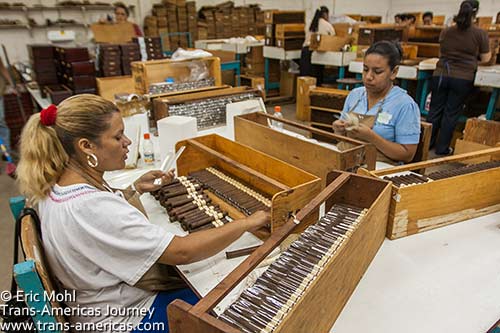 Every finished cigar must be labeled by hand. 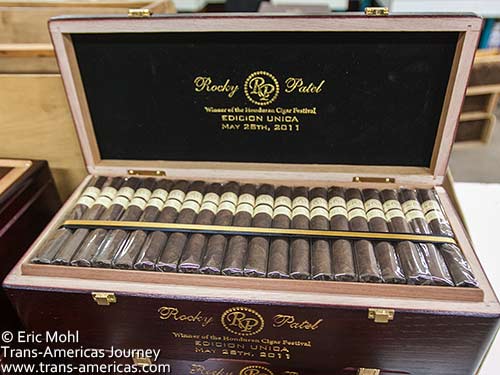 2 years: length of time it takes for a tobacco seed to be transformed into a cigar

120: number of hands that touch every single cigar from farming to finished product

4,000: number of people employed by Plasencia

30 million: estimated number of cigars produced by Plasencia factories each year, mostly on contract for more than 30 different brands including world-famous names like Rocky Patel cigars

90: percentage of those cigars that are exported to the United States