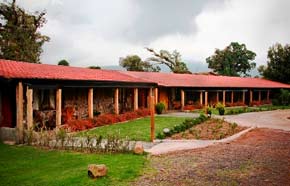 On January 8, 2009 a 6.2 earthquake struck near the town of Vara Blanca in central Costa Rica. The quake essentially leveled the place and severely damaged the Poas Volcano Lodge.  Owner Michael Cannon was away from his lodge when the earthquake happened and by the time he made it back that evening his home, lodge and dairy farm lay in ruins. “The rubble was still creaking,” he remembers. He also remembers making a decision, along with his children who are shareholders in the hotel: did he want to walk away or did he want to rebuild? Not only did they choose to stay and re-build but they turned tragedy into an opportunity to completely re-invent the Poas Volcano Lodge.

After a two year top-to-bottom renovation, Poas Volcano Lodge is a 12 room retreat which bears very little resemblance to its former existence as a re-purposed home turned into an economical, if unremarkable, guesthouse. During a 10 day trip to Costa Rica in 1970 Michael, a Brit, bought 400 acres on which he built a home. Over time, the home evolved into that first, simple hotel which he opened in 1991. From day one all of Michael’s employees have been from the local villages. Lily Arce, for example, has been with the lodge for years and currently manages the place with confidence and skill.

One very worthy exception to the locals-only rule is Beba Lobo, a firebrand from Cuba. She’s like a doting mother but with far more attitude, style and fun. She also handed all the interior design and décor during the re-invention of the lodge.

After the earthquake, what could be salvaged from the old guesthouse was re-used in the new. Reclaimed boards, for example, have been set into the polished concrete floors. Much of the rest of the wood, which is used to rich, elegant effect, came from oak trees which were cut down to accommodate road repairs in the area after the earthquake. 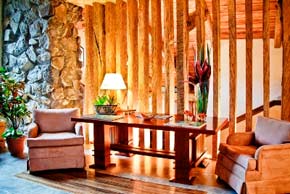 Lofty common areas feature original art, inventive, locally made wood furniture and charming miniature cast iron stoves that kick out a surprising amount of warmth—necessary at more than 5,000 feet. This is where you’ll find Michael and Beba most evenings, ready to share a pre-dinner drink and stories of the day.

Guests are greeted with a petite bowl of local strawberries which flourish in greenhouses in the region. All rooms feature more locally made wooden furniture, fresh flowers and a proper electric kettle and coffee and tea fixings including a single-serve French Press coffee maker. Bedding is imported from the UK. There are no TVs (except in the spacious games and entertainment room), but there is Wi-Fi throughout.  Locally made eco friendly bathroom amenities are another nice touch. 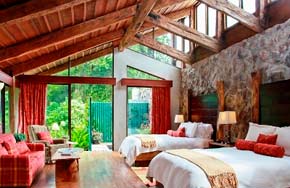 Room #2 is the smallest room in the house, but what this room lacks in square footage it makes up for in views. Guests in this room can see Poas Volcano from bed and there’s also a small balcony squarely facing the still-active cone. Room #8 is petite and not quite as luxe but it has an appealing cabin-like feel.  Room #5 is the stunner–enormous and light filled with two king beds, garden views and an outdoor Jacuzzi. A string of rooms is located in what used to be the stables, though you’d never know it from their chic river stone and wood construction, modern bathrooms and high-design interiors.

Most rooms have huge windows. One morning I watched a group of toucanettes coast awkwardly back and forth between two trees outside mine. The ever changing weather provides even more entertainment as clouds are followed by rain which is followed by sun. Repeat.

Three rustic trails on the property ramble through dairy cattle pastures and wooded hillsides (take advantage of the rubber boots and walking sticks provided). Poas Volcano Lodge is also just 30 minutes from Poas Volcano National Park, the most visited national park in Costa Rica. Often clouded in, on a clear day this active volcano is a stunner with not one but two crater lakes.

The villages in the area boast a surprising range of restaurants thanks to the fact that so many locals from nearby San Jose, the capital, travel up here on weekends. I loved Chubasco, a family run, Costa Rican roadhouse institution that’s extremely popular for its enormous grilled meat plates and for its selection of delicious appetizers including a regional specialty called tortillas alineada filled with locally made cheese and served with spicy, fresh homemade green sauce. The fried yucca was the lightest and creamiest I’ve had anywhere in Central America. 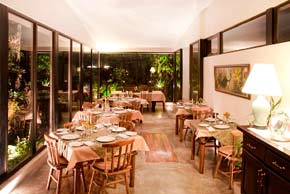 The dinner menu at the lodge changes each night but always includes two appetizer and two entrée options plus dessert, such as rich pumpkin soup, delicate sea bass Florentine, light and fluffy passion fruit mousse. All dishes are artfully made by two local women who’ve been cooking for the lodge for years.

Breakfast, included in room rates, is a buffet of luscious fruit (including more of those local hot house strawberries), homemade granola (from a recipe handed down through the owner’s family), homemade bread, homemade butter plus homemade jams and eggs to order.  It’s a fitting feast for a lodge that’s a wonderful marriage of modern style and farmhouse warmth with a whiff of English manor tossed in.