The epic drive up to the Portillo Argentino Pass in the Mendoza Province of Argentina requires navigating a short but very steep and windy road that is boulder-strewn in places and was never actually completed all the way to the pass. It’s a wonder that road builders made it as far as they did, ultimately giving up in the face of a nearly-sheer final push to the pass. Despite the harsh conditions and the road-to-nowhere feeling, this rarely-traveled road actually has an official route number. Come along on our epic drive along Mendoza RP94 to the Portillo Argentino Pass. 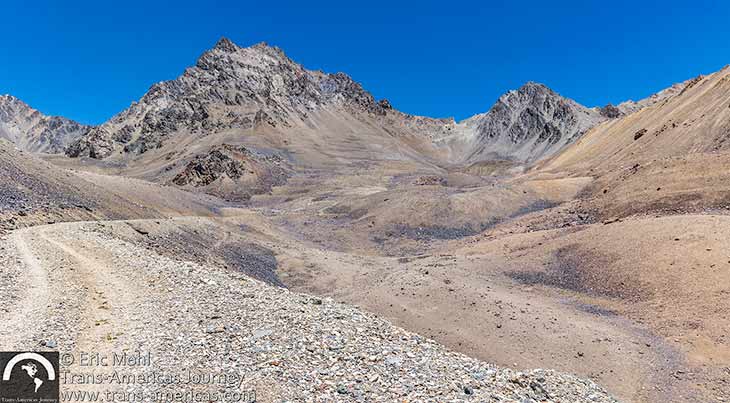 Approaching the Portillo Argentino Pass, which is almost visible in the low spot in the ridgeline that you can see to the right.

This route through the Portillo Argentino Pass and on to nearby Piuquenes Pass (which is where the actual Argentina-Chile international border lies), was a historic trading route that was used long before the arrival of the Spanish. In 1823, General San Martín passed through the Portillo Argentino Pass on his return from the liberation of Peru. And in 1935, Charles Darwin hired local mule drivers to guide him over this pass into Argentina while the HMS Beagle, the ship that Darwin was working on, was being repaired in Chile. 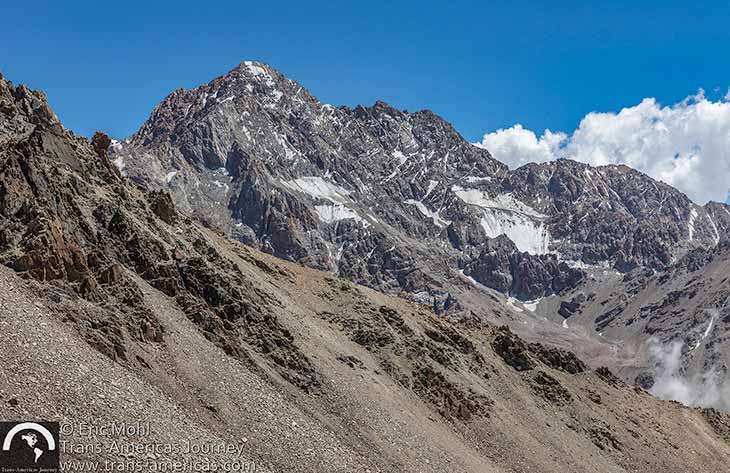 The Andes loom large during this drive.

This epic drive from Manzano Histórico to the Portillo Argentino Pass covers about 20 miles (32 km) each way, but it took us a little over three hours to travel that short distance. During slow, careful driving we climbed just shy of 8,000 feet (2,438 meters) averaging a whopping 6 mph (10 kph). 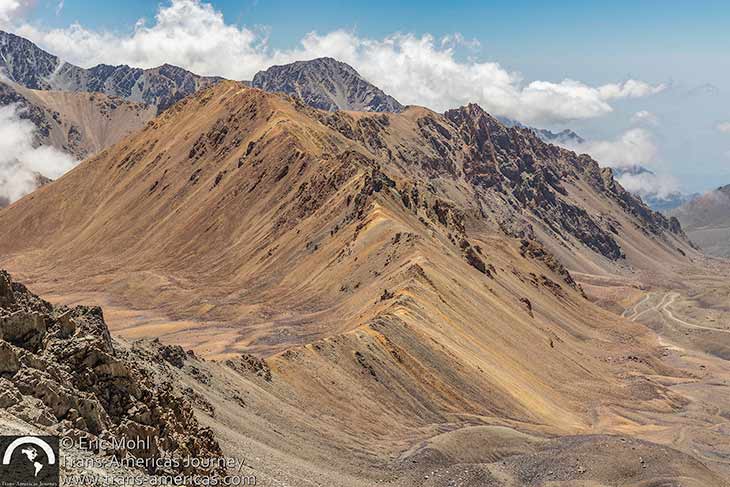 The stark beauty of the arid Andes.

At Manzano Histórico, elevation 5,577 feet (1,700 meters), we left the pavement and headed into the Andes on a challenging gravel and rock road. After a military checkpoint (required since this drive takes you close to a border with Chile) the route becomes steeper and littered with big rocks and sometimes even boulders along with many hairpin turns. You certainly need 4×4 and good clearance. Much of the drive is through the stark Reserva Natural Manzano-Portillo de Piuquenes. 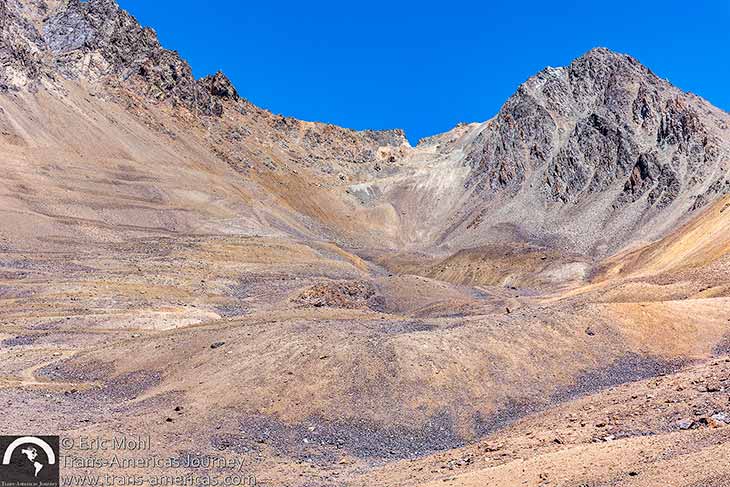 The road hairpins its way up, up, up.

At some point, there was a serious attempt to convert this old trade route into a driveable road connecting Argentina and Chile. The project was abandoned, however, and the road doesn’t actually reach the pass itself. We parked a few hairpin turns below the end of the road as the route started to become impassable. After parking our truck at 13,520 feet (4,120 meters), we walked the final 850 feet (260 meters) to the Portillo Argentino Pass itself which is at 14,380 feet (4,380 meters). 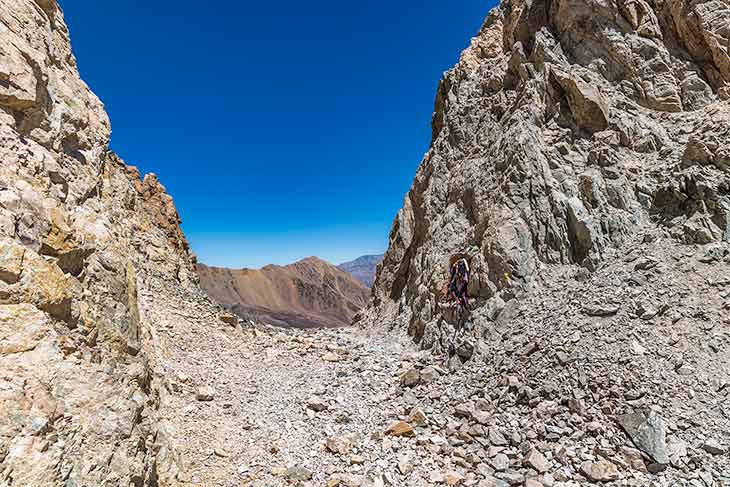 The Portillo Argentino Pass is little more than a narrow cleft in the rocks that run along this ridgeline. When we were there, it was very windy at the pass with gusts over 40 mph (65 kph). 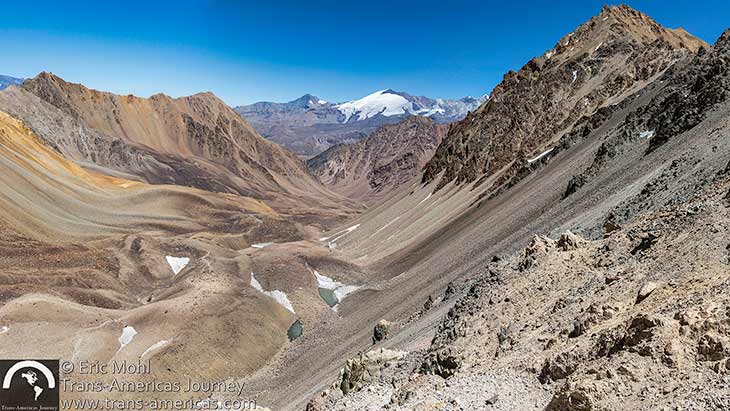 Looking toward the Piuquenes Pass and beyond into Chile from the Portillo Argentino Pass. 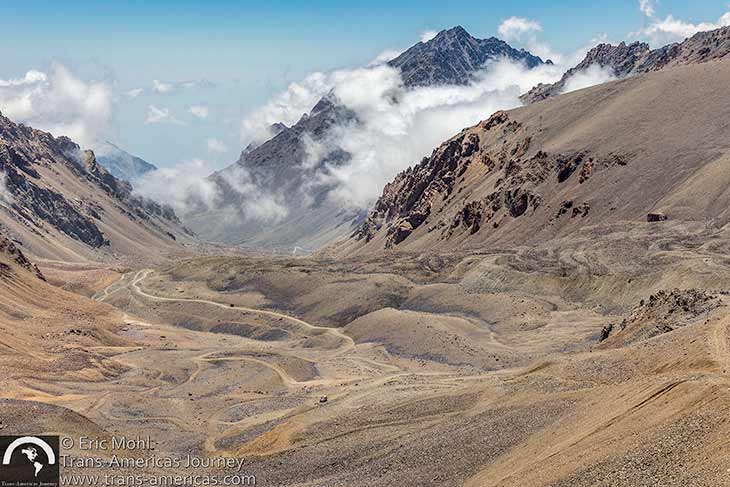 Looking down at our speck of a truck parked below the Portillo Argentino Pass.

Epic drive to the Portillo Argentino Pass by the numbers

Drive time:  About 7 hours round trip from Manzano Histórico including the hike up to the pass

See our Epic Drive road trip driving route to the Portillo Argentino Pass in the map below.