The Heart and Soul of Handicrafts – Pueblos Blancos & Masaya, Nicaragua

The Pueblos Blancos (White Towns) are reached by traveling about an hour from Managua. The towns got their collective name either because of the stark white churches that anchor their central squares or the fact that their streets used to be paved with a white limestone concoction or the fact that the buildings used to be painted white to ward off bad spirits. It depends on who you ask. One thing is not in dispute: the Pueblos Blancos are the heart and soul of handicrafts in Nicaragua. We also found the best street food in the country (Andrew Zimmern endorsed) and managed to miss one of the oddest festivals in the world (hint: it involves bull penises). 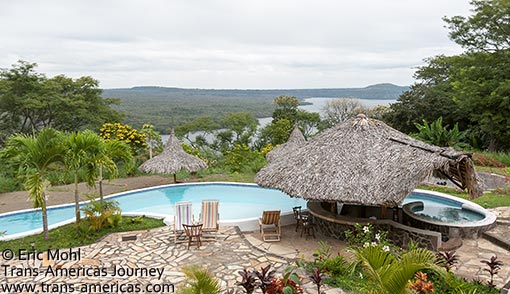 Hacienda Puerta del Cielo Eco Spa is in the jungle outside Masatepe and offers one of the best views of Lake Masaya and Masaya Volcano.

The best handicrafts in Nicaragua

The road leaves Managua behind and is soon lined with family run furniture stalls acting as both shop and workshop. Rocking chairs are a favorite item and a staple of life in Nicaragua. The town of Masatepe fancies itself the rocking chair capital of the country, but the handmade furniture on offer runs the gamut from some truly well-crafted dining sets to amazingly kitchy children’s beds.

If it’s decorative pottery or dishes you’re after, head to San Juan de Oriente. And for houseplants, head to the seemingly endless greenhouses in Catarina. You could furnish your whole house (tacky or tasteful) and do your landscaping too without ever leaving this area. Many people do.

The oddest festival in Nicaragua

Every town in every country in Latin America has an annual festival to honor their particular patron saint. It’s a good excuse to muddle up piety and partying and residents look forward to and plan for their patron saint days all year-long.

Things are done a little differently in the Pueblos Blancos of Diria and Dirioma where, every year, their patron saints are honored with a “dicking” festival during which presumably drunk adults (read: mostly young men) wander the streets whacking each other with dried out, elongated bull penises. This phallic fun is not done anywhere else in the country for fairly obvious reasons. Sadly (sort of) we missed this festival. 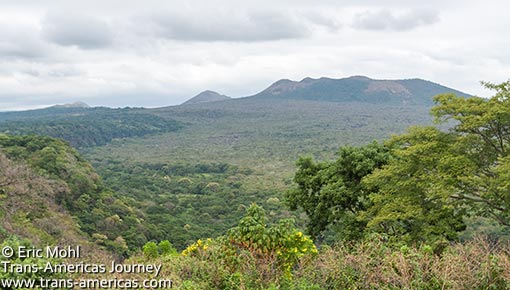 Masaya Volcano looms over the Pueblos Blancos region of Nicaragua and became dangerously active in 2012.

The best street food in Nicaragua

Furniture and bull penises take a back seat to serious eats in the nearby town of Masaya. Though not technically a part of the Pueblos Blancos it’s close enough and worth a stop especially around 5 pm when a desolate triangle of concrete near the Don Bosco school in a barrio called Monimbo is transformed into El Tiangue (The Market), your source for the best street food in Nicaragua. 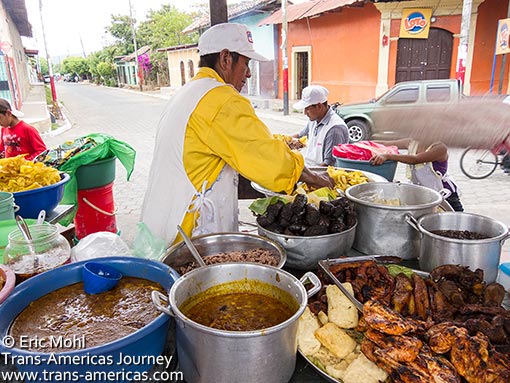 Welcome to El Tiangue in the town of Masaya, a nightly festival of the best street food in Nicaragua.

Tables heave under loads of artesanal cheese, grilling meat of all descriptions, frying plantains, mountains of rice, stacks of sticky homemade sweets, and a whole bunch of stuff we struggled to identify. There’s a reason Bizarre Foods with Andrew Zimmern visited this open-air street food wonderland while filming the show’s “Nicaragua” episode.

Nicaragua is full of fritangas–basic street stands selling grilled meat, chopped cabbage and rice and you’ll eat at plenty of them while you’re in Nica. But Masaya’s El Tiangue takes the fritanga (and more) to a whole new delicious level. We had some of the best grilled chicken we’ve had in our entire lives here, piled high on a plate with rice, crunchy cabbage salad, and crispy, salty plantains for shockingly cheap prices. If you’re lucky you might even snag one of the few tables and chairs or just perch on a ledge and dig in with the locals. 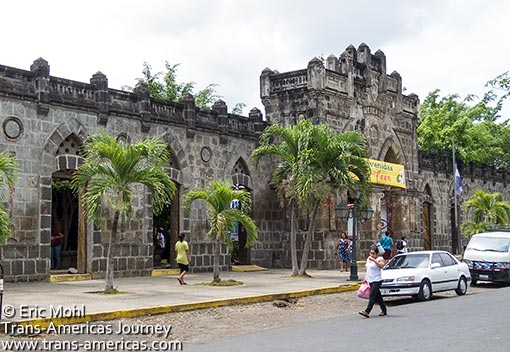 The open-air stone market building in Masaya is a pleasant place to wander and search for quality among the souvenirs on offer.

Masaya is also home to the sprawling Mercado Viejo (Old Market). The open-air stone market building is a breezy place for an enjoyable stroll and there are some quality finds here but most of the “handicrafts” are ho-hum. Bear in mind that Masaya is especially known for its hand-woven hammocks. 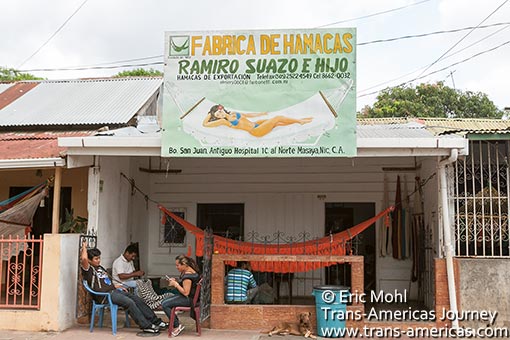 The town of Masaya is famous for handmade hammocks, not sign makers.

There’s also a malecon (promenade) in town with views of Masaya Lake at the foot of the massive (and recently very, very active) Masaya Volcano.They say the lake, formed in one of the volcano’s dormant craters, is more than 200 feet (70 meters) deep in the middle.

Masaya’s central square is a fine place for a cold Toña, the official beer of Nicaragua, and some quality people watching in the evening after you’ve stuffed yourself silly at El Tiangue. 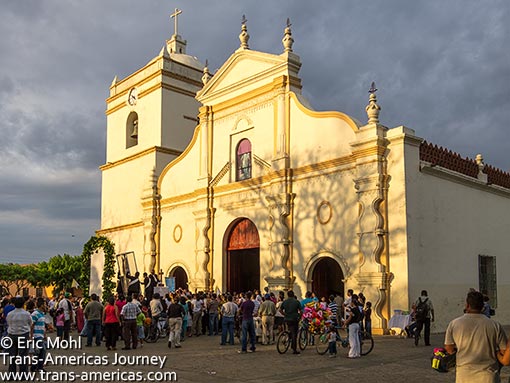 Locals gather at the central church in Masaya as the sun goes down.