You may have never heard of San Gerardo de Dota but if you’re traveling to Costa Rica and you have your heart set on exploring some of the country’s famous cloud forests this is the much cooler cloud forest option you need to know about. 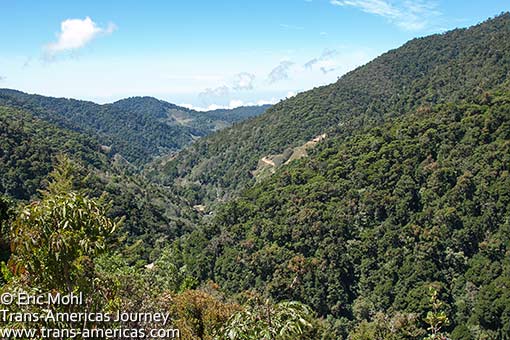 Cloud forest as far as the eye can see and not a tour bus in sight near San Gerardo de Dota in Costa Rica.

You will be tempted to head to Monteverde Cloud Forest Biological Reserve which covers 26,000 acres (10,500 hectares) and attracts nearly 100,000 visitors a year. When we visited Monteverde we were inspired to call it Disneyland, Only Damper, so take our advice and head to San Gerardo de Dota for a much cooler cloud forest fix without the crowds.

The town of San Gerardo de Dota, about 50 curvy, mountainous miles (80 km) from San José, clings to the steep hillsides of the Talamanca Mountains. The Savegre River slices through the valley and in 2005 a 12,000 acre (5,000 hectare) hunk of cloud forest near San Gerardo de Dota was set aside as Los Quetzales National Park.

There are many different types of forests and ecosystems at various elevations in the region and that hosts incredible biodiversity–we’re talking hundreds of thousands of different species. Most of them are insects, but some of them aren’t, including the resplendent quetzal, a bird you most definitely want to see and namesake of the area’s national park. 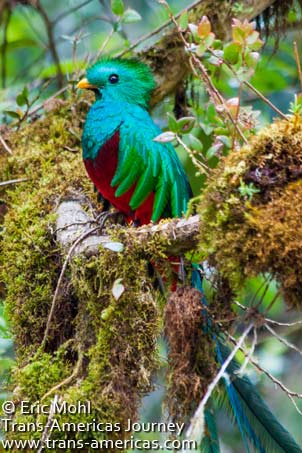 This is a resplendent quetzal, just one of the thousands of species that need cloud forest environments to survive.

By 6 am we’d finished breakfast and were piling into the extremely cool restored 1973 Land Cruiser owned and operated by Dantica Cloud Forest Lodge. Our guide, Carlos, navigated the steep dirt road down into the valley and about 10 minutes later we were parked near a trail head and off in search of quetzals. 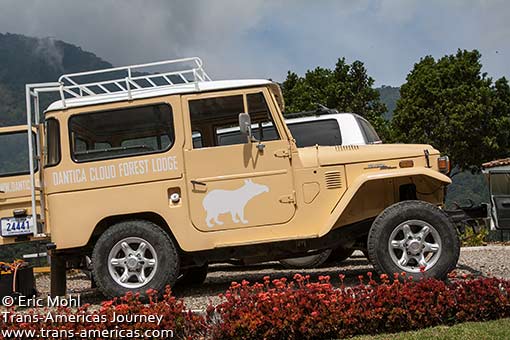 Dantica Cloud Forest Lodge operates this restored 1973 Land Cruiser in San Gerardo de Dota and it’s way cooler than any tour bus ever could be.

After walking about a hundred yards we reached a dead tree trunk. Carlos knew that a hole in the trunk had become home to a quetzal family so we staked it out the nest with tripods, cameras and spotting scopes. Then we waited. And waited.

An hour later the female quetzal appeared. Female quetzals are certainly colorful with their yellow beaks and green, red, and blue plumage. However, they don’t hold a candle to the male of the species which sports a pair of three-foot-long iridescent tail feathers during the breeding and nesting season (April to June). 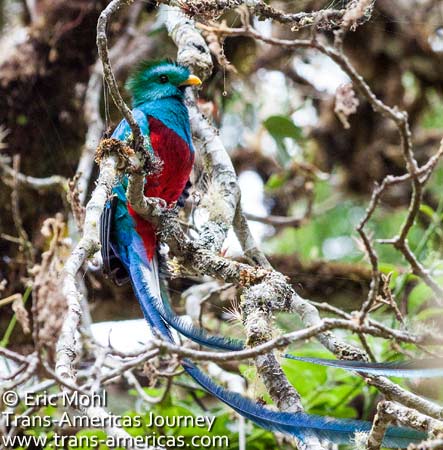 Finally, the male quetzal turned up and the pair took turns darting into and out of the tiny hole in the tree trunk bearing agaucatillo fruits in their beaks. These mini avacados are one of the few things quetzals eat and the young are reared on it. Daddy’s tail feathers were way too long to fit inside the small nest hole and stuck out comically as he came and went. 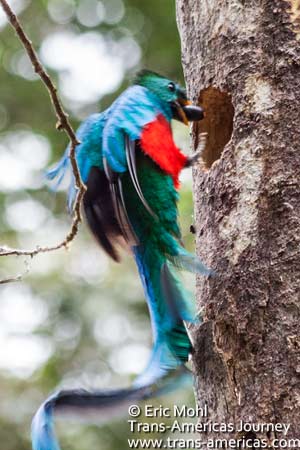 A male resplendent quetzal squeezes into its nest with an aguacatillo fruit in its tiny yellow beak delivering room service for his chicks. 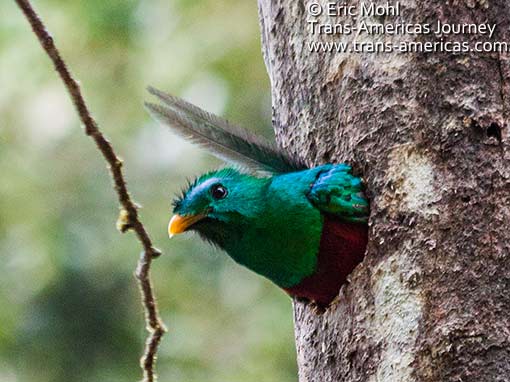 A male quetzal prepares to leave its nest after bringing a snack to its chicks. 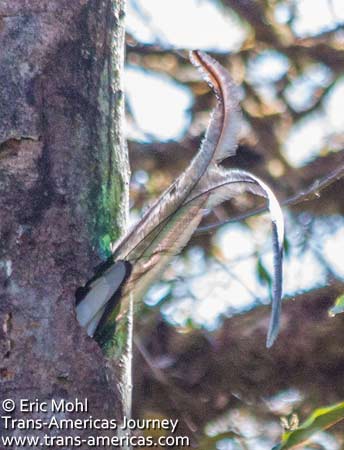 The tail feathers of a male quetzal are too long to fit inside its small nest hole and often stick out comically.

Greedy for more, we hiked/ran through the forest in hot pursuit of the male when it lit out from the nest. Our efforts were rewarded with some wonderful glimpses of the bird perched in the sun. This was the fourth time we’ve seen quetzals in the wild and we can assure you that it’s a thrill every time. There really is no other bird like it. 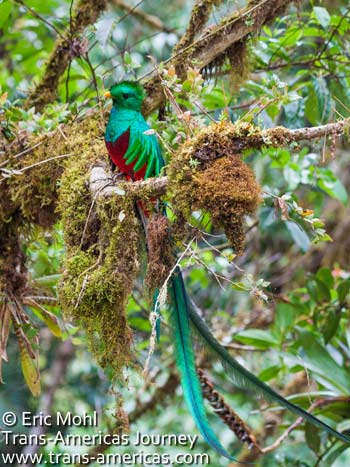 We bush-wacked through the cloud forest to follow this male quetzal and were rewarded with this perfect perch.

A male resplendent quetzal in flight, tail feathers streaming behind it.

After our  successful morning with Mr. and Mrs. Quetzal we returned to Dantica to explore the 3 miles (5 km) of steep trails on the lodge’s 50 acres (20 hectares) of protected land. The reserve and lodge were created by Joost Wilms, a biologist from Holland, and his wife Maria Luisa Castro Fernández, a textile designer from Colombia.

Joost spent years working in the Amazon studying tapirs which are called dantas in Spanish. Joost’s nickname in the Amazon was Dantica or “the little tapir” hence the name of the lodge. 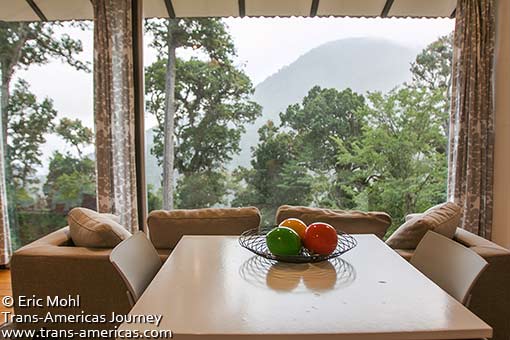 Sadly, our time in San Gerardo de Dota was tapir-free so our quest to see these bizarre and shy creatures in the wild continues. Still, we happily settled for the comforts of their namesake eco lodge which includes 10 stand-alone bungalows with floor to ceiling windows overlooking private and protected cloud forest, ethynol-fueled heaters (though it still gets cold in the rooms since Dantica is located at 8,000 feet / 2,500 meters), and jetted tubs plus a fantastic restaurant. For more, read our full review of Dantica Cloud Forest Lodge. 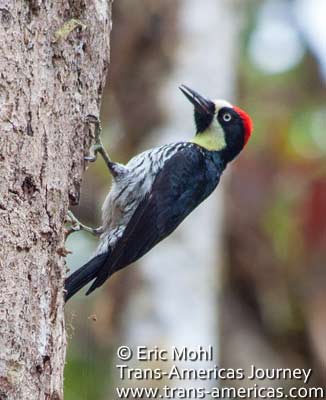 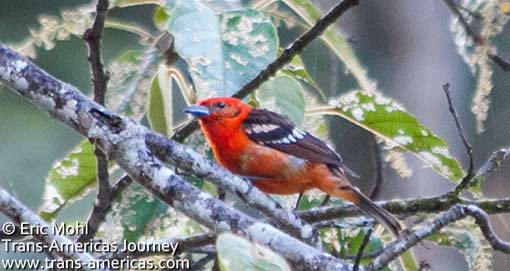 If Dantica is too spendy for your travel budget we can highly recommend the nearby, basic wood cabins offered by Miriam who also runs the best economical restaurant in San Gerardo de Dota. Rates are US$30 for double occupancy in one of a handful of different cabins with views, private bathrooms, electricity and porches. Even better? Guests get US$1 per person off the deliciously home made and reasonably priced meals Miriam serves at her small eatery up the main road toward the highway. Check in there regarding the cabins as well.