The Quilotoa Loop in Ecuador is a circuit that encompasses Quechua culture, high-altitude landscapes, and the epic Quilotoa Crater Lake. The Andean towns are small, the Andean views are large, and the roads are (mostly) dirt. You may even get to crash a wedding during this South American travel epic drive adventure. 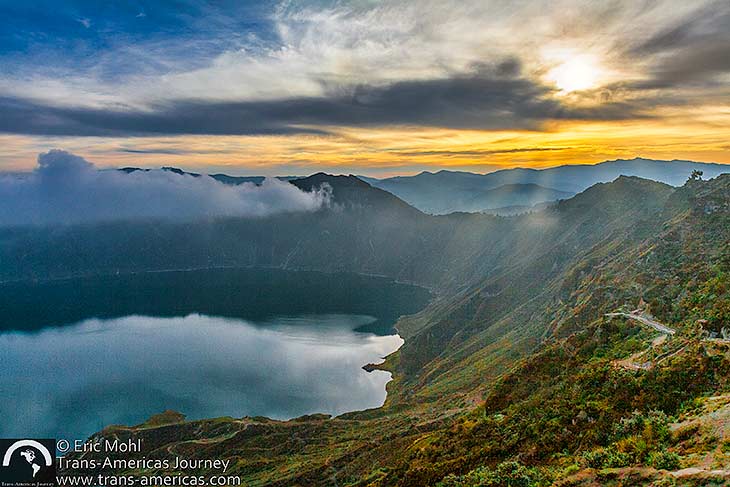 Sunrise at the Quilotoa Crater in Ecuador.

Many people explore this popular area not far from Quito. You can do on an organized tour, you can do it by bus, you can hire a car and drive, or you can hike portions (or all) of the route. Of course, we spent our time driving the Quilotoa Loop. Here’s how it went.

The 3-hour drive from Quito to the village of Isinliví was gorgeous and uneventful. Mostly. We drove around Quito, and shortly past Cotopaxi Volcano and National Park we turned off the Pan-American Highway past the twin peaks on Illaniza Volcano. During the final 20 miles (32 km), however, we wandered on some back roads and we encountered a long and jarring section of cobblestones. That gave way to a dirt road that became increasingly narrow with increasingly steep drop-offs as we climbed up to 13,000 feet (3,962 meters). 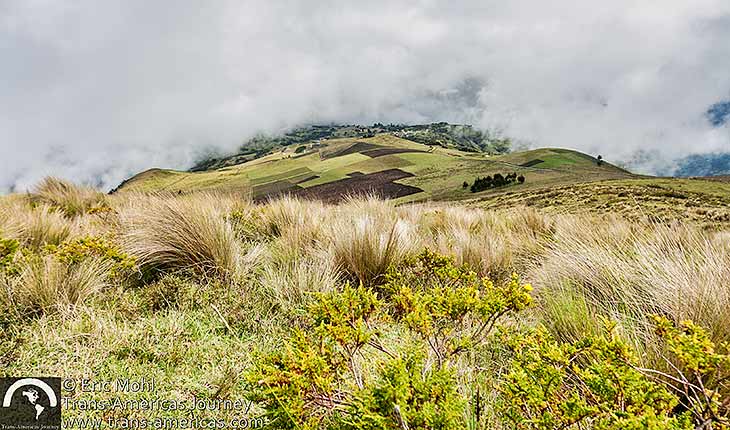 Páramo and farmland near the town of Isinliví on the Quilotoa Loop.

We passed páramo landscapes, a few cultivated fields, saw only three other people and began to wonder if there was a town ahead of us at all. Then we dropped down to about 9,500 feet (2,895 meters) and entered the surprisingly large town of Isinliví. 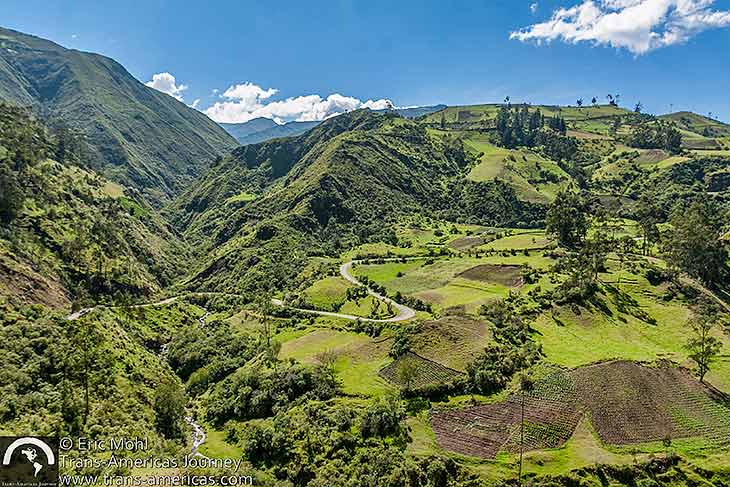 Leaving the town of Isinliví.

In Isinliví, we headed straight for the LluLlu Llama Mountain Lodge and you should too. This place is clean, stylish (adobe and exposed beams), homey, warm, and comfortable no matter whether you choose a dorm bed, a farmhouse room, or one of the splurgier mountain rooms and standalone cottages (US$20 to US$40 per person per night including breakfast and dinner). The food was also fantastic featuring homemade bread, local eggs, and hearty dishes like shepherd’s pie. It was hard to leave, but we had a loop to finish. 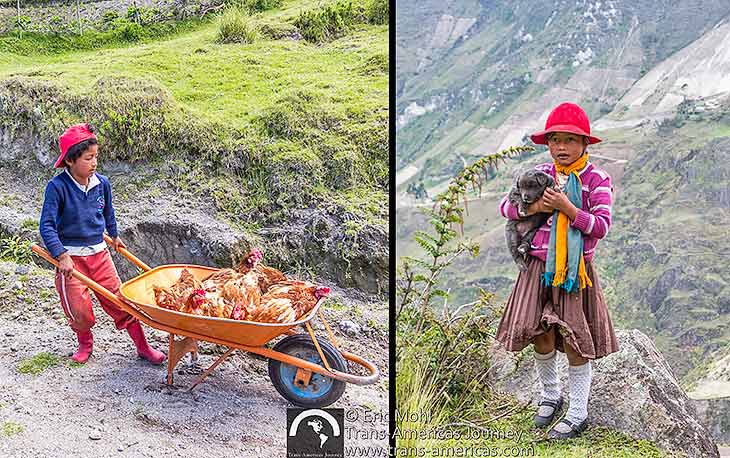 Kids and their farm friends along the Quilotoa Loop in Ecuador.

From the town of Isinliví, we avoided the mostly paved route to the Quilotoa Crater and opted for a more adventurous back route. We drove for about two hours along dirt roads of varying degrees of bumpiness through dramatic canyons and past steep cultivated hillsides and waving locals before reaching the Quilotoa Crater at more than 12,700 feet (3,900 meters). This is one of the top destinations in Ecuador and it shows. Guesthouses seem to multiply before your very eyes and there are visitors (local and foreign) everywhere, especially on weekends. 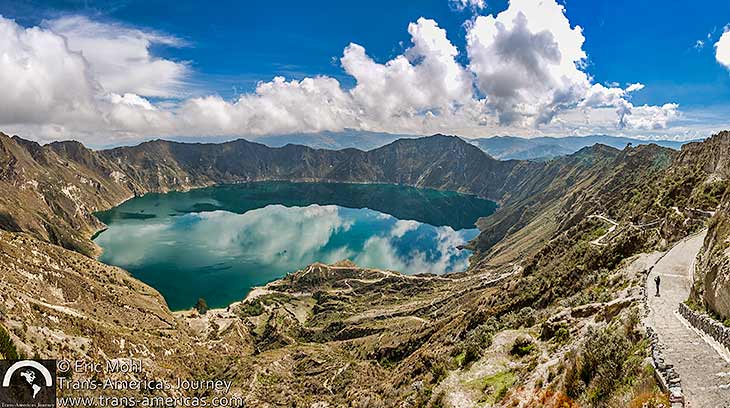 After a quick picnic lunch of leftovers, we headed down the steep and winding trail to the intensely blue lake that’s formed in the quiet crater of the dormant Quilotoa volcano (the last eruption was in 1280). Some locals believe the lake is bottomless, but science tells us it’s just very, very deep (about 820 feet or 250 meters).

The trail from the rim to the crater lake is about one mile (1.6 km) each way, descending (the ascending) 920 feet (280 meters) from 12,800 feet (3,900 meters) elevation at the rim. Allow at least 40 minutes down the trail and an hour back up. Kayaks can be rented if you want to paddle around the crater lake while you’re down there and enterprising locals also rent horses for those who can’t make the hike. 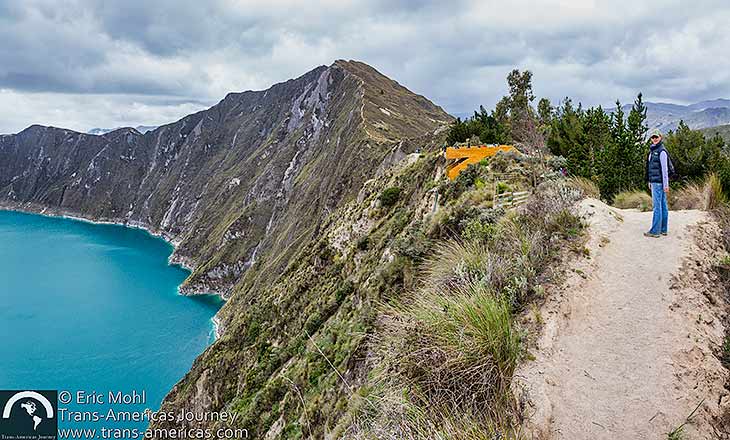 Karen walking part of the loop trail around the Quilotoa Crater.

You can also walk along a 6 mile (10 km) rim trail and it’s worth heading out on that trail for about 1.5 miles (2.4 km) just to see the strikingly modern wood, glass, and steel viewing platform, designed by architects Javier Mera, Jorge Andrade, and Daniel Moreno, that juts out over the rim near the Shalala community. 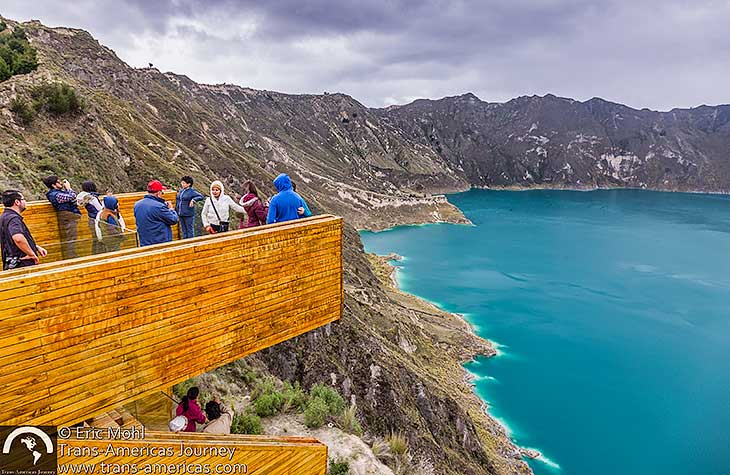 The angular and daring Shalala mirador overlooking the Quilotoa Crater in Ecuador.

By the time we are back up on the volcano rim above the crater lake, the fog had rolled in and the temperature was dropping fast, so we settled into Hostal Chukirawa where a private double room with private bathroom and a wood-burning cast-iron stove is about US$50 including breakfast and dinner. The owners have also glassed in a previously open part of the hostal to create a kind of greenhouse which keeps everything warmer. 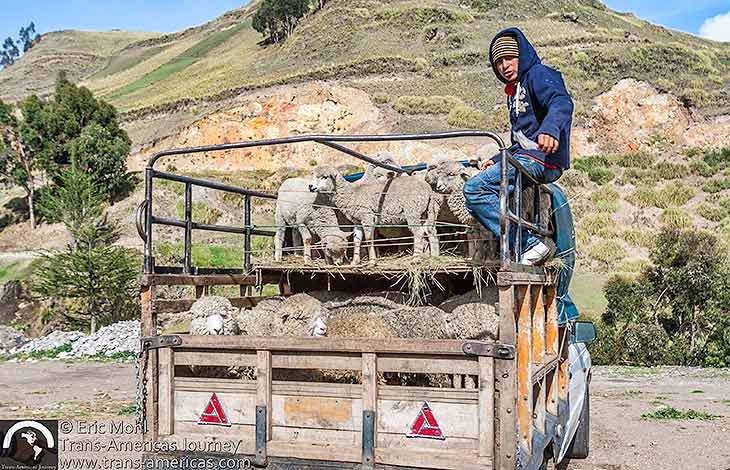 Bringing sheep to market in the town of Zumbahua.

We got up early and hit the road by 6:30 am in order to reach the nearby town of Zumbahua for the Saturday market. The animal market was wrapping up by the time we got there, but the colorful vegetable market was in full swing. 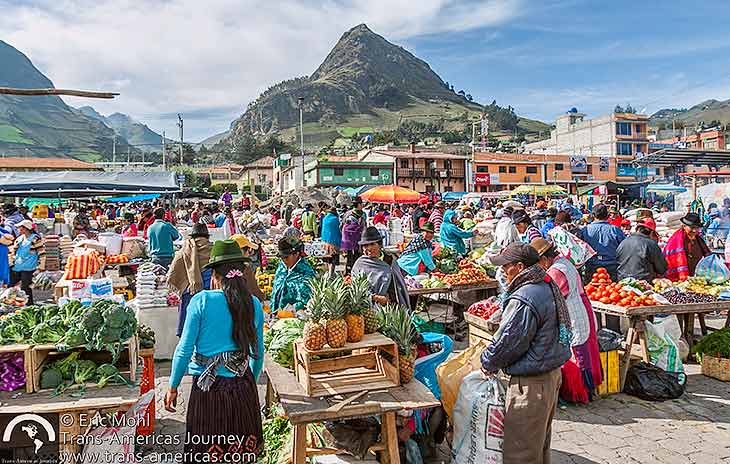 You’ll find plenty of locals shopping for daily necessities and no tourist junk at the Zumbahua market.

The Zumbahua market is a true locals’ market full of all things useful (fresh food, cheap household necessities, clothing, etc.) with no sign of made-for-tourists garbage. 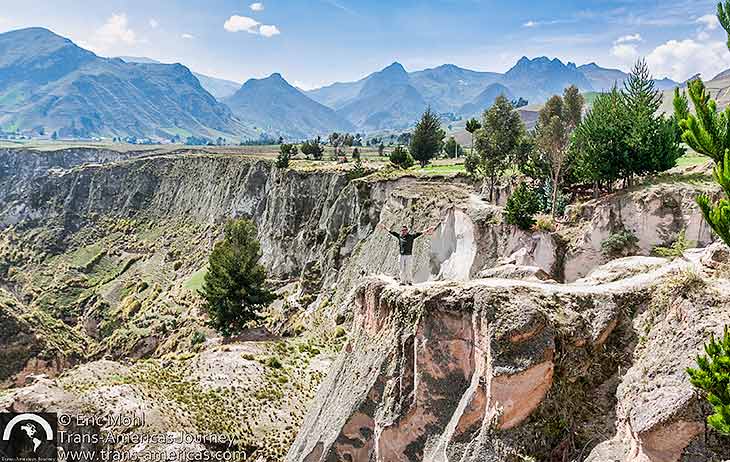 Eric on the canyon rim about the Rio Tochi.

From Zumbahua we doubled back past the crater, then onward toward Chugchilan with a quick stop at the Tochi viewpoint to peer into the deep Cañon del Rio from the edge of the canyon rim. From there the road was partially paved and we moved easily along until we reached a house with a party going on out front. 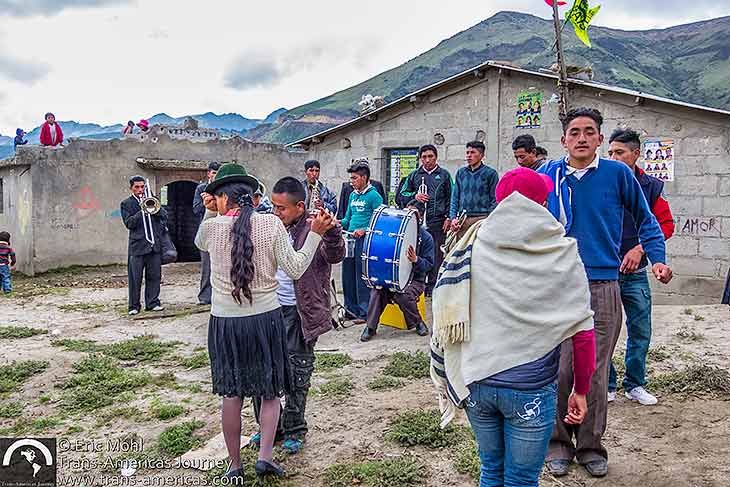 We crashed this wedding so hard.

The partiers waved us over, so we stopped the truck and joined in the dancing and beer drinking to help them celebrate a wedding. A band featuring huge drums, a trombone, and more, kept it all going. It was 11 am and the groom was already extremely drunk. His bride followed him around with a bottle of beer and, for reasons we can’t explain, there was a large number of chicken feathers neatly arranged in a rectangle in front of the house.

In Chugchilan we checked into the Cloud Forest Hostal where a private double room with a private bathroom is about US$40 including breakfast and dinner.

The 6-hour drive from Chugchilan to the city of Latacunga delivered more miles of dirt road and more páramo landscapes (called bosque nube, or cloud forest, locally) at elevations so high that on a clear day you can see the coast from here. However, with a name like “cloud forest”, clear days are few and far between. 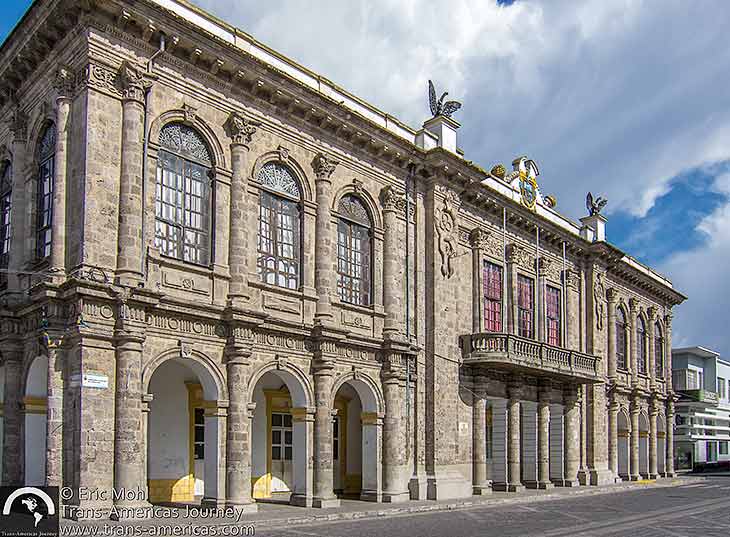 The Municipal Plaza in Latacunga, Ecuador.

All in all, it was a gorgeous drive and Latacunga seemed like a big city after the small villages and Andean countryside we’d been exploring. We arrived in Latacunga on a Sunday and many things were closed, but we got a room at Hostal Central (where about US$25 got us a private double room with private bathroom). Then we wandered around town. 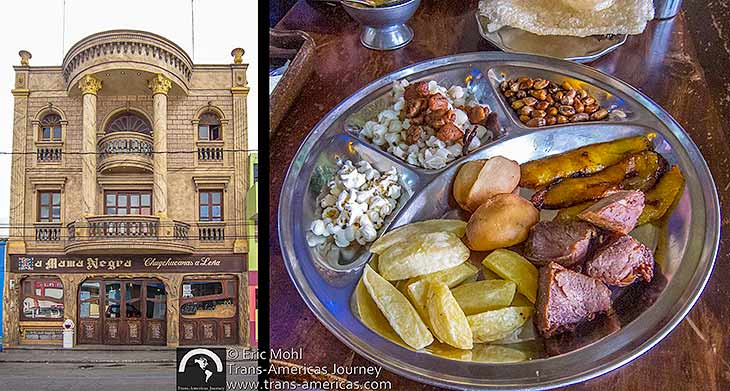 Don’t leave Latacunga without trying a regional dish called chugchucaras which is a heaping helping of fried pork, fried plantains, mote (a type of corn), potatoes, popcorn (yep), and chicharron. Plenty of places in Latacunga serve chugchucaras, but we enjoyed our pork-filled plate at a wackily designed downtown restaurant called La Mama Negra. 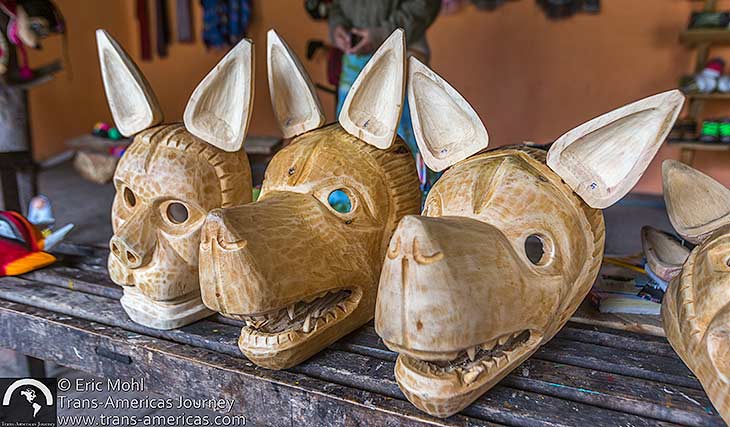