We’d decided to blow off the Quiriguá archaeological site in Guatemala. Then our plans changed and we paid a visit to this site full of some of the tallest and heaviest carved stone stele and zoomorphic boulders in the Mayan world. 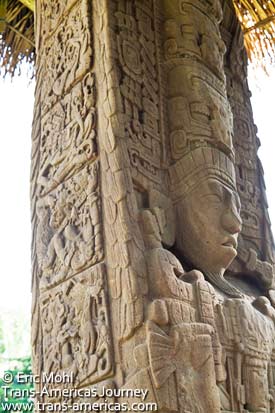 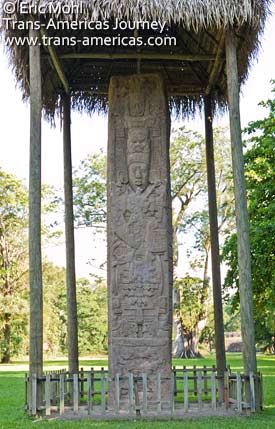 Stele E is 35 feet (10.6 meters) high and weighs 65 tons and may be the largest stone ever quarried by the ancient Mayans.

We knew that the Quiriguá archaeological site is home to amazing carved stone stele, but we were put off by the 80Q (US$10) entrance fee–higher than almost any other Mayan site in Guatemala other than Tikal. But when our travels took us past the remains of this post-classic period Mayan city for a second time, we took it as a sign and decided to shell out US$20 and visit the site.

Quiriguá really does have some of the most massive and most unusual carved rock in the entire Mundo Maya (southern Mexico, Belize, Guatemala, and Honduras).

For example, stele F clocks in at 24 feet (7.3 meters) high and when it was raised in 766 AD it was the tallest monument ever erected by the Mayans. That is until the folks of Quiriguá put up stele E 10 years later, which is 10 feet (3 meters) higher than stele F.

At 35 feet (10.6 meters) high. including the buried portion holding it in place. and weighing 65 tons, archaeologists believe stele E is the largest stone ever quarried by the ancient Mayans. It may even be the largest free-standing worked monolith in the New World.

Inhabited as early as the 2nd century AD, what remains of the civilization at Quiriguá (now surrounded by vast banana plantations operated by United Fruit Company, aka Chiquita Bananas) was made a UNESCO World Heritage Site in 1981.

About a dozen stele have been excavated, protected, and displayed at the small site. Many relate portions of the city’s history and the feats of its various leaders. There are also carved calendars, of particular interest in 2012 since the epic Mayan calendar mysteriously ends on December 21, 2012 sparking all kinds of theories (end of the world? chance for a new beginning?) and increased interest in the Mayans. 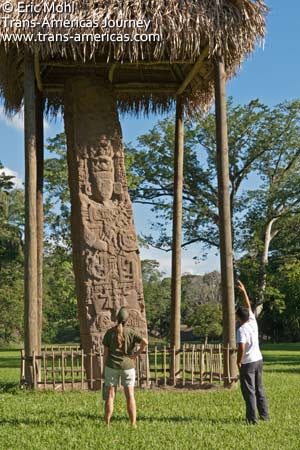 Also of note: many of the figures carved into the stele at Quiriguá are wearing
unusually ornate headdresses and some even have beards. We only saw these elements on stele at a handful of the other 100+ Mayan sites we’ve visited on our Journey. 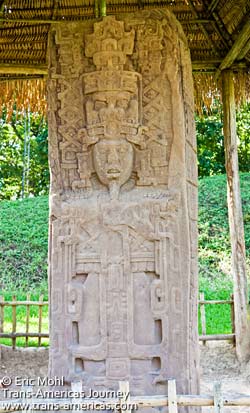 Stele C was one of the first stele erected at Quiriguá. 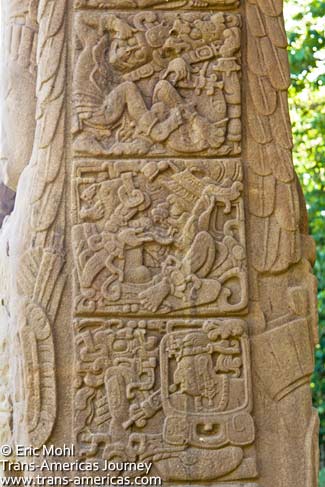 What the heck is a zoomorph?

As impressive as all those stele are, Quiriguá has other great big giant stone tricks up its sleeve. They’re called zoomorphs, which is a fancy word for multi-ton boulders carved to resemble fantastical beasts combining aspects of revered real-life animals, like jaguars and turtles and crocodiles, combined with made-up fantasy creatures. 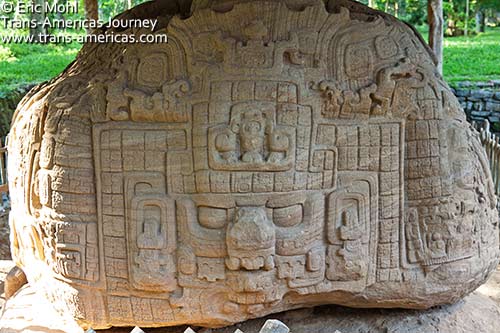 This is zoomorph B, a 13 foot (four meter) long boulder carved on all sides with intricate  depictions of a creature that is half crocodile, half fantasy animal. 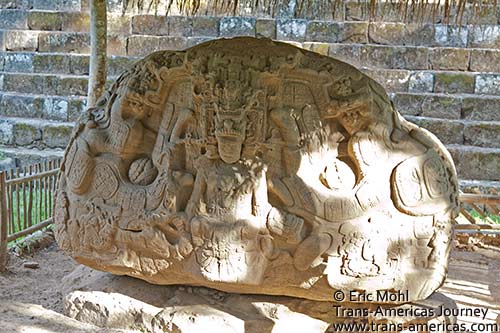 Though zoomorph B dates back to 780 AD, we could still see traces of original red pigment on it. 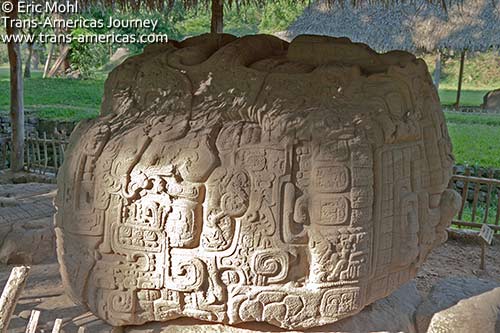 Zoomorph B, a multi-ton boulder carved on all sides with intricate depictions of a fantasy creature that is part crocodile, part who-knows-what.