James Beard award-winning chef Donald Link has done it again. Not content with three mainstay restaurants in New Orleans including Herbsaint, Cochon and Cochon Butcher or with his rock-solid reputation as a city supporter who puts his money where his mouth is (he opened his second restaurant, Cochon, six months after Katrina hit at a time when other local chefs were closing doors and firing staff), the chef has just added another delicious link in his pork-centric empire. 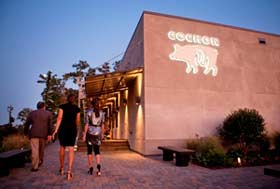 On September 15 Cochon Lafayette opened its doors in Lafayette, Louisiana about two hours from New Orleans. Two weeks later I had lunch there and I’m sorry I waited so long. 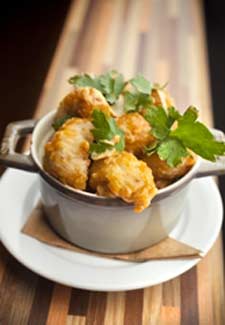 The kitchen is open, booths are plentiful and Cochon Lafayette also has a proper bar (not just a convivial holding area found in the city Cochon) featuring the usual suspects plus a roster of delicious moonshine-based cocktails.

Built on the banks of the lazy Vermillion River, Cochon Lafayette is currently finishing an outdoor dining area that might just be beautiful enough to lure you away from the smells inside.

It’s all designed to make it easy for you to enjoy. If that means overindulging, so be it. If that means snacking and sipping, no problem. I went the overindulge route, tasting more dishes than I care to admit in print. 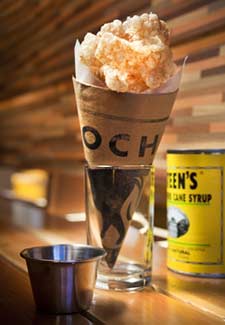 The Cochon Lafayette menu will be familiar to anyone who’s dined at the original Cochon (hey, it ain’t broke). Standouts included fried fish collars (which the waitress insisted on calling “fish collards”) with chili vinegar ($6) which were surprisingly meaty. The sweet-hot-tangy chili vinegar should be bottled and sold as an at-home condiment.  Braised pork cheeks with spoon bread and soybeans  ($11) were tender, smoky and pleasingly light thanks to plentiful crushed herbs–best with a glass of red wine from the restaurants extensive list ($25 to $95 plus ample half bottle and by the glass options).

The boucherie plate ($14) includes slices of familiar house-cured meats like salami but trust me when I tell you it’s the head cheese and gooey potted pork belly that will blow your mind.

Rare missteps included the smoked pork ribs with pickled watermelon ($11) which suffered from too much sauce which drowned the succulent, tender ribs. The oyster and bacon sandwich ($14) was an interesting take on a gourmet po’boy but the bacon was too thin and docile to stand up to the oysters.

It’s not on the menu, but don’t leave before you’ve seen the epic, cheeky, porky painting in the men’s room. Deemed too racy for the dining rooms, the picture is classic chef Link (send someone in with a camera if you must).

Our review of this restaurant was originally published by iTraveliShop