City Travel Guide: Where to Eat and Drink in Quito, Ecuador

In recent years the cuisine scene in Quito has improved by leaps and bounds. Now travelers to Ecuador’s capital city can find gourmet guinea pig, super sandwiches, inventive fusion, outstanding seafood, a great burger, craft beer, and even dinner on a bus. Here are our favorite bars and restaurants in Quito to ensure you eat and drink well when visiting this UNESCO World Heritage site city. 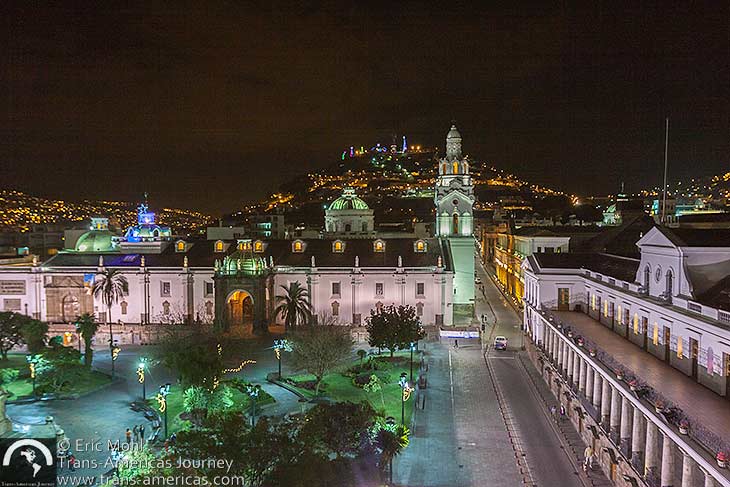 The dining scene in Quito, Ecuador is surprisingly diverse.

The number of ambitious fine dining restaurants in Quito continues to grow. Here are a few of our favorites.

You may be surprised to learn that there is a Relais & Chateaux recognized restaurant in Quito, but there is. It’s called Zazu and it’s established itself as a fine dining destination in the city. The space is sophisticated with subdued lighting and a chic palette of grey, white, and silver and the food is equally sophisticated. We had a seven-course tasting menu which started with an amuse bouche of house-made bread, including a delicate quinoa bread, and a glass of Spanish Cava. Standouts from the rest of the meal included a bite of black clam ceviche on a mini patacon (a disc of flattened and fried plantain) and tender Uruguayan lamb with quinoa. We did find the service a bit puzzling with dishes whizzing out to our table at breakneck speed and waiters looking at their cell phones in the dining room. 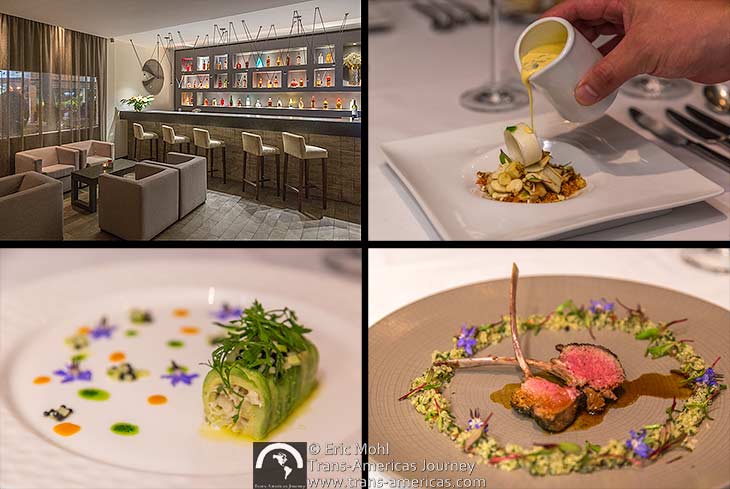 Just part of our tasting menu meal at Quito’s Zazu, the only Relais & Cheataux restaurant in Ecuador.

ZFood is a stylsh seafood-focused place from the same people behind Zazu. Opened in 2015, ZFood has indoor and outdoor seating, a fish market style display of the goods, and a beachy, clam shack esthetic with lots of natural light, simple wooden furniture painted white, and accents of sea blue. Staff t-shirts say “Nice to Sea You”. The place attracts a casual but clued-in crowd that appreciates the high quality of the seafood and fish. The 100% seafood (no fish) bouliabase we had was rich, fish and the ceviche, made tableside, was clean and refreshing. The place has a creative cocktail menu as well, including a fantastic combination of a seafood cocktail and a bloody Mary. 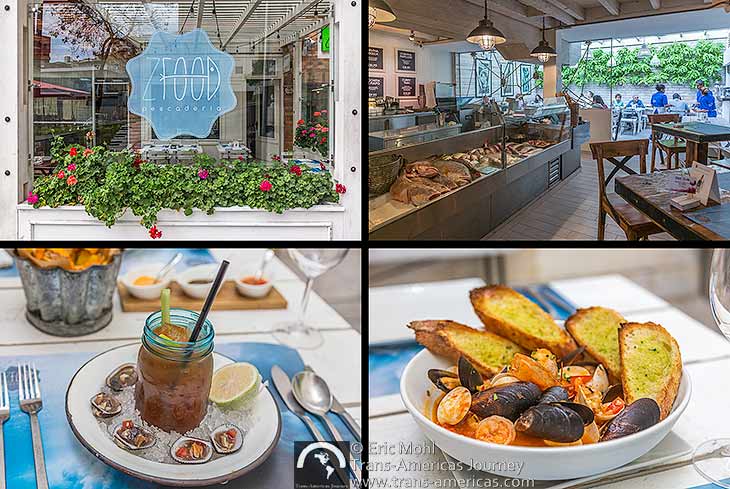 It’s all about seafood with style at ZFood.

Urko opened in 2014 on a mission to present Ecuadorean ingredients (the kitchen didn’t use olive oil when we were there because there’s none produced in Ecuador) to tell the story of cuisine across the country. The space is divided into different levels with a small bar and a la carte dining on the first level, a kitchen garden on the top level, and tasting menu dining on the second level. Each of the 12 courses on the tasting menu is inspired by iconic ingredients, techniques, and combinations from four regions of the country. Our tasting menu meal included a coastal dish of sea bass cooked sous-vide with housemade cilantro oil and a peanut-based sauce which should have made it like satay, but didn’t. From the north came pork aged for 45 days then slow cooked for 48 hours. Urko’s inspiration and goals are similar to those of Central in Lima, Peru but in a less famous, less manicured form which makes the experience more approachable. 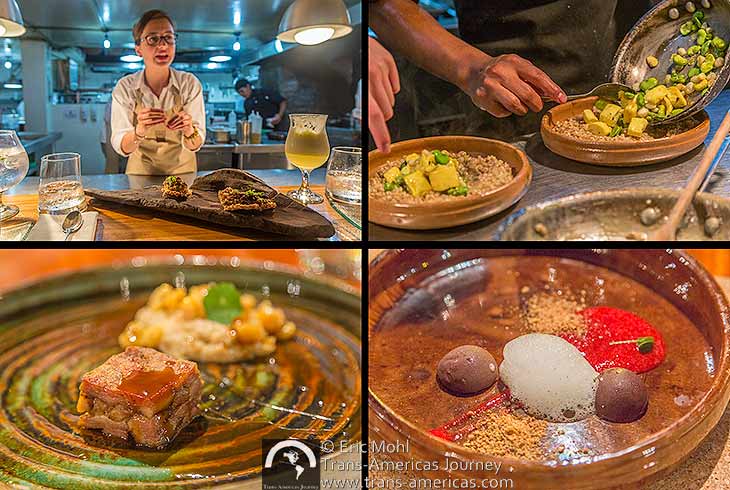 Urko uses exclusively Ecuadorean ingredients to take diners on a delicious ride through regional foods in the country.

La Gloria is not the most avant-garde restaurant in Quito. It is, however, a great place to try reliably well-prepared dishes you might not try elsewhere — like the restaurant’s gourmet take on cuy (guinea pig). Cuy is a beloved food in Ecuador and is usually served whole after being cooked on a wooden stick over an open fire. At La Gloria just the legs of the cuy are fried, then finished in a pan. The presentation is elegant and the cuy is like a richer, smaller version of duck. We also love the restaurant’s well-stocked walk-in wine room where diners can choose their own bottles at retail rates. 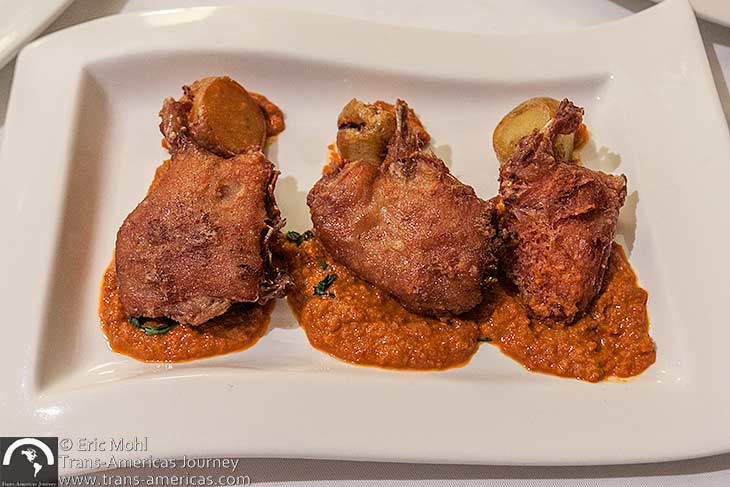 Cafe Dios no Muere is the domain of a New Orleans native named Matthew. He came to Ecuador in 2001 to farm coffee and cacao. He still has the farm but he eventually moved to Quito and opened his restaurant in a three level 400-year-old building in the historic center with a small outdoor patio area. Here he serves gumbo on Wednesdays and jambalaya on Thursdays, but it was his hamburgers that we kept coming back for. They’re juicy, well seasoned, and served with good mustard and fresh yucca fries (US$4). He also sells local craft beer and wine and he’s open until 10 pm which is a blessing in the center where it can be hard to find anything except full restaurant meals or tiny snacks after 6 pm. 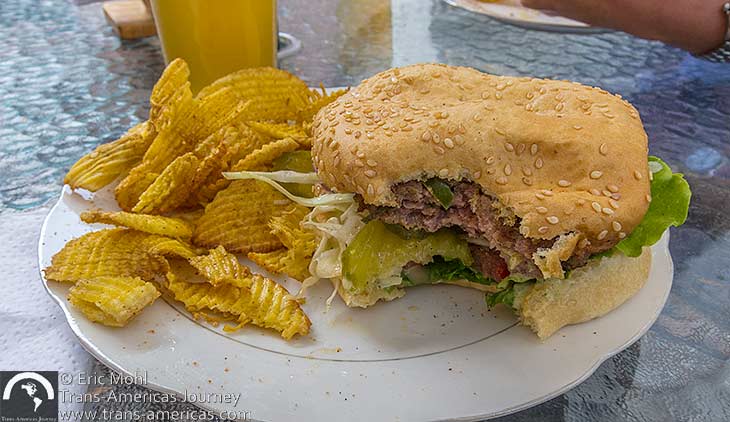 You can count on a solid burger at Cafe Dios no Muere.

On Plaza de la Independencia you’ll find a shop called Fabiolita which offers an array of outstanding made-to-order sandwiches. We’re partial to their pernil (pork leg) sandwich and don’t forget to ask for some of their hot sauce. This place is no secret, so be prepared to wait in line. 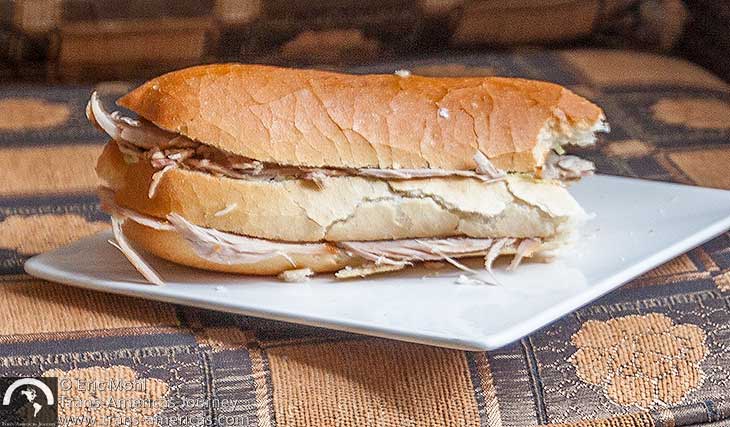 It may look humble, but this is our favorite pork sandwich in Quito.

Head to a stall called Corvina Don Jimmy in the Central Market (it’s on the send floor near the door, look for the sign) where about US$5 gets you a huge lunch including a small bowl of shrimp and conch ceviche and a big fried slice of fish on rice with potatoes and fresh chili sauce. 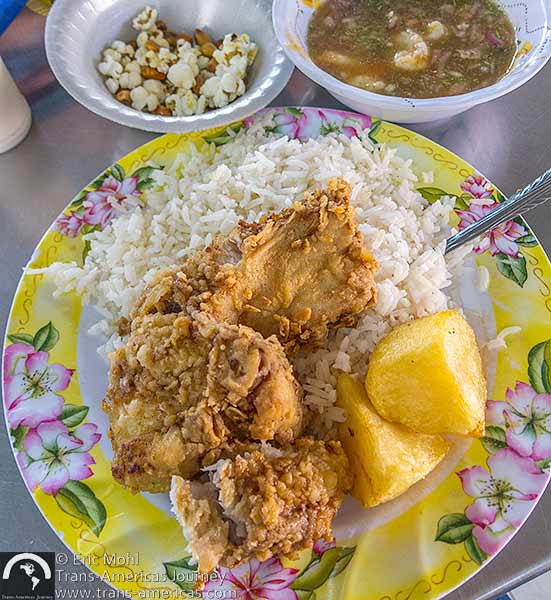 The weirdest way to eat in Quito

Casa 1028 Restaurant Movil is, by far, the most unusual way to eat in Quito. First, you get on a bus with an interior that’s been modified to accommodate tables and chairs.  Then the bus takes off for a tour of a few sights in the city center (including the San Francisco Church and the city’s Gothic Basilica). While on the bus you’re served Ecuadorean snacks including mini pernil (pork leg) sandwiches and green plantain empanadas stuffed with cheese. While off the bus your guide shares facts about each stop. 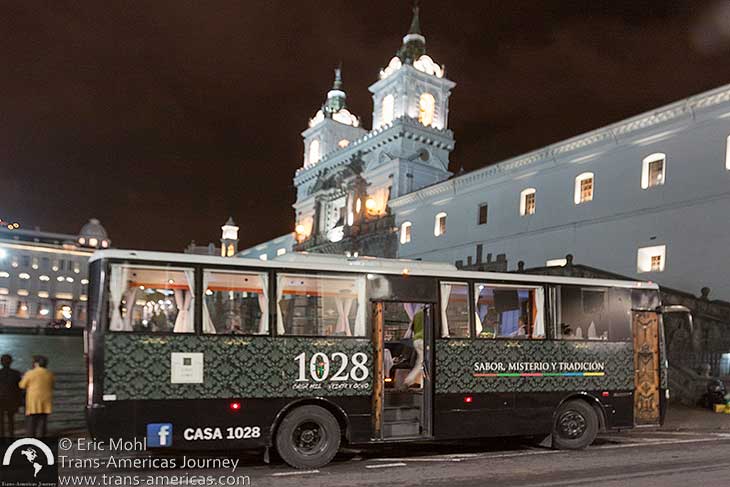 Dinner on the move in Quito.

Where to drink in Quito

A group of friends and beer lovers from the US opened Bandido Brewing Pub and Brewery in Quito in 2013. They now produce a solid range of small-batch UUS-style craft beers including and IPA, a pale ale, an amber, and a stout. They also turn out solid pub food and attract both locals and travelers. 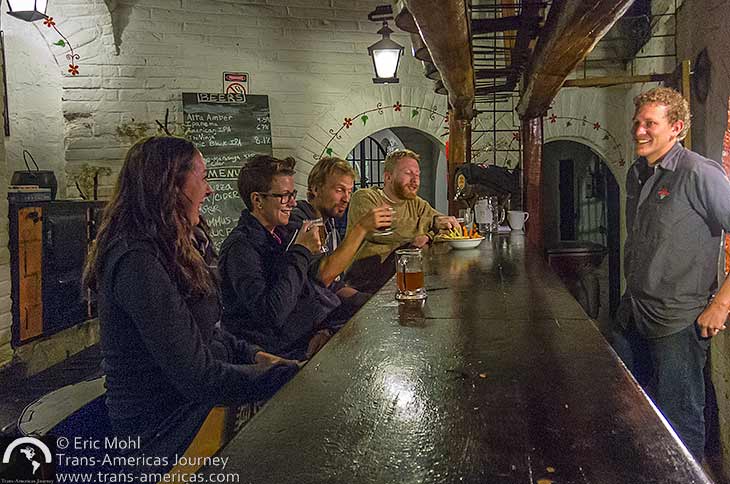 In one of the niches below the San Francisco Church, you’ll find a sprawling shop and cafe called Tianguis. This is the place to go for a cup of hot chocolate served with Andean cheese just like Ecuadoreans like it. 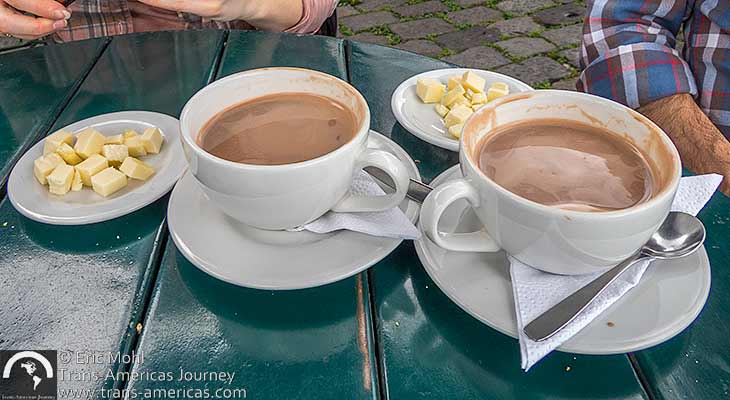 This cafe on Plaza San Francisco is the place to go to taste an Ecuadorean favorite: hot chocolate and cheese.

A rosero Quitaño is a fruit-based cocktail that dates back to the 17th century. It’s made from a base of water infused with lemongrass, cinnamon, pineapple rind, clove, and panela. This base is enriched with finely chopped cooked mote (a type of corn) and finely chopped babaco (a less pushy type of papaya), strawberries, pineapple, and other tropical fruits. Original versions included a fermented corn beverage but modern versions are often spiked with white wine and served with a spoon – like an adult fruit salad. It’s not easy to find a traditional take on the rosero Quitaño, but the bar at the Hotel Plaza Grande on Plaza de la Independencia does a lovely version in a lovely setting. 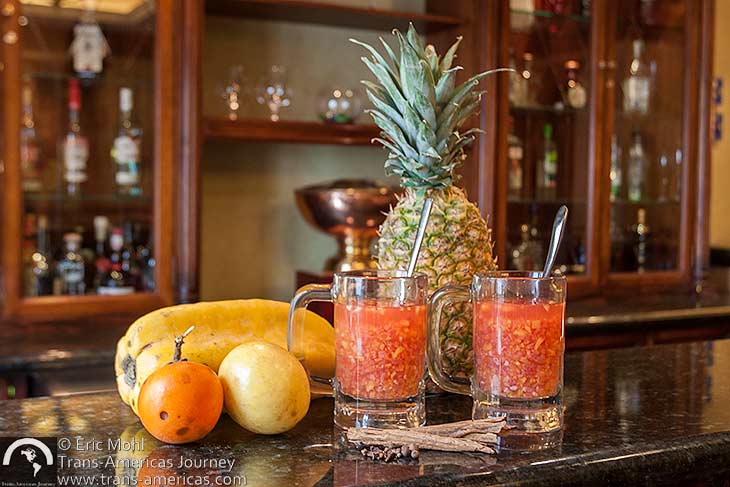 It’s not easy to find, but this is one of the oldest and most traditional cocktails in Quito.

The official currency of Ecuador is the US dollar.

If you’re arriving from lower elevations, be aware that the altitude in Quito may be a challenge at first. Walk slowly, drink a lot of water, and drink coca tea as well. It works.

The international airport in Quito, completed in 2013, is more pleasant than most but it is about 25 miles and 45 minutes from the center of the city.

Be on the lookout for issues of a locally produced magazine called Ñan. It’s reliably full of great information about travel in Quito and across Ecuador and it’s published in Spanish and in English.

A new subway system in Quito is currently predicted to be operational by July 2019.