After spending more than six months traveling in Costa Rica we can tell you that it takes some doing to feel like you’ve made it off the beaten path. We got that pleasant feeling, plus a shockingly blue river and a shockingly green lodge, when our road trip took us to Tenorio Volcano National Park. 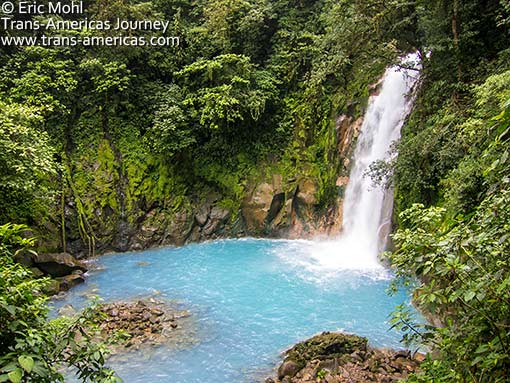 The Rio Celeste Waterfall in Tenorio National Park in Costa Rica is much more easily reached now thanks to a newly improved trail.

There are only three hiking trails in Tenorio Volcano National Park (US$10 per person) and one of them requires a guide. We were warned that the park’s trails are often a muddy, slippery mess since the place gets around 200 inches (5,000 millimeters) of rain every year. However, when we were in the park big trail improvements were under way, including a much needed set of stairs down the steep slope that leads to the base of the impressive Rio Celeste waterfall.

Though only one volcano made it into the park’s name, Tenorio Volcano National Park actually encompasses four different volcanic peaks. None of them are climbable unless you’re a researcher, but we didn’t come to see the volcanoes. We came to see what the volcanoes have done to the river.

To reach the river in question we hiked the 4 mile (6 km) round trip Sendero Misterio del Tenorio (Tenorio Mystery Trail) which climbed steadily but gently through the cloud forest. It really was one of the best short day hikes we did in Costa Rica with varied scenery, plenty of peace and quiet and, finally, that shocking blue river. 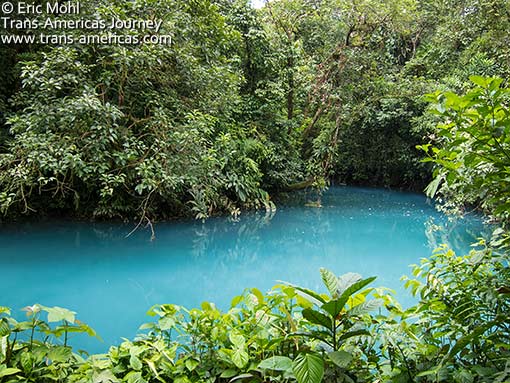 This is NOT photoshopped: the Rio Celeste, which runs through Tenorio National Park in Costa Rica, really, truly is that blue thanks to a unique cocktail of natural volcanic minerals.

Is the Rio Celeste the most beautiful river in Costa Rica?

The Rio Celeste (Sky Blue River) achieves a blue like we’ve never seen in any other body of water thanks to sulfur and calcium carbonates from the volcanoes. Picture a white Russian cocktail made with a splash of Blue Curacao (just picture it, don’t drink it) and you’re pretty darn close to the color of the Rio Celeste. 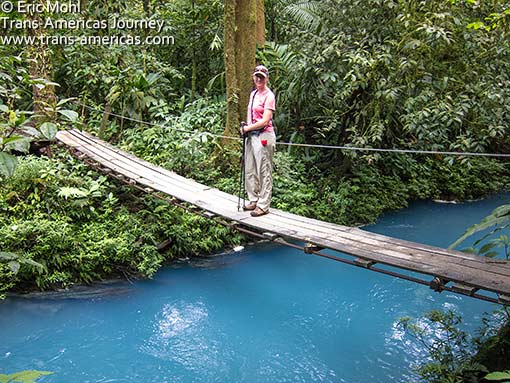 Karen on part of the trail to (and over) the shockingly blue Rio Celeste in Costa Rica’s Tenorio National Park.

We’ve seen eerily-hued crater lakes before but the color achieved in this river is even more surreal. Look at the Rio Celeste long enough and it does begin to resemble a ribbon of sky down here on earth. 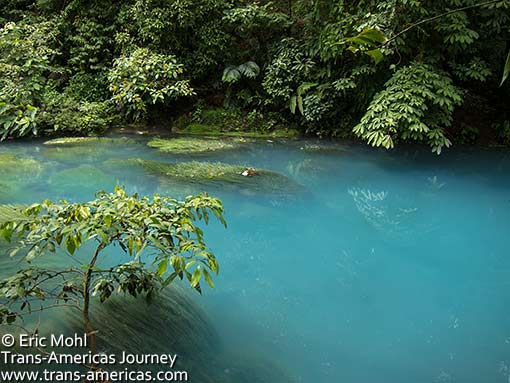 The Rio Celeste (Sky Blue River) lives up to its name in Tenorio National Park in Costa Rica.

At one point on the trail we reached a spot where two streams converged turning the water blue. The spot is called Los Tenideros or Borbollones and though it looks like magic, it’s really science that’s at work. 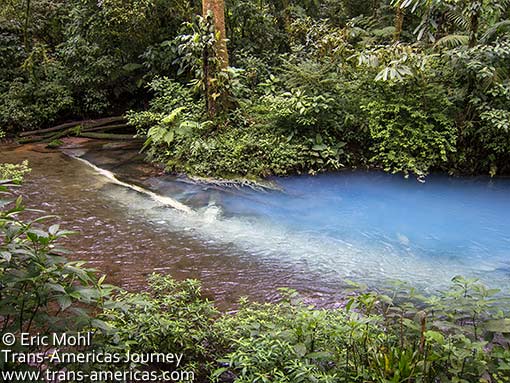 One stream contains sulfur from the volcanoes in the area, the other contains calcium carbonate. When those two streams mix, the substances create a natural reaction which  instantaneously transforms the water to a shockingly blue color. It was mesmerizing to watch and we really, really wanted to jump in for a swim in what just might be the most beautiful river in Costa Rica. Sadly, that’s not allowed.

You used to be able to swim in one specific natural hot spring within the park but now there are signs up all over the place making it clear that no one is allowed in the water anywhere in the park, presumably for safety reasons since many of the springs, like the one boiling away, below, are dangerously hot. 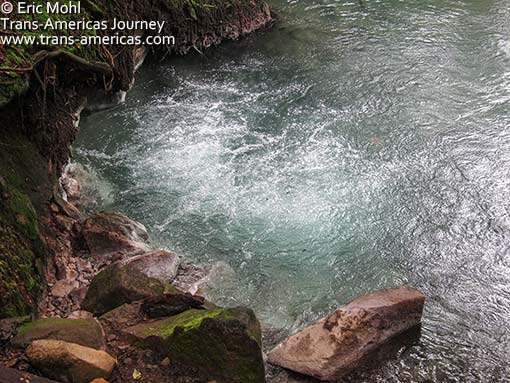 No swimming allowed: a natural hot spring, heated by nearby volcanoes, boils away in Tenorio National Park in Costa Rica.

Check out Tenorio Volcano National Park highlights, including the incredible mixing of streams to create that shockingly blue water, in our video, below.

We’ve noted before that Costa Rica is bursting with places to stay that call themselves eco or green and we’ve checked into many of them during our road trip. Some have earned the title (like Selva Bananito Eco Lodge & Preserve). Others, not so much.

Joel Marchal, the French creator of Celeste Mountain Lodge (from US$170 double including three gourmet meals a day, though specials and lower walk-in rates are sometimes available), has earned the right to fly the eco flag. 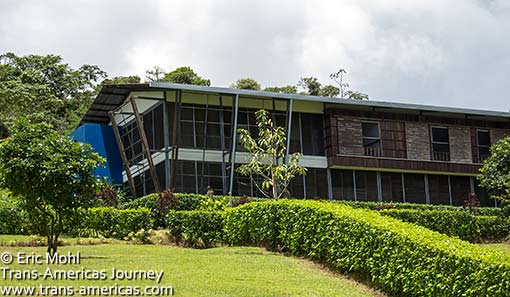 At first glance, Joel’s 18 room, two story lodge looks too modern, too high-concept to be eco with stark angles, shots of vivid color (lime green, cobalt blue, tangerine orange), and lots of open-air spaces that make the most of the views. It’s chic but is it eco chic? 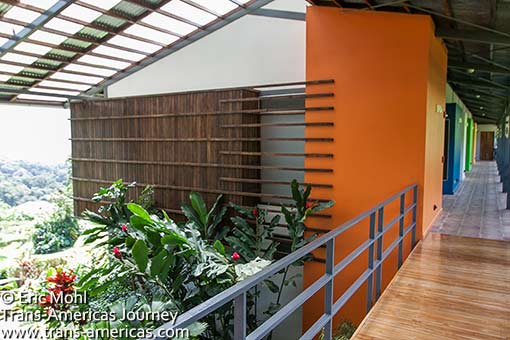 What you can’t see at a glance is that most of the materials used to construct the lodge were recycled or cast off, including an incredible number of old tires that have been given a new life (and kept off the burn pile). It was also built on stilts to limit its foot print and reduce the need to excavate. 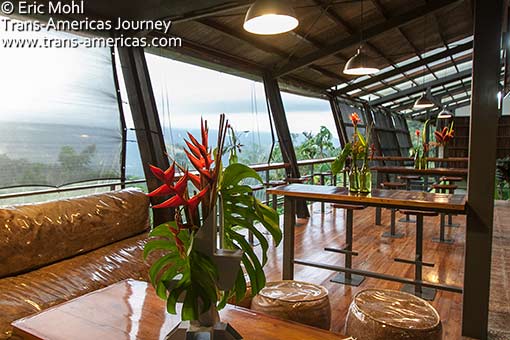 Inside, almost every clever and chic design element is also green. Fine coconut husk fibers fill clear plastic slip covers to create biodegradable bean bag style seating and ottomans. Bed side lamps are made from old corrugated sheet metal. The boxes they pack a to-go lunch in are made from recycled materials. Meals in the open-air restaurant are served on wooden cutting boards covered in a banana leaf which is simply composted when you’re done eating, eliminating the need to wash dozens of dishes. The hot tub is filled with rain water which is heated using a customized energy-saving gas-fueled system. 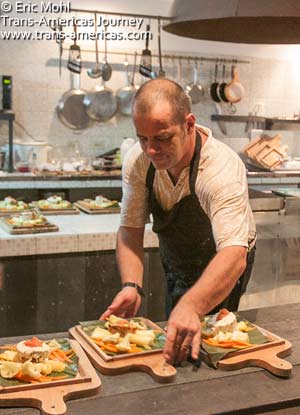 The chef at Celeste Mountain Lodge turns out gourmet farm to table meals (included in your rate). 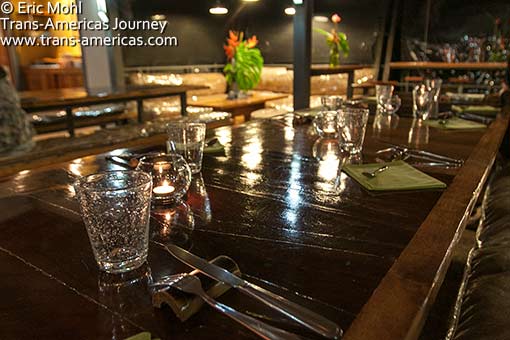 The elegant dining room at Celeste Mountain Lodge is the perfect setting for the lodge’s gourmet food.

Joel also created an innovative process when he built a small network of hiking trails through his cloud-forest-covered property which involves the use of a protective, flexible, durable material laid over the surface of the trail which limits erosion. Officials from Costa Rica’s national park system have considered adopting the process on park trails.

But don’t take our word for it. Shortly after it opened Celeste Mountain Lodge earned five green leaves, the highest level of eco certification that the government’s CST regulating body hands out. Then Joel began to feel constrained by what he felt were one-size-fits-all rules and goals of the CST and he opted out of the program.

His eco efforts, continue, however, with a big emphasis on educating guests and locals, especially children, about green issues. One of the most charming elements of Celeste Mountain Lodge (and the list is long) are the in-room eco messages to save water and turn off lights drawn by local school children. 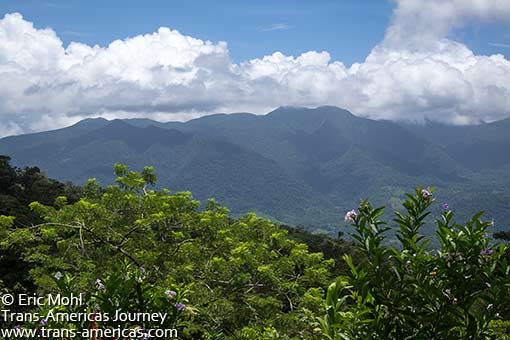 Though Tenorio National Park is still one of the least visited in Costa Rica, usage has been surging in recent years and we hear that the Costa Rican government is considering a proposal which would invest heavily in Tenorio Volcano National Park to add services and infrastructure including improved and expanded trails, a camping area (camping is currently prohibited), a welcome center, and more. If it goes well in Tenorio other national parks in Costa Rica could be similarly improved. Stay tuned.

Oh, and don’t be put off by what you might read about the road conditions to Tenorio Volcano National Park. Yes, it’s a rocky, bumpy dirt road but all but the lowest vehicles will do just fine as long as you take it slow. If you’re renting a car in Costa Rica you should always go for the 4X4 option anyway precisely for access to places like this.