The Rio Dulce area of Guatemala delivered a hot waterfall, pirate legacy, and birds on the ground.

Sweating it out in El Estor

El Estor used to be a bustling port town and trading post which was a hub of commerce and home to a large store. The story goes that the town became known as “the store” which local Spanish speakers called “El Estor.” Get it?

Today not much happens in El Estor except sweating. We spent one of the hottest nights on the entire Journey in El Estor at the Vista del Lago hotel. The hotel is in a building which is believed to have been the original 1815 site of the store which gave the town its cockamamie name. All we know for sure is that our tiny room in the two story wooden building was so airless that we spent most of the night pacing the wide wrap-around porch trying to catch a breeze off Lake Izabal. Except there wasn’t any breeze.

El Estor is not a tourist town. It’s not trying to be a city. It’s not an indigenous community. It’s just a town–one of the few “normal” towns we saw in Guatemala. Totally unspectacular, but noteworthy for that fact.

This unusual waterfall at Finca El Paraíso, near El Estor in Guatemala, is fed by a hot spring.

The next morning we escaped the heat by getting into a hot spring. Ridiculous as that sounds, this was no run-of-the-mill hot spring. Finca Paraiso, about a 15 minute drive (on pavement) outside of El Estor, has a waterfall fed by hot springs on its property. For 10Q per person (about US$1.25) the owners let people walk along a short path and hang out in their wacky waterfall.

The hot spring is located above the waterfall, so the tumbling water is very, very hot. When it dumps into the cold river flowing below it the combo creates a kind of fast-moving bathtub. It was a unique experience which would have been more enjoyable if the air temperature wasn’t already in the 90s. 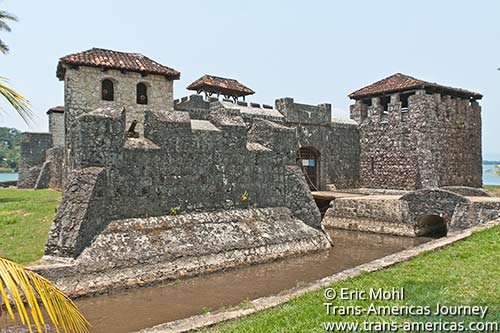 Spanish conquistadors built the Castillo San Felipe de Lara on a narrow section of the Rio Dulce as a defense against pirates.

After leaving Finca Paraiso it only took about 45 minutes to reach the Rio Dulce (Sweet River in English) and surrounding towns.

We made a pit stop at Castillo San Felipe de Lara which was built by the Spanish in 1652 on a narrow stretch of the Rio Dulce where the river enters Lake Izabal as an anti-pirate fort. 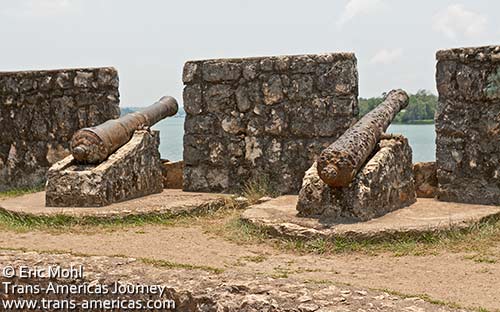 Some of the original canons at Castillo San Felipe de Lara on the Rio Dulce in Guatemala.

After the pirates disappeared the stone structure was used as a prison. Today, the fort, which is set amidst a grassy park on a bit of land that juts out into the river, is open for tours. If you like canons and thick walls and pirates (who doesn’t?) it’s a peaceful stop. Bring a picnic. There are covered tables and even a small swimming area. 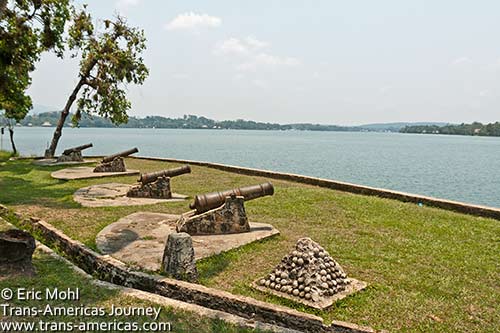 Some of the original canons at Castillo San Felipe de Lara, guarding against pirates along a narrow passage on the Rio Dulce. 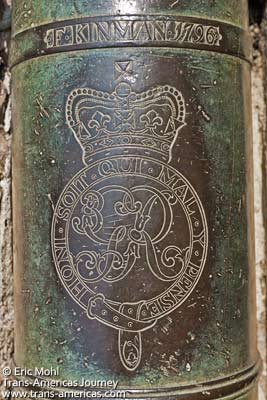 Original engraving from 1769 on a canon installed in the Spanish-built Castillo San Felipe de Lara fort in Guatemala.

Then it was on to the town of Rio Dulce (sometimes still referred to as Fronteras) and Hacienda Tijax Jungle Lodge & Marina. Built at the edge of Lake Izabal, which is fed by the Rio Dulce, Hacienda Tijax is part of a 500 acre (200 hectare) parcel of land which includes cattle pastures, stands of rubber trees, and wild jungle which the owners are working to preserve through the Hacienda Tijax Project.

The place has been in the Gobbatina family for years and now energetic, creative Adrianna Gobbatina is in charge of the rambling spread and she kindly invited us to stay and check it out for two days. Hacienda Tijax is accessible by boat or by car. We drove there (of course) and got from the parking lot to the hotel via a dramatic elevated walkway through the jungle and over the mangroves.

Hacienda Tijax offers a wide range of distinctive rooms (US$21 to US$121). Our cushy “cabin plus” (private bathroom, A/C) was an oddly angled mostly concrete structure. There are also wooden cabins and a couple of multi-bed houses with kitchens (though the food in the on-site restaurant is good too). Sadly, the water in the pool was a creepy shade of green when we were there, so we never got in. 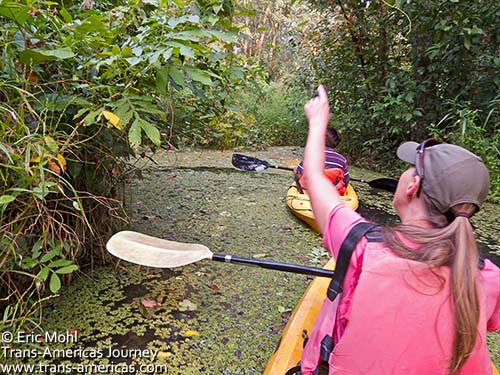 Karen checking out the howler monkeys during an early morning kayak trip through mangrove areas that feed into the Rio Dulce and, ultimately, Lake Izabal in Guatemala.

Hacienda Tijax offers trips into the rainforest and waterways around the lodge as well. We opted for an early morning kayak trip up river then into mangrovey offshoots where we saw howler monkeys and some of the 300+ species of birds that live in or migrate through the area. It was just a very peaceful way to start the day. 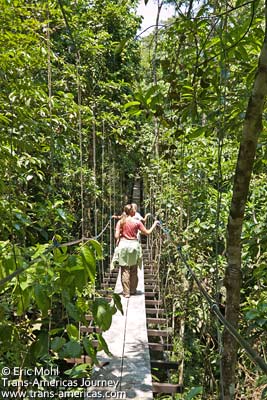 After breakfast Emilio guided us across a 200 foot (60 meter) long hanging bridge and through the Rainforest Sky Trail on the lodge’s property. The walk included a visit to a weirdly empty stone tower (which they call the Shaman Tower for reasons that were never quite clear), a stand of rubber trees, and a chunk of primary rainforest. Emilio, who has spent years collecting the seeds of indigenous plants to create a seed bank to preserve local species, was a wealth of information about the jungle’s medicinal plants. Near the end of our walk we also saw a nightjar on the ground just a few inches from the trail. 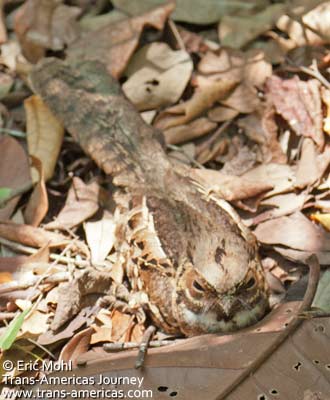 Look closely. Can you see the nightjar nesting on the ground?

Nightjars spend a lot of time on the ground. They nest there and we often see them feeding on insects on dirt roads in the evenings. They blend in incredibly well and they’re often invisible until you’re right upon them–then they burst into flight in a way that’s so unexpected and jarring that it usually startles the wits out of us. We think that’s why they’re called “nightjars.” 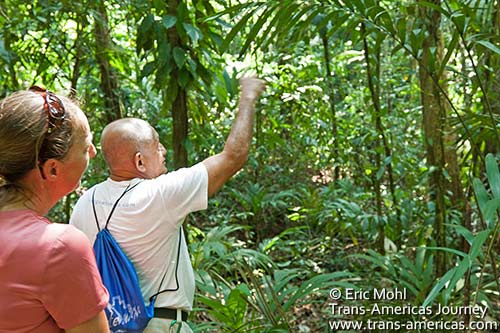 Emilio telling us all about medicinal jungle plants during a walking tour through some of the 500 acres (200 hectares) owned by Hacienda Tijax in Rio Dulce, Guatemala.