The whole southeastern chunk of Nicaragua is set for rising tourism. A fantastic new road has greatly reduced the drive/bus time from Managua to San Carlos on the banks of the Rio San Juan, there’s now better boat trip service to El Castillo, and a new airport in Greytown makes reaching that far-flung southern destination easier than ever. No more excuses. Here’s our travel guide to Rio San Juan, San Carlos town, and river trips to the historic El Castillo fort. 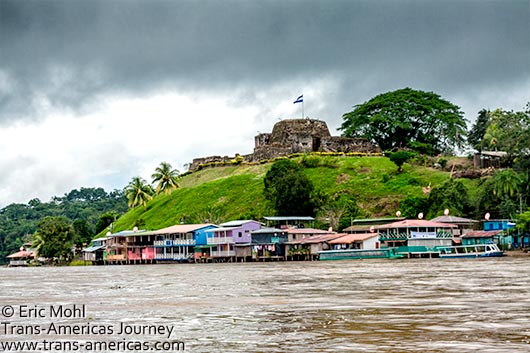 El Castillo fort above the Rio San Juan was built by the Spanish to help keep pirates from navigating the river to Granada where they stored their gold.

Getting to San Carlos and the Rio San Juan, Nicaragua

Forget what you’ve read about the hellish journey required to reach the town of San Carlos, gateway to the Rio San Juan region in southern Nicaragua. A new amazing paved road now whisks you from Managua to San Carlos in about four hours. For much of the drive we had the wide, smooth road all to ourselves and conditions were so good we even used the cruise control for a bit, something that is generally impossible on crumbling Central American “highways”.

The road was built in anticipation of increased traffic to a new, more direct border crossing between Nicaragua and Costa Rica following the construction of the Santa Fe bridge across the Rio San Juan. The bridge, which is four lanes wide, 1,187 feet (362 meters) long, 131 feet (40 meters) high, and was built by the Japanese at a cost of US$30 million, is now finished. However, the bridge and the border remain closed due to bad relations between Nicaragua and Costa Rica. Stay tuned… 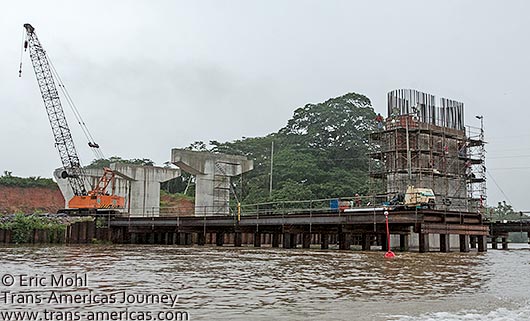 Construction of a US$30 million dollar bridge across the Rio San Juan to create a new border crossing between Nicaragua and Costa Rica. The bridge is now completed but the border remains closed.

Where to sleep in San Carlos

San Carlos is a typical river town–dirty, slow, and unavoidable. It smelled a bit like fish, stale river water, and boredom. Everybody seemed to have a dearth of free time. We looked at a few accommodations in San Carlos and quickly realized that Hotel Cabinas Leyko was the budget hotel choice for us. For US$25 we got a private double room with a bathroom, Wi-Fi, and parking which is key for us. The hotel even let us leave our truck in their lot while we took a boat trip on the Rio San Juan to spend a night in El Castillo. 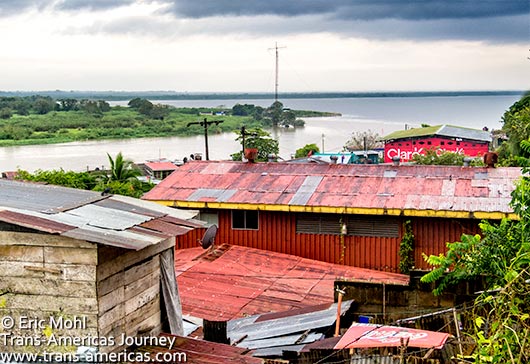 San Carlos on the Rio San Juan is a typical river town– dirty, slow, and unavoidable.

Boat trip on the Rio San Juan to El Castillo

There are two ways to get from San Carlos to the small riverside town of El Castillo: slow boat and fast boat. We chose the slow boat (US$4 per person each way) which was a clean, basic, motorized boat with a roof and seating. Fast boats, which do the trip in about half the time, are US$11 per person each way. 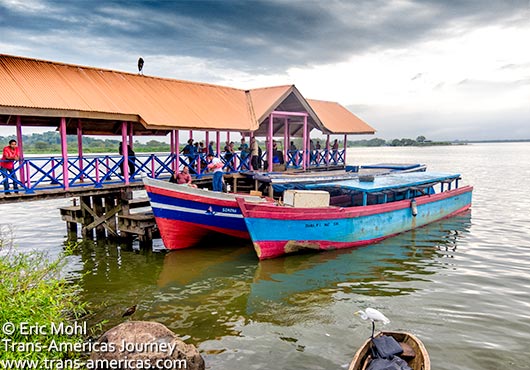 This is how you’ll travel on the Rio San Juan between San Carlos and El Castillo.

Our slow boat was full but not packed and the four-hour journey on the Rio San Juan was pleasant and even included some animal sightings (kingfishers, osprey, howler monkeys, egrets). We made a handful of stops to pick up or drop off passengers at riverbank docks serving the handful of people who live along the river.

The Rio San Juan is sometimes called El Desaguadero (The Drain) because its 120 mile (192 km) length drains Lake Nicaragua into the Caribbean. 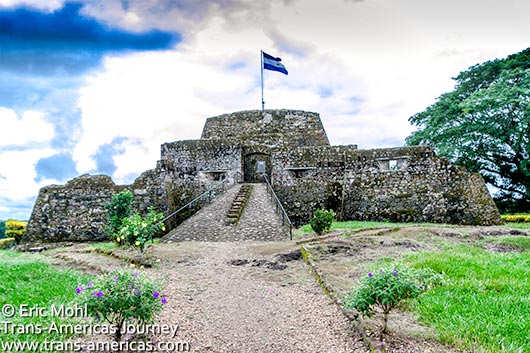 The El Castillo fort was recently refurbished by the Spanish, who built it in the first place.

The town of El Castillo, only accessible by river, almost feels like an island town–small, contained, and protective. Or maybe that’s just the vibe coming off the demurely-named Fortress of the Immaculate Conception (aka the El Castillo  Fort), which is the one and main attraction in town.

The hulking stone fort overlooks the Rio San Juan and was completed by the Spanish in 1675 as part of a string of forts meant to stop pirates from navigating the river to Granada. Since 1995 the fort, also called the Fort of the Immaculate Conception, has been on a tentative list for consideration as a UNESCO World Heritage site. 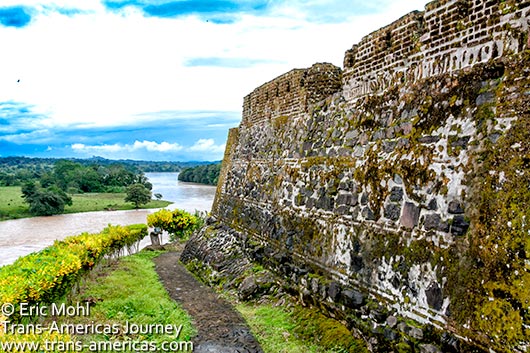 The Rio San Juan snakes past the formidable El Castillo fort, aka the Fort of the Immaculate Concpetion.

The fort (US$1.75 per person), nicely rebuilt by the Spanish to celebrate the 500th anniversary of the Spanish conquest of the Americas, includes a tidy little museum where a guide informed us that “The bravery does not depend on the sex” as he was explaining how the daughter of a Spaniard managed to defend an attack on the fort after her father was killed during the battle. Sex-based bravery aside, the fort was a great place to wander around near dusk with good views of the river. We had the place to ourselves. 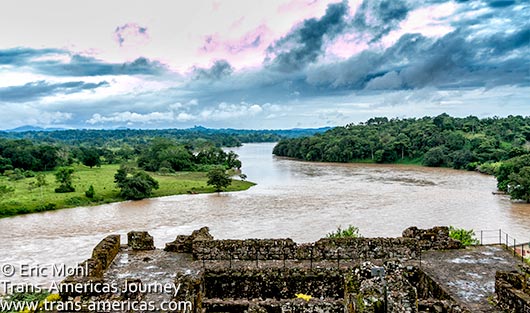 The El Castillo fort overlooks treacherous rapids in the Rio San Juan which the Spanish hoped would slow pirate ships long enough for cannons to take them out.

As impressive as the fort is the Raudal del Diablo (Devil Torrent) rapids which rage away directly below it. That’s no accident. The fort was placed in this spot precisely because of the rapids which represented a natural barrier which forced pirate ships to slow down and navigate carefully at this notorious spot in the river giving the Spaniards a fighting chance to pick them off from above. 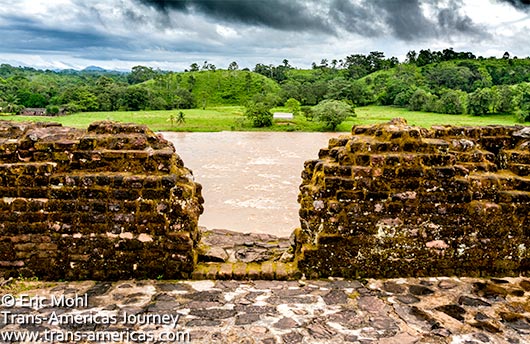 The Devil Torrent rapids as seen from the El Castillo fort. 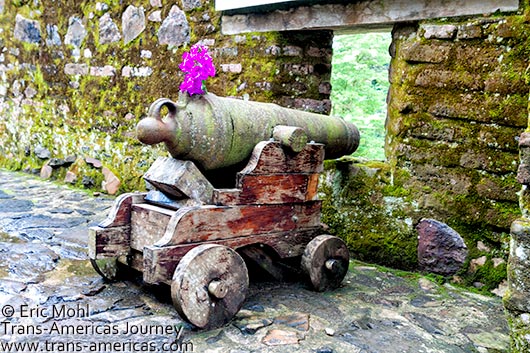 We swear that flower was in that cannon when we got there.

Sleeping and eating in El Castillo

El Castillo is a tiny town but there are a surprising number of hotels and a handful of eateries to choose from. We intended to stay in the Hotel Albergue el Castillo directly behind the fort. Our Lonely Planet described the place as feeling like a Swiss chalet, however, the room we were shown felt more like  a stall so we moved on.

We finally chose Hotel Victoria where US$25 got us a spotless (if small) private double with bathroom and full breakfast. A torrential downpour arrived as we were checking in so we retreated to hammocks on the covered patio of the riverfront hotel and listened to the water flow and fall. We were not alone. Colorful birds darted between leafy tree hideouts to nearby platforms which the hotel’s perky owner kept stocked with tempting fruit. 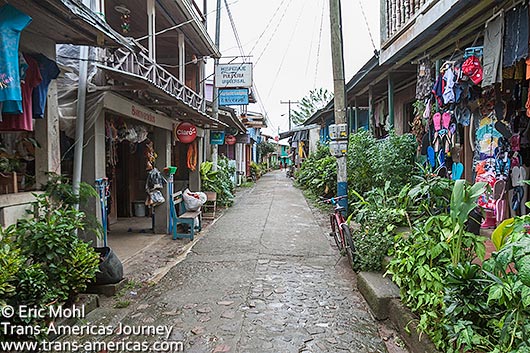 Main street in El Castillo town which is only accessible by river and has no cars.

When the rain finally let up we reluctantly hauled ourselves out of the hammocks and found Border’s Coffee. Owner Yamil Obregón is a young and talented Nicaraguan chef. He’s also a gay man and, he told us, had to fight the government for his right to open the place. We enjoyed perfectly cooked (from scratch) shrimp over pasta (US$7.50), terrific fresh fruit juices with no ice or sugar, and wonderful organic Nicaraguan coffee made using real espresso machines.

Unfortunately, Border’s Coffee was not open early enough to get another one of those coffees before our very early morning boat ride back to San Carlos. 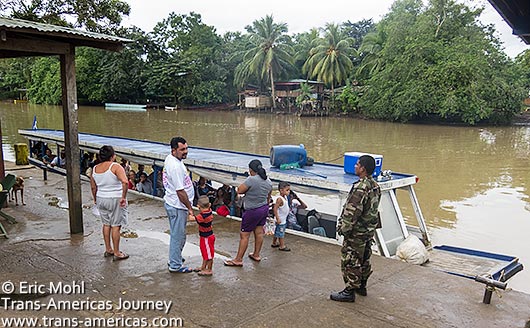 Waiting for our river boat back to San Carlos.