We began 2020 at the “End of the World” in Ushuaia, Argentina and continued our exploration of the Patagonia region of Argentina and Chile from there. This vast, remote, and beautiful area is filled with national parks, mountains, glaciers, more national parks, fjords, and wildlife which kept us extremely busy and active. In addition to this jam-packed exploration schedule, we had very limited internet so we weren’t able to keep up with our monthly “Where We’ve Been” road trip posts. But don’t worry. We’ll catch you up here by covering January and February 2020 in this post. BONUS: We arrived in the Uco Valley near Mendoza, Argentina on March 10 to house sit and lay low during the Covid-19 (coronavirus) pandemic which means we won’t be doing any real travel for the next 1-2 months. So we’re also including the month of March in this post. 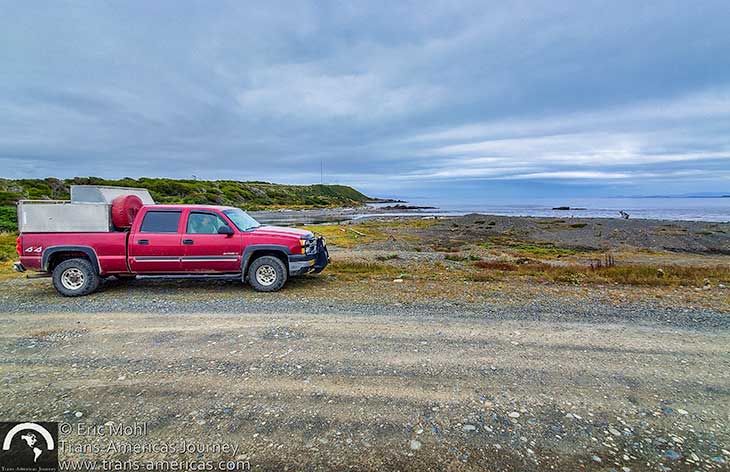 Our truck at the end of Route J in Tierra del Fuego, Argentina-the southernmost point you can drive to that’s connected to a national highway system.

During the first 10 weeks of 2020, we drove 4,653 miles (7,488 km) and crossed the border between Argentina and Chile four times to continue exploring the Tierra del Fuego and Patagonia regions of both countries. Here are the highlights, and don’t miss our custom map and dashcam time-lapse video at the end of this post.

Ushuaia may be the southernmost city in the world, but the road continues even further south. We had to get there, so we drove 80 miles (130 km) east of Ushuaia to the end of a dirt highway called Route J to the southernmost point you can drive to on a road that is connected to a national highway system. This was our first destination of 2020. More than 13 years after driving as close as possible to the Arctic Ocean in Deadhorse, Alaska (the northernmost point you can drive to in North America), we reached the southernmost point in South America. Even though these two extremes of the Americas are only separated by 9,530 miles (15,337 km) as the crow flies, we managed to drive 193,446‬ miles (311,321 km) between the two. After reaching the end of Route J, we visited the nearby historic Estancia Harberton which is the homestead of Lucas Bridges and his family members who were the first Europeans to settle in Tierra del Fuego. 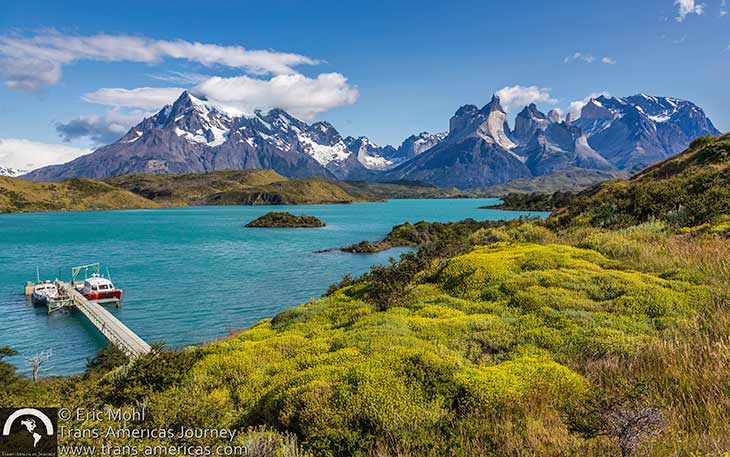 The beauty of Torres del Paine National Park in Chile.

We then crossed over to the Chilean side of Tierra del Fuego, via Paso Rio Bellavista, one of the smallest borders we’ve crossed to date. Our exploration of Chilean Tierra del Fuego, an area that must be one of the least populated areas in the Americas, included a visit to Parque Pingüino Rey, the only king Penguin colony not located on an island. Then we crossed the Strait of Magellan via the same ferry we took back in December when we arrived in Tierra del Fuego. After a brief visit to Punta Arenas, the regional Chilean capital of Tierra del Fuego and Magellanes, we continued to Puerto Natales to hop on a 4-day glacier cruise with a company called Skorpios which took us through the fjords around the Southern Patagonian Ice field. 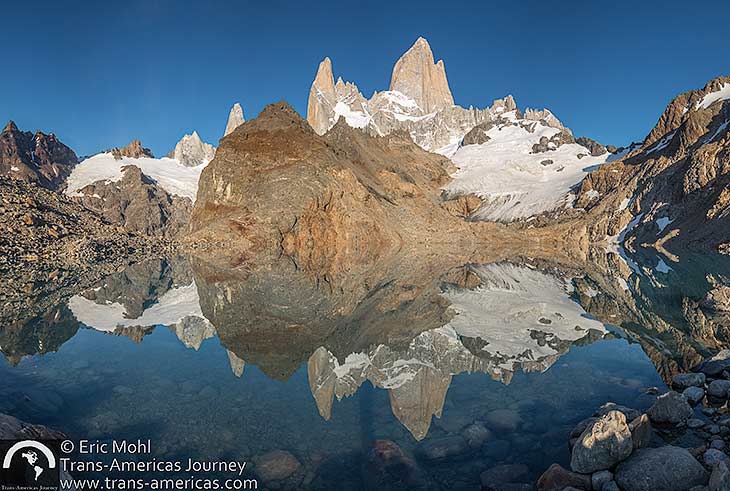 Then it was off to one of the most iconic destinations in Southern Patagonia: Torres del Paine National Park. Here we hiked dozens of miles covering the famous W-circuit around the Paine massif, saw stunning glacial lakes and glaciers, rode horses, and encountered two young pumas on a pre-dawn drive. We ended the month by crossing back into Argentina and visiting the town of El Calafate.

We started February 2020 by visiting Argentina’s famous and massive Perito Moreno Glacier in Los Glaciares National Park, then drove to El Chalten which is the gateway town for the northern end of Los Glaciares National Park. The center of attention here is Mount Fitzroy and the hikes around it. After a  lot more hiking and camping, we traveled north to Perito Moreno National Park for more hiking. But there’s no rest for the weary Patagonian traveler because further north is the newly created Patagonia National Park. This massive park, which exists in Argentina and in Chile, was created by lands donated by the Tompkins Conservation Trust which was founded by the late Doug Tompkins (founder of  The North Face) and his wife Kris Tompkins (former CEO of Patagonia). 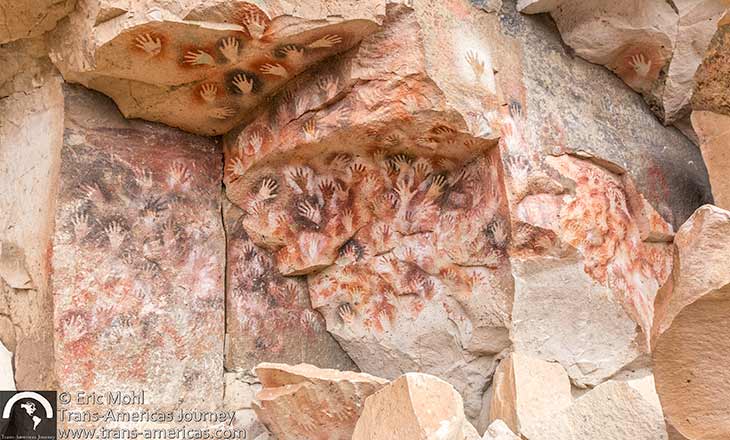 The highlight in this area is a UNESCO World Heritage Site called Cueva de las Manos. This archaeological site has hundreds of 4,000+-year-old handprints and a few other drawings that are in amazing condition and in a spectacular location. To top it all off, we saw our fourth puma in Patagonia on our way back from Cueva de las Manos to the La Posta de los Toldos guesthouse. Yet again it was time for another border crossing as we returned to Chile to bounce and rattle our way up it’s famed (and famously rough) Carretera Austral (Southern Highway). But first we took a thrilling jet boat ride to reach Leones Glacier in Laguna San Rafael National Park. Then we took another boat to visit the Marble Caves on General Carrera Lake. After these explorations, we drove on to Puerto Chacabuco so we could take yet another boat trip through the fjords to visit the San Rafael Glacier in Laguna San Rafael National Park. 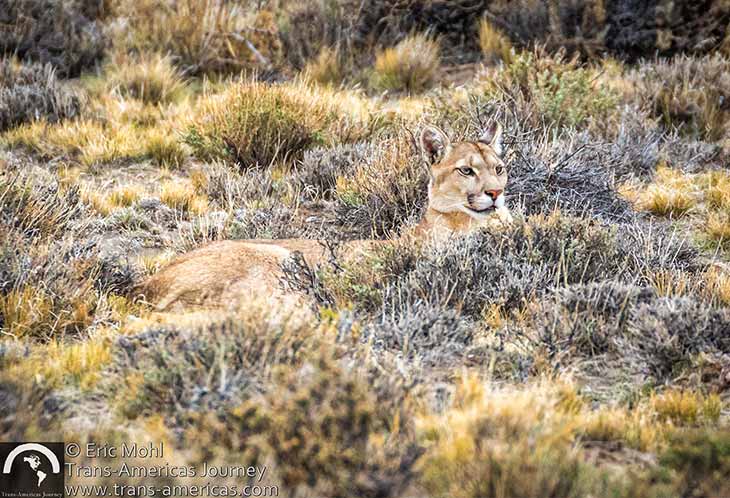 This little lady, near the dirt road between Cueva de las Manos and the La Posta de los Toldos guesthouse in Patagonia National park in Argentina, was the fourth puma we saw during our time in Patagonia.

At this point, we had to rush since we had a commitment to look after a friend’s house in the Uco Valley near Mendoza, Argentina more than 1,200 miles (1,900 km) to the north. So we started the month of March 2020 with (say it with us) another border crossing as we returned to Argentina. This was the 79th border crossing of our road trip and it happened on the 13th anniversary of our Trans-Americas Journey. Our first stop on the Argentina side was the Casa Yague vineyard and winery near the town of Trevelin. Then we hightailed it up to Mendoza with a stop at the Copahue hot springs high in the Andes. Now we’re settled into Mendoza wine country where we will stay through the first part of April…unless a Covid-19 (coronavirus) lockdown keeps us here longer.

Our complete road trip driving route covering January, February, and March 2020 through the Tierra del Fuego and Patagonia regions of Argentina and Chile can be seen in our map, below:

And you can see what we saw out there on the road in Argentina and Chile in February 2020 in our dashcam drive-lapse video, below. It was, as always, shot by our Brinno camera which is attached to our dashboard at all times.