We believe there absolutely was a time when Roatán Island, part of a collection of islands in Honduras called the Bay Islands, was a paradise of white sand beaches, laid back locals, pristine waters, and affordable prices. Sadly, those days are over as we found out. It’s all in our Roatán Island travel guide. 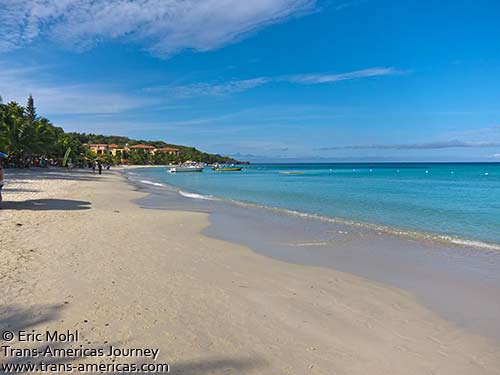 The white sand beaches of Roatán Island in Honduras are at risk from all-inclusive resorts and increasing numbers of cruise ship passengers.

Of course, getting to any island is part of the adventure. But when your transport is nicknamed the “vomit comet,” requires a pass through a metal detector, and costs US$28 per person each way (plus US$6 a day for parking if you leave a vehicle behind like we did), it’s not necessarily a good adventure.

And that nickname? Not for nothing. The waters between the ferry station in the dingy town of La Ceiba on the island of Roatán can get choppy and the ferry is fast and essentially just blasts through the swells. We have strong stomachs for the most part, but other passengers were doing plenty of up-chucking on our one and a half-hour ride to the island.

The crew is prepared, however. Air freshener is sprayed like crazy and there’s a constantly circulating gang of workers toting garbage bags, handing out fresh puke bags, and urging the sick to go buy a tummy-settling soda at the on board refreshment stand. We dubbed them the Puke Patrol.

Or you could fly.

Selling your soul to the cruise ship companies

The second thing we saw was the mini-city that Carnival finished in 2010. Built right at the port it seems purpose-made to disgorge and sequester cruise ship passengers–and there are hundreds of thousands of them and increasing every year. 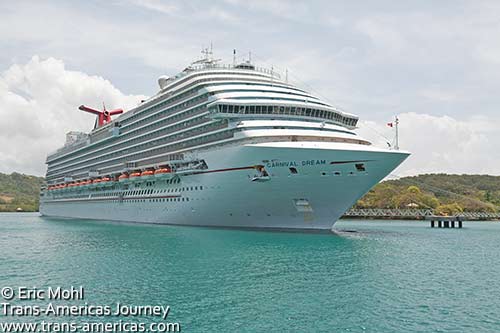 The Carnival Dream cruise ship dwarfs Roatán Island in Honduras. More than a million cruise ship passengers are expected on the island this year.

Many of the passengers pass through Cruise Shiplandia–aka Mahogany Bay, a US$63 million complex/staging area. From there they can get on the so-called “magic flying chair” (a chair lift that costs US$35 a pop) and travel to a man-made beach. Passengers can also choose to get on buses or other transport which whisks them to the zip lines, butterfly farms, and horseback riding operations they’ve paid to take part in for the day.

An entire section of the West End beach has been taken over by an enormous holding area for hundreds of white plastic beach loungers just waiting for cruise ship passengers who prefer suntan oil to adrenaline.

Though it’s estimated that 60,000 people live on Roatán you’d be hard-pressed to find many signs of non-touristy island life.

The West End of Roatán, where the aforementioned stretches of pristine white beaches used to beckon, is now built up shoulder-to-shoulder with resorts that range from fairly good to something less than mediocre. Many of them have gone the all-inclusive route complete with wrist bands and watered-down cocktails, like a mini Cancun.

There are still some bright spots underwater

At one point Roatán was well-known for its diving too. After being so disappointed with what was going on on dry land we were prepared to be disappointed underwater too but we still gratefully accepted invitations to go diving with two dive shops on the island so we could see for ourselves. 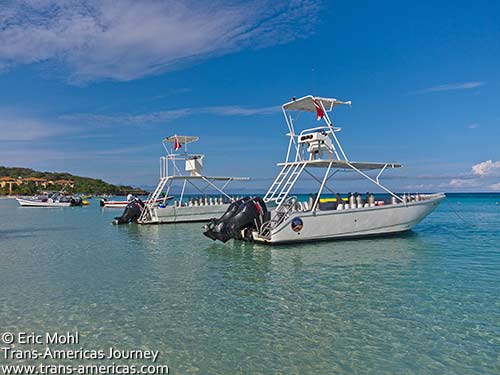 Getting ready to go diving with Mayan Divers on Roatán Island in Honduras.

We had some decent dives with a professional and well-stocked dive shop called Mayan Divers around the El Aquila Wreck and Half Moon Bay Wall where we drifted lazily with turtles and barracuda. Their dive masters and very comfortable dive boat made the day even better.

On the East End of the island we also did some diving with Subway Watersports, a PADI 5-Star shop that operates out of the not-fancy but surprisingly charming Turquoise Bay Resort. Though it could use a coat of paint, the food was good and we were charmed by the simple rooms each with its own marine theme.

The standout site on this side of the island was a place called Dolphin’s Den, a shallow-water cave where six dolphins became trapped and died a few years ago. What seemed like millions of fish undulated through sun-dappled water in the confined space. 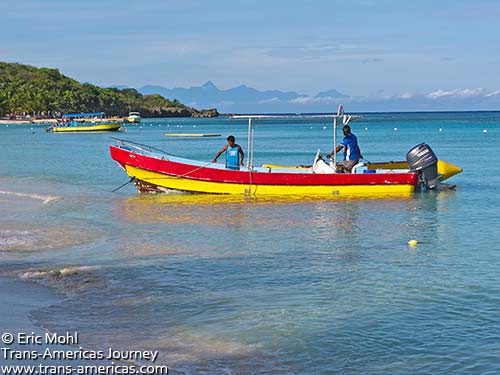 And Roatán is the only island we’ve ever been on where you can go down in a homemade submarine. Karl Stanley built a submarine, named it IDABEL and now takes passengers with him into the deep. He’ll take you down to 2,000 feet (600 meters) if you want…

Perhaps the thing we liked best about Roatán is that in 2011 Honduran President Porfirio Lobo Sosa created a permanent shark sanctuary that encompasses 92,665 square miles (240,000 square kilometers) of Honduran waters, including Roatán, and aims to reduce the number of sharks killed each year.

Oh, and something else on the plus side? The town near the ferry terminal on Roatán is called Coxen Hole. Yep. 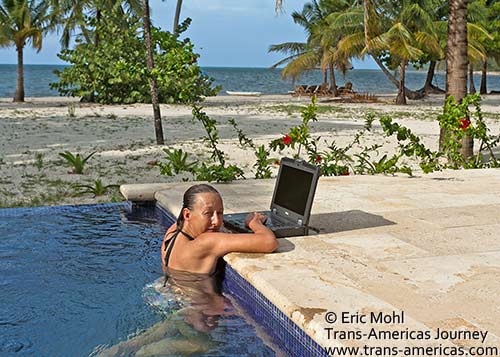 Karen’s cool office at Palmetto Bay Resort on the quiet side of Roatán Island. 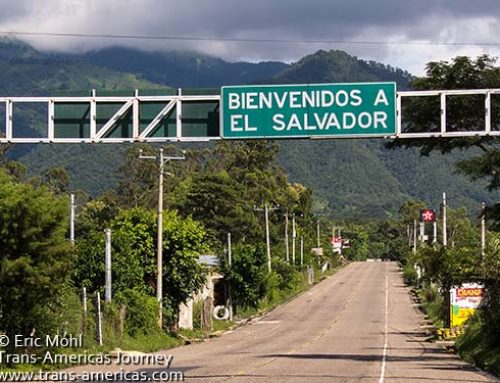 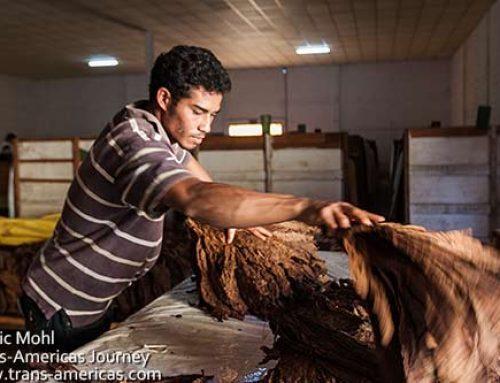 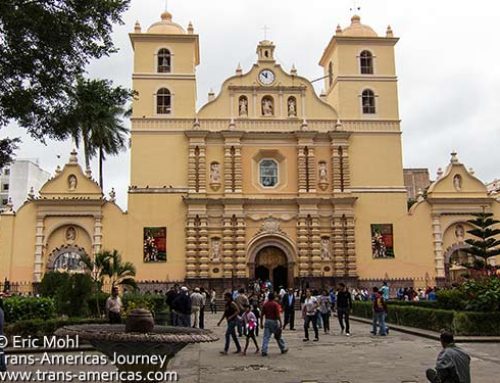 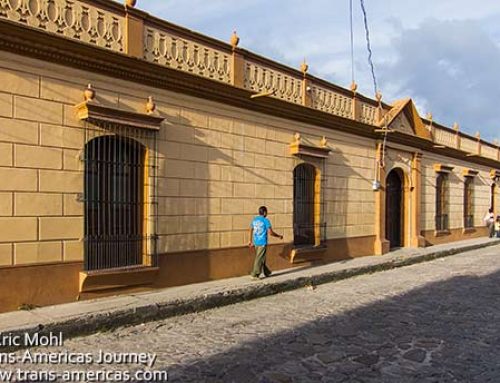 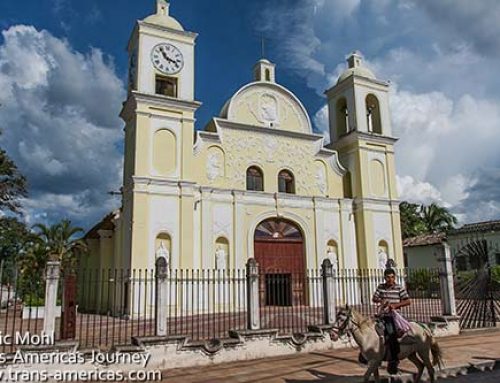 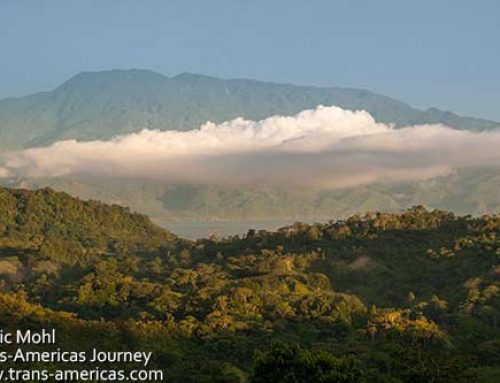 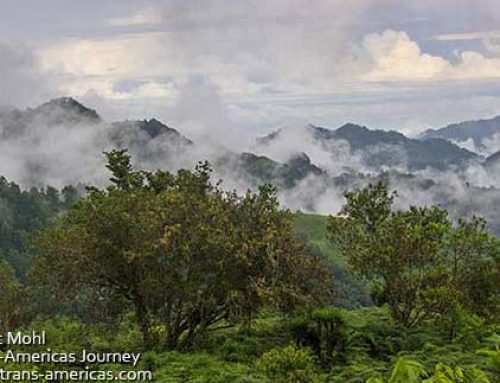 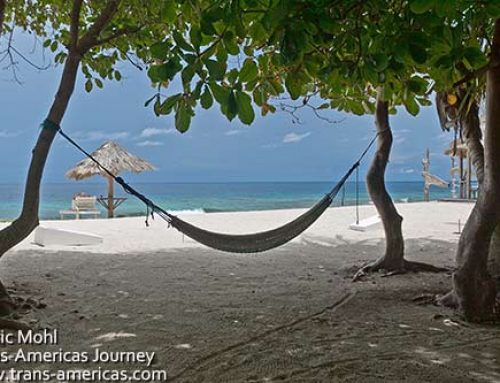 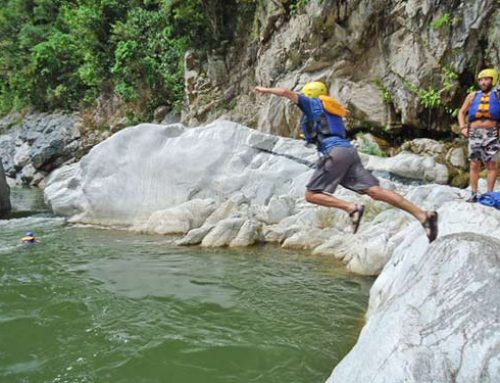