Of course it feels weird to walk into an abandoned salt mine and descend hundreds of feet below the surface of the earth to look at religious iconography and arty interpretations of the stations of the cross placed inside alcoves dug out of sparkly, salty walls but, hey, that’s why the Salt Cathedral in Zipaquirá, Colombia isn’t just be another church. 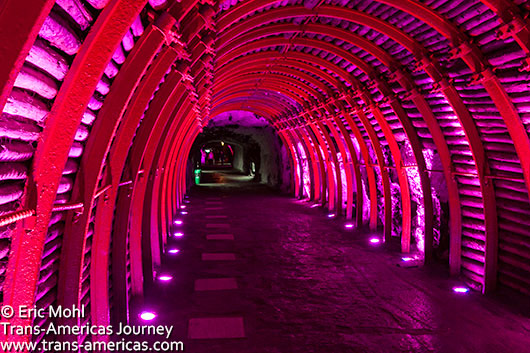 The tunnel walkway that leads into the Salt Cathedral in Colombia.

Inside the underground Salt Cathedral

About 30 miles (48 km) from Bogotá is the town of Zipaquirá which is known for its salt mines and for being one of the earliest inhabited settlements in the Americas (human bone fragments found here have been carbon dated to more than 12,000 years old). In the 1950s one of the salt mines was abandoned and a small altar that workers had created inside the mine as a spot to pause and pray for safety during their dangerous work day, was expanded to create the first incarnation of the salt cathedral. 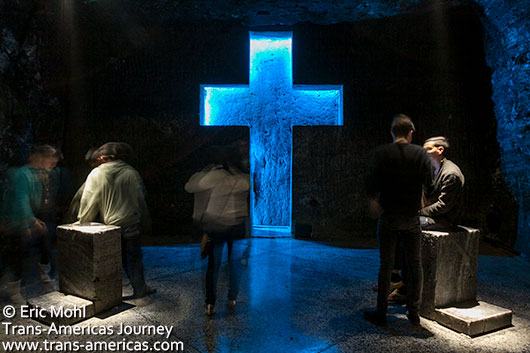 Each of the stations of the cross are depicted through modern, minimalist carvings in the salt-infused walls of an abandoned salt mine that’s been turned into a church and tourist destination in Colombia.

It wasn’t structurally sound, however, and in 1991 it was shut down. After four years of fortification and new construction the much lager, much deeper Catedral de Sal (Salt Cathedral) was re-opened. 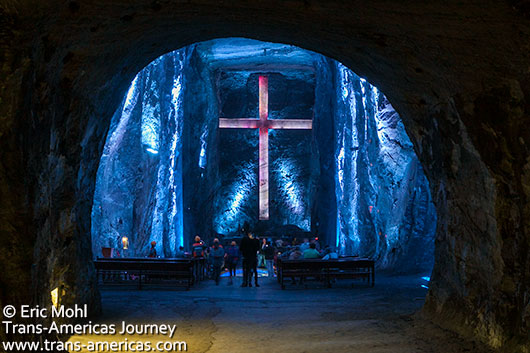 The devout wander deep underground to celebrate Sunday mass at this church carved out of the walls of an abandoned salt mine.

Today the Salt Cathedral (25,000 COP/about US$7.50 per adult and 17,000/about US$5 per child) is a sprawling maze of wide, tall tunnels with finished floors and dim moody lighting that wind underground past minimalist depictions of the stations of cross installed in 14 small naves carved out of the sparkly, salty earth. As you wander deeper and deeper, a soundtrack of Gregorian chants, Ave Maria and something that sounds disturbingly like a cave-in plays quietly through unseen speakers. 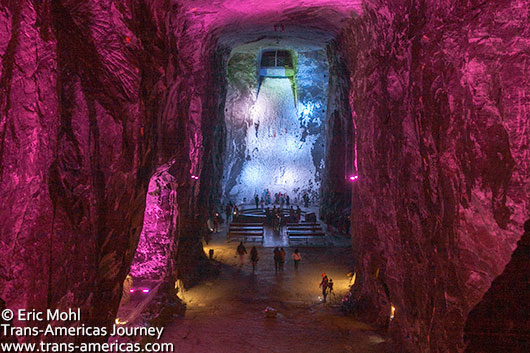 That white cascade on the far wall of this underground church is solid salt.

At the deepest point, around 600 feet (180 meters) underground, there’s a full church with three naves where Catholic services are held on Sundays for thousands of the devout. Yeah, you can celebrate mass in a mine, just remember that the Salt Cathedral has no bishop and, therefore, is not officially recognized as a cathedral. 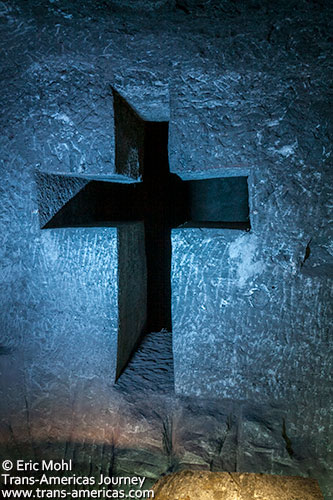 One of the stations of the cross on display deep underground at the Salt Cathedral in Colombia.

Beyond the church you’ll find a huge gift shop and a theater where a sound and light show is put on. The whole subterranean experience takes about two hours. A guided tour is English is offered four times a day.

Outside, on the surface of the earth where humans belong, there’s a climbing wall, a small maze for kids, snack stalls, a playground and, of course, a museum of mining all adding to the overall theme-parky feel of the place. 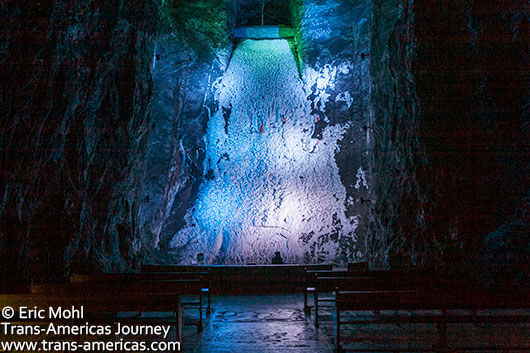 A salt flow deep underground at the Salt Cathedral in Colombia is testament to the fact that what is now used as a church used to be an active salt mine.

Travel tip: A company called Turistren runs a vintage steam train from Bogotá to Zipaquirá on Saturdays, Sundays and holidays (from 52,000 COP/about US$15 per adult and 43,000 COP/about US$12 per child under 12 round trip). They operate this trip with a diesel train engine too, so if you have your heart set on a steam engine experience confirm when you book your ticket.