San Jose, Costa Rica gets a bad rap. Sure, some of the capital city’s once-grand architecture has seen better days and the streets can get jammed up and there are still some seedy spots. But while most travelers land at San Jose’s airport and high tail it to the country’s beaches, jungles, and volcanoes, we spent more than a month (off and on) in San Jose during the course of our five months in Costa Rica. The city grew on us and we ultimately found 17 reasons (from boutique hotels to roller derby girls to iconic ice cream) not to blow off the country’s largest city. Get it all in our San Jose travel guide. 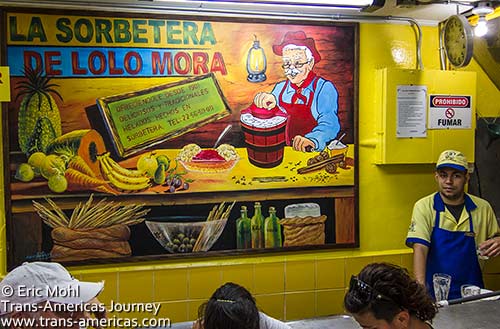 Delicious, custardy ice cream has been made and sold at this Central Market stand in San Jose, Costa Rica for more than 100 years.

1. Egg nog ice cream – Okay, it wasn’t meant to taste like egg nog, but the frozen treat that’s been sold at La Sorbetera de Lolo Mora in San Jose’s 130-year-old Central Market for more than 100 years nails it with nutmeg, cinnamon, clove, and rich, custardy goodness. It’s even the same color as egg nog. Locals like it even more with (shrug) cubes of red Jell-O in it.

2. Mouthwatering soup – In the Central Market annex, across the street from the main market building, wander around until you find a tiny eatery called Mariscos Poseidon. Sit down. Order the seafood soup (about US$2). You’re welcome. 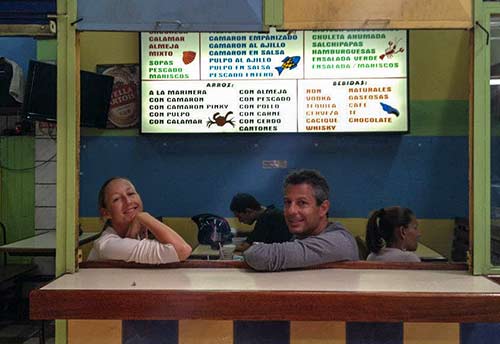 3. Best bargain bed and breakfast – At US$30 for a clean and comfortable double room with a pristine shared bath, WiFi, cable TV, free parking, and the largest, most varied, and most deliciously fresh free breakfast buffet in Central America you simply can’t beat Hotel Aranjuez, about a 10-minute walk from the city center. It’s not the cheapest place to stay in San Jose but we believe it’s the best value for money. Reservations are a must.
Book Now

4. Cool design on display – The Contemporary Art & Design Museum (Museo de Arte y Diseño Contemporáneo in Spanish) is located in a former distillery so it’s got the requisite hip warehouse vibe. Mixed media installations rotate regularly and the whole place feels a bit like a loft gallery in Brooklyn (US$3, free to all on Mondays).

5. Bikers on a mission – Roberto and Ayal started ChepeCletas (a combination of chepe, slang for downtown San Jose, and cleta which is Spanish for bike cleat) as a campaign to have fewer cars and more bikes in the city center. It quickly morphed into a crusade to reinvent and revitalize San José for locals and for travelers. ChepeCletas now offers tours of the city (day and night) on bikes or on foot. Tours are lead by locals with insights and personal history in the city. These “guides” share fascinating little-known facts and anecdotes that bring San Jose to life.

6. Great graffiti – Street artists in San Jose have taken graffiti to a new level and many walls around town are enlivened by a variety of styles. 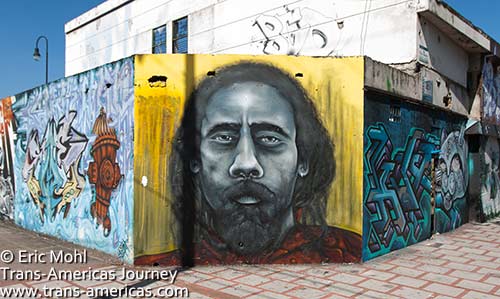 7. Italian hotel style – San Jose has hostels up the ying-yang. It has international chain hotels. It even has interesting locally-owned B&Bs and business class hotels, including the Hotel Presidente. What’s been missing is a central, reasonably priced boutique hotel. That is until Mansion del Parque Bolivar Hotel opened in early 2012. Italian owned (and it shows), this former mansion is now a 5-room retreat featuring free European style breakfast on the patio. Check out our full review.
Book Now

8. Roller derby girls – They go by the name Panties Dinamita (Dynamite Panties) and they entered the roller derby ring in early 2011 with all the usual trappings including tattoos, dyed hair, and playfully bad attitudes. You’re welcome to watch practice sessions as well as scheduled battles against the two other roller derby teams in Costa Rica. 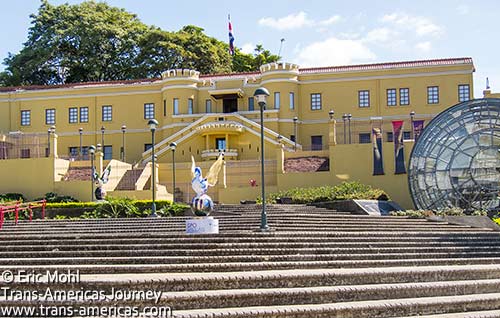 The National Museum of Costa Rica in San José.

9. Site of the military’s last stand – Costa Rica hasn’t had a military since it was disbanded by President José María Hipólito Figueres Ferrer in 1948. The site where that historic proclamation was made, ironically a former military fort, is now the National Museum of Costa Rica (Museo Nacional de Costa Rica in Spanish). It’s a great place to get a taste of everything from ancient art, to pre-Columbian gold (unless you’re a gold freak skip the Costa Rica Gold Museum which is just plain overwhelming and costs US$11 to get in to) to mysterious huge round stones to amazingly ornate matates (grinding stones) like we’ve never seen before. It’s all displayed in a peaceful setting which includes a huge butterfly enclosure (US$8). 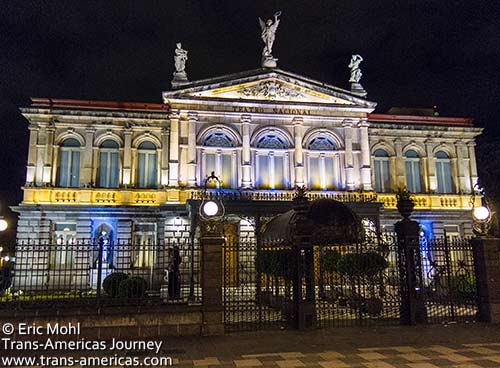 The National Theater of Costa Rica, opened in 1897, was modeled on the Paris Opera House.

10. Culture on the cheap – The National Theater of Costa Rica (Teatro Nacional de Costa Rica in Spanish), in downtown San José, was modeled on the Paris Opera House and it’s an eye-popper with sculptures, paintings and furnishings that seem straight out of, well, Paris. And that was the idea. Opened in 1897, the theater was built in grand style with money generated by a controversial tax on coffee. Initially, it was meant exclusively for Costa Rica’s elite. These days an excellent, 1-hour, info-filled guided tour is available (US$7 per person) and on most Tuesdays the theater hosts “Theater at Noon”–short performances by world-class performers for less than US$5.

Inside the opulent National Theater of Costa Rica in San Jose.

11. Sunday strolling – Every Sunday, San Jose’s main drag, Paseo Colon which connects downtown with the city’s largest park, is closed to traffic and turned into a pedestrian street that attracts families and couples. It’s a great idea and a relaxing way to mingle with city residents. 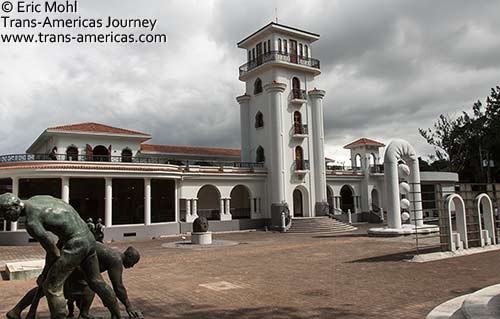 13. Happening eats – La Esquina Buenos Aires restaurant serves up fantastic beef (and pasta and fish), the most affordable glass of wine in the city (US$5 for a massive pour of the restaurant’s house red or house white), and has knowledgeable and accommodating waiters. No wonder La Esquina is buzzing with locals and visitors mingling at the festive bar and lingering over tables most nights.

14. Chic shopping – eÑe boutique, right around the corner from Mansion del Parque Bolivar Hotel, is one of the chicest shops in San Jose (look for the very cool red neon Ñ in the window at 7th Avenue and 13th Street). Everything they sell is locally designed and made including cool tees, handmade leather bags, retro dresses, playful jewelry, stylish journals and notebooks, and more. 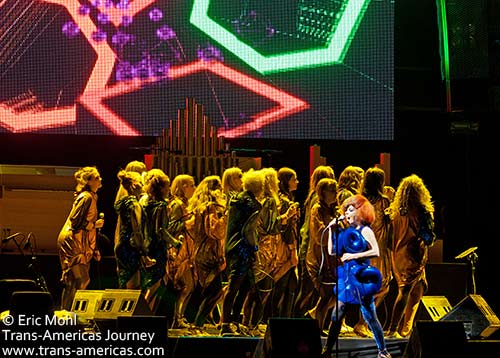 15. Live music – Anyone who knows us knows that live music is one of the things we miss most from our former lives as New Yorkers. It’s been a struggle finding concerts, live music, and music festivals since moving south of Mexico but in San Jose, we were pleasantly surprised by the booming live music scene. We had a great time at the 2-day Festival Imperial featuring Bjork, Cypress Hill, Gogol Bordello, Moby, LMFAO, TV on the Radio, and more. 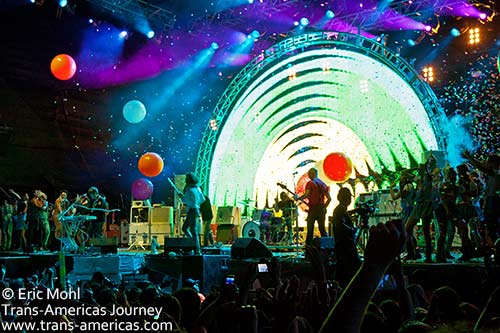 The Flaming Lips during Day 1 of Festival Imperial 2012 in San Jose, Costa Rica.

16. Presidential tree –  In 1963 US President John F. Kennedy planted a ceiba tree on the manicured grounds of the Ministry of Foreign Affairs (also called Casa Amarilla). Sadly, it had to be cut down but you can still see the spot where it used to stand. 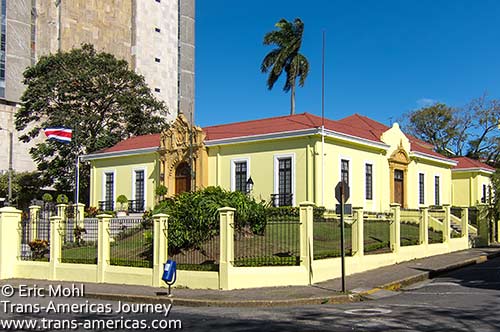 US President John F. Kennedy planted a ceiba tree in that corner of the grounds in front of the Foreign Ministry in San Jose, Costa Rica. Sadly, it had to be cut down.

17. The weather – At nearly 4,000 feet (1,200 meters) above sea level temps are more moderate in San Jose than in most other steamy places in the country. It was nice to break out the jeans.

San Jose sprawls a bit like Los Angeles does with self-contained mini-city suburbs all around the downtown area. If you’ve got your own wheels and want to experience the chic, modern suburbs of Escazu and Santa Ana we highly recommend Casa de Las Tias where flawless hosts Xavier and Pilar will get you settled into one of their seven homey rooms. Breakfast in their gorgeous garden (included) is NOT to be missed.  Or splash out at minimalist Casa Cristal, a romantic hideaway with expansive views down the valley to central San José.

Either way, eat at DaMarco Italian Restaurant in Santa Ana. When we asked the Italian owner of Mansion Parque del Bolivar Hotel where the best Italian food in Costa Rica was this is where he sent us and it did not disappoint. The chef, from Verona, turns out freshly baked focaccia and homemade pasta (the seafood tagliatelle rocked when drizzled with house spiked chili oil), nine different types of risotto, fish dishes, meat dishes, and more along with a wide-ranging wine list.

And then there’s 8ctavo Rooftop Restaurant & Lounge which was opened by our friend Mike and on top of the new Sonesta Hotel & Casino in Escazu.