The charms of San Luis Potosi are more subtle than those of many other cities in Mexico, but there are charms nonetheless. You just have to get past the clowns. Find out how in our San Luis Potosi travel guide.

Museo Regional Potosino is housed in what was originally part of a Franciscan monastery which was founded in 1590.

What to do in San Luis Potosi, Mexico

Much of the central downtown area of San Luis Potosi is either a car-free pedestrian mall or a lovely leafy plaza anchored by a church which makes strolling around this city a joy. And while every Mexican city has plazas and churches, San Luis Potosi has more than its fair share which gives the city a garden-town feel. 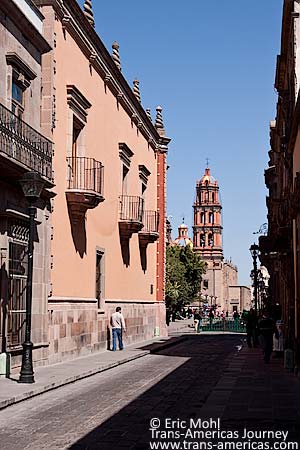 San Luis Potosi has a lot of pedestrian-only streets. This one leads to the cathedral. 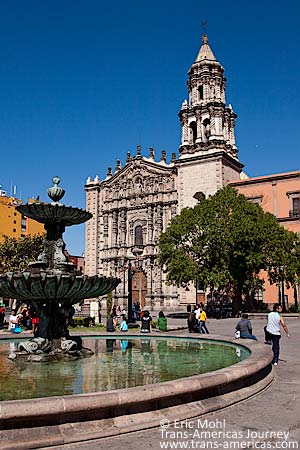 Plaza del Carmen, one of many tranquil squares in San Luis Potosi.

With such lovely places to congregate, it’s not surprising that a good deal of life in San Luis Potosi takes place on the streets and in the plazas, disturbed only by a preponderance of clowns which give Karen the heeby-jeebies. 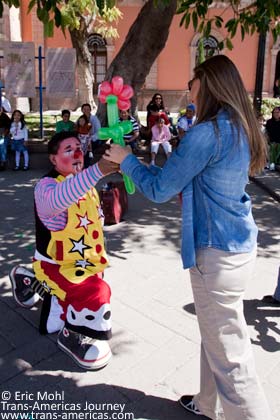 Karen is force to face her fears after getting roped into a street performance by a clown.

Maybe they can smell her fear because one persistent clown roped Karen into his schtick and wouldn’t set her free until he’d given her a balloon flower. Which would be sweet except for the creepy shoes and fake sad makeup.

Where to eat in San Luis Potosi, Mexico

San Luis Potosi also has more than its share of high-end restaurants tand the city lays claim to some everyday edible attractions as well such as enchiladas posotinos and an extremely tasty take on traditional pozole which is pleasingly heavy on the cilantro. We enjoyed both dishes at a comfortable and affordable restaurant called El Pozole which, we are happy to report, is now open until late at night not just until 3:00.

Where to sleep in San Luis Potosi, Mexico

Another thing that San Luis Potosi has that most Mexican cities don’t is a Parisian style hotel. Okay, not really. But Palacio San Agustin Museo Hotel comes as close as you’re gonna get within the borders of Mexico.

The hotel, which claims to be the first “Museum Hotel” in Latin America, is housed in what was a mansion before becoming a kind of guest house for monks and visiting dignitaries associated with the city’s San Agustin monastery in the late 1600s. The hotel’s current owner, a regional big-shot who prefers to remain pretty-much anonymous, bought the property and spent five years (and at least that many millions) amassing a collection of more than 700 certified French antiques. Even the chef is from France, though he’s just of normal age. 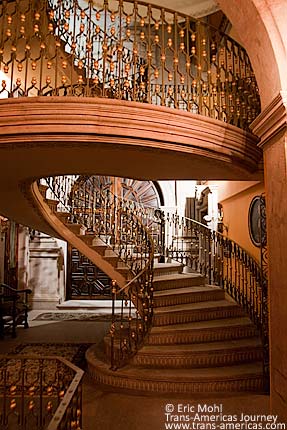 The wonderful staircase in the Palacio San Agustin Museo Hotel.

Local artists were commissioned to copy historical European decorative styles on almost every paintable surface. The owner even added a to-scale replica of the carved stone facade of the San Agustin Temple that’s just down the street and installed it at one end of the lobby floor. Subtle he is not.

The 20 room hotel opened in 2008 (be warned, a couple of the rooms are windowless closets) and, to be honest, the place can be a bit overwhelming, especially when they’re blasting “Flight of the Valkyries” over their excellent hotel-wide sound system. But even if you hate classical music and can’t stand tapestries, you have to be awed by the sheer feat of the place. 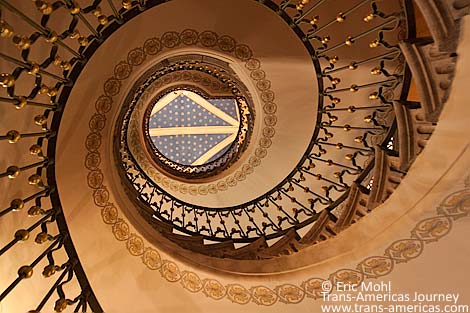 Looking up into the spiral of the wonderful staircase in the  Palacio San Agustin Museo Hotel.

It’s worth signing up for one of the hotel’s guided tours (60 pesos or about US$5)  during which a staff member (English is available) will walk and talk you through the hotel’s fascinating nooks and crannies. Then you get a cocktail.