Instead of sitting around Quetzaltenango (aka Xela) with frozen toes we warmed ourselves up by trekking up to the flanks of the still-active Santiaguito Volcano to pitch a tent and watch her glow. 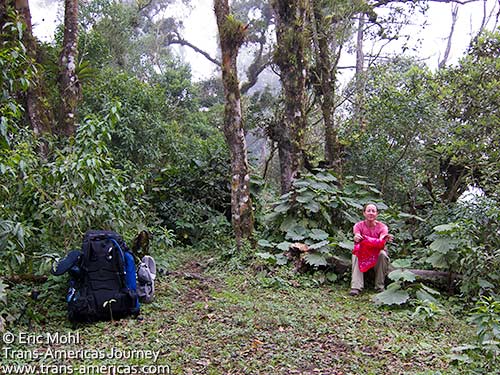 Karen taking a break during the very steep hike up to a view point near the active Santiaguito Volcano in Guatemala.

There are a lot of guides and tour companies in Xela, but we signed up for an overnight trek to watch steam, ash, firey hot rocks, and molten lava spew out of Santiaguito volcano with a volunteer-driven/not-for-profit company called Quetzal Trekkers. They have offices in Guatemala and Nicaragua and their profits are used to support local programs for children.

Quetzal Trekkers is a pleasantly hippie sort of a place that still manages to get professional when it counts. Our guides, Charlotte and Beth, were young and fun but they had the whole two day trip (350Q or US$44 per person) totally buttoned up–from gear (Quetzal Trekkers has a closet full of camping and hiking gear if you need to borrow) to food (which was tasty and plentiful and mostly pre-made in their kitchen).

The hike itself was insanely steep for the first two hours as we snaked our way up through fields, then forest. After that the vegetation thinned out and the trail undulated its way more gradually uphill until we reached an open, slightly sloping hillside. After chasing the cows away, we set up camp for the night. 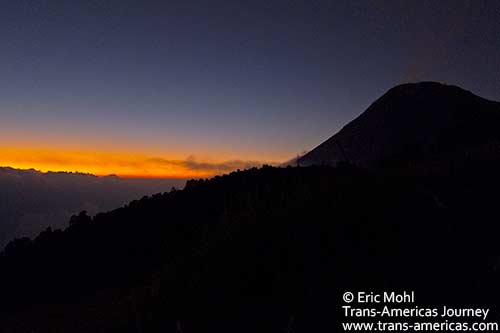 From our campsite we had a wide-open view of the Santa Maria volcano which erupted Mount St. Helens style in 1902. This was one of the most powerful volcanic eruptions of 20th Century and the force completely exploded the flanks of the volcano. In 1922 a side vent developed and became the Santiaguito Volcano. 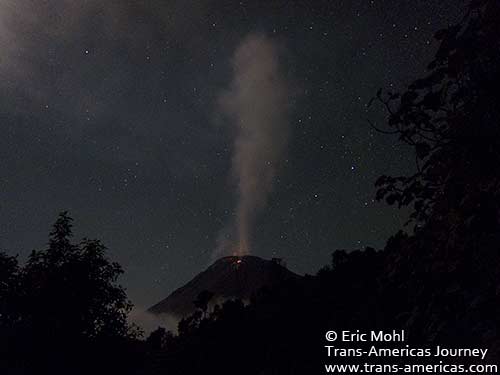 Santiaguito Volcano sends up a plume of steam as we watch from our campsite nearby.

Santiaguito is still a very active volcano. It sputters, puffs and belches almost on cue every hour or so. We all got a bit mesmerized watching smoke slowly rise from vents, hot rocks crash down its flanks, and gooey rivers of lava ooze out here and there. 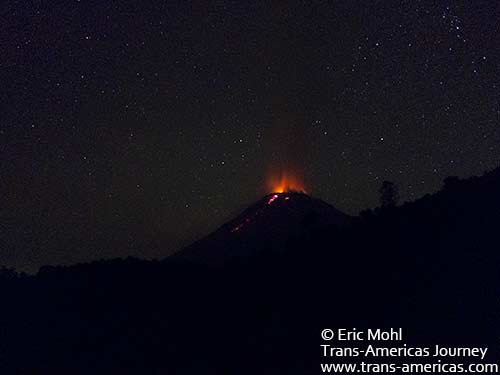 Molten lava inside a fissure in the side of Santiaguito Volcano. 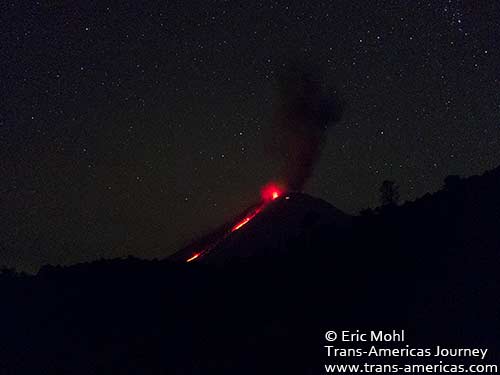 Molten lava inside a fissure in the side of Santiaguito Volcano.

At sunset the sky momentarily turned the same color as the magma. The volcano looked even more dramatic at night when its various random hot spots–like tears in the mountainside–became more visible in the dark. Eric slept outside because he didn’t want to miss any of the dramatic displays. A steady stream of ash looked like snow in the air and sounded like rain when it landed on our tent. By morning everything (including Eric) was covered in gray powder. 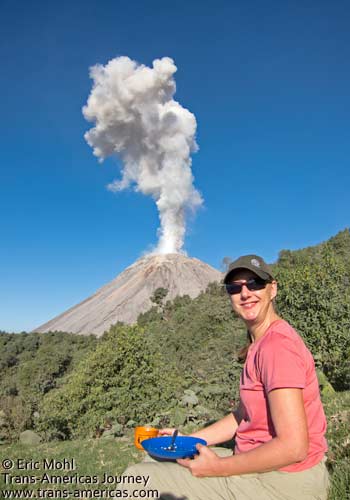 Karen enjoys breakfast with a view from our campsite near Santiaguito Volcano in Guatemala.

The next morning, after sunrise and breakfast with a view, we packed up camp and headed back down the mountain. Before returning to Xela, we stopped at a restaurant and hot spring called El Tunel for lunch and a dip in the water which, sadly, was merely tepid.

Click on this panoramic image, taken from our campsite, to enlarge it. Santa Maria Volcano is to the right and Santiaguito looms near the left hand side. Our merry band of trekkers can be see in the extreme right of the image.

Longing for a real soak, we wanted to visit Fuentes Georginas until we found out that a mud slide had ripped through this series of hot springs pools and cabins, closing the awesome-sounding facility. By the time you read this Fuente Georginas should be open again. 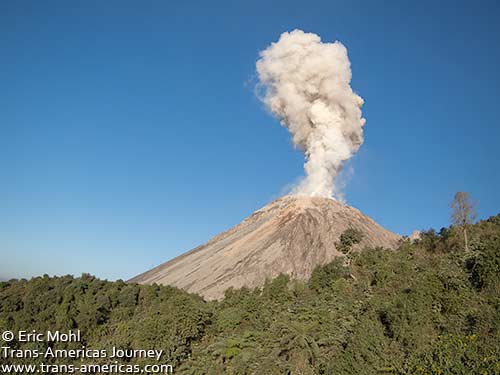 Santiaguito Volcano sends up a plume of steam as we watch from our campsite nearby.

Check out our video, below, to see and hear the volcano at work.

Tip: if you’ve got any camping or hiking gear that you don’t need anymore, donate it to Quetzal Trekkers who will gladly add it to their gear room for other travelers to use and enjoy.